I have an enertion single drive mechanical kit that I had lying around for more than 2 years now and I finally decided to use it again. It had one problem, the belt skips when accelerating/braking to hard, tried to fix that today but nop, it still is the case ! I have the 16T pulley on the motor shaft, it is a Turnigy Aerodrive SK3 - 6374-192KV . I have a Flipsky Dual FSESC4.20 100A but I’m only using one motor, and a 6S 20C 5Ah lipo battery for the moment.

Whenever the belt skip, it does it only one time and then it stops accelerating/braking (it cuts the power), I then have to center the triger and accelerate/brake again, and still if I push it too hard it slips. I don’t know why the power cuts like that, I think it’s from the VESC but what ? Two years ago when I used a hobby ESC it just kept slipping like crazy if I didn’t release the trigger.

I even tried to tension the belt way more than you are supposed to but it still skip !

Here are some pictures : 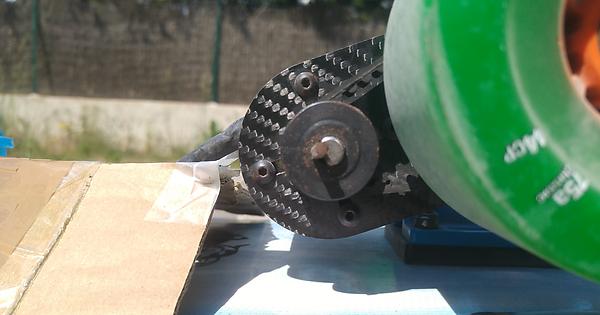 The last pic is a video where the motor is blocked and I apply as much torque as I can on the wheel with my hands, results : the belt skips even by hand (note that I have to put everything I had to do it, but it does skip !) So if it is slipping with my hands, I don’t know how it’s supposed to hold up to a 4000W motor (even though I don’t use more than 1600W because of my configuration).

So is there a problem somewhere or is it just that the kit is bad ? I mean yes there are not a lot of teeths in contact with the belt (on the motor shaft) but If enertion sell such a configuration, it’s supposed to be hold the torque right ?

What is it going to change ? If the two axles get closer it’s just going to engage less teeths on the motor isn’t it ?

Is it possible to show video?

Belt slippage is usual due to over sized belt, too small of a motor pulley (16t is fine), or using 3m tooth profiles. Do you know what belt you use?

Edit: in the picture it does appear to be 5m, just want to make sure.

Thank you so much for your help, Please check the imgur the video is at the very last

It’s hard to see but when the camera shake it skipped. Yes it’s a HTD265-5M, I understand the motor pulley size and tooth profiles but I really don’t get why would belt size be a problem ?

Are you running a 12mm wide belt?

Uh oh… That may be your problem. Im not positive as i dont have hands on you build. Anyway you can try going 15mm?

I use the same setup you have minus the mount and different belt size. Even on 15mm i still get slippage but its only under heavt heavy braking.

By it’s my problem do you mean I bought something that isn’t made to hold up to a lot of torque ?

I’m kind of mad at enertion, they sold it saying it was a good combo with their 2400W motor but it’s not even capable to hold up to such torque.

Diagnosis: I do believe your problem is going to be running a single 12mm belt.

Solution: Uprade to a 15mm setup, have a beer/soda and call me in the morning.

I wouldnt say you bought the wrong thing or even that enertion sold you “shit”. 12mm is fine if youre running a dual setup. But on a single 6374, its a little under par.

By the way, if I tweak the settings of the VESC well, I manage to get a configuration where It doesn’t slip but I was looking for something more “zippy”

My order was a " MONO DRIVE MECH KIT", everything was included, I didn’t buy parts here and there so if it is sold as a mono drive kit it should be able to hold the torque

You can play with throttle curves (for acceleration) and you can adjust your motor negative (battery min i believe) for when braking.

What they wont tell you is, on a single 12mm wide setup, its not par for a single 6374. 12mm is good for running dual. Sinle 15mm will work better. Single 20mm will work great. Follow?

Are you able to post screen shots of your vesc settings?

I’ll see what I do, will give you the vesc settings when I get back, what do you want them for ?

The belt is probably just loose, it needs to be shorter and then it won’t slip.

I tightened it like crazy once but it was still slipping. About shortening the belt, can you please explain me how it’s going to affect the slipping issue ? I really don’t get it

From what I understand if I use a shorter belt the axles will be closer and it’s going to engage less teeths on the motor ?

Oh I meant either moving the motor or shortening the belt if you can’t, if you’ve done that and it’s still slipping I don’t know really… it’s all pretty simple mechanics.

Oh okay ! Well I’ll see what to do but, thank you all for your help !

Are you using a bearing in your wheel pulley? It looks like you are, just to make sure…

Adding a bearing to my wheel pulleys stopped all my skipping problems.