Not gonna skate while standing on it

After three major crash from my board. I decided to put a steering system on and just gonna cruise it on the road. Used some spare time afterwork to build the front end, minimum measurement and eyeball pretty much everything. Also practice my migweld and fab skill(well not good at all as you can see).

End up with this death trap. M12 100mm bolt with two sets of thrust washers, Two wedge plate to create positive caster, thought it could help for straight stability, did a bit but since all the weight is at the back, the caster tends to flip the board than keep the board straight.

The middle nut acts as steering damper as I can tighten the thrust washers down, the bottom one holds the truck. 18mm socket on the top of the bolt, then some linkage to the truck itself so that im not just turning the bolt but the actual truck. Of course, it’s a sloppy build and I want it to be detachable so hose clamps are used.

3/8 uni joint and extension and a T bar as steering wheel, as an apprentice, slap my tools on it and make it work is the goal.

Because the play in the steering setup and the turning ratio is basically 1:1, the front end is just too sensitive and dangerous. I mean real dangerous. So a flat bar clamps to the linkage and makes it a leg-turning board. Well it works and does sick skid.

Made rear truck bushes as soild as possible so it doesnt bump steer and kill me that quick.

Will get a proper steering wheel for it, though still turn it with legs. 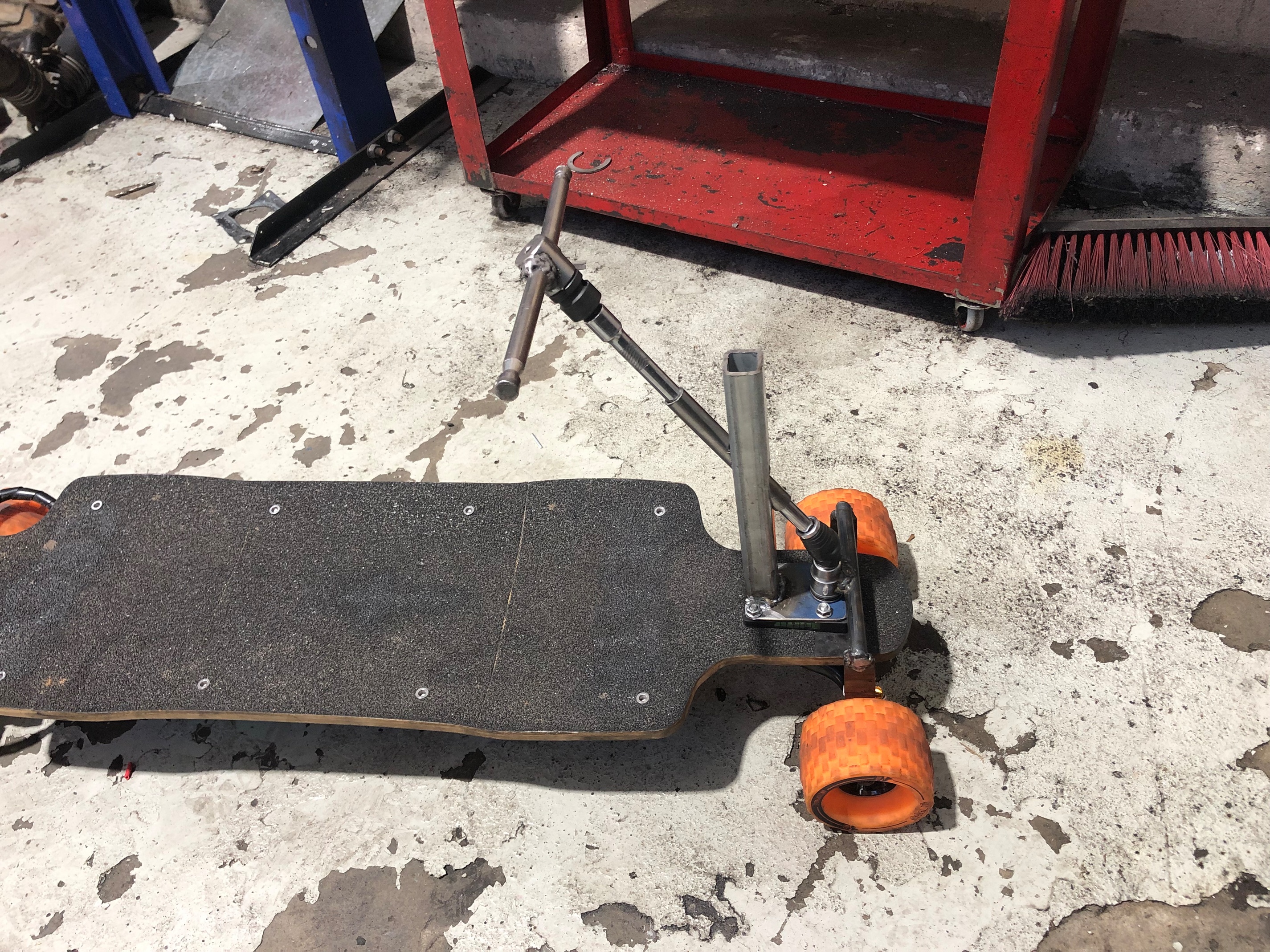 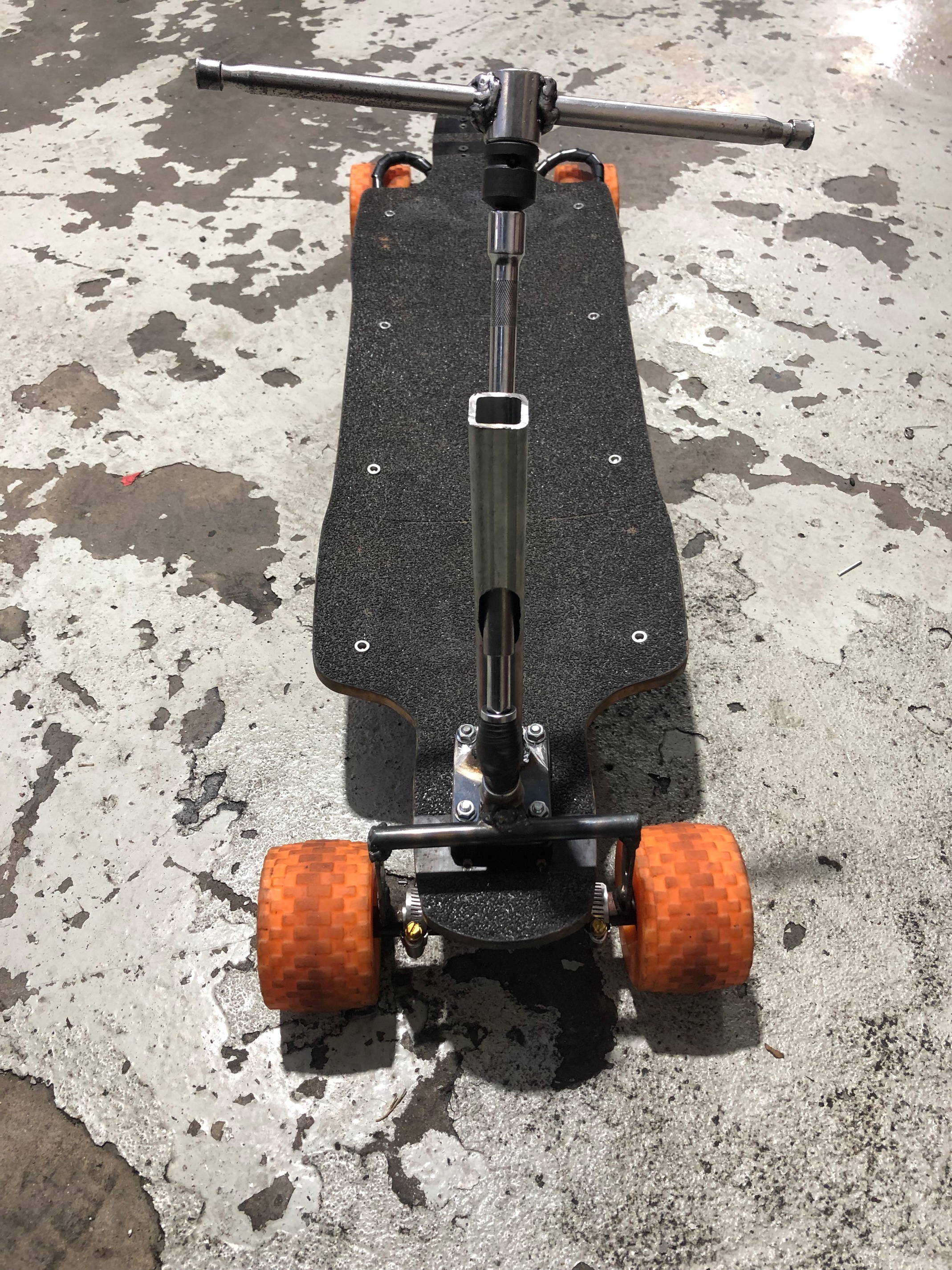 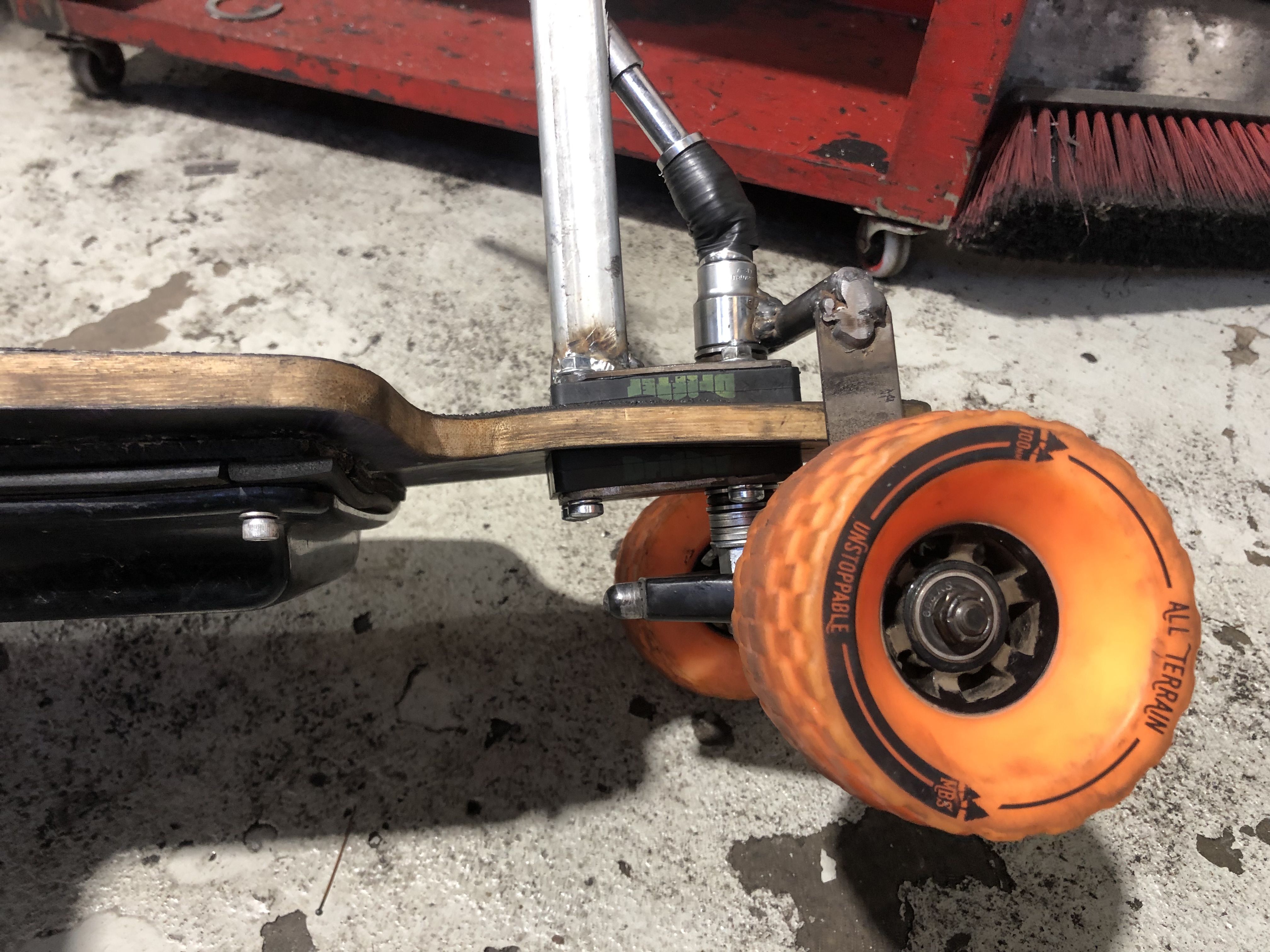 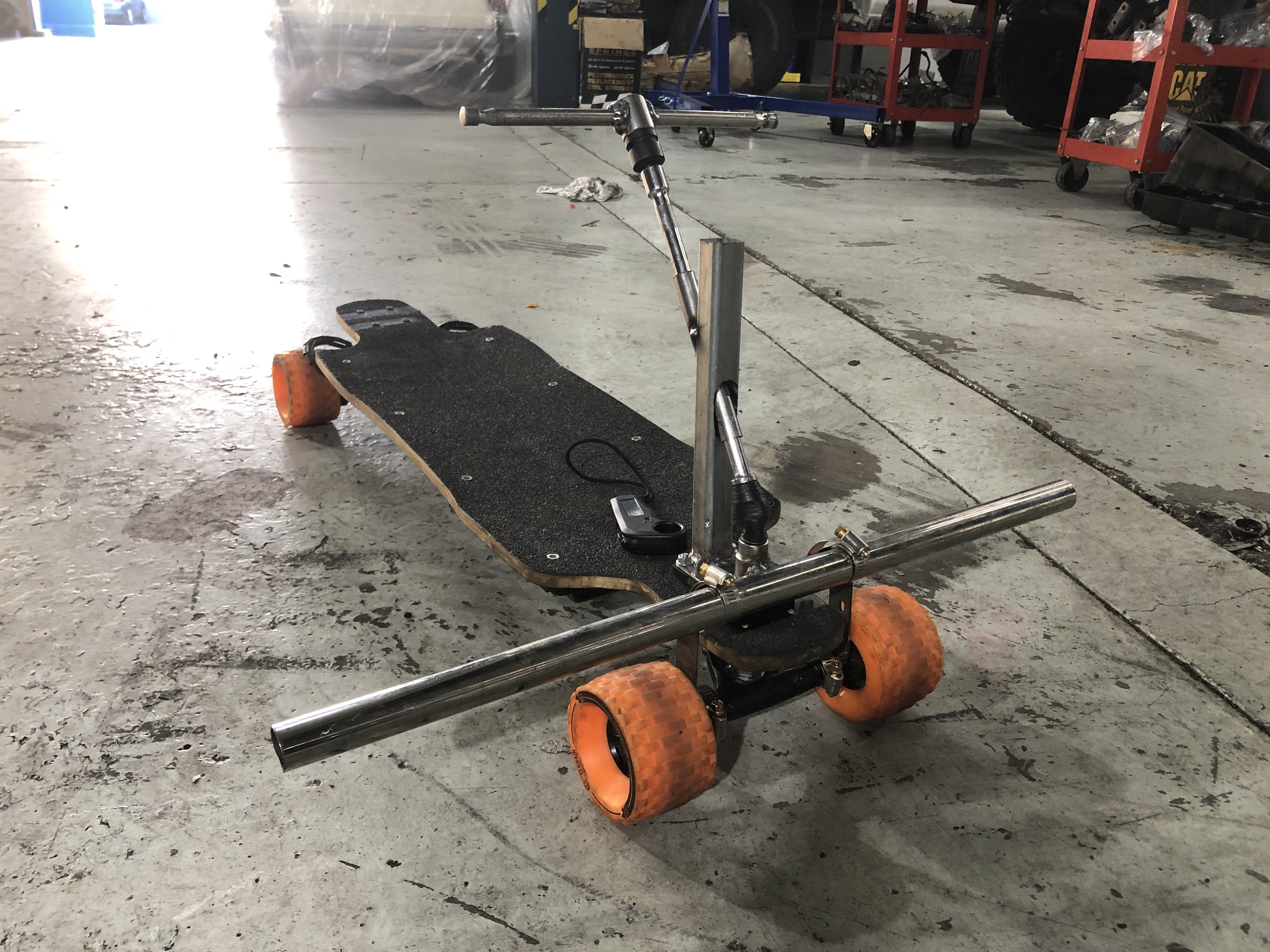 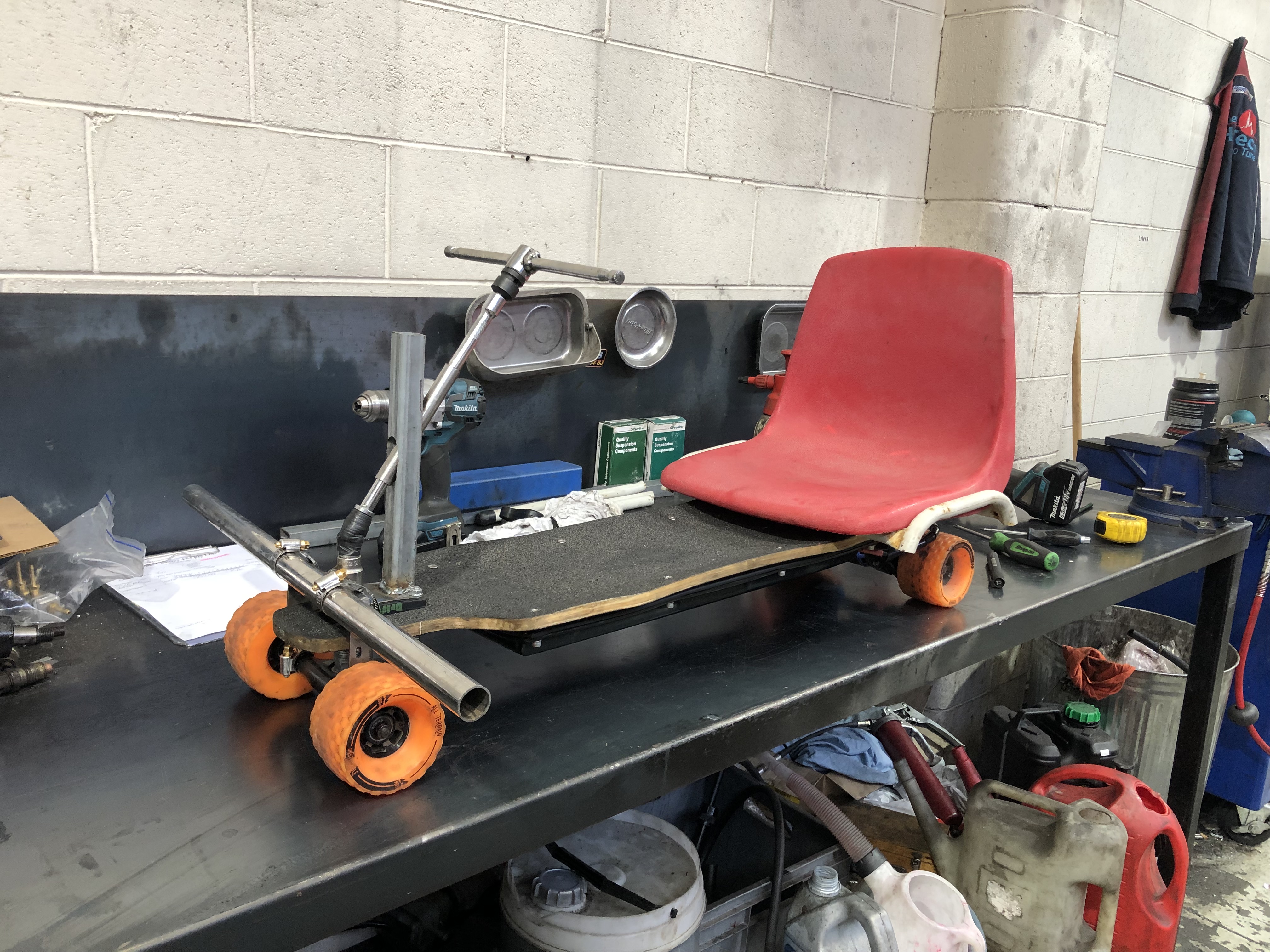 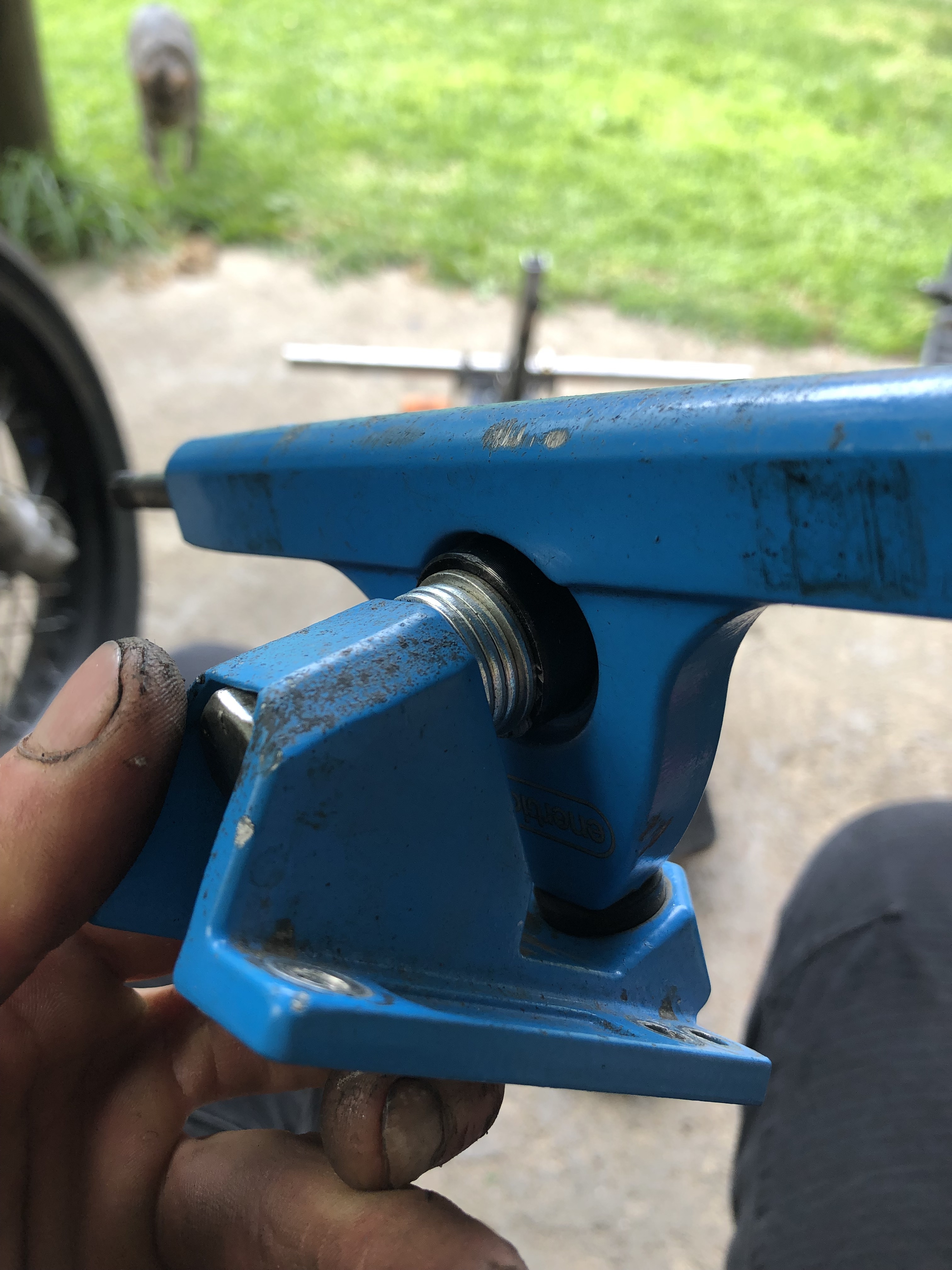 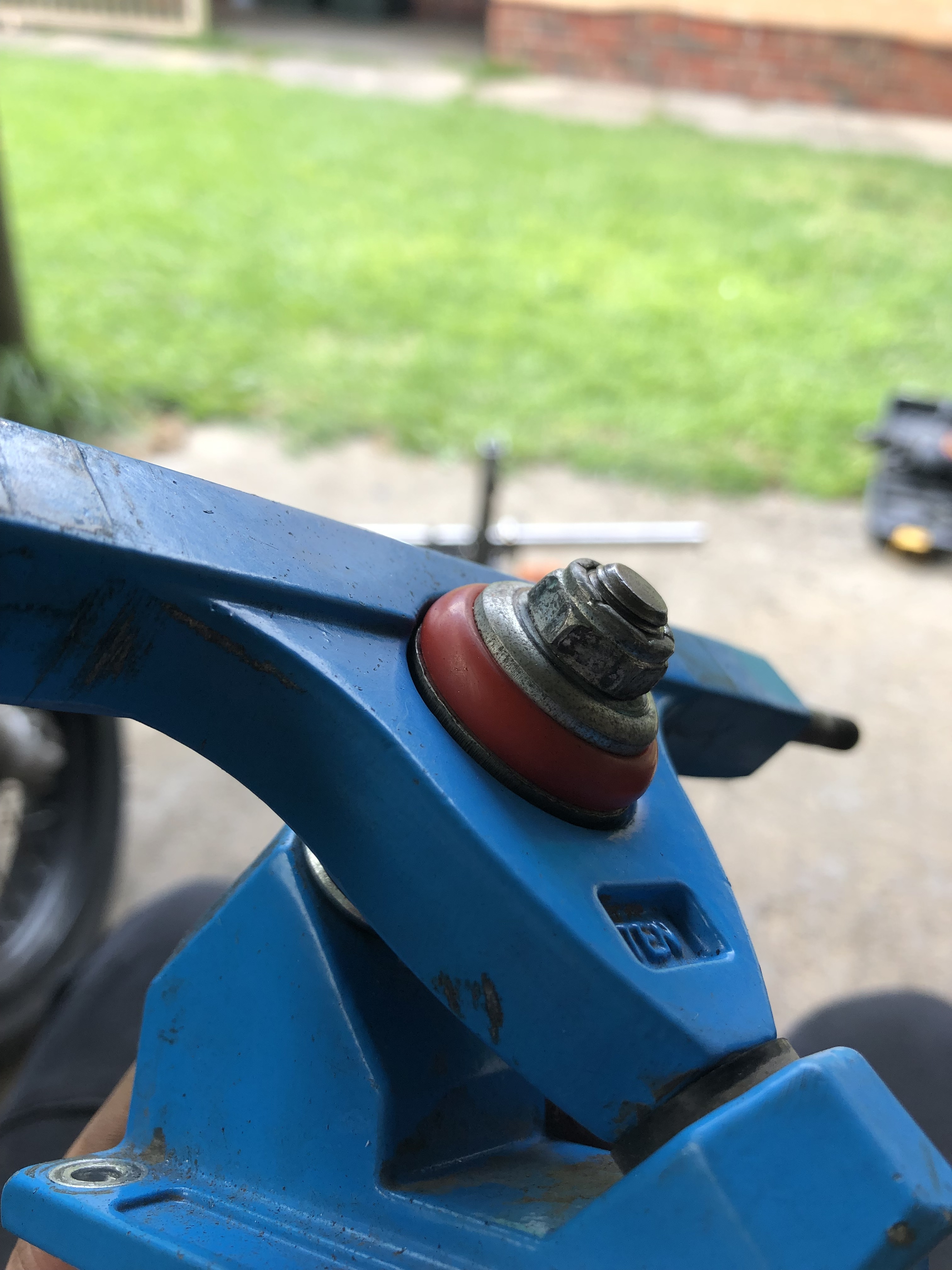 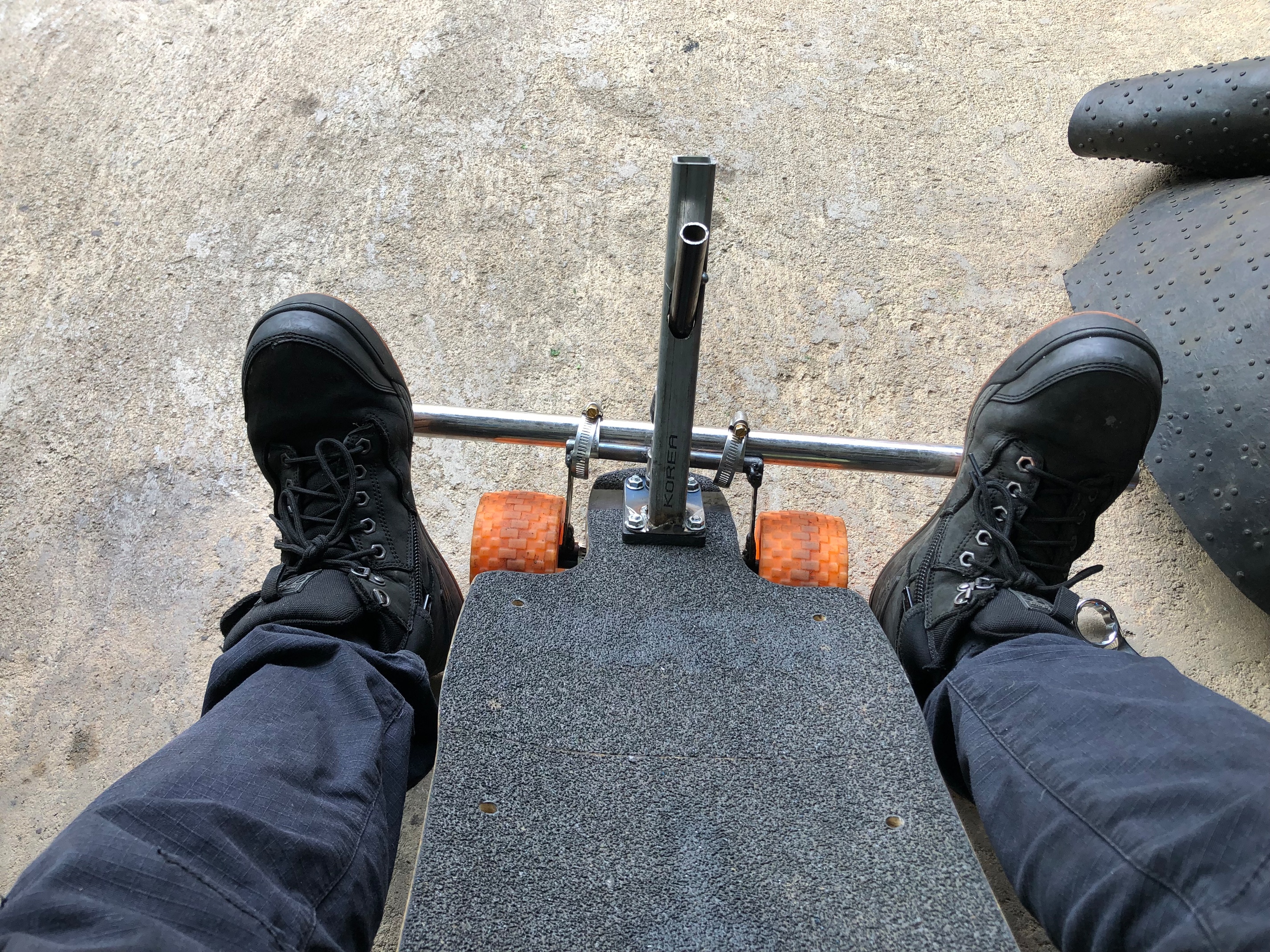 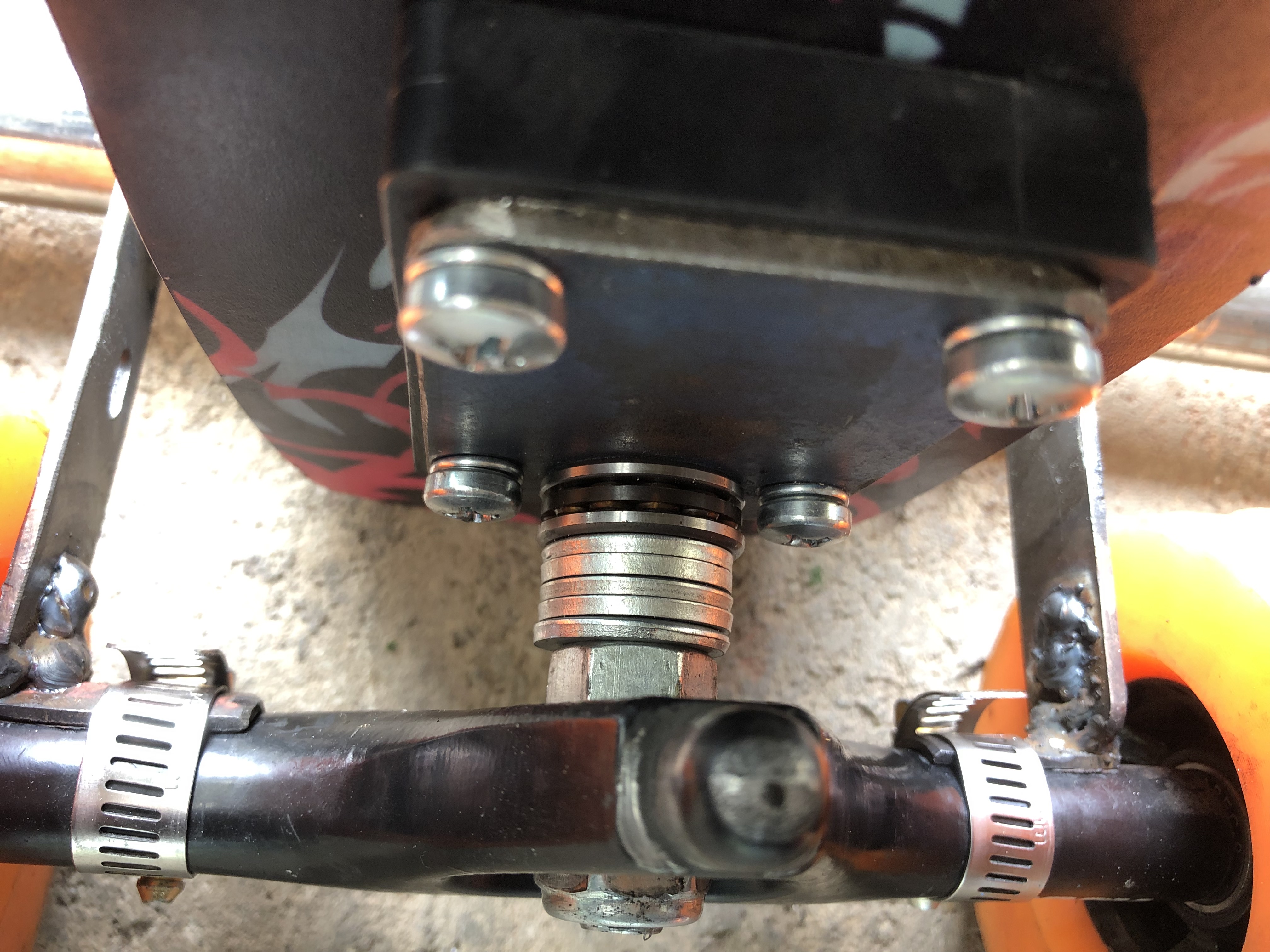 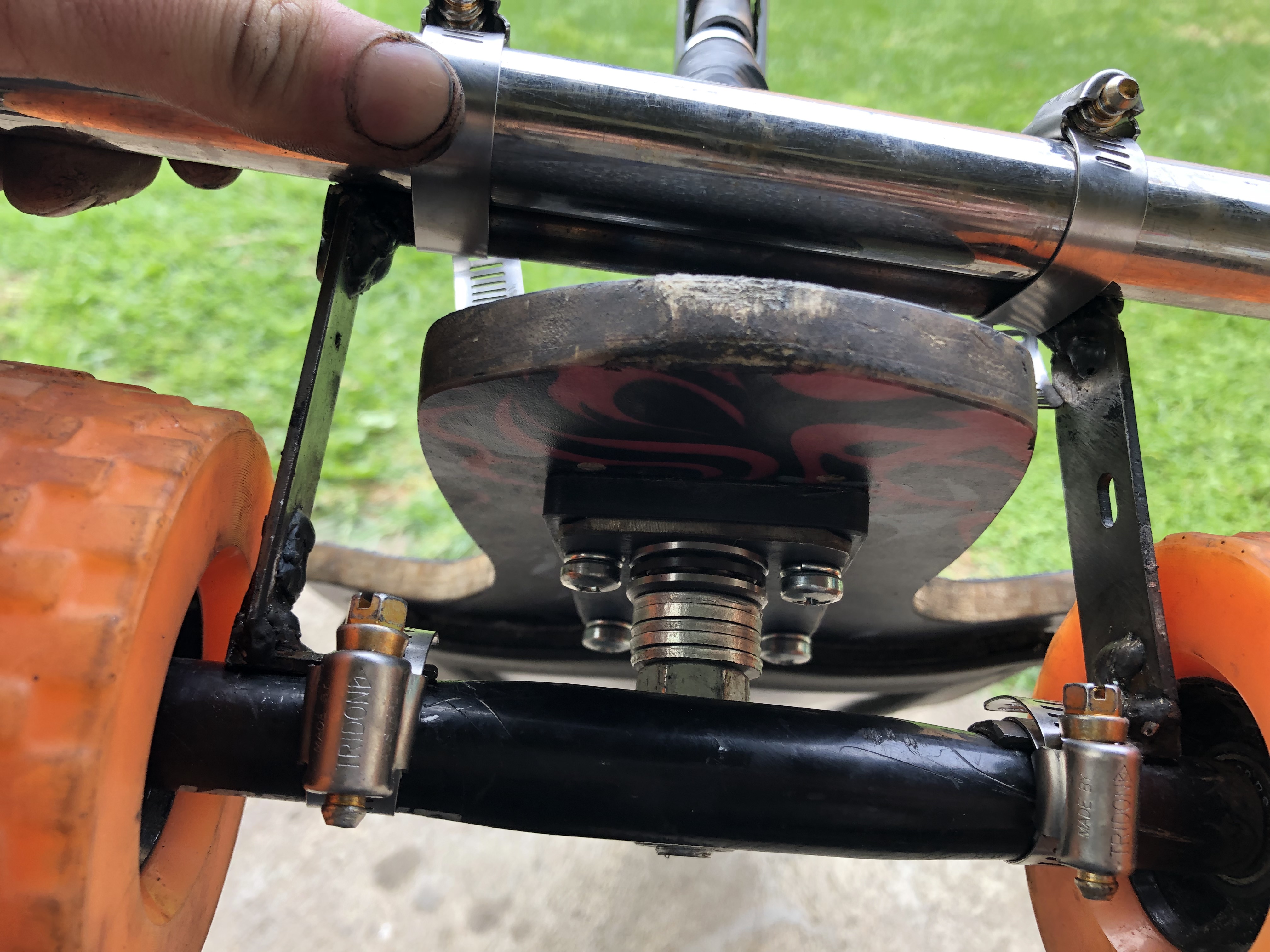 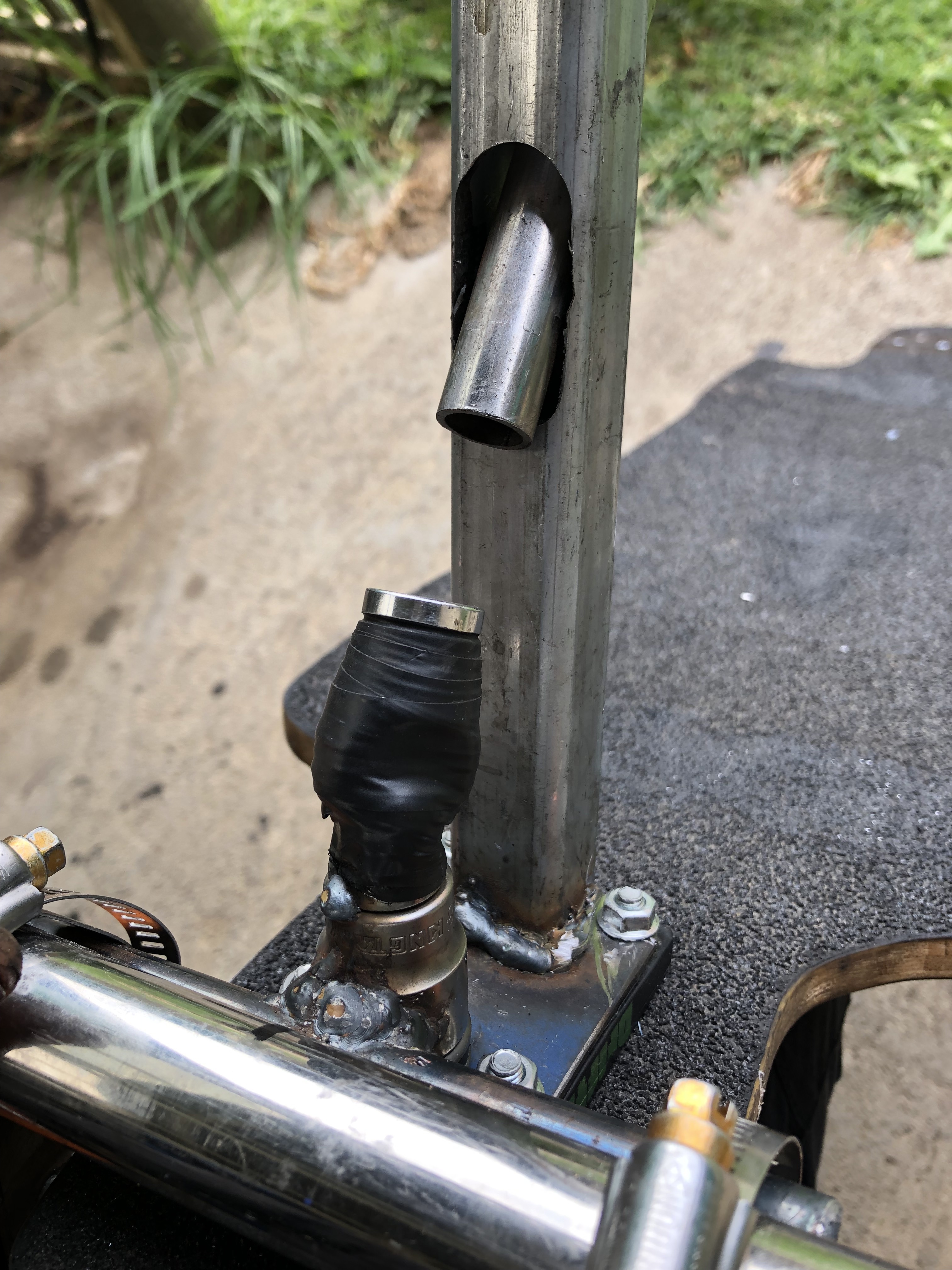 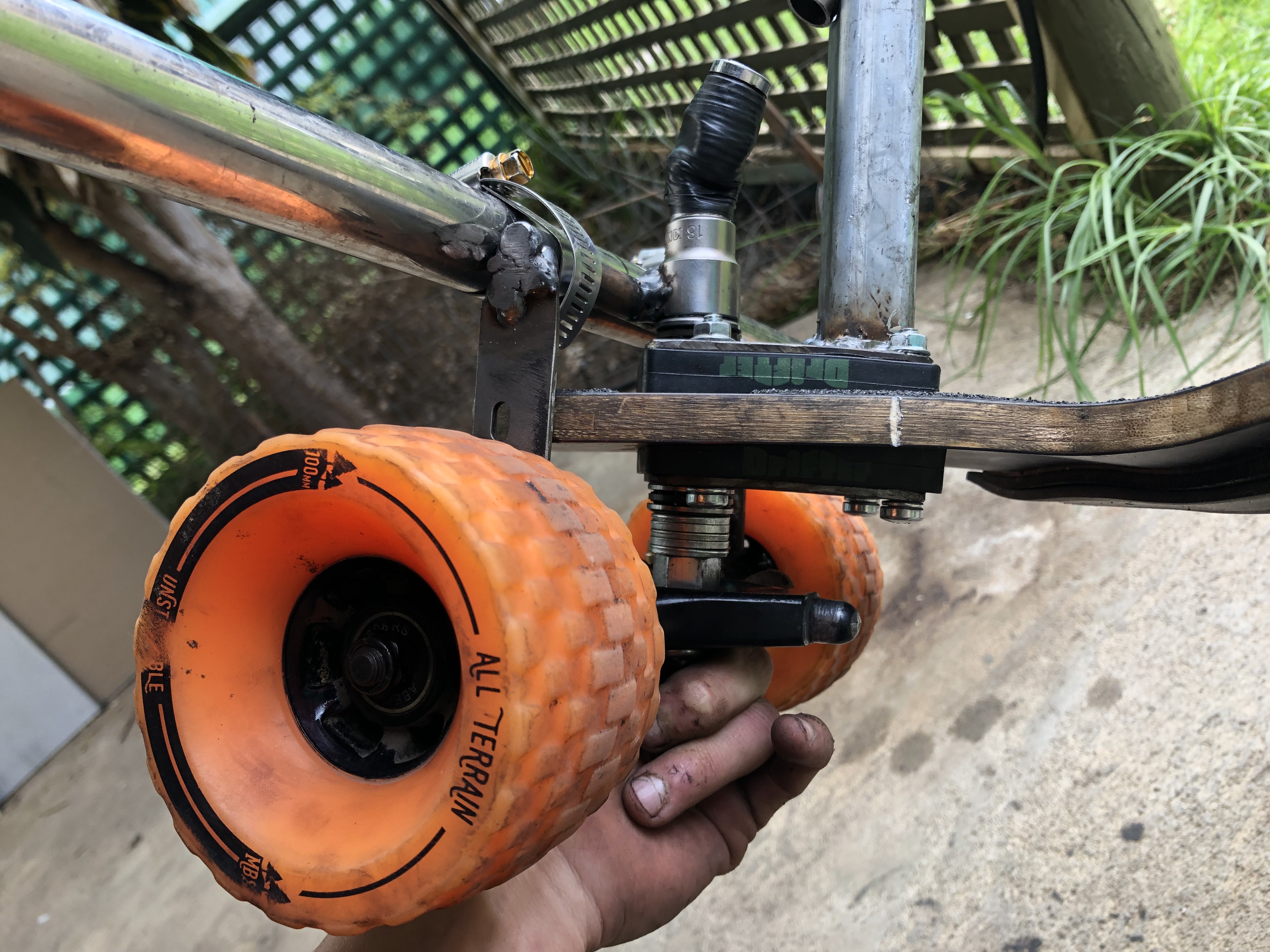 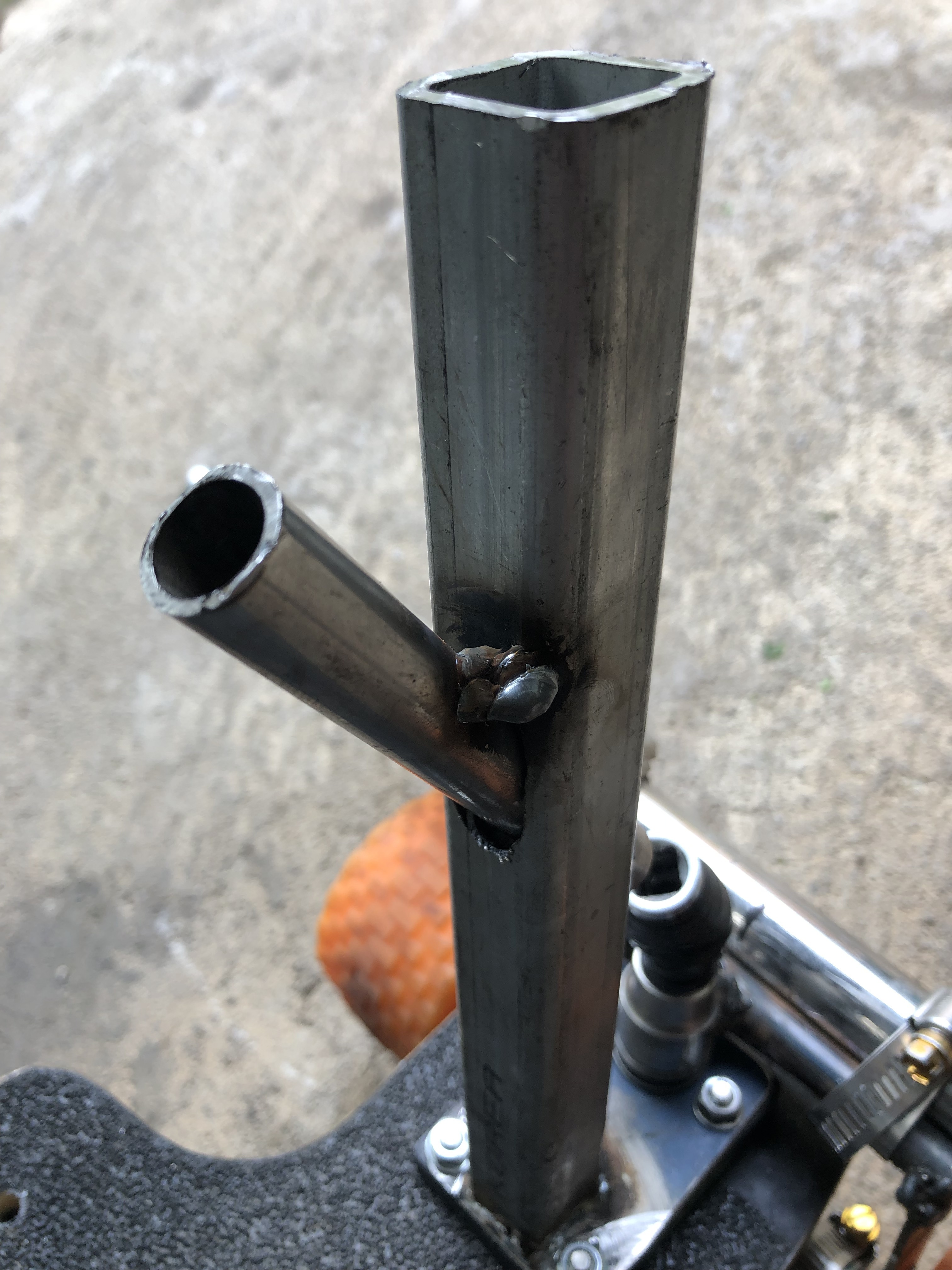 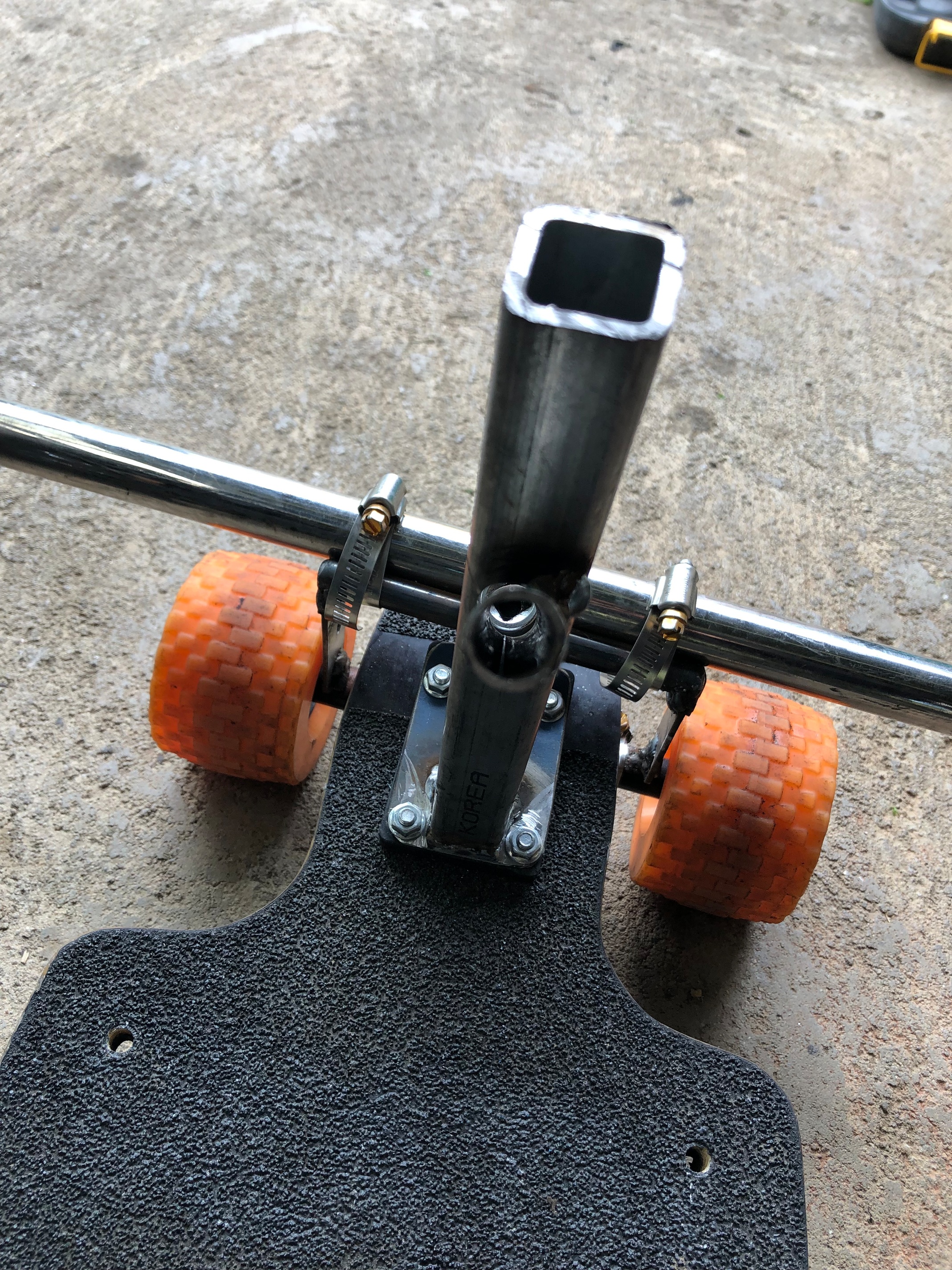 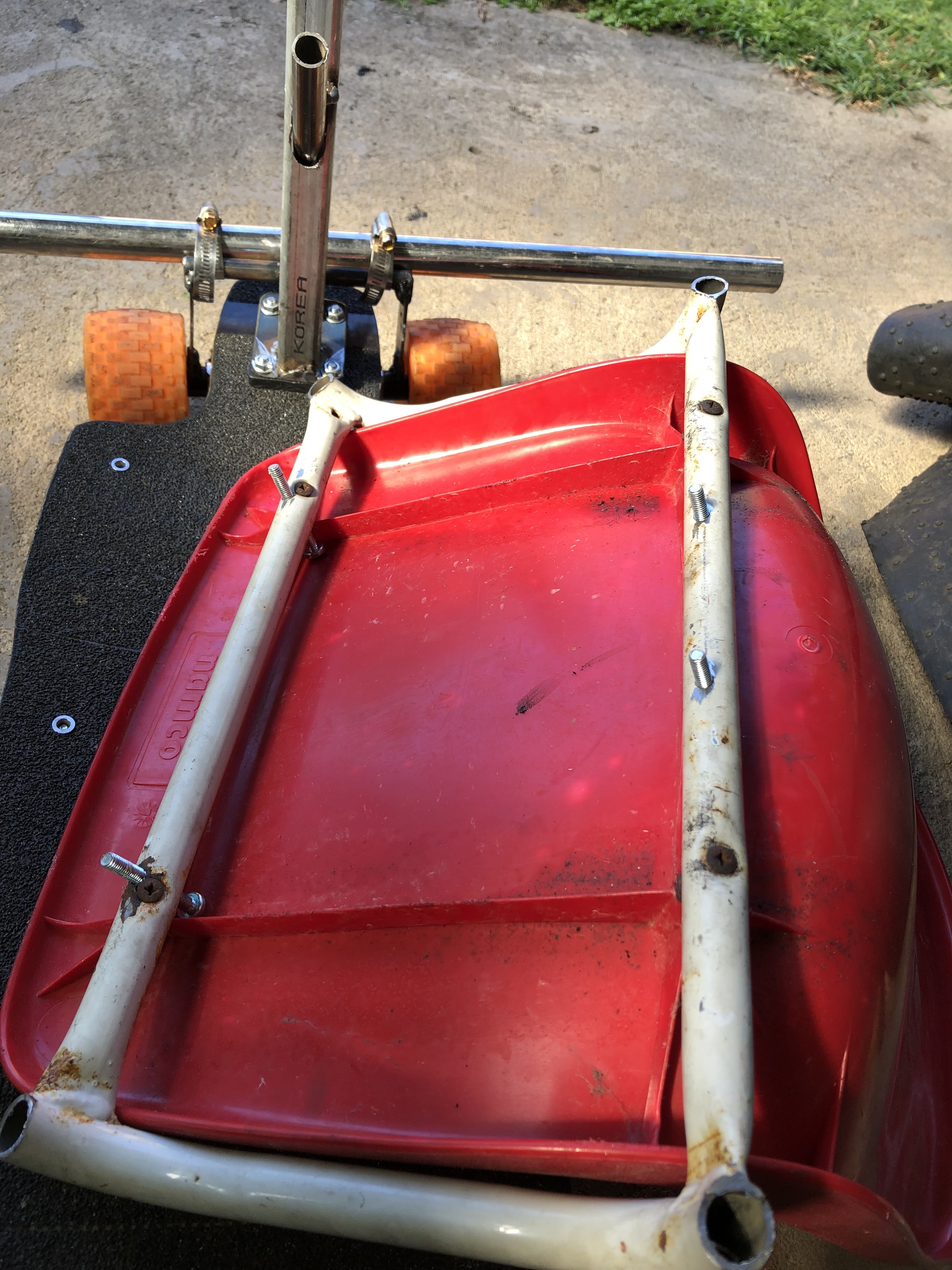 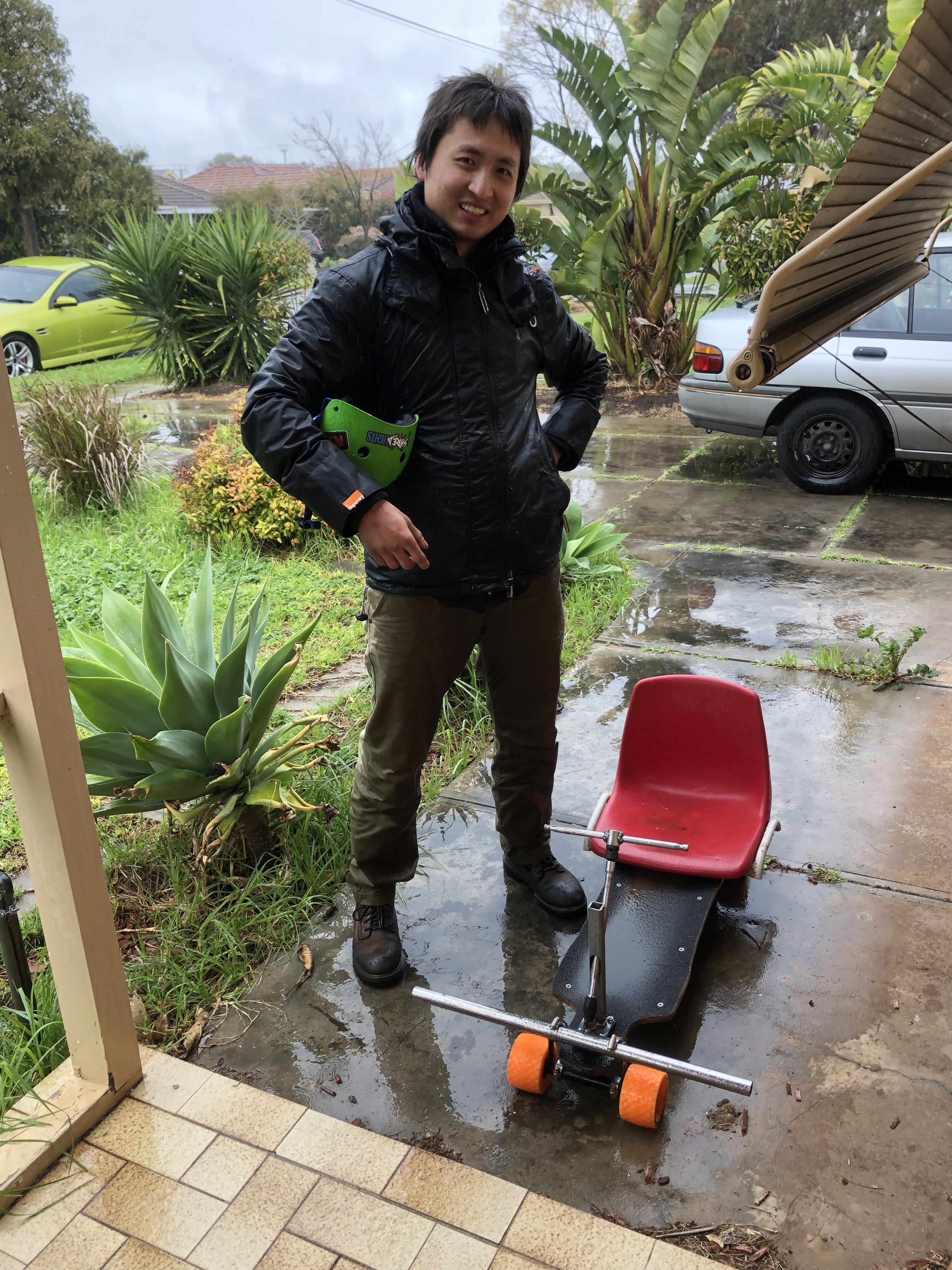 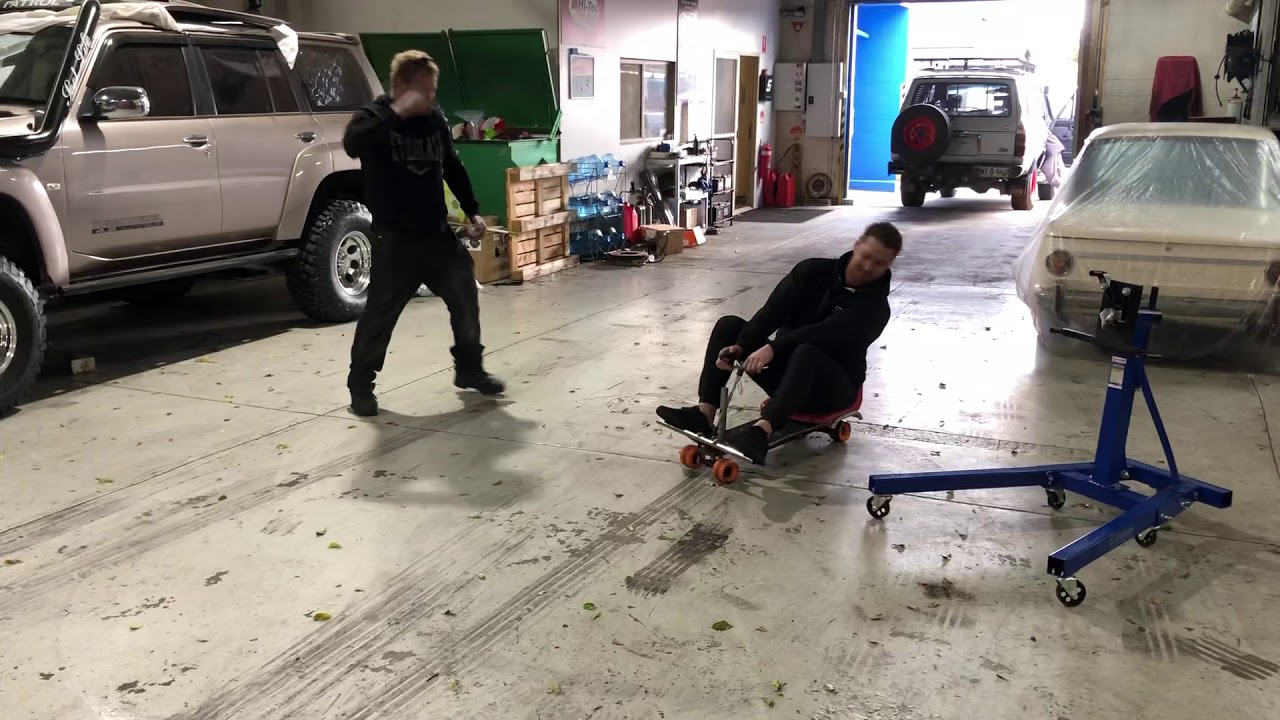 Reminds me when I duct tapped a beach chair on my board after having fallen/gotten hit by a car lol.

Nice mods, geeze that looks scary even to sit and steer!

Edit: just saw the video - swap it to front wheel drive and do some drifts with plastic maccas trays!

See that square section tube sticking out of the front of the board?

That will go through your neck. 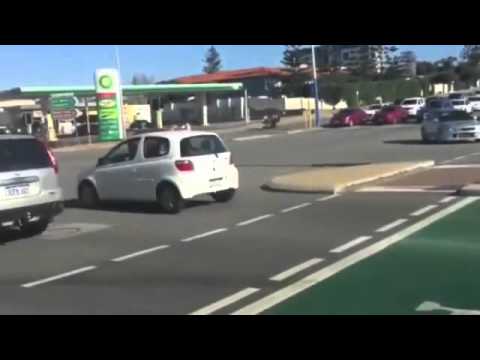 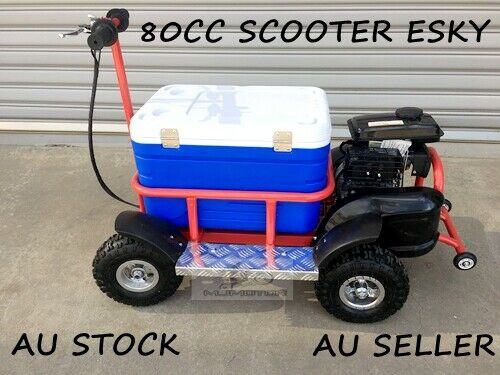 It’s kinda hard to get rear truck 0 degree due to the motors gonna hit the board, space them down would fix it but then not practial enough to me.

LOL yeah it takes few weeks to forget hurt… gain courage getting back on these eboard.

Yeah mate the inner side of the rear truck is a black sleeve(perfect ID 10mm OD 25mm) with some washers. The outer one was the old bushing because theres no “ID 10mm OD 25mm washer” exist for the truck contact area. I found a washer has ID 8mm and OD 25mm and im gonna drill it out so that the outer side will be all soild washers…

Will get it done tomorrow.

Oh yeah sure I got you. Now I found that I’ve got negative camber on rear truck… Bent axle:joy:

Hahaha I thought about making something like this to attach to a esk8 for a racing experience.

I would have kept the longboard trucks normal and add a frame on top with kinda like training wheels either side that would lean and stabilize to board when you turned a wheel (like a baja board with a steering wheel), and you could shift weight into turns to help too. I call it the GoESK8

The idea is it could be taken off easily to return it to a normal board.

Or get a more comfortable seat. I want that front feet steering though. That’s what is missing from mine. And yes, crazy speed wobbles at around 15mph+ sitting normal, but goes away once you lean way forward. I’ve actually move the seat forward since this picture was taken due to that fact. I think the 0 degree rear truck is probably a good idea. 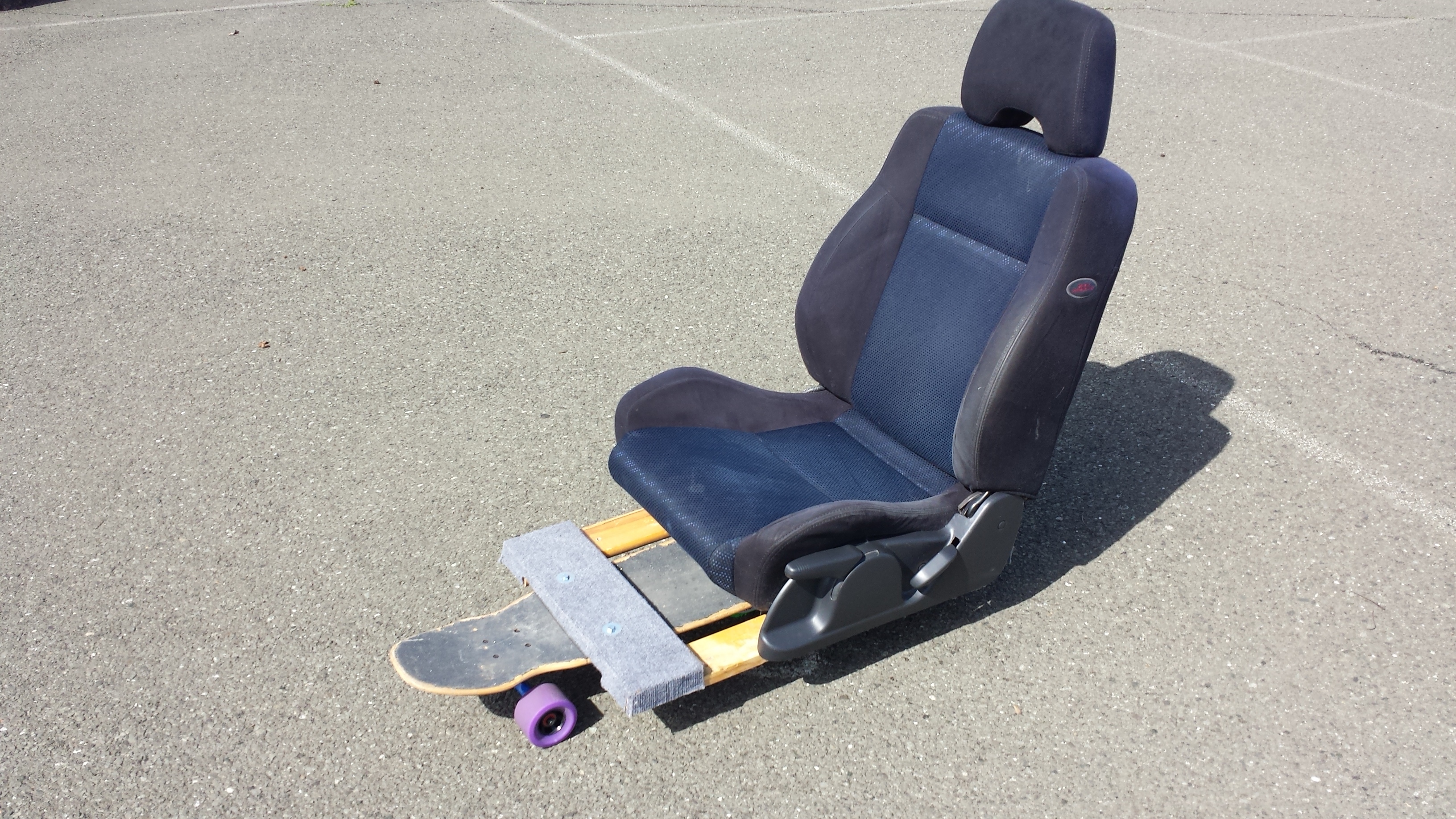 Yeah Im thinking of that but is that any pneumatic wheel hub that fits enertion pulley?

What a great seat, I dont deserve this lol. Sitting too forward in my application would cause no space for steering system though.

Yeah mate so gotta be careful though… its a death trap:joy:

Wish this baby head cover will give me good luck. 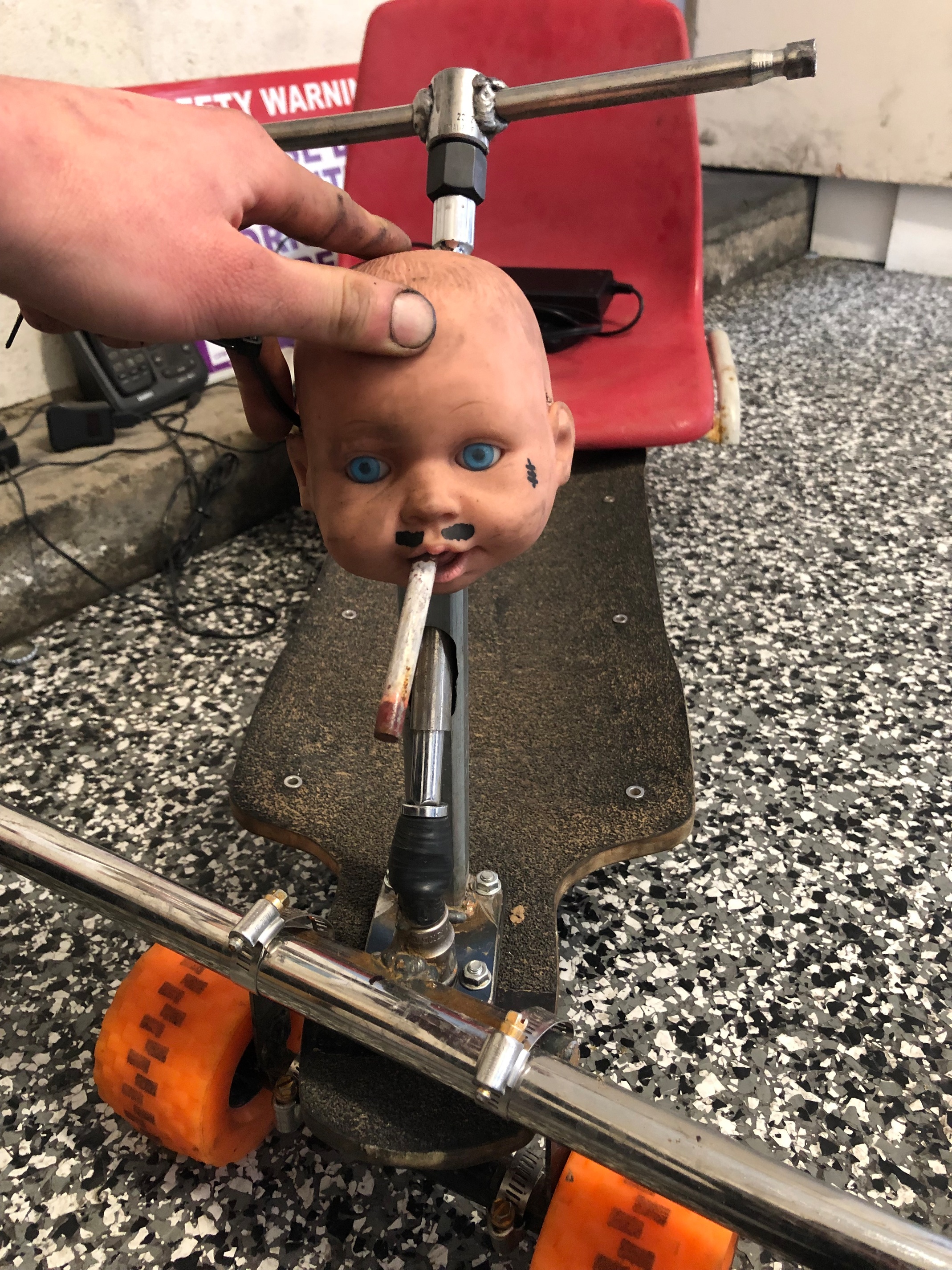 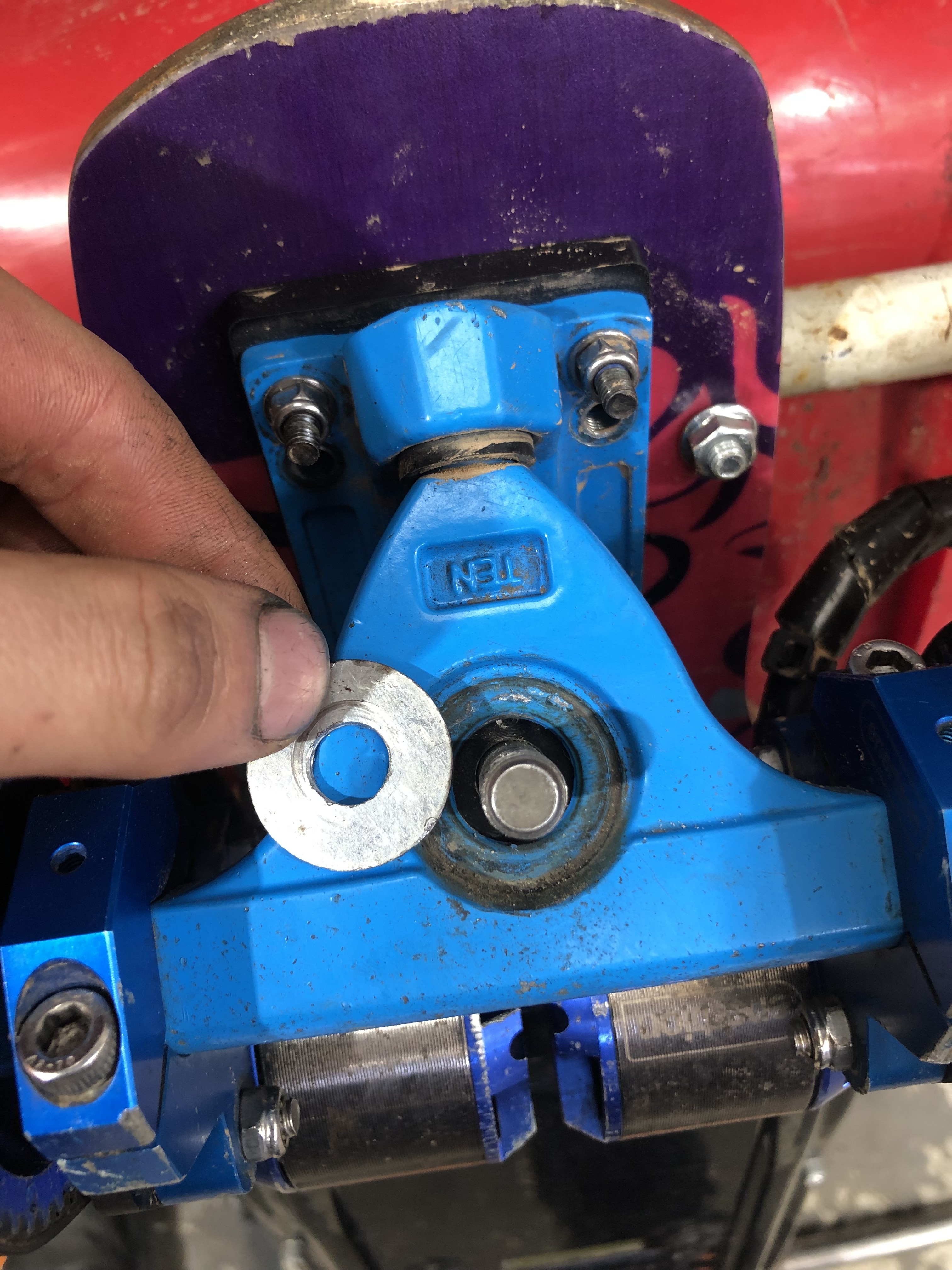 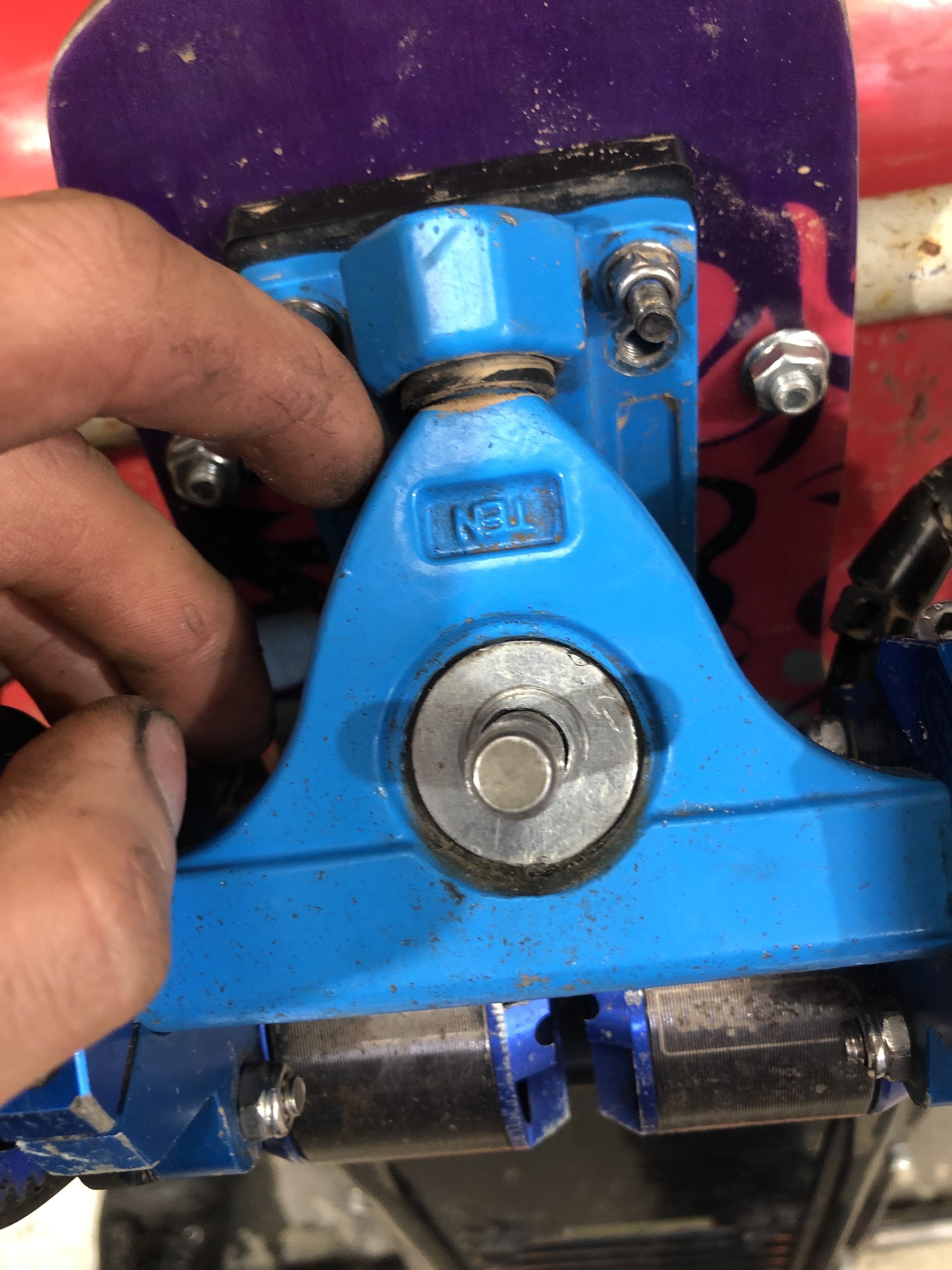 Got the rear outer side sorted. OD 25mm washer with ID 10mm drilled out fits perfectly for the truck cutout. All soild units now, board itself still flex though, just gonna live with it. still looking for a cheap steering wheel and hit it hard during the weekend 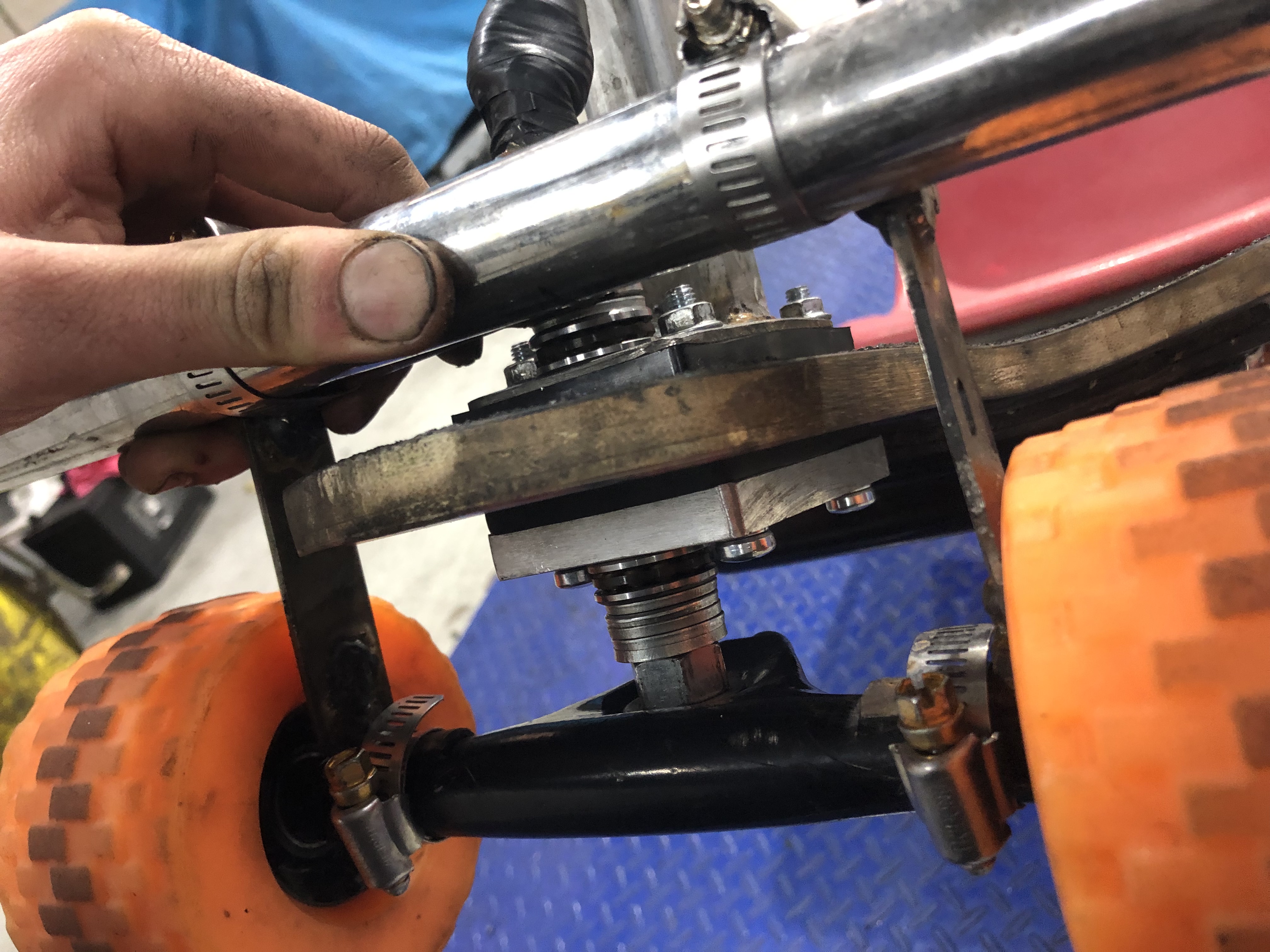 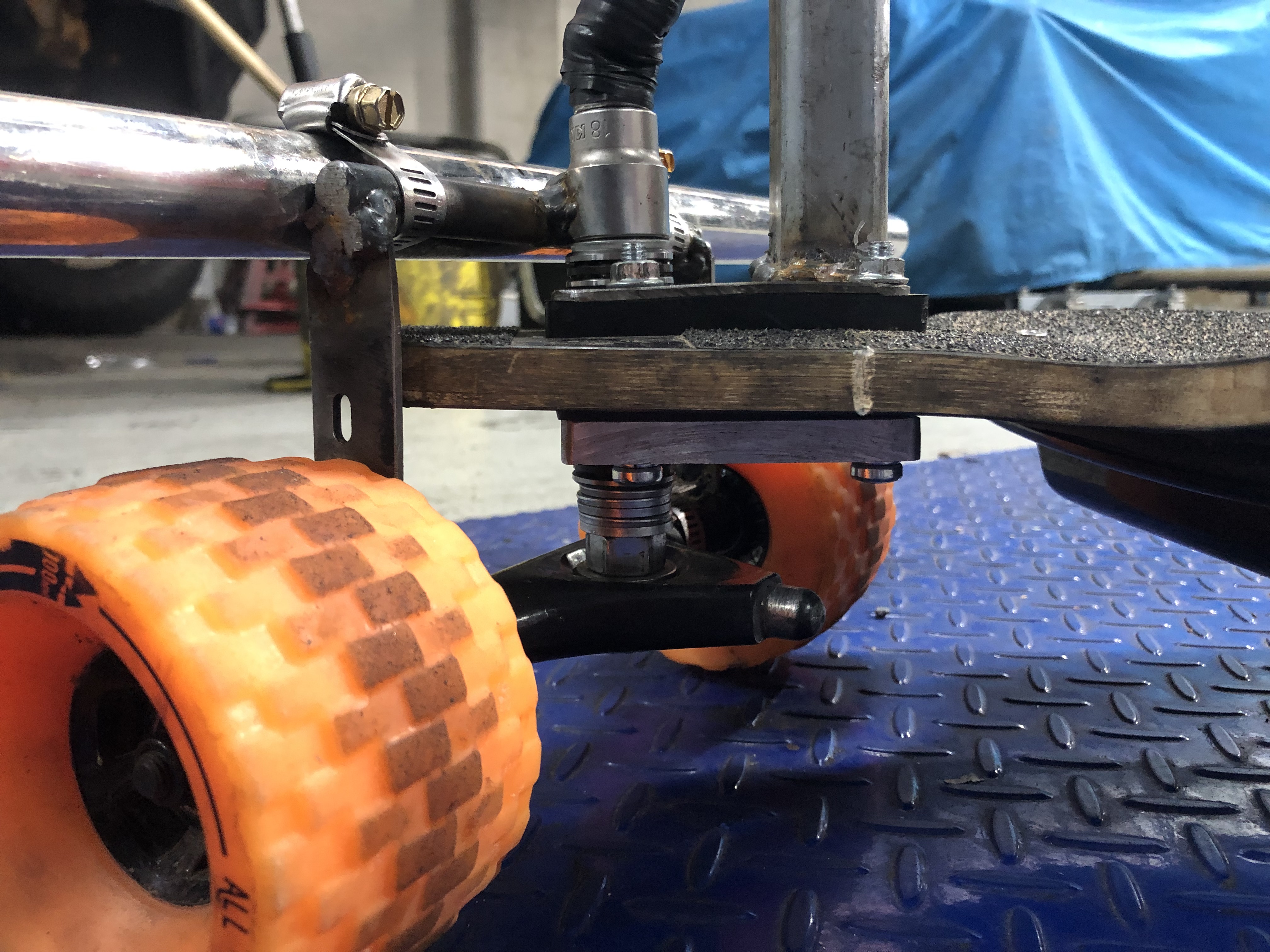 Got rid of wedge plates, now running 0 degree no caster at the front truck, definally more stable and can hit top speed without any fear…

Gonna get a steering wheel and a car steering uni in the future.

Evan, if you are looking for the ultimate comfort mod. 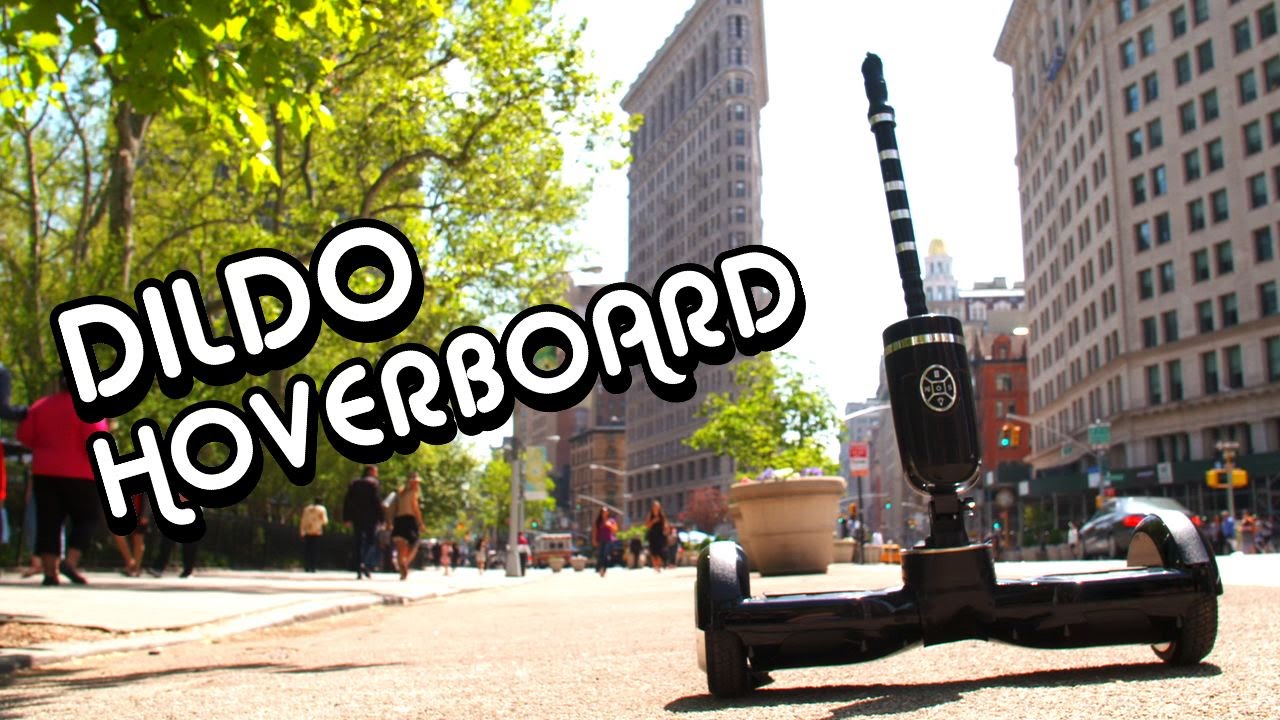 This is GREAT!! HAVE YOU TRIED JUST SWITCHING THE TRUCKS?? People forget that one of the most important parts of your board are your trucks and deck which in my opinion should have been upgraded instead of all the steering wheels and seats…A New deck and bigger wider Trucks was all you needed.