Before reading: Please do not feel that you are interrupting the flow of ideas or anyone else who is reading this thread and has an idea. Though few people are discussing the remote, being developed on this thread, I have continued to reply publicly so that this controller can be made as good as it possibly can be - I am sure that other people will input valuable ideas based on their experiences and will value seeing the thought process behind decisions. Please reply with ideas of things you would like added to the code and changes to the design to make it look less bulky!

Hello! I have created the WINNING Remote shell from scratch with OLED place in Fusion 360. In the OLED Remote.zip you have two options, A tight fit one, or a more loose one for the OLED. When you install the OLED do not push it hard otherwise it will break like my 6 other oleds…

Because I cant 3D print it right, I broke a part for the stepper motor.

You are allowed to modify and sell it but you need to give me credits for 3D Modeling it and if selling ask the WINNING Company for permission. License: https://creativecommons.org/licenses/by/4.0/ I would love to show a video of my remote with the oled, but I broke it by pressing it to hard. I will create a PCB that are Arduino compatible and compatible to this shell. I am waiting for my custom pcb that runs on ATmega32U4. If I succeed I will move forward and create one for this shell. Is this like a better version of the winning remote or a copy of it?

Is this like a better version of the winning remote or a copy of it?

Its a copy ready for 3d printing. I did this because I really like how it looks and how small it is. Inside it I have my own electronics not the unreliable winnings remote.

Technically it’s a better version because its reliable and has a display that shows the current ampere, voltage, speed with a menu that you can change the light colors, speed, acceleration, where to turn when you have enabled the GPS Destination etc.

Really nice work with this! Love your PCB skills! Do you know what part the winning uses for the thumb wheel? Joysticks are quite wide so I am looking for a better alternative

I do not know what part they use but found a simple pot on ebay (http://www.ebay.co.uk/itm/2-PCS-Piher-Potentiometer-PT15-Rotor-16mm-WHITE-RED-/220651549590?hash=item335fdb7396). If a thumbwheel was then 3D printed (with two holes near the edge 180o apart from each other), then put a spring between casing and holes on thumbwheel for both sides of the thumbwheel and two part epoxy the thumbwheel to the rotating part on the potentiometer. Then you have a thumbwheel!

I assume you are using RollingGecko’s code from Github? If not, what does yours do differently?

I assume you are using RollingGecko’s code from Github? If not, what does yours do differently?

I do not use RollingGecko. I made my own hardware. The difference is I can change values with my controller. Like turning on/off lights, change the light color, the max speed, max ampere and acceleration.

Here is an example, its a old video much has changed.: 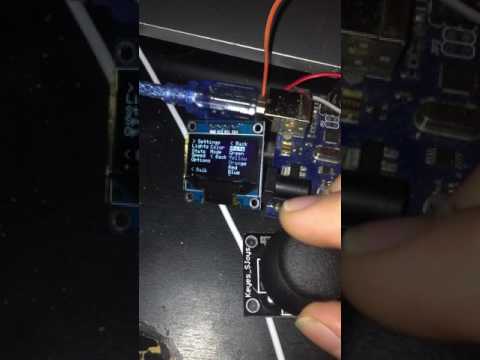 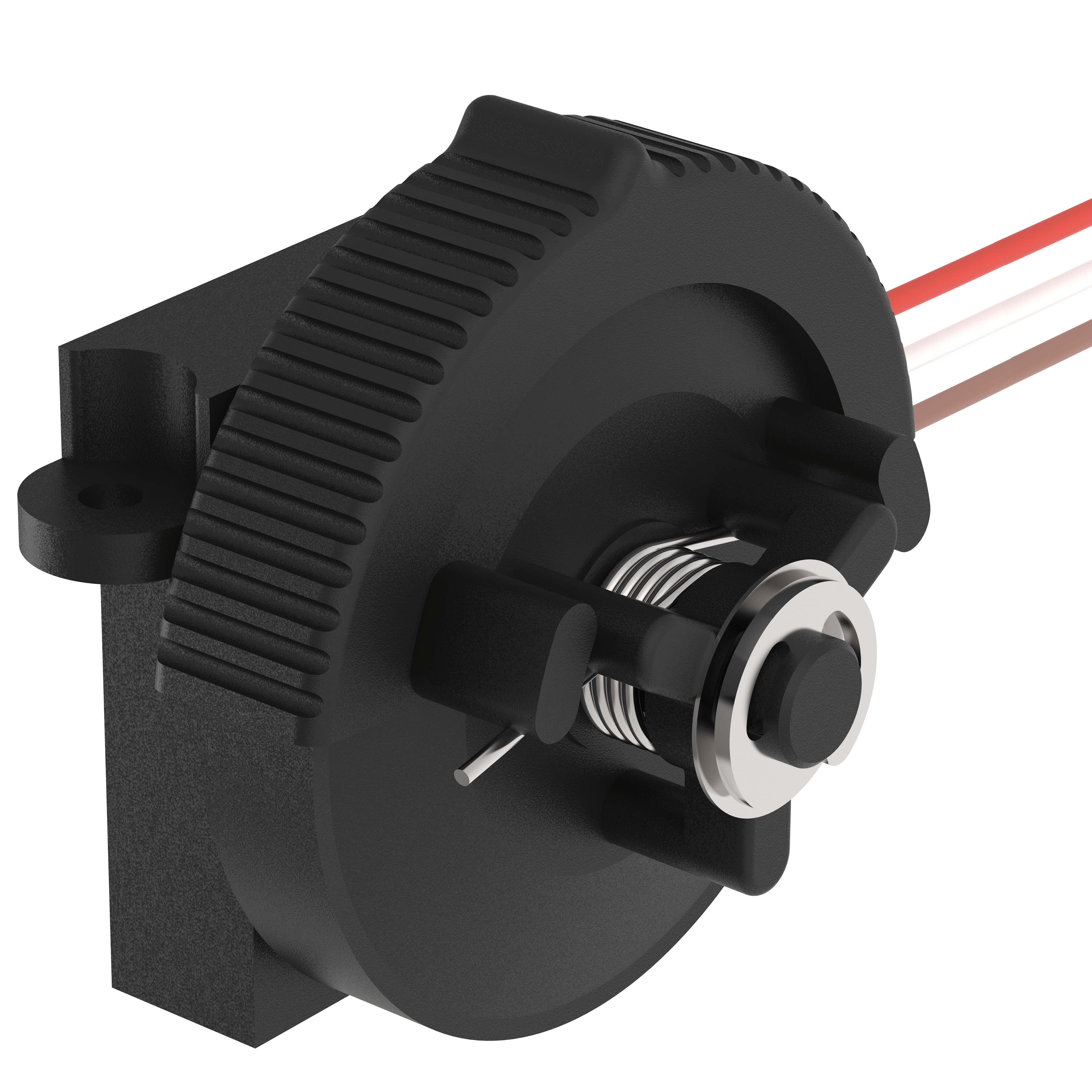 Will you open source your software at the end so others can use - it looks amazing? I am thinking of doing this next year but maybe also integrating some gps navigation using Google maps API, bluetooth to transfer data and gps to know when the next direction should be displayed. Having something like this: https://snazzymaps.com/style/79/black-and-white on an lcd display would also be quite cool.

The problem I have with that thumbwheel is that it looks like it returns to very back when released - I would prefer if it went to the middle or to 1/3 from back (if you see what I mean).

Yes I have thought about that. Before I had bluetooth connected and I could change values and controll the speed with my iphone. I think about having an ESP8266 that host an access point to show where you have driven and the good thing with having an ESP8266 I can have wireless updating. I will have a gps module that gets logged on a sd card. The ESP reads from the sd card and writes it to the client. The gps gives me the local time too so I will have a bar in the middle of the oled in the controller displaying the current time.

But I think having two system that uses wire to communcate, because I dont want the reciever to UART to get slowed down etc.

The problem I have with that thumbwheel is that it looks like it returns to very back when released - I would prefer if it went to the middle or to 1/3 from back (if you see what I mean).

Ohh I forgot that, I get what you are saying ;)¨

Well the bad thing about having that map on the oled is that I need to be connected to the internet. But its doable I think. But it will be hard to see on the oled. I will give it a try in the future?

Its an easy fix to get it go back in the middle, I will 3D design it now. 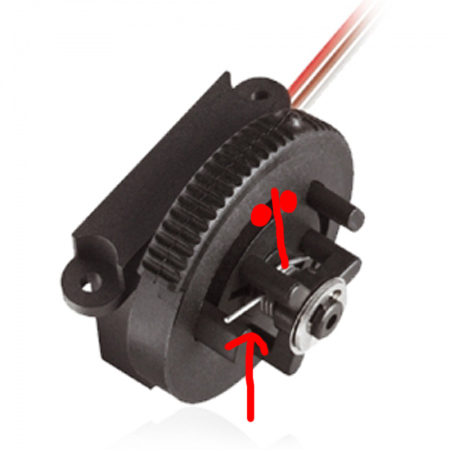 Seems like you have an idea how to do it! I am going to have to research how the ESP8266 works and how to get the app to copy some text from a webpage to understand your code I think! Please post pictures if you get this working. I will upload in 30 minutes a stl of the thumbwheel I was talking about to thingiverse and will post link here.

Cool! If you want ESP8266 to get things from webpage you can use an API called ThingSpeak and use HTML XPATH. On the ESP you use HTTP Request.

Thanks for the explanation, my main idea is the gps directions not the map (map was just cool addition but really useless because so small)! I don’t have the time to work on this until June but I assume it is going to involve setting up a website, inputting start point and destination, then fetching the directions from Google and weeding out all the unnecessary stuff. Then this script has to be transferred over ESP8266 wifi to the arduino(s) that have bitmaps for the Turn left, turn right instructions and a gps. The screen will then display metres to where you need to turn, which way you need to turn, then a line, then speed in top right, then km/miles left (based on gps and watt hours). This code is beyond me for the moment, so good luck if you are going to try it - you seem to know a lot more! By the way, I couldn’t find the use of Thingspeak in this application (perhaps it is my insufficient knowledge of coding) I did understand Xpath though!

5 minute thumbwheel creation (will be updated in June when I design my controller):

This thumbwheel is for a DIY electric skateboard remote with an LCD that is still being designed. It is based around the thumbwheel of the boosted remote/ WINNING remote. 1 spring goes from each hole in the thumbwheel to the casing so that the the...

Very cool idea! I can join you. I have already created a meter counter with the gps. Not 100% accurate yet… Here is the code I have made:

Pastebin.com is the number one paste tool since 2002. Pastebin is a website where you can store text online for a set period of time.

And for the gps you can also use an accelerometer inside the board that shows the way. The arrow will move dynamic of the way the board is pointed.

Well here is my updated thumbstick: 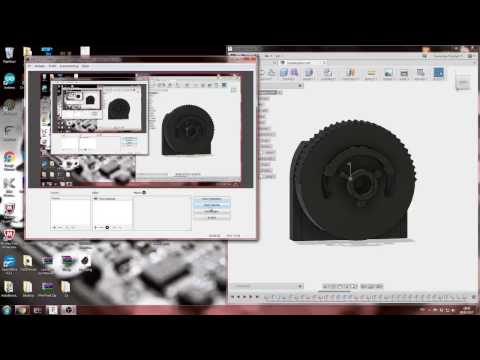 If I understand your reply as something like this (https://www.kickstarter.com/projects/1411369083/beeline-smart-navigation-for-bicycles-made-simple), I think that a gps with turn signals would better. A dynamic rotating arrow based on the direction of the board that showed you which exit on every turn to take would be cool, but hard to implement with the Google API. It also would be harder to interpret on some roundabouts where the exits are close together. To make connections clear, I have started a list below (connections I am unsure about in italics)

I use solidworks but am trying out Fusion 360 because it renders fast and beautiful!

I think the thumbstick should have a knob to indicate where it is - the bobbles will give grip but won’t allow you to know where it is (if you see what I mean). It certainly looks more professional than mine, but don’t know where the spring connections go - is it a ‘copy’ of the linked one or an improved version that returns to half-way/ 1/3 of the way up.

Didn’t mean for this to be so long!

On watching a second time I think I understand (see image) Or is the long bit of the spring stuck between the top things on the rotating part of the thumbstick?

Yeah I was going to add it but I forgot it.

Almost, but I will use one in the middle. The spring is in the middle of the static overhang, with the two cylinders(More like a metal thread, then a spring). And the gps bike thing is just like what I meant! I didnt fully understand what you meant with the connections, on second thought I think what you mean.

For the GPS, we could have a setting with “Auto Turn Signal”. So when you are 5 meters before a turn to the right it will blink for you automatic.

Got it now for the thumbstick! Do you agree about the arrow or would you prefer it - I suppose if you know which way you should head that is much simpler, uses up less memory and has less to go wrong! Also, everyone should be able to follow an arrow and easier to learn about a place if you do not blindly follow instructions but work it out! I was just thinking that bluetooth is compatible with everything, so connect bluetooth module to serial of transmitter nano 2 and then send a string (latitude and longitude) to the bluetooth module of transmitter nano 2. Problem is that currently the serial port of the transmitter arduino nano 2 is connected to the other transmitter nano!