This is my first Electric Skateboard build and I am excited to share what I have done so far and keep you updated as I complete the build (if that’s ever possible).

To begin my build, I purchased 2 of Hobbykings 6354, 260KV motors in their Black Friday sale, as well as LESS THAN IDEAL Hobbyking X-Car Beast CHEAP 150A, 6S ESC’s. ( I thought that they were cheap and would help me to get started before I go and buy some VESC’s.) I also bought a 6S, 5000 mAh Lipo battery pack, ill need another later on, and a programming card for the ESC’s. 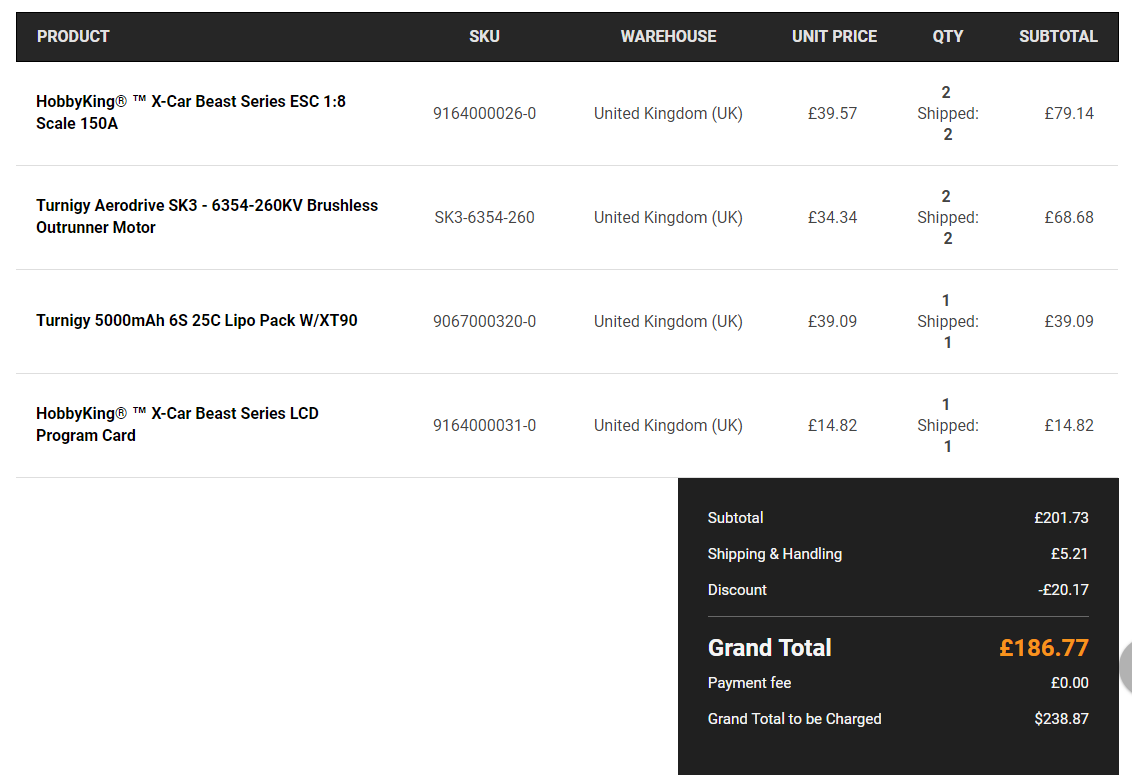 I then went on Amazon and found the CHEAPEST Longboard I could find which was the Deuba Atlantic Rift Longboard for £37.75. (I know, I know, it’ll break)

This arrived and the bearings were as shit as I expected and the board would slow down on a hill… Also, the grip tape made it look very cheap so I ground it all off and varnished the board with 4 coats of water based floor varnish.

In the mean-time, I was waiting upon my Slick revolution Jumbo 110mm wheels to arrive and grip tape which I could apply temporarily to I don’t slip off when learning how to ride the thing. 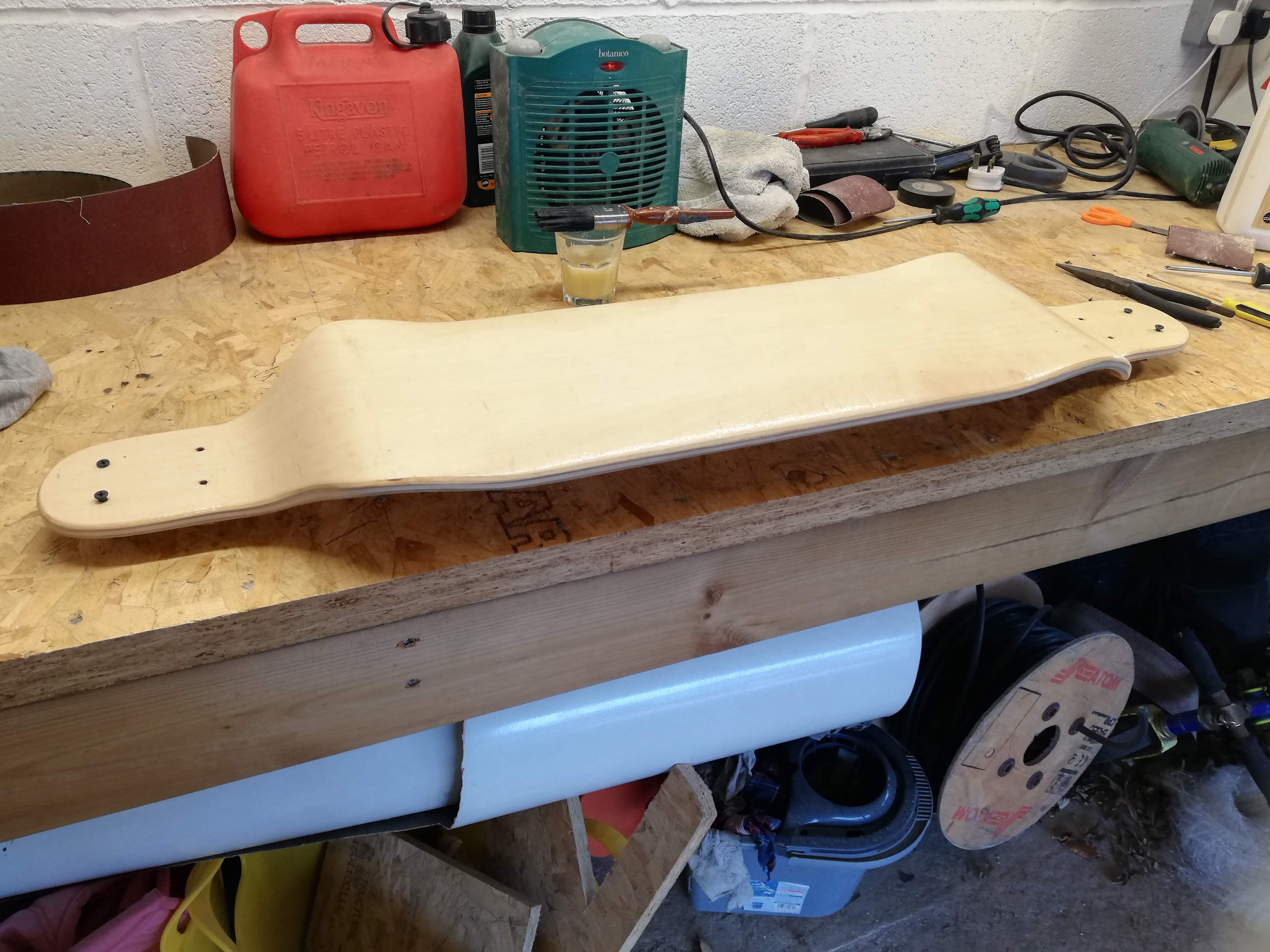 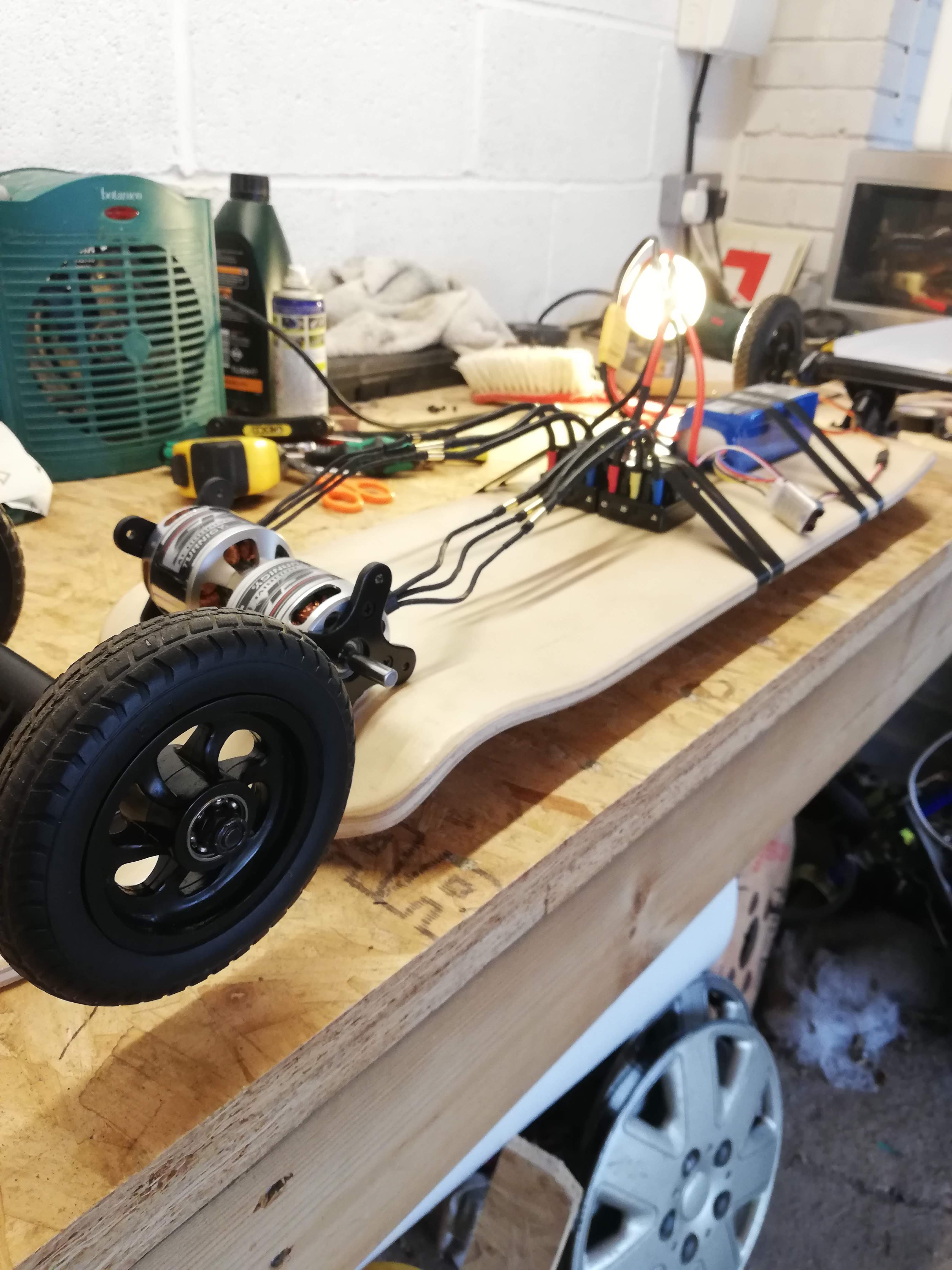 I some belt sander paper to act as grip tape temporarily and bought some green 120 grit which I cut into hexagons to see how it would look but the colours didn’t match my wheels and frankly, it looked dumb… (trust me) 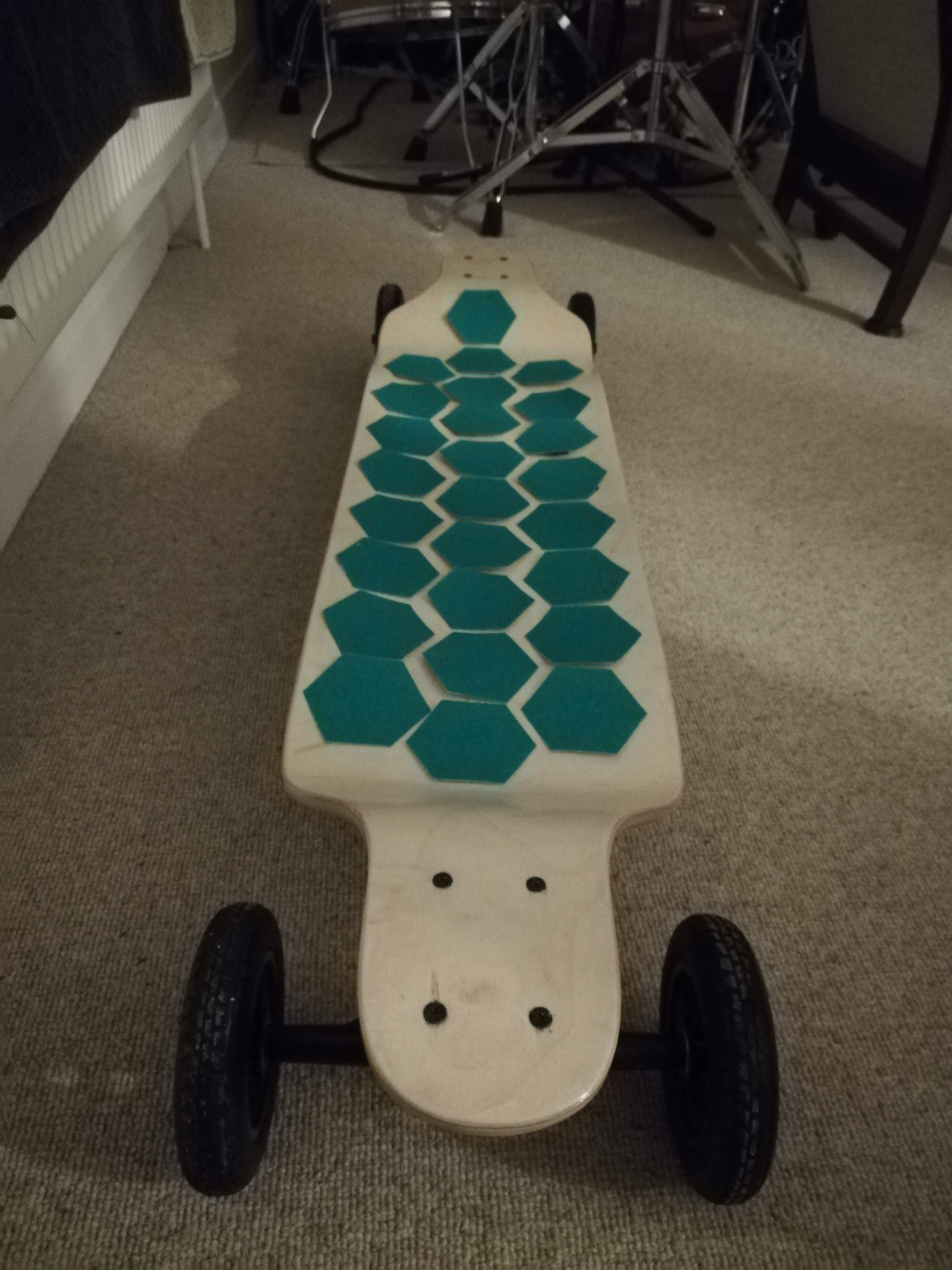 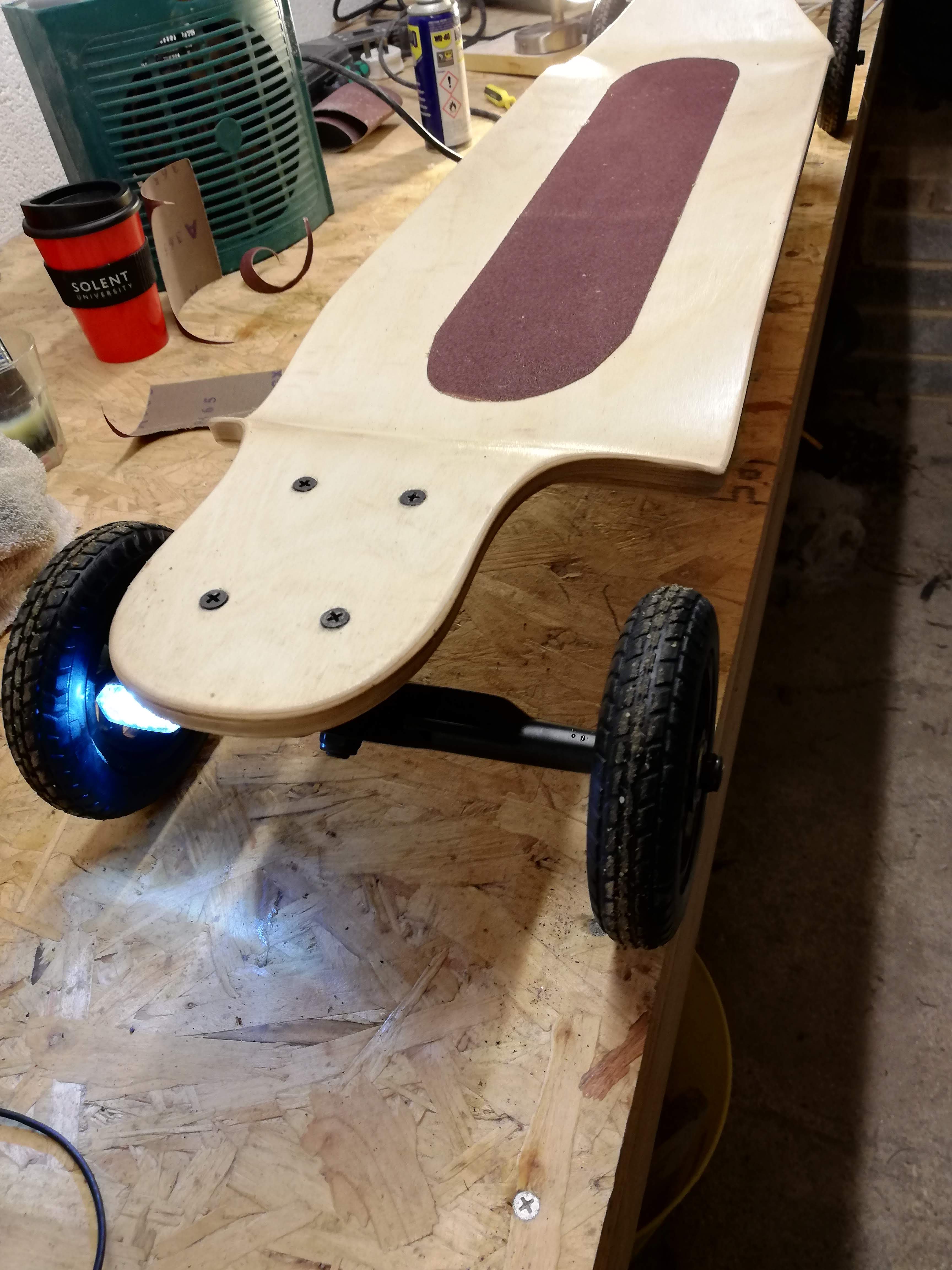 THEN MY WHEELS AND GRIP TAPE ARRIVED and TRANSFORMED the look of the board. ( even if I did cut it all wonky… ) I don’t have a great photo of this. 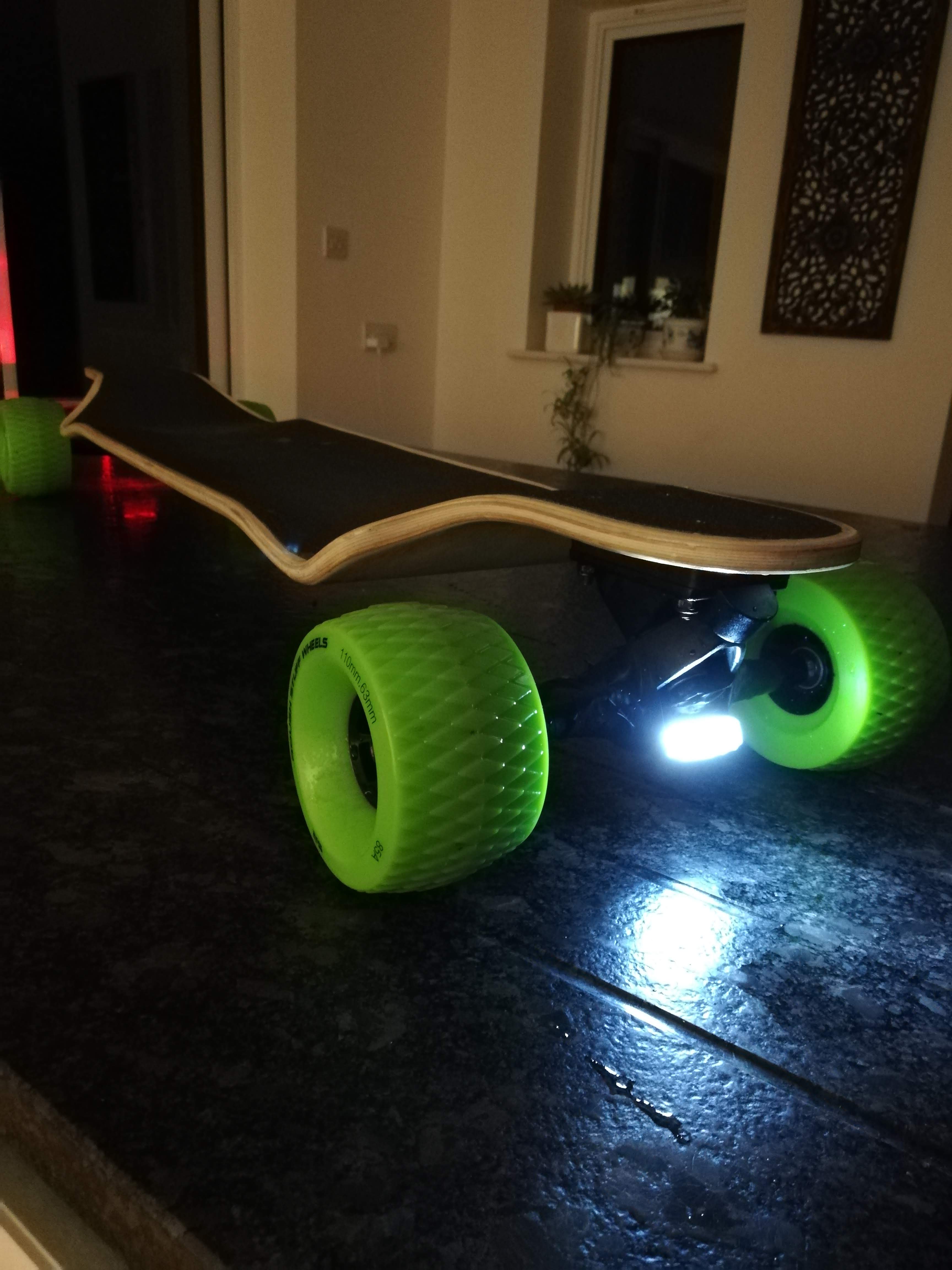 I left the edges of the board exposed so the varnished wood could show through and I think it looked quite good. I also taped on a bike light so I didn’t get killed when I went skating about with trusty old electrical tape.

I hadn’t mounted my motors yet because I didn’t have the money to order a mount set… (College Life) so started work on making an electronics holder for the bottom of the board.

I measured up all of my components and in college, made an MDF mould shape of what I wanted to vacuum form. 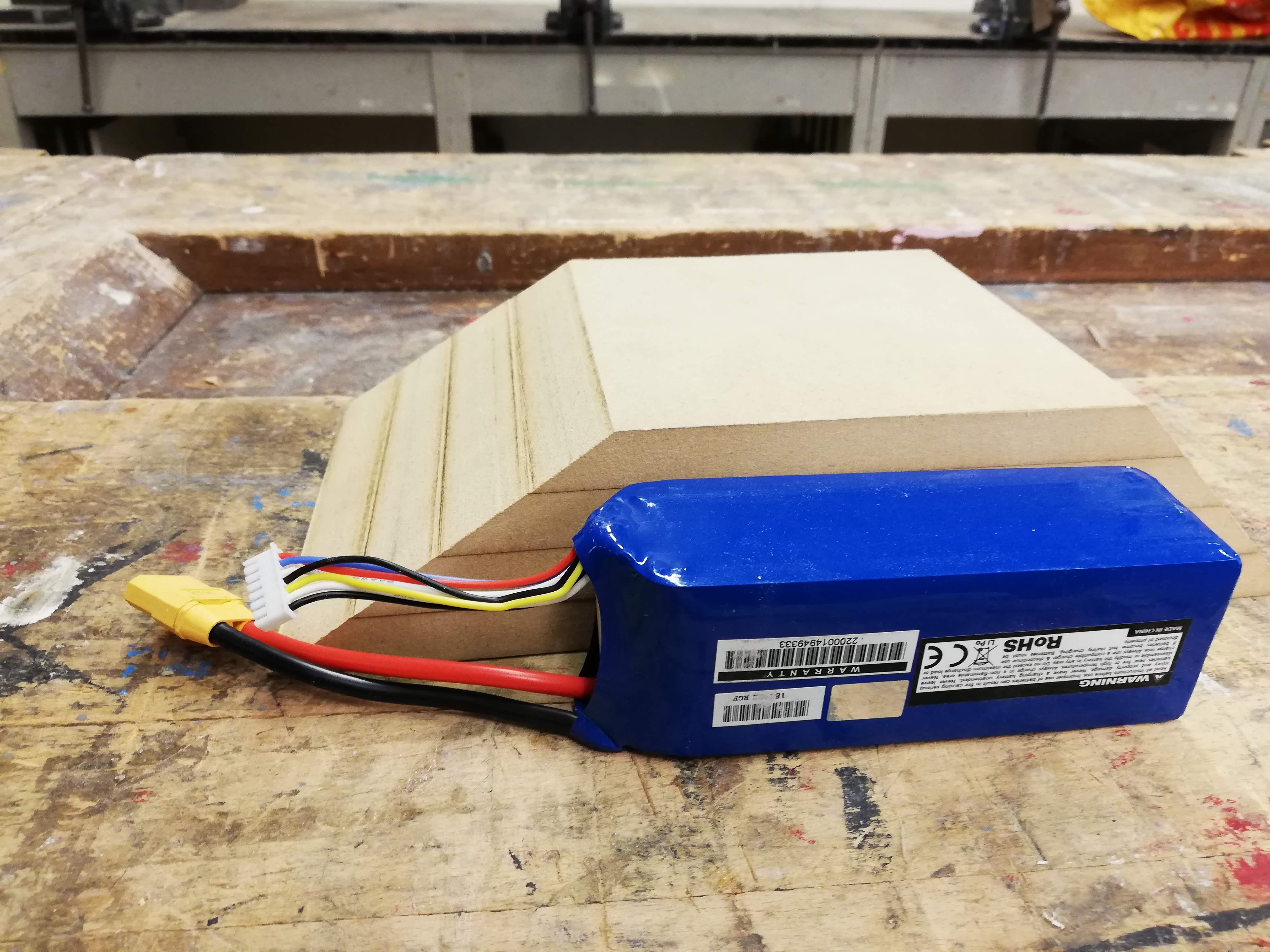 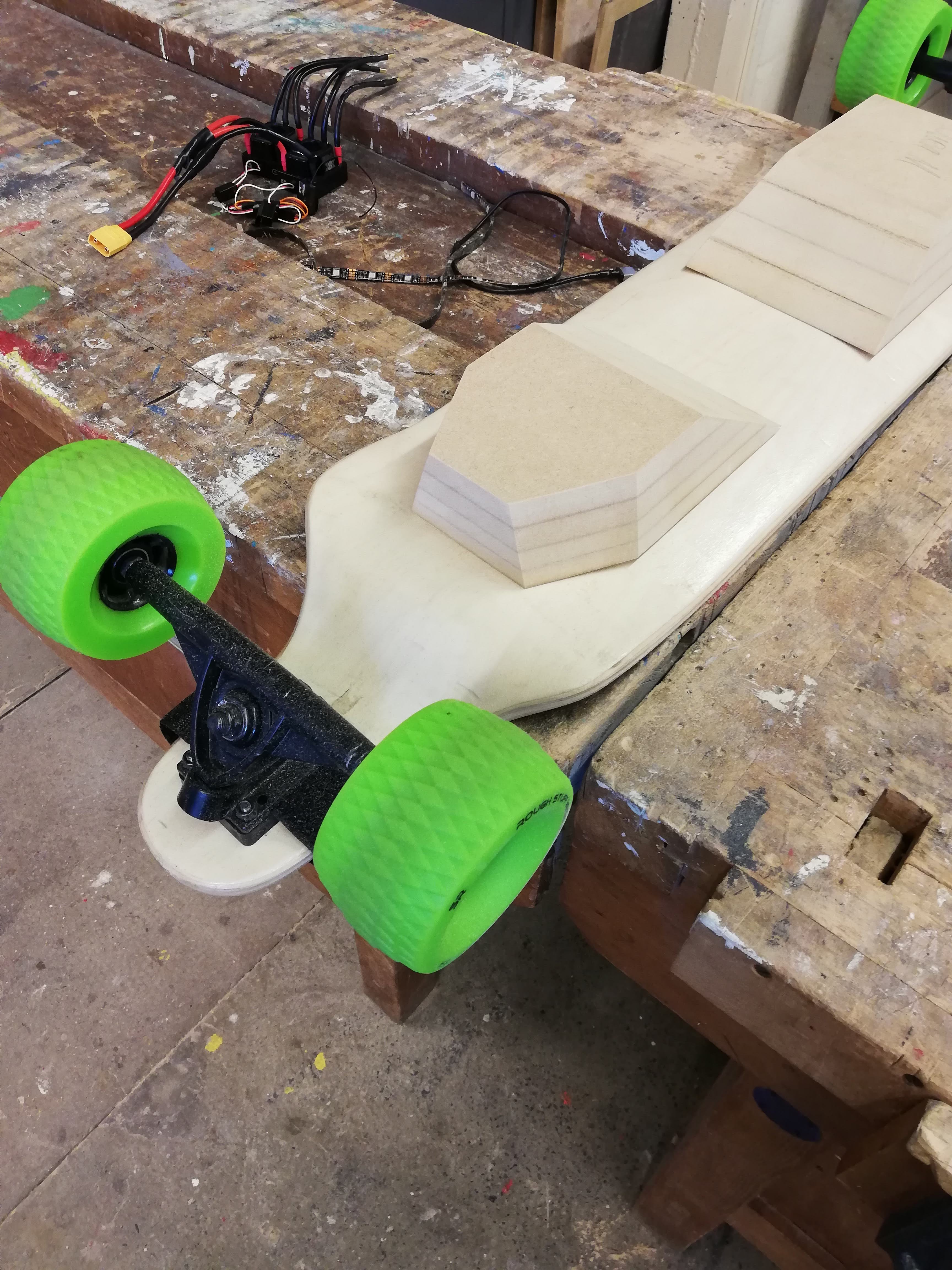 I used the band saw and disk sander to add the desired angles to it and then vacuum formed it in 1.5mm PVC, giving me this: 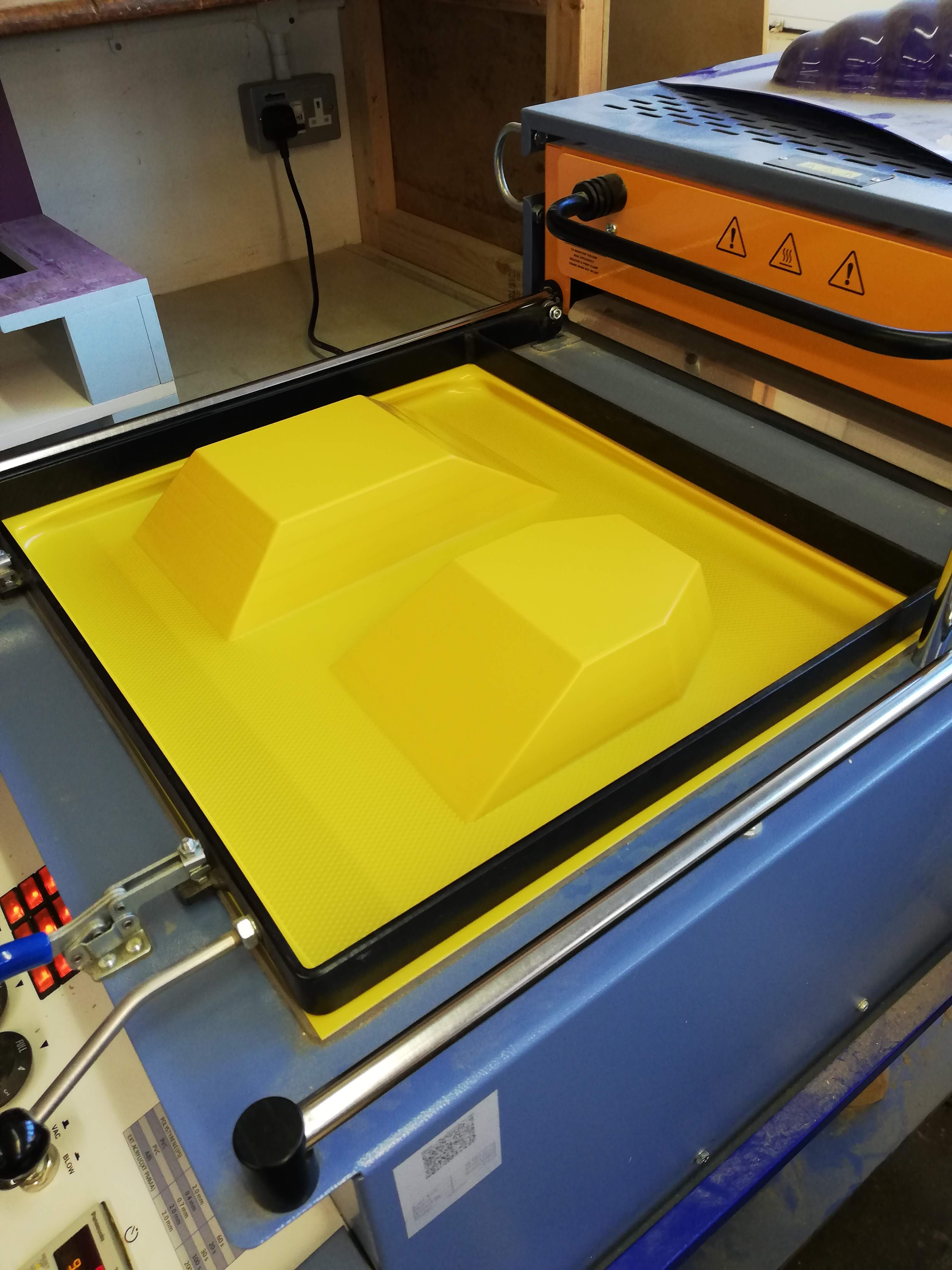 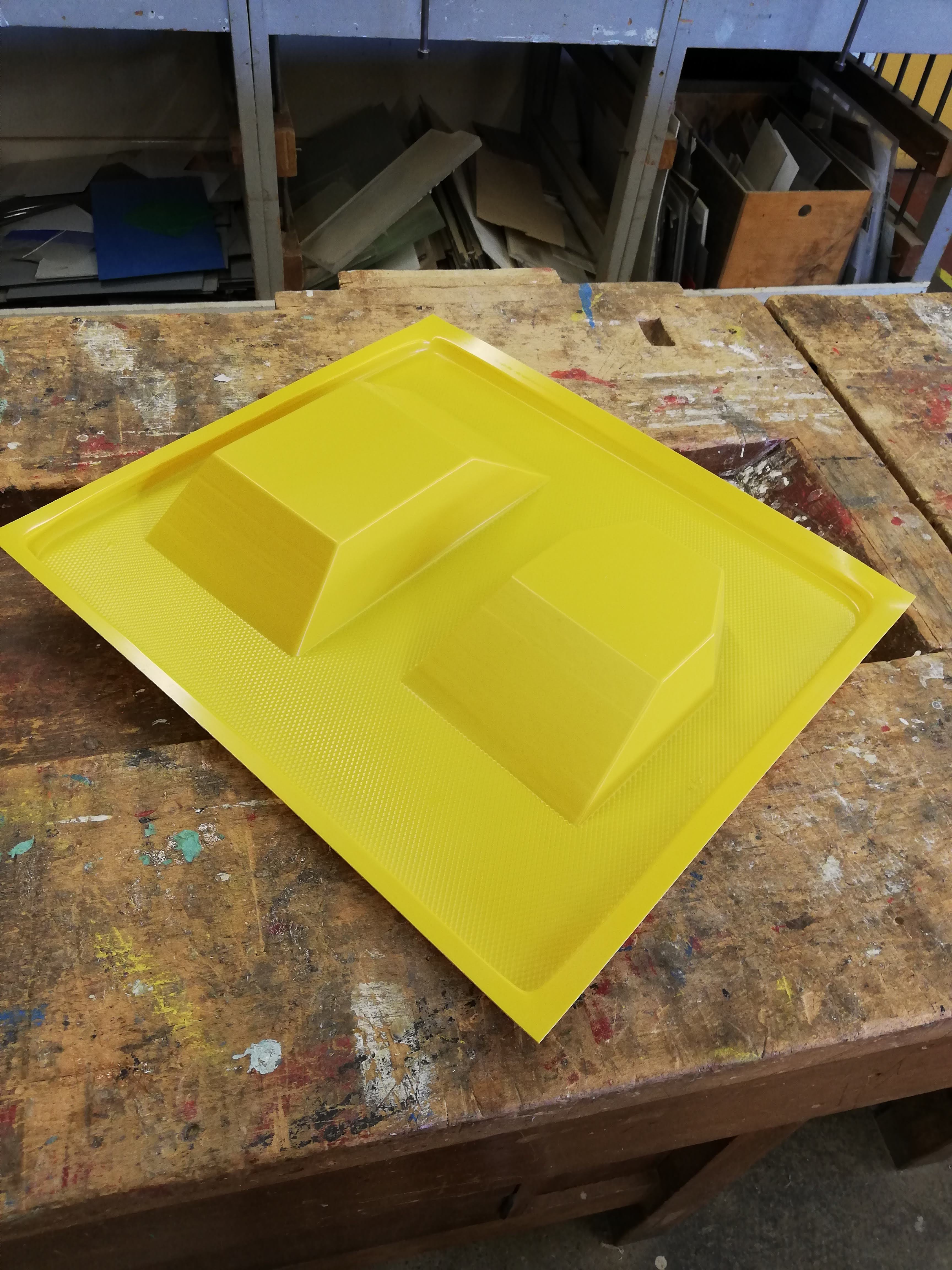 Then, I marked a 30mm flange around each mould and cut it out, giving me an area where I can screw it down onto the board. 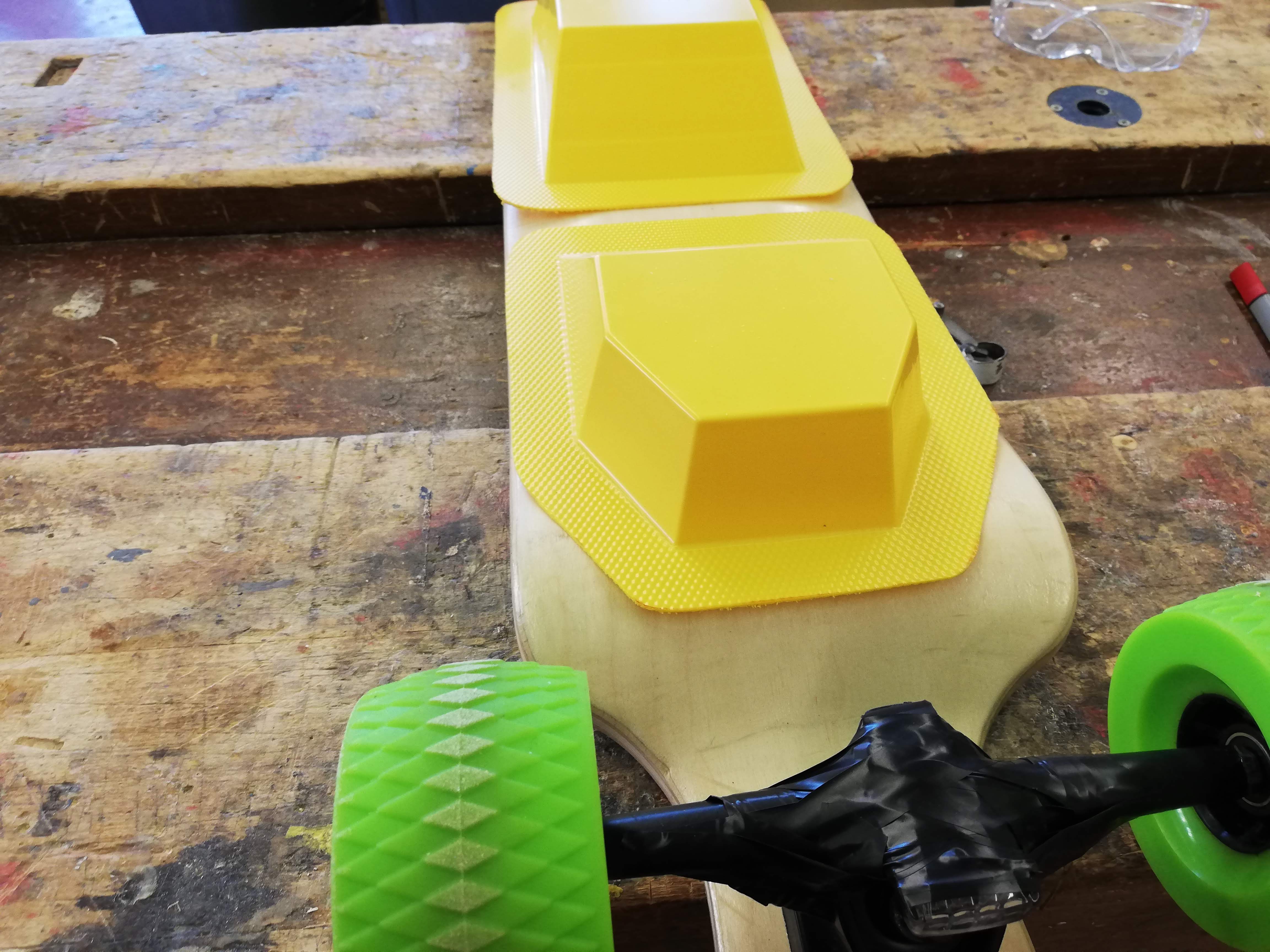 I thought that the best way to attach these to my board would be to use M8 Threaded Inserts and Wing Bolts so I purchased these.

I got these and marked out the points they would be placed on my board, ensuring there were correct distances away to reach the motors etc and drilled 10mm holes in the deck for the Threaded Inserts and 8mm holes in the same positions on my moulds for the Wing Bolts. However, my threaded inserts were 15mm long and my deck was about 11 so I cut them down on the college lathe. 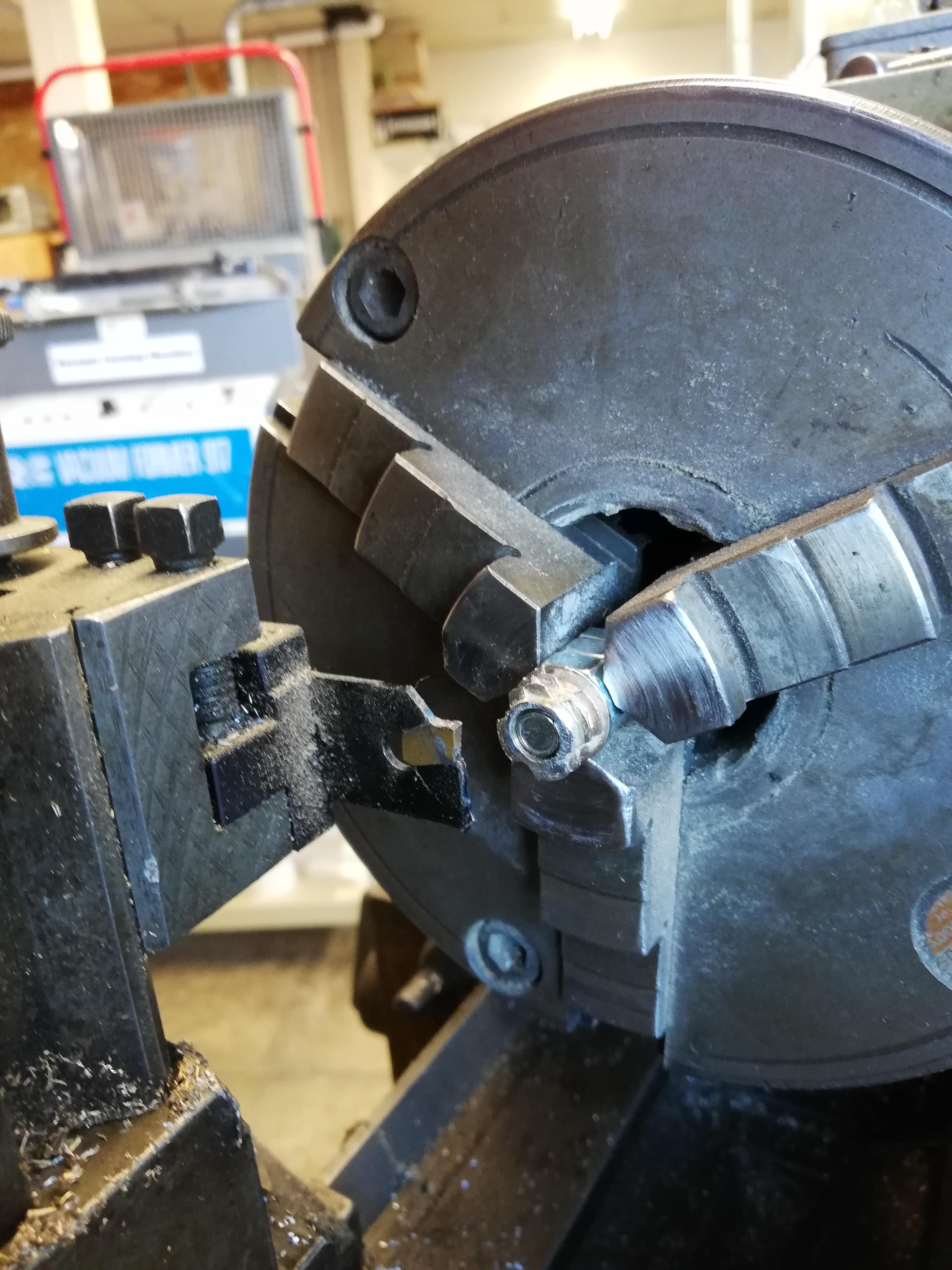 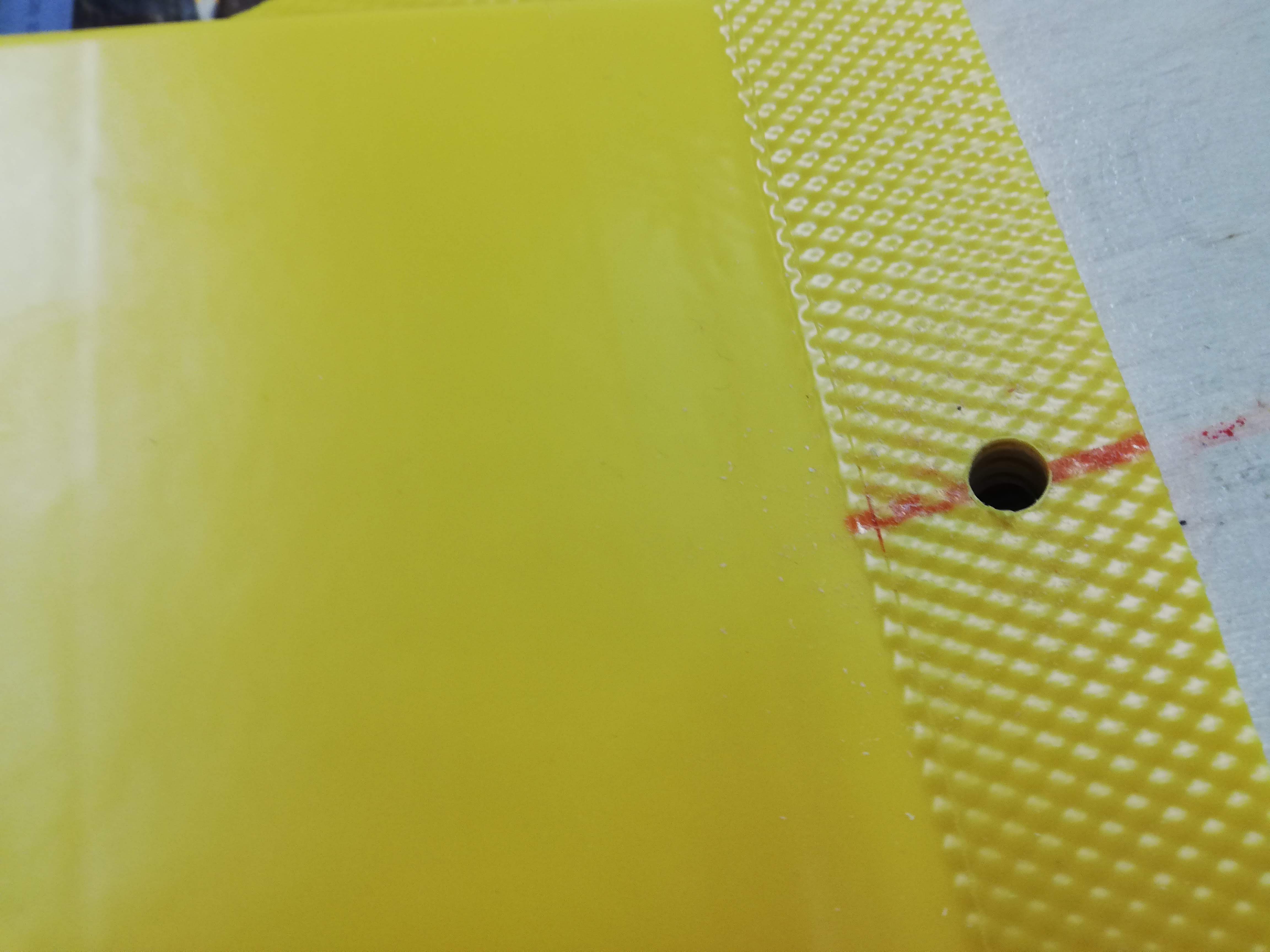 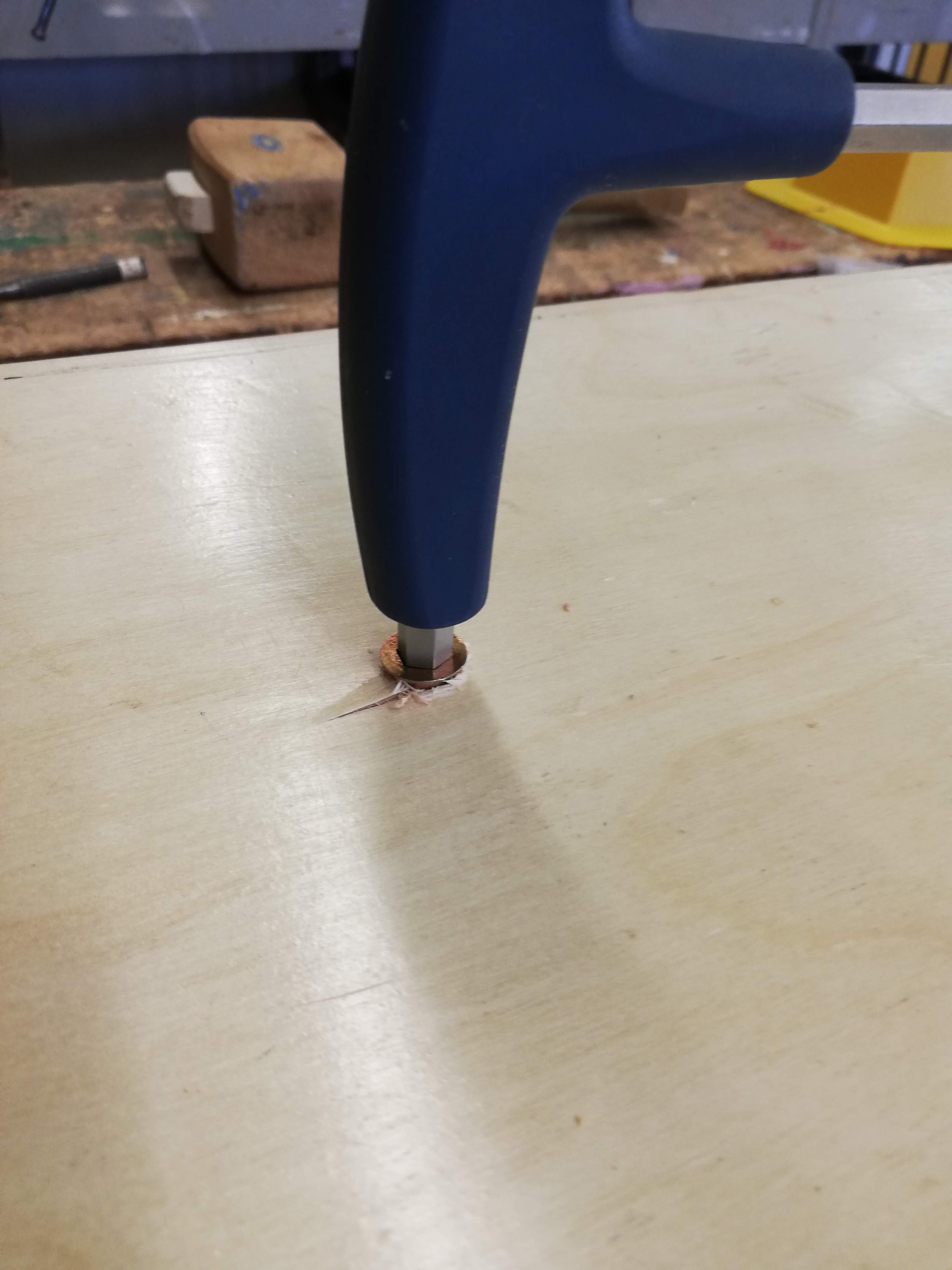 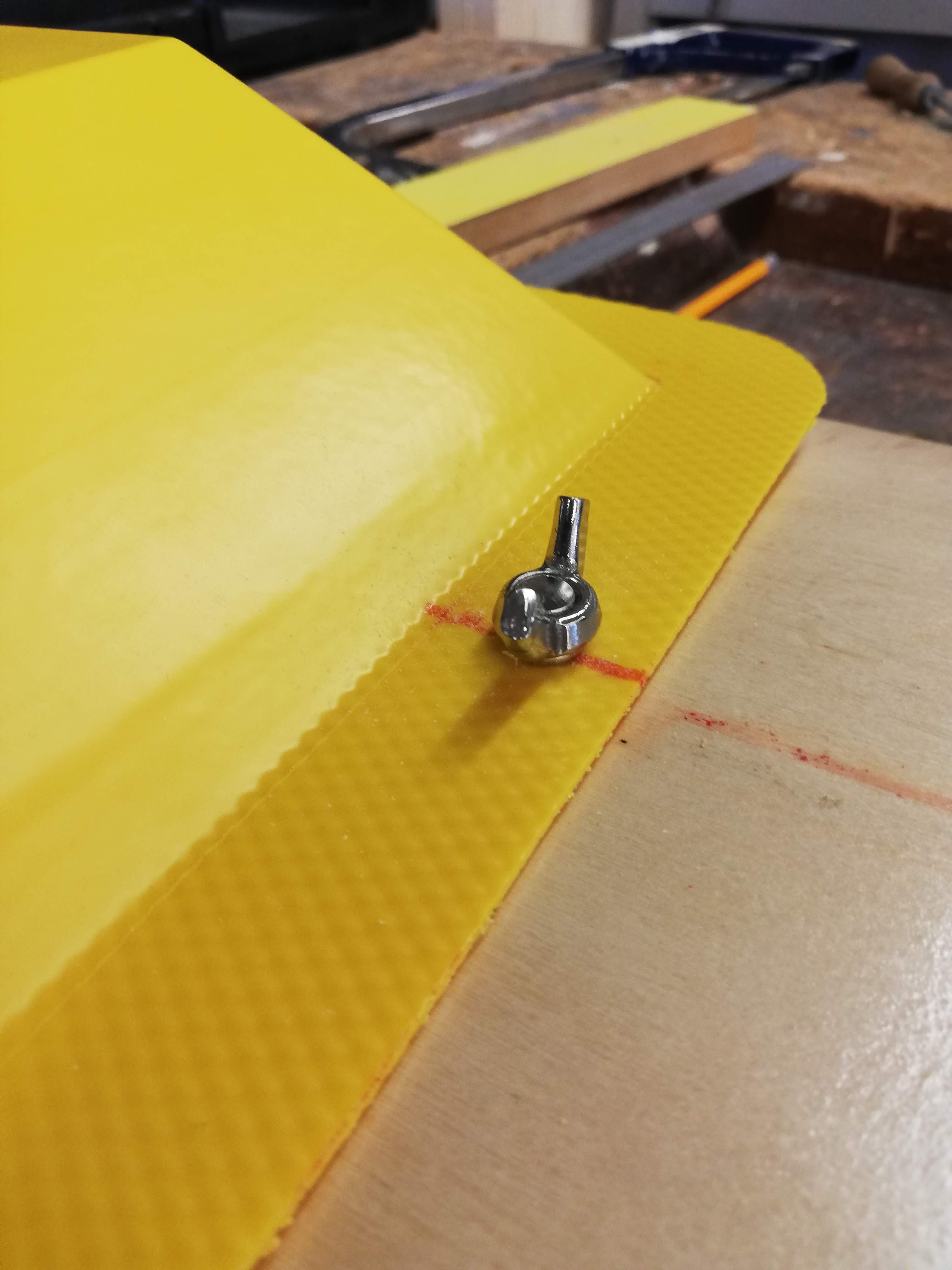 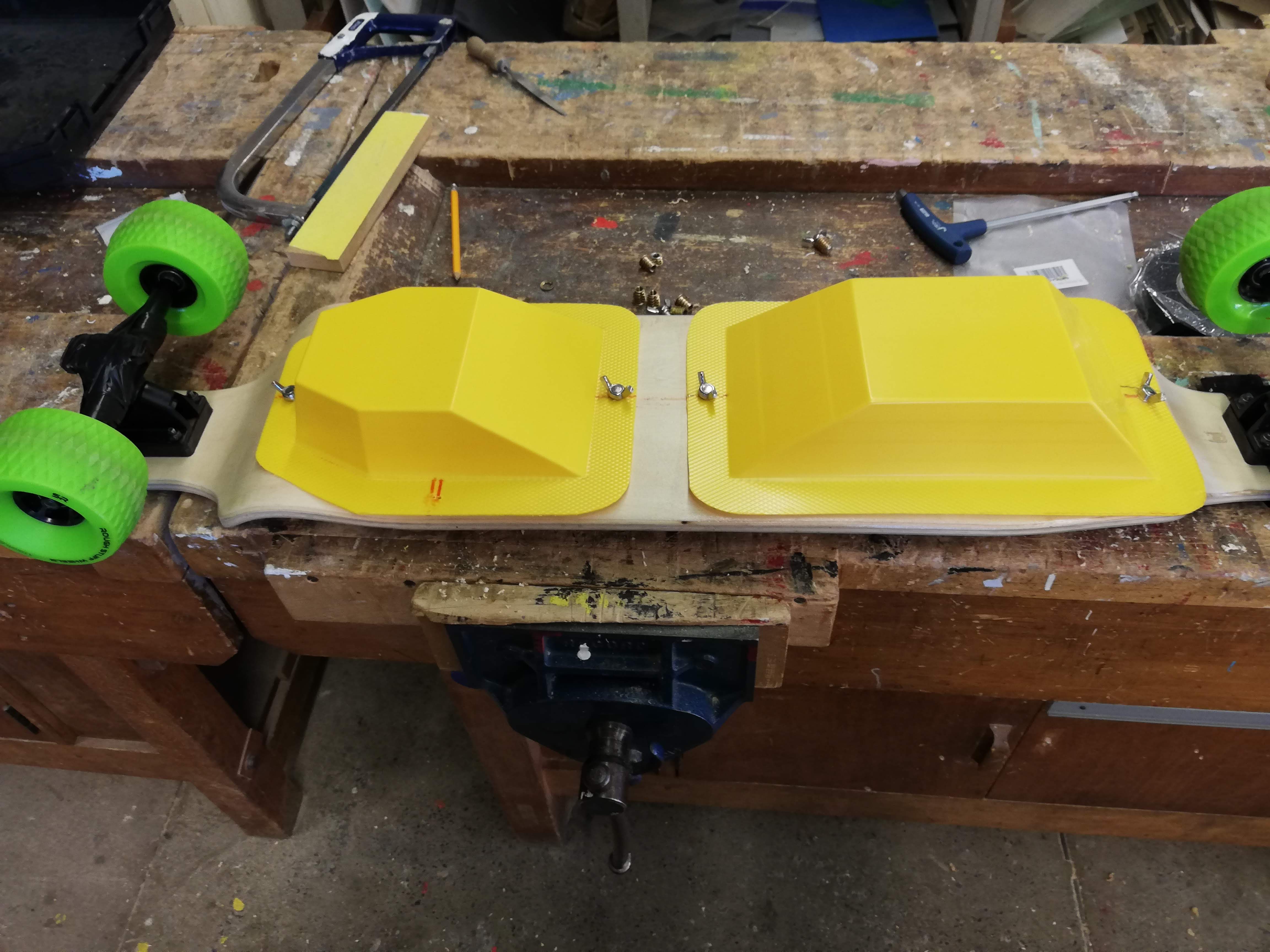 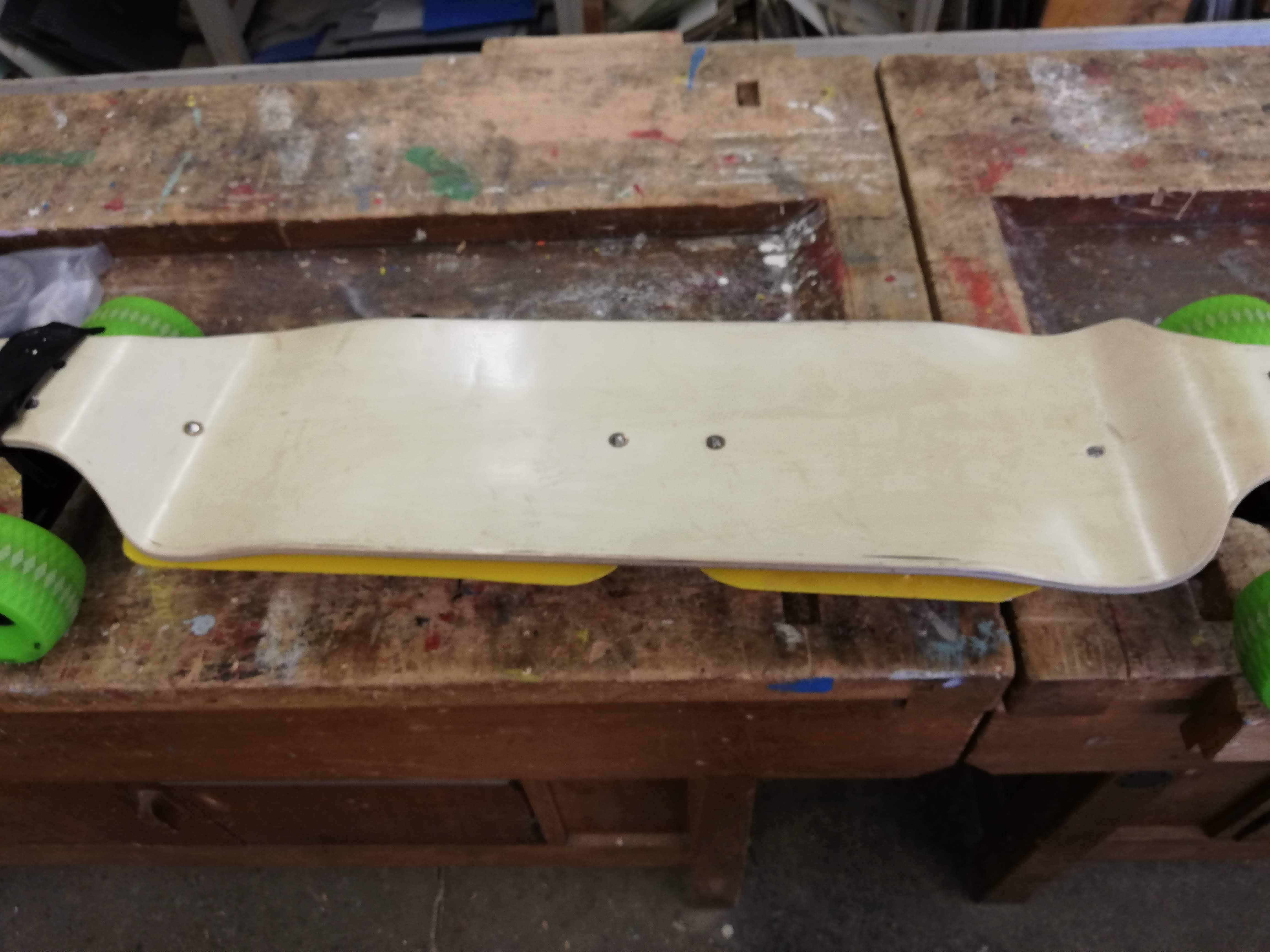 (I had to rip off the grip tape again to do this, which wasn’t a problem as I want to add HEXAGON grip tape on later anyways)

I then added in the side Threaded Inserts and used a heat gun to mould the vacuum form around the shape of the bottom of the board, which worked…ish.

My motor mounts arrived from HobbyKing:

And I screwed them onto my trucks, did a test fit and thought about adding thread locker. ( I decided not too just in case I need to take them off when fitting my pulleys. 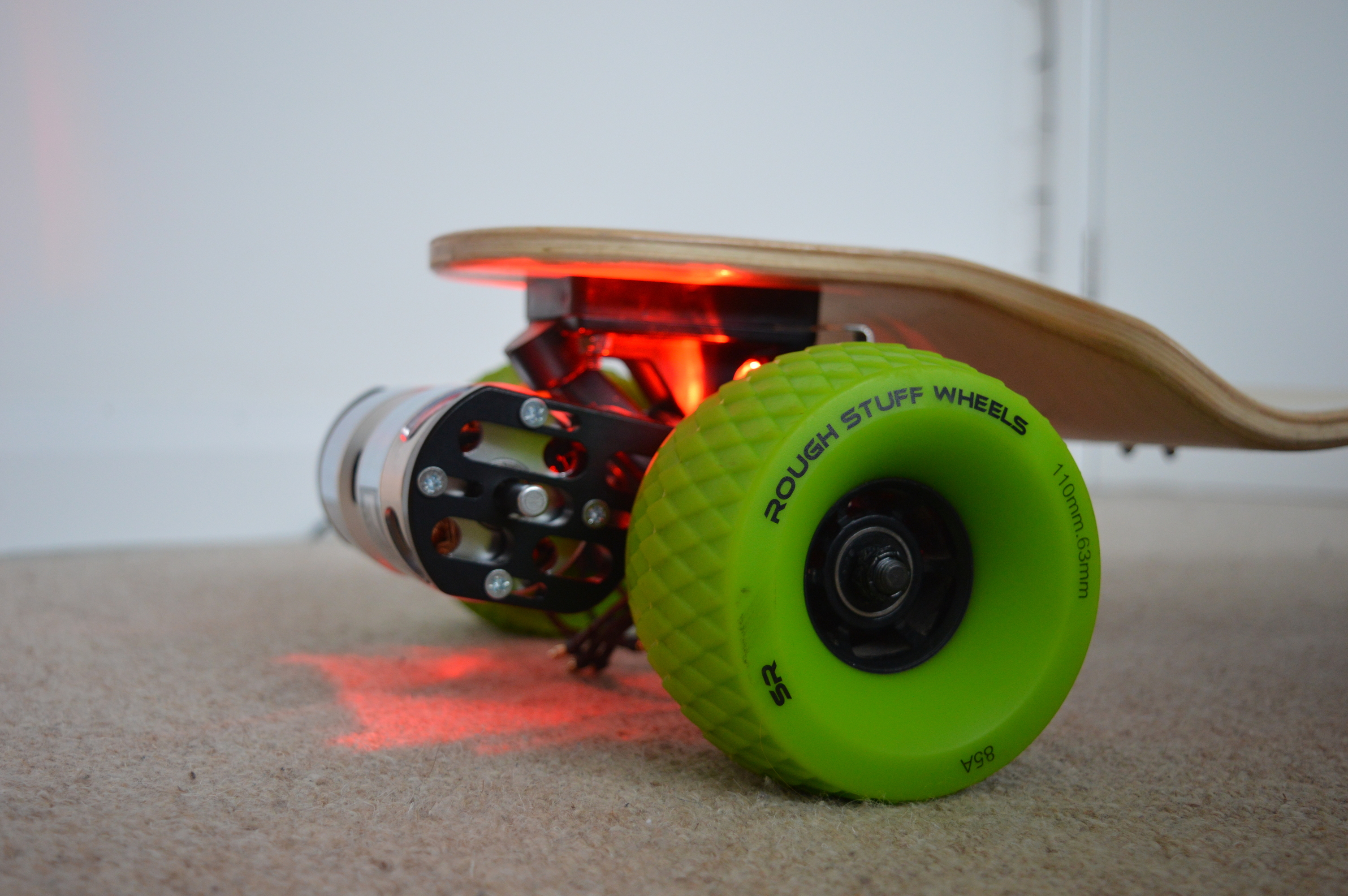 I then got my wheel pulleys from Slick revolution and just need to file down my truck hangers in order to fit the supplied bearing over then voila, when I get my belts and motor pulleys, ill be good to go. 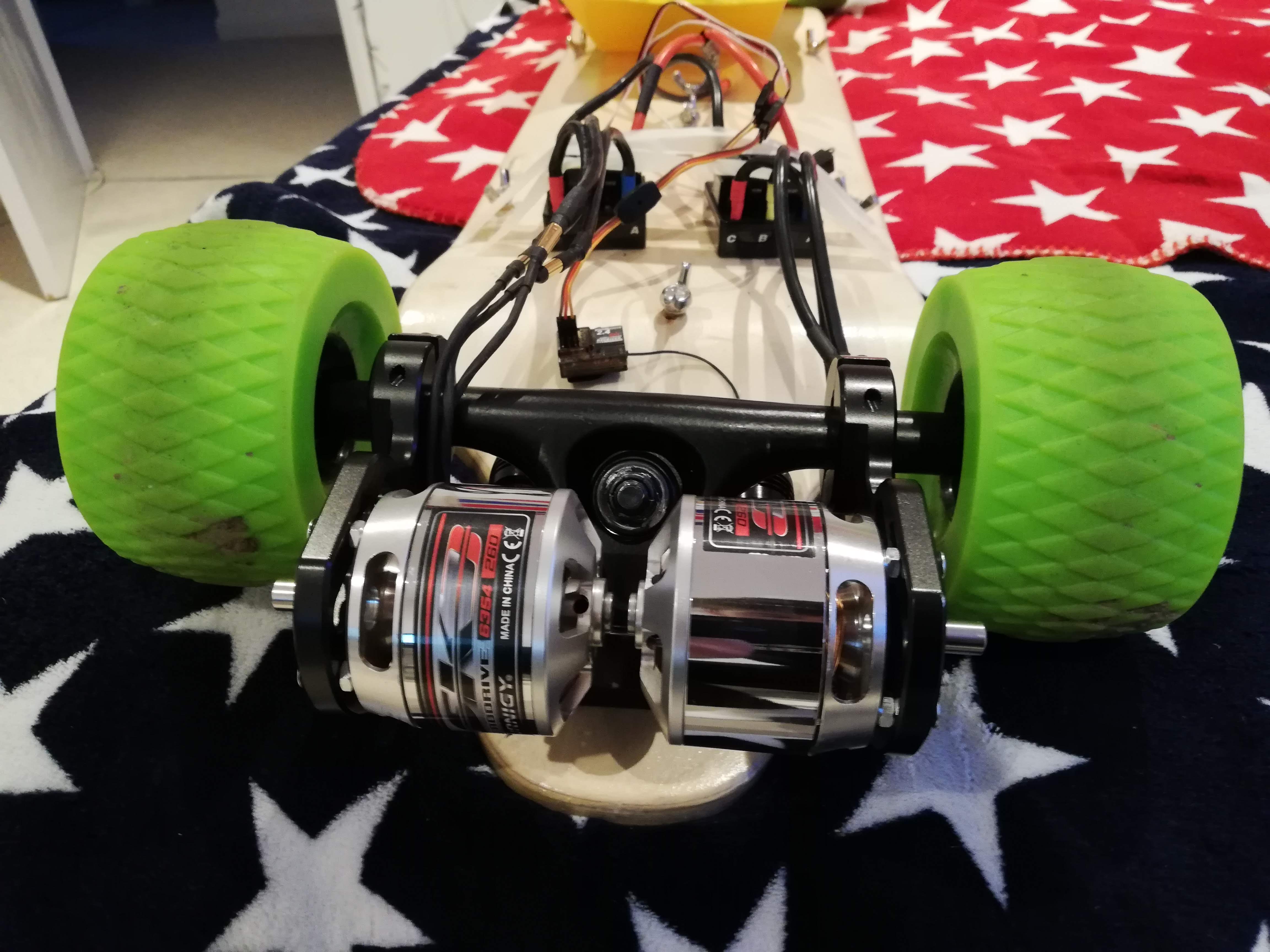 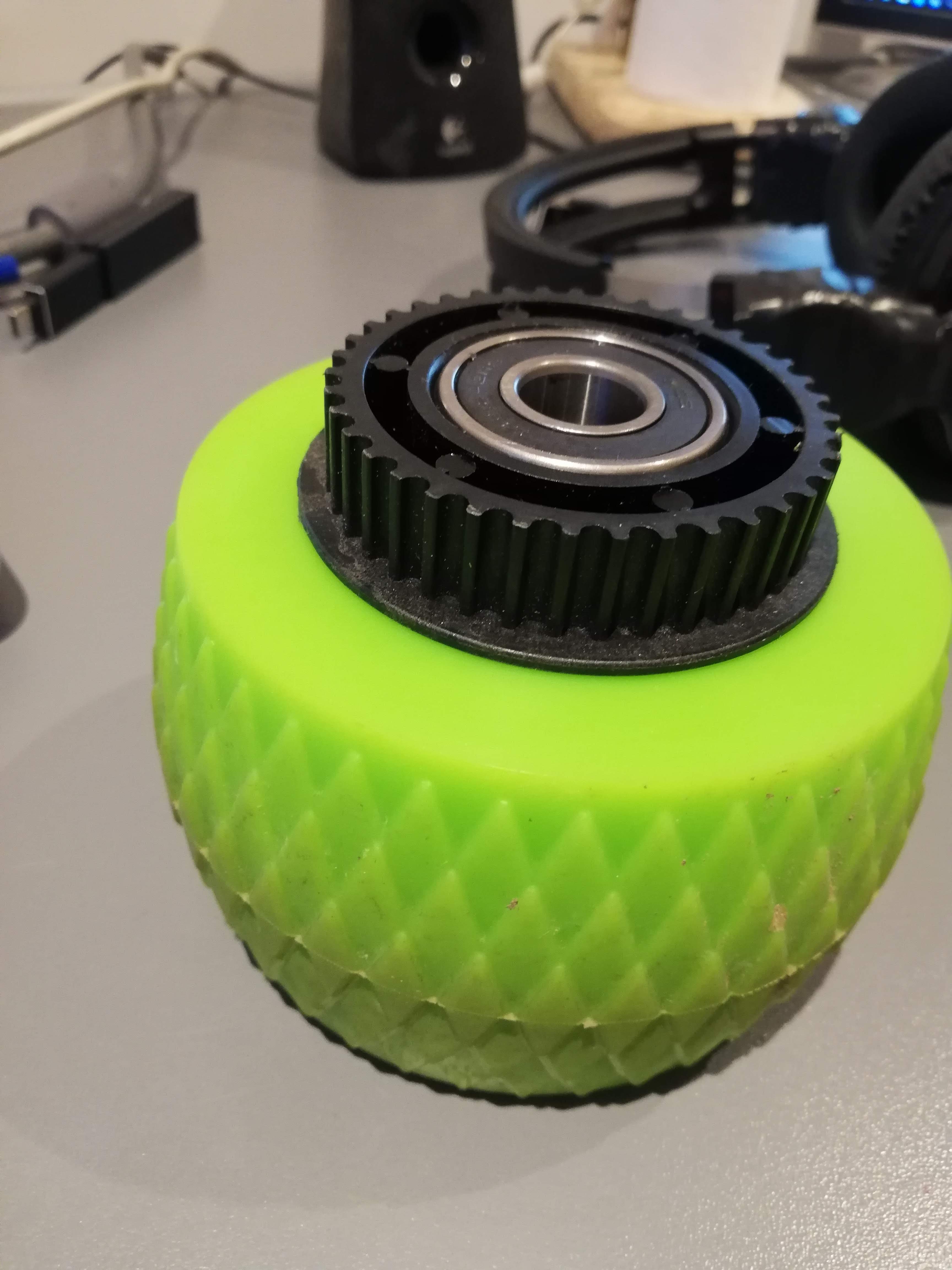 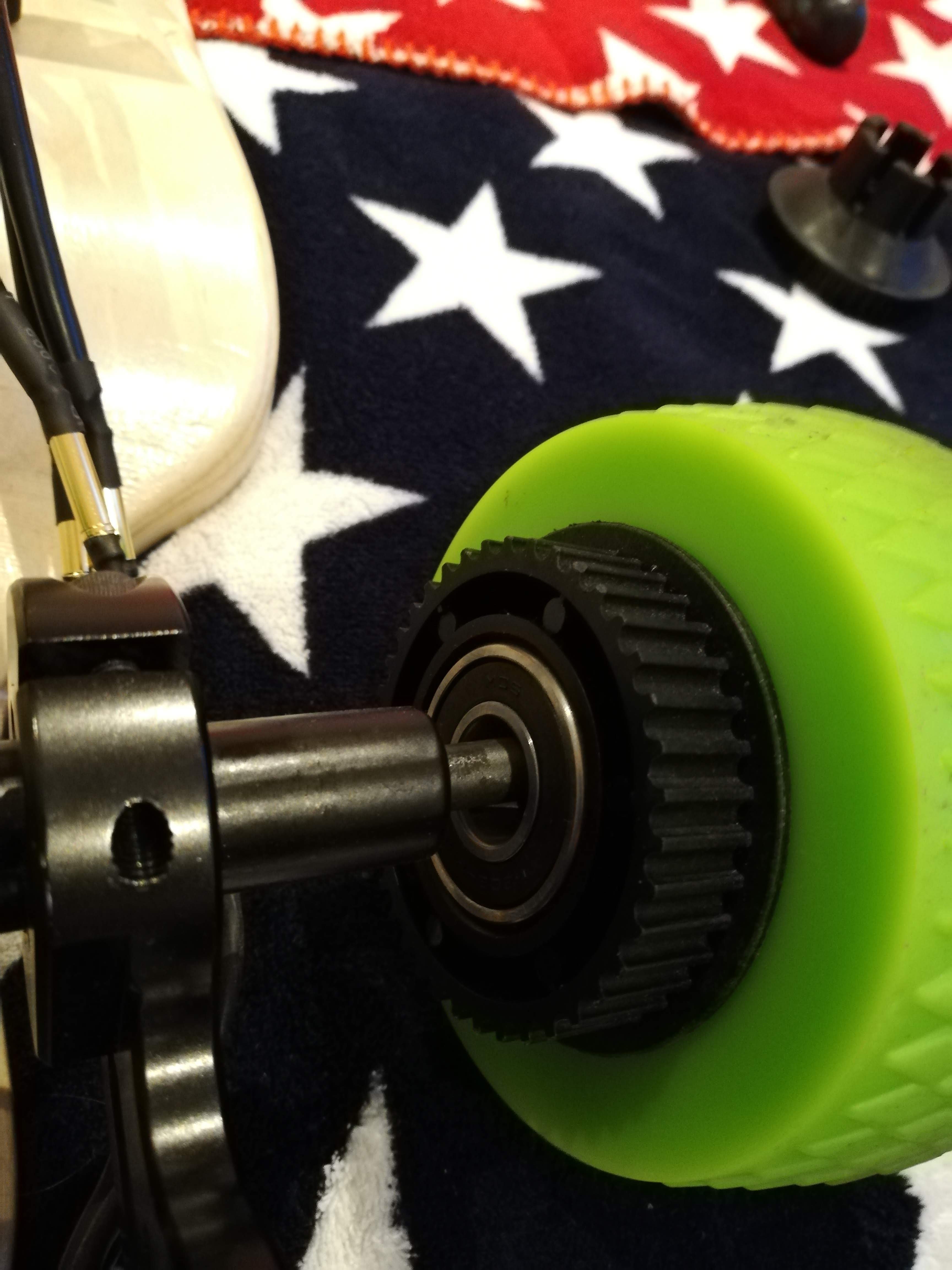 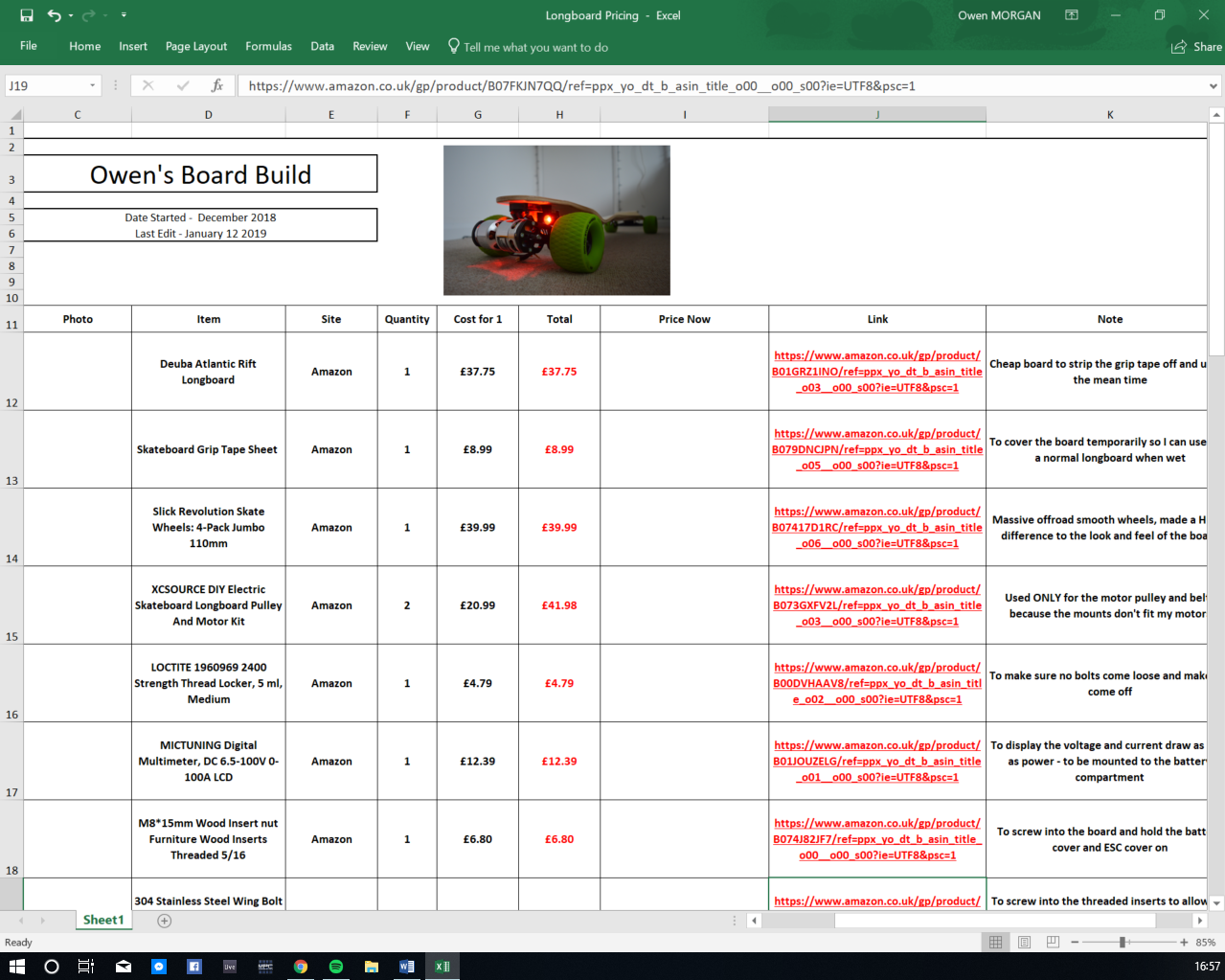 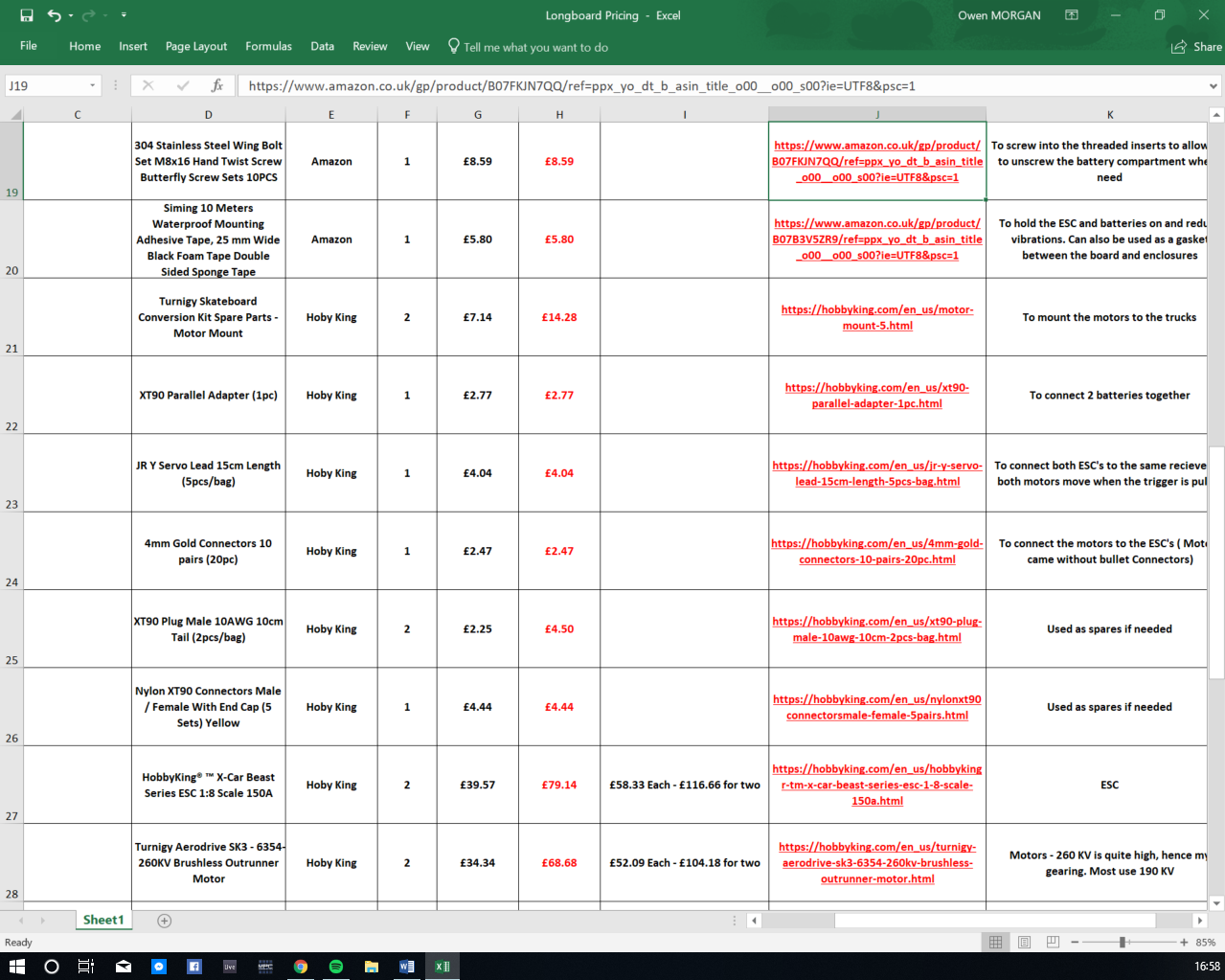 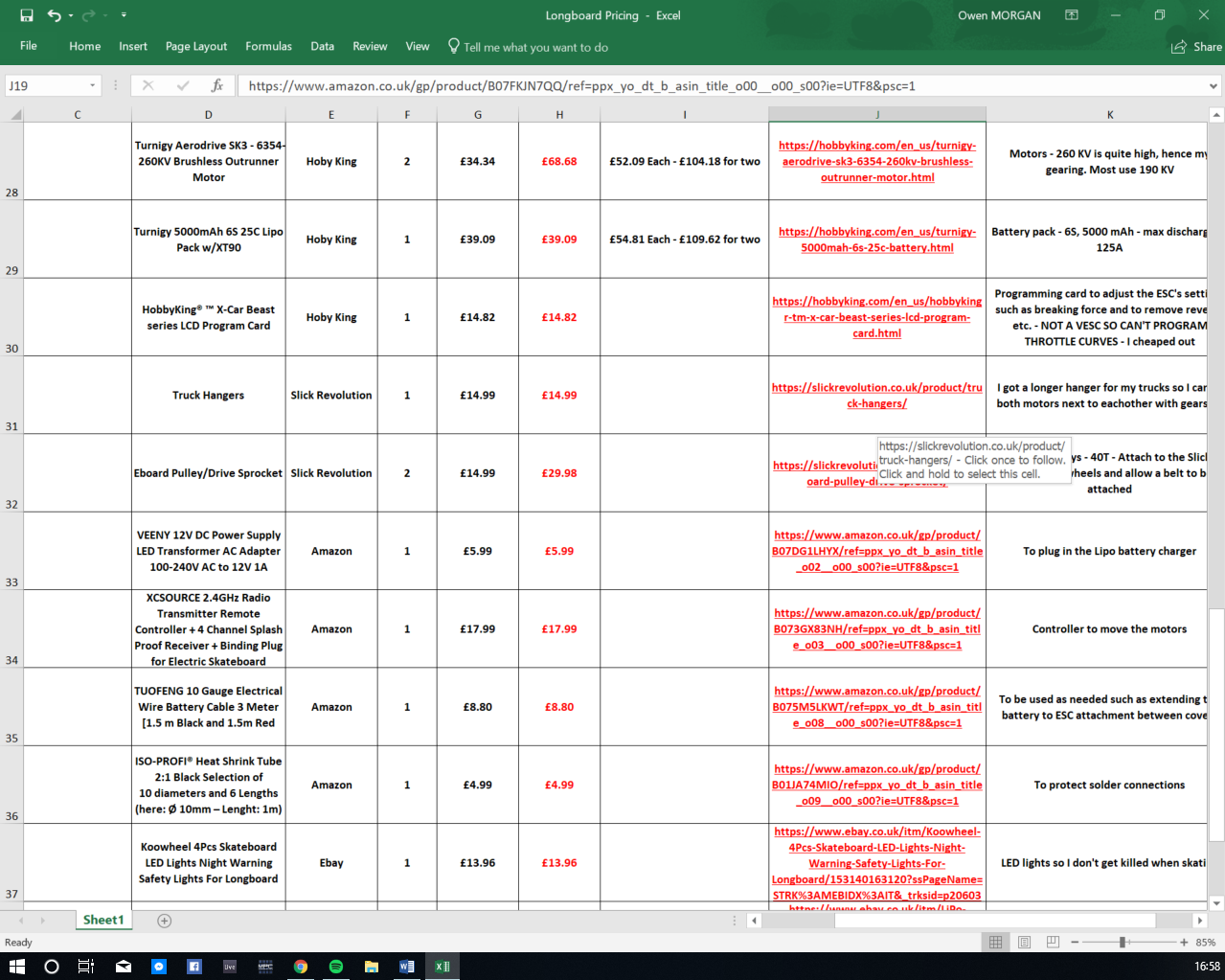 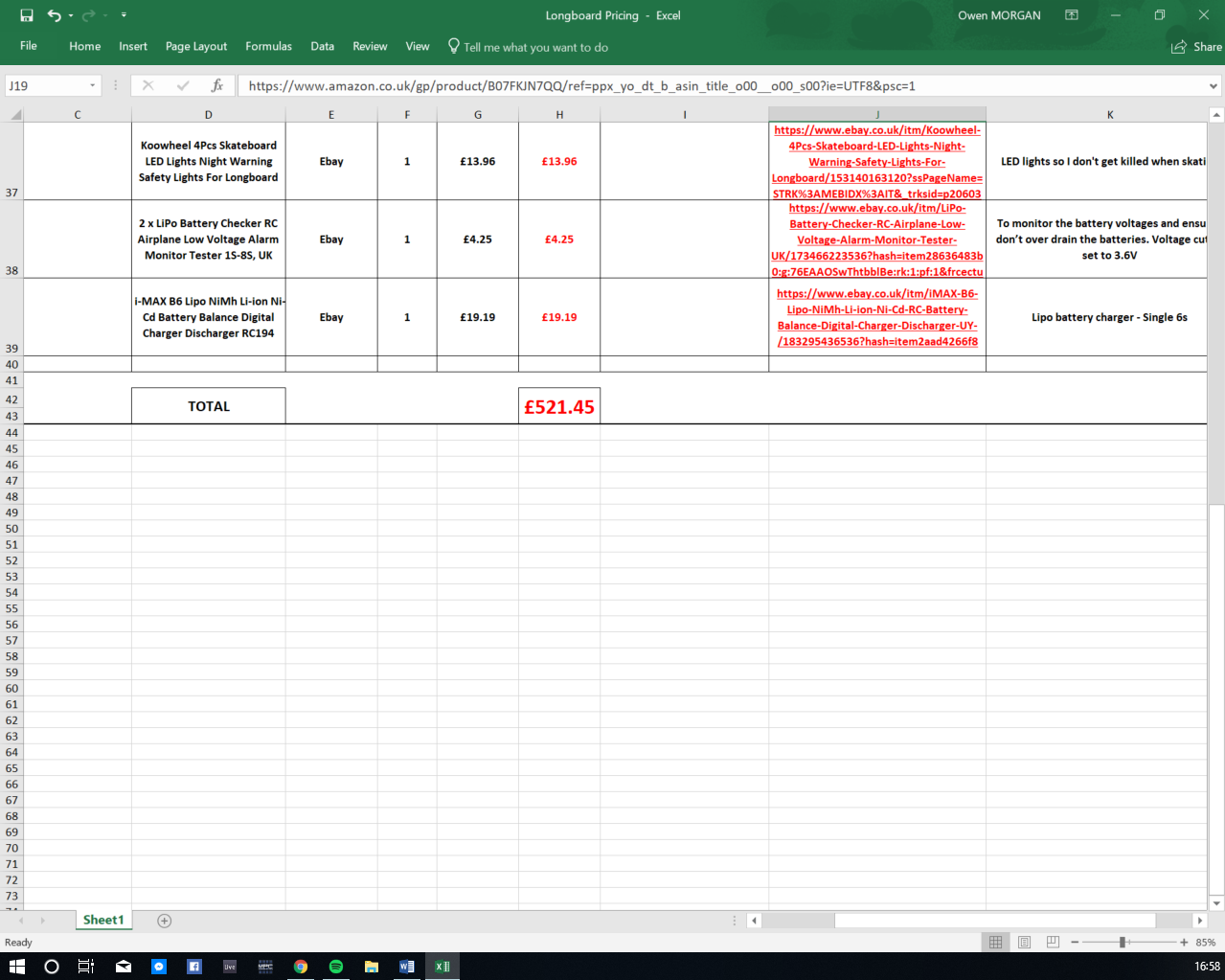 That vaccum form machine in your house? :o Or school?

At school, I wish i could afford something like that at home!

Hmmmph I mean it’s a cheap build, and no problem with, mine is cheapish too, but I think it’s not the best idea to get esc for such a build, especially when vesc 4.12 are so cheap now : for just few pounds more it would be better… Also 6s battery with 5Ah and pneumatic wheels… Your’re not going far with this…

Yeah, I know. I mentioned in my post that I’d be getting another battery, maybe 3 more. I also mentioned that the ESC’s were only temporary as they were so cheap and that i’d be upgrading to VESC’s in the not to near future.

it’s gonna be great then ! Good luck with that !

There it is! Always do a thread for your ideas my friend. Helps you and helps others doing similar things. Looks great! As soon as you get a chance upgrade the esc to vesc. The HK SK8 are a good enough unit. As you know the battery is too small really but you got that in the pipeline so all good and the motor mounts are one sided so when you come to align the pulleys you may run into issues.
Great stuff and good luck with the progression.

Cheers mate, I also have the Sk8 6364 so once I get a VESC, will go single drive 12S I think. Also, what do you mean by the one sided mounts?

If you look at the mount they are identical. They should be mirror images of each other so that the cut away section is on the opposite side. You can still use them dual but you have to go dual diagonal or one motor reverse and one under the deck. Clear?

Ahhhh, I understand thanks (ish)

I’m not sure what you mean by the cutaway section?

Look at the mount and where the motor fits the area is half the thickness to allow proper alignment of the pulleys. Looking at the image 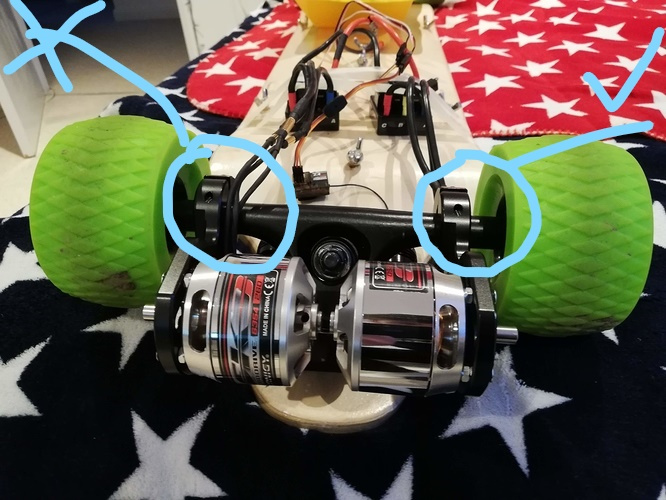 One side its flush and the other side is stepped out. Looking at it now though you might be able to turn the one on the left expertly marked with an x upside down to keep the outside(wheel side) face flush. Try it and see if the motors will still sit at the same height and angle. Doubt it though.

I understand now. I should’ve though of that when I ordered it.

I guess I can turn one over if I position the motors at a 90 degree angle to the trucks (straight backwards), but that’s if I struggle for clearance, which I probably will…

Cheers for your help!

They’re paris trucks though aren’t they? Round profile? Or are they caliber style D profile? Should work if they are paris.

Yeah, very cheap Paris style trucks, so will mount at any angle which is nice. I just want to keep the rear mounted style because I think it looks cool ;).

I get my motor pulley and belt tomorrow or Tuesday so will let you know what happens. 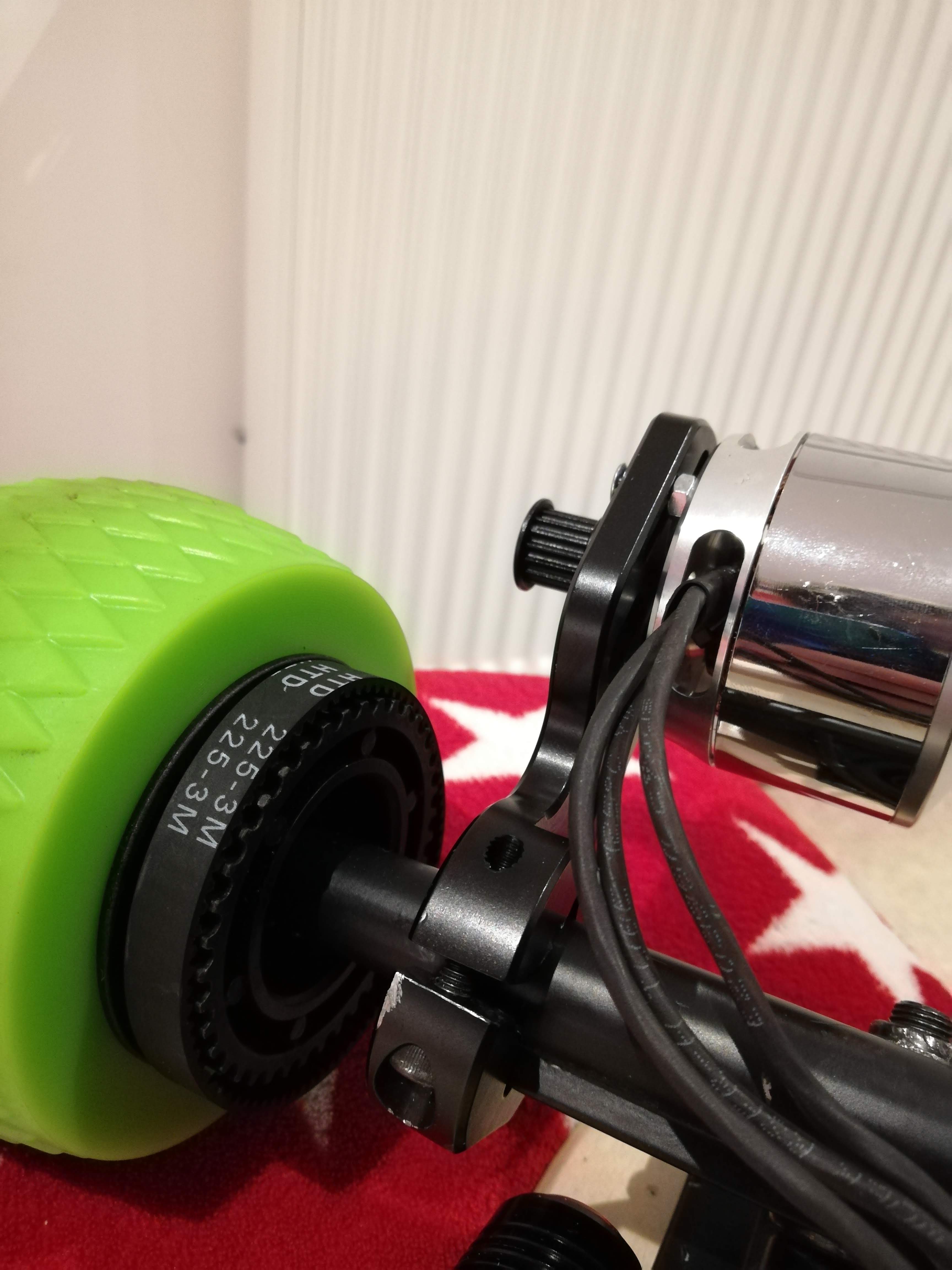 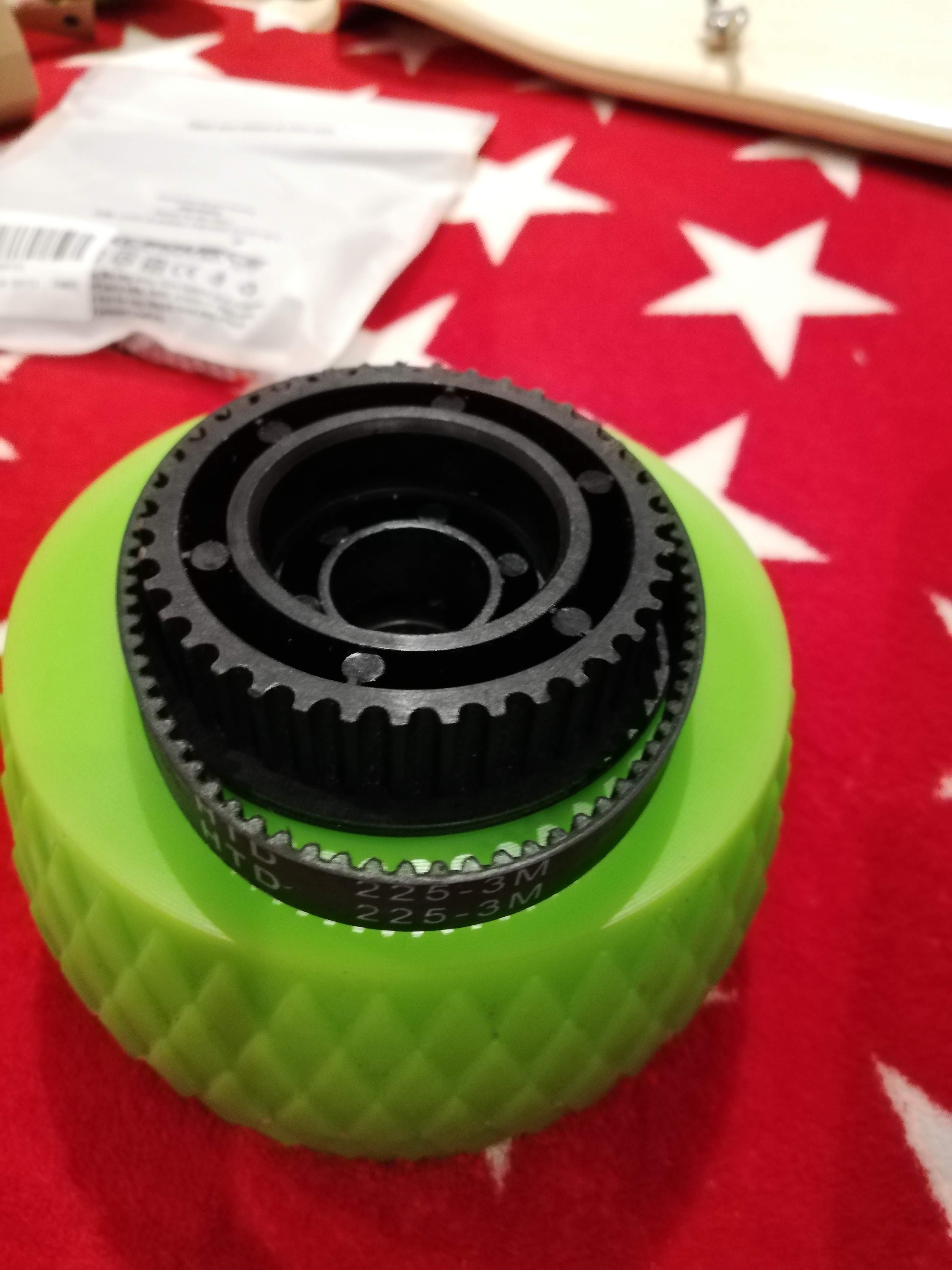 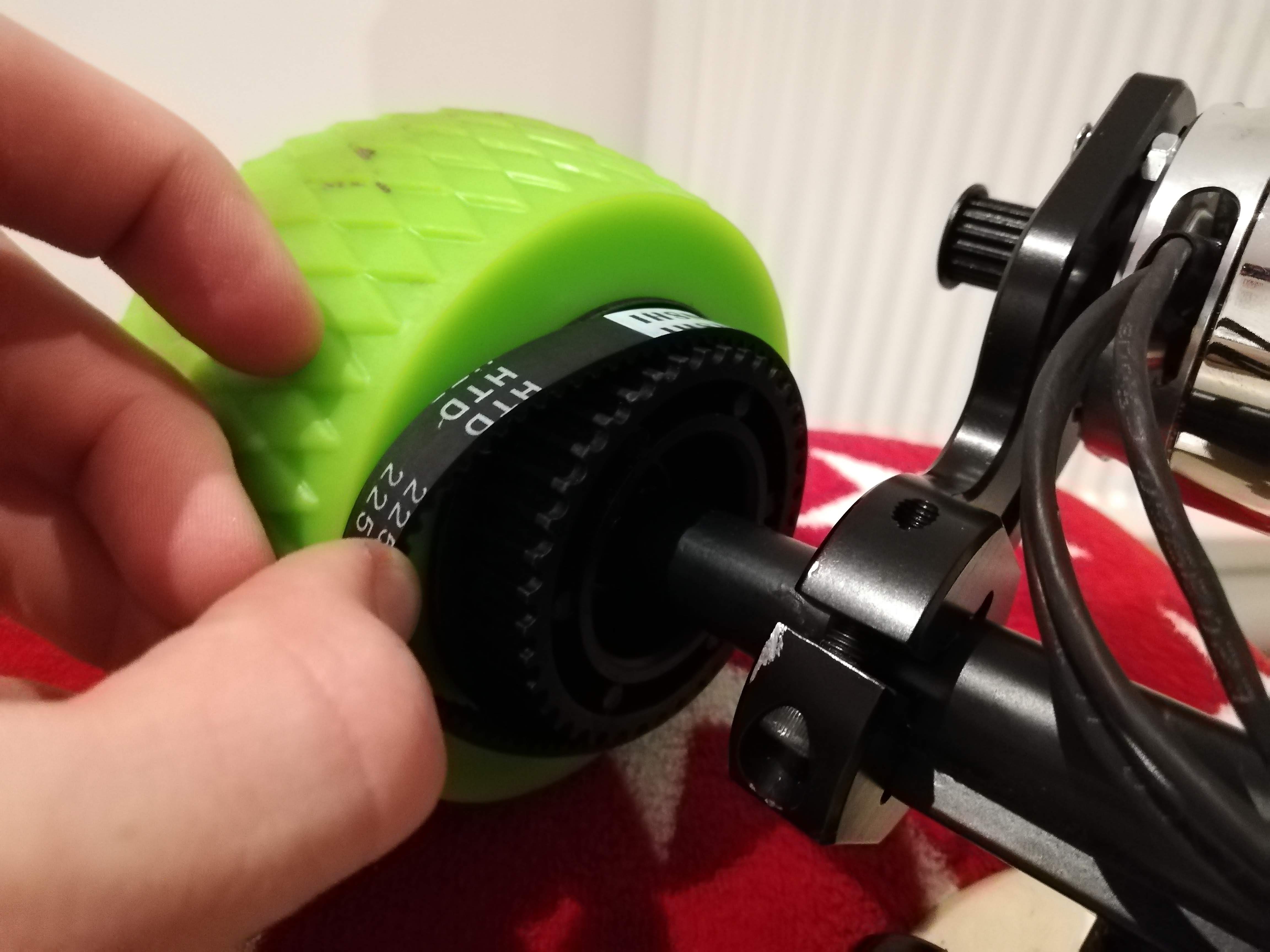 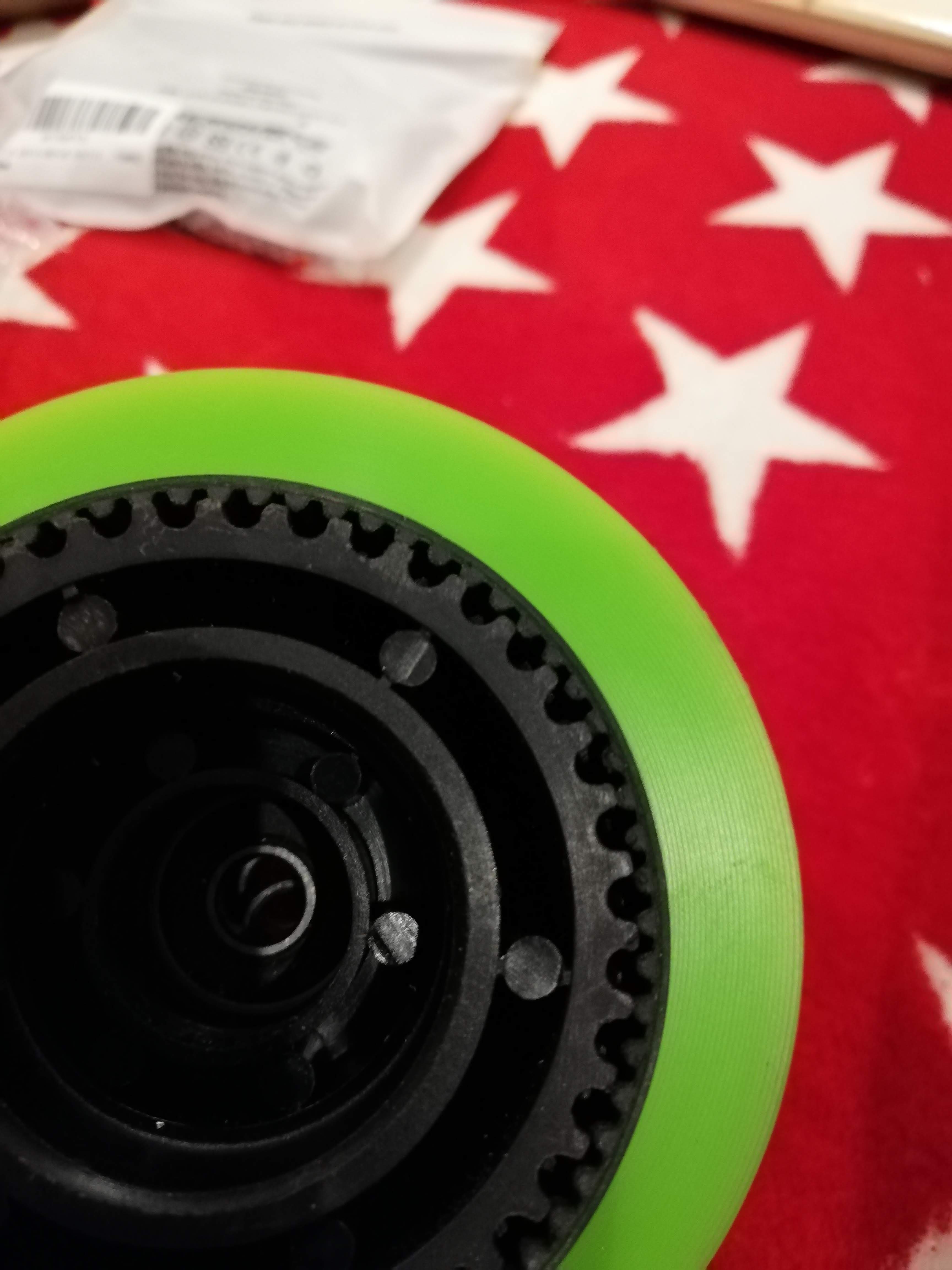 Forgot to account for the fact that i’d need a longer belt and I guess the pitch of the motor pulley and wheel pulley are different?

HOW DID I NOT CHECK BEFORE ORDERING

Me being dumb thought that the pitch is kinda standardised but looking at the belt now, clearly says HTD3 not HTTD5. I wish they had advertised this on Amazon so I didn’t keep wasting my time

Does anyone know the best place to get 18t HTD5 motor pulleys? Also longer belts?

Well made man. Make a nice Esk8 and do not spend too much is remarkable. Well done. Sick deck for the price. I hope that the max load pf 80 and something kg is a bit underestimated

Let we know how the wheels ride. They are fair cheap for being 110mm wheels. As other suggested upgrade to vesc when you can and a bigger battery too. Your build can be a rocket of you balance the esc and battery with the motors. It’s a pity you missed the Flipsky 4. 12 vesc at 6.89 euro this morning. Some guys bought way more then needed maybe they can sell two of them to you for cheap. Check the last messages in the TaoBao’s thread.

Flipsky 4. 12 vesc at 6.89 euro this morning. Some guys bought way more then needed maybe they can sell two of them to you for cheap. Check the last messages in the TaoBao’s thread.

how many people knew about this

The wheels run like butter and yeah, gonna need a new deck…

Thanks for the info, ill have a look now!