Guys just found this forum today…i was on endless-sphere.

So i got what appears to be like one of these motors off ebay about a month ago.

Wasnt a good expirence it only lasted 2 days shorted out and died. I was only running one and im thjnking of gettjng the dual drive setup. I ride flats im 175 lbs.

What temps are normal on these motors? I was going to build a little thermal cut off circuit to prevent this. 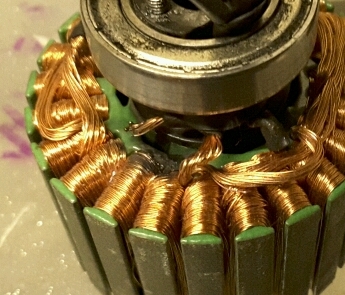 Before it died it got prety hot and this happened.

@Luke is this what happened to yours??

Looks like it, @michaelcpg or @blair can confirm. Would be interesting to see if they had vibration from slipping utathane that caused that.

I think the motor was too hot and the urethane didn’t like the heat. Maybe it is not a good idea to go with just one hub. What about voltage of your battery? Jacob’s hub motors were always known as they stay cooler then other hub motors. Is it still like this or not? Do other people also have temperature problems with there hubs? These hubs are not from the latest batch (holes are different). Are there any other differences?

Is it relly a hub from Jacob? Did Jacob selll Hubs with blue urethane??

that is not a jacob hub motor but a similar clone.

although it looks like it has had a similar issue with the urethane.

Guys just found this forum today…i was on endless-sphere.

So i got what appears to be like one of these motors off ebay about a month ago.

Wasnt a good expirence it only lasted 2 days shorted out and died. I was only running one and im thjnking of gettjng the dual drive setup. I ride flats im 175 lbs.

What temps are normal on these motors? I was going to build a little thermal cut off circuit to prevent this.

not sure if this will help, but @michaelcpg sent me this when he was trying to fix my hubs was he able to fix it?

Luke thanks what’s your story ?? Mono drive overheating?? I hoping the next set with the dual setup has no issues .

Michael was unable to fix it. They’re paperweights now. If someone wants them for experiments, I think I can give them away since PayPal didn’t say I have to do anything with them for winning a dispute. Do you want the full story @ralphy? I had a few issues. I had dual hubs, power was plenty, durability needed fine tuning. Hard to tell you if dual motors will stop overheating issues as they’re slightly different hubs

Yeah id love to know how long they lasted. I’m shipping this one back in a few days. Personally my father and many friends are electrical engineers. The windings are done in a horrible manner. The multi copper strands creates high resistance improves the skin effect of energy transfer but only a little. The high resistance is what kills these motors with the added internal heat building up with the road friction heat. Some active cooling will probably help and bigger holes. I might put some high rpm brushes fans blowing a shit ton of air.

What were your riding conditions, temps and durability? What makes your motor different to mine? It looks the same you just took off the bearing for the pic.

It’s not a paper weight I can tell you how you can rewind it with a single solid copper winding.

Yes those hubs are crap unfortunately. They are the same as Jacob hub motors. Except Jacob puts them in a fancy box before he ships them out. I pre ordered and waited months for them to last exactly 5 miles before the urethane slipped. A week after I finally received them he sends a mass email out stating that they could be dangerous if ridin because of slipping issue. Of course no refund nor does he even reply to emails anymore. Seems like one huge Ponzi scheme. Hopefully you didn’t lose as much money as I did on them but I definitely steer people away from them when I can.

Well I did over 60 miles with no slip issue. It only slipped because I was running one motor and overheated . It’s not crap but it needs improvement.

Making the urethane fit a couple mm in diameter smaller and increasing the ridge between supports with a carbon fiber hollow rod and a 3mm threaded rod running across will slice the slipping.

Anybody knows that when you don’t want something slipping you don’t make it shinny and smooth. Common sense

This is prob not a hub from jacob guys, i bought it from an Asian seller .Heating is an issue if running just one. Im getting a new pair from a different seller at a lower price and i can report back.

I was also told by john from steelhubs that i should check my vesc for some ramp up software bug that causes heating issues in these motors. He stated that ramp up bug in BLDC can cause a good motor to overheat and die.

John i think makes thise hummie hubs and was really nice and helpful in providing insight despite the fact i didnt buy his product.

How the heck does this not get tested before mass manufacturing?

the first batch was made with a different urethane that didn’t have any slipping problems. apparently when the second batch was made there was some change in the thane and it started slipping. although it can apparently be fixed with double sided tape on the motor.

So has anyone ran these successfully without overheating ?

Hey sorry I was asleep @ralphy. Here’s the best I can do info wise, let me know if you want more info: I got them in the mail, bullet connectors weren’t soldered on properly, no biggie, I put them back on but worth noting. They worked fine till I tried going up a fairly steep hill a few days later. Then one of them slipped. It went back into place and slipped for the next couple days. Then the second hub started slipping and it became unusable. Then I showed them to Blair and he put double sided tape on and they were working great again. 2 or 3 days later I was riding in town and at one point I got no power. I took it home and the next day Blair said it was a short. He fixed it by reconnecting the phase wire to the hubs but he had to burn off the epoxy on the ends of the windings. They spun again as if they were fixed till they touched road, then they broke again. I rode this as a Mono drive for about a week, found out mono drive can’t even get me up a 5% hill so not so fun carrying my board up Hills. Anyway, after a week the second one shorted, and that’s when I gave up, asked Jacob to repair/refund, didn’t get a response for about a week, so I told this to PayPal and let them make the call. As for riding conditions, often smooth roads, lots of riding around 10km/h and occasionally going 20-30 But every day that I had 2 working motors they would get me up a 200m 25% hill without overheating. They only got hot after a 1km 10% hill

Hmmm they look very dirty in the photos. Could the short have been it was exposed to water?

Ok, im trying to figure out if i should cancel out my order and go a different route.