This isn’t just my first DIY electronic skateboard - this is probably the first major DIY project I’ve undertaken and I honestly thought I’d bitten off more than I could chew for a while there. I mean, in the end I probably could have bought a Boosted board for not that much more, but I’m pretty fucking stoked with the result anyway. Pictures, specs and settings at the end.

I’m an Aussie which is generally a pretty dope thing to be, but it turns out the DIY scene here sucks. I was really limited in what parts were affordably available here, so the parts chosen are actually less my choice and more “that’s what you can get.” My main concern was the VESC: I was worried about it being under-spec’d (not many reviews on the Vanda on here), and I definitely wanted to avoid Chinese manufactured ones (too many bad reviews) so the Vanda looked like the best of a budget bunch. So far, it’s working great!

Most of the build came together pretty simply. The batteries have a couple of layers of electrical tape for insulation, and are then held together with duct tape. They’re mounted onto the board with heavy duty Velcro and an aluminium bar - Velcro keeps it from sliding and does most of the holding work, and the bar just makes sure the Velcro maintains contact. I couldn’t find a good cheap enclosure and don’t have the tools to make one, so I’m just using a 3mm rubber sheet. With plenty of ground clearance, this seems like a good enough option for my purposes and it doesn’t look too bad.

Originally I was planning on using the the board’s stock trucks, but there were no available mounting options due to it’s shitty design, so that is the only reason I got Caliber II’s and the Boardnamics mount. Both are great. Some Chinese pulley kit fit the MBS wheels perfectly.

I couldn’t be arsed to have a switch. They’re expensive. The XT90’s that came with the VESC were pretty stiff so I fucked them off and went with Anderson plugs. They work so well. That pretty much wraps it up, although I do have a couple of little tweaks I need to do (better clips to hold the wires to the board, some heatshrink and/or braided wrap for aesthetics on the wires, and a layer of Velcro between the rubber and the aluminium to hold it together). 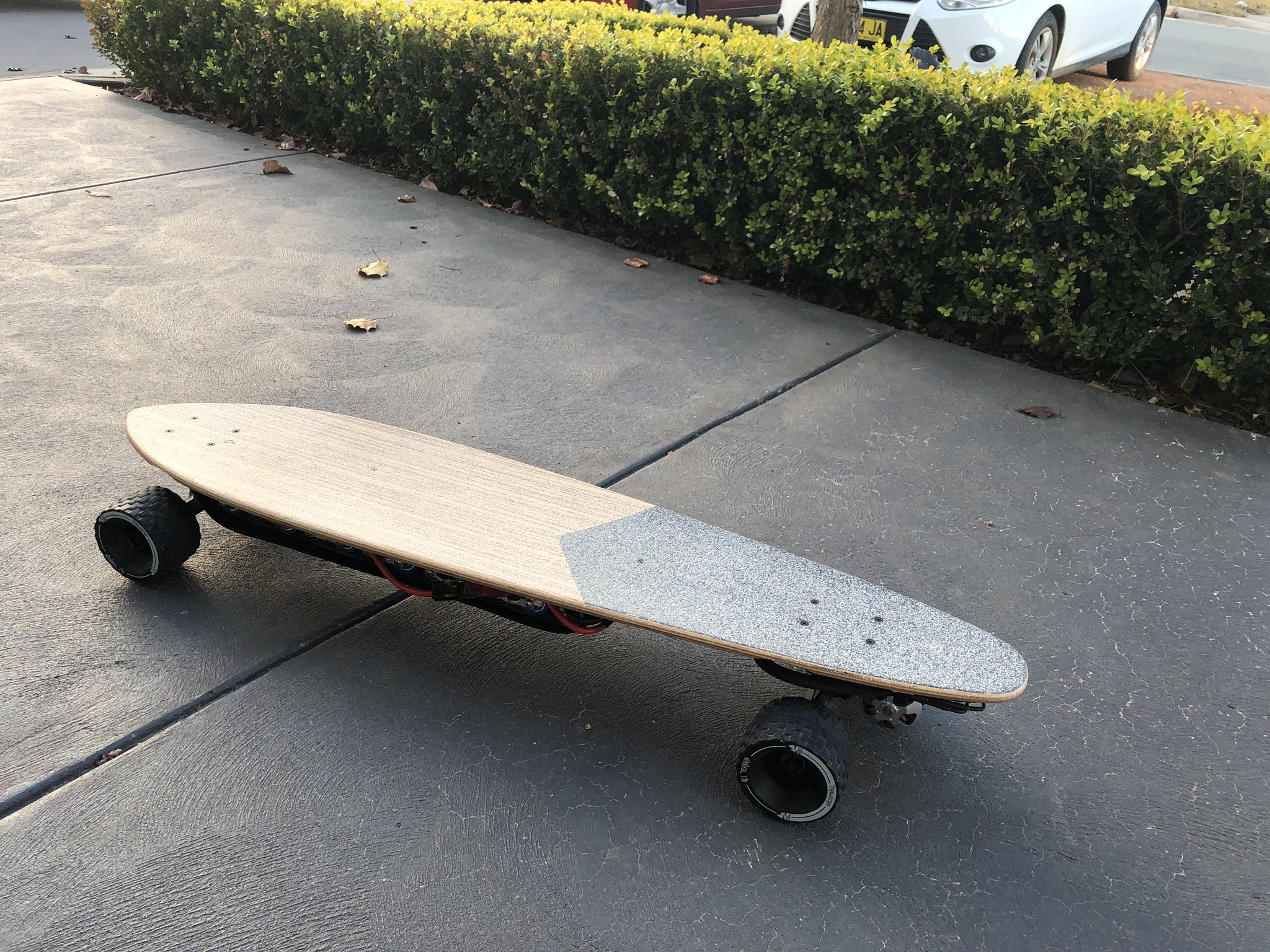 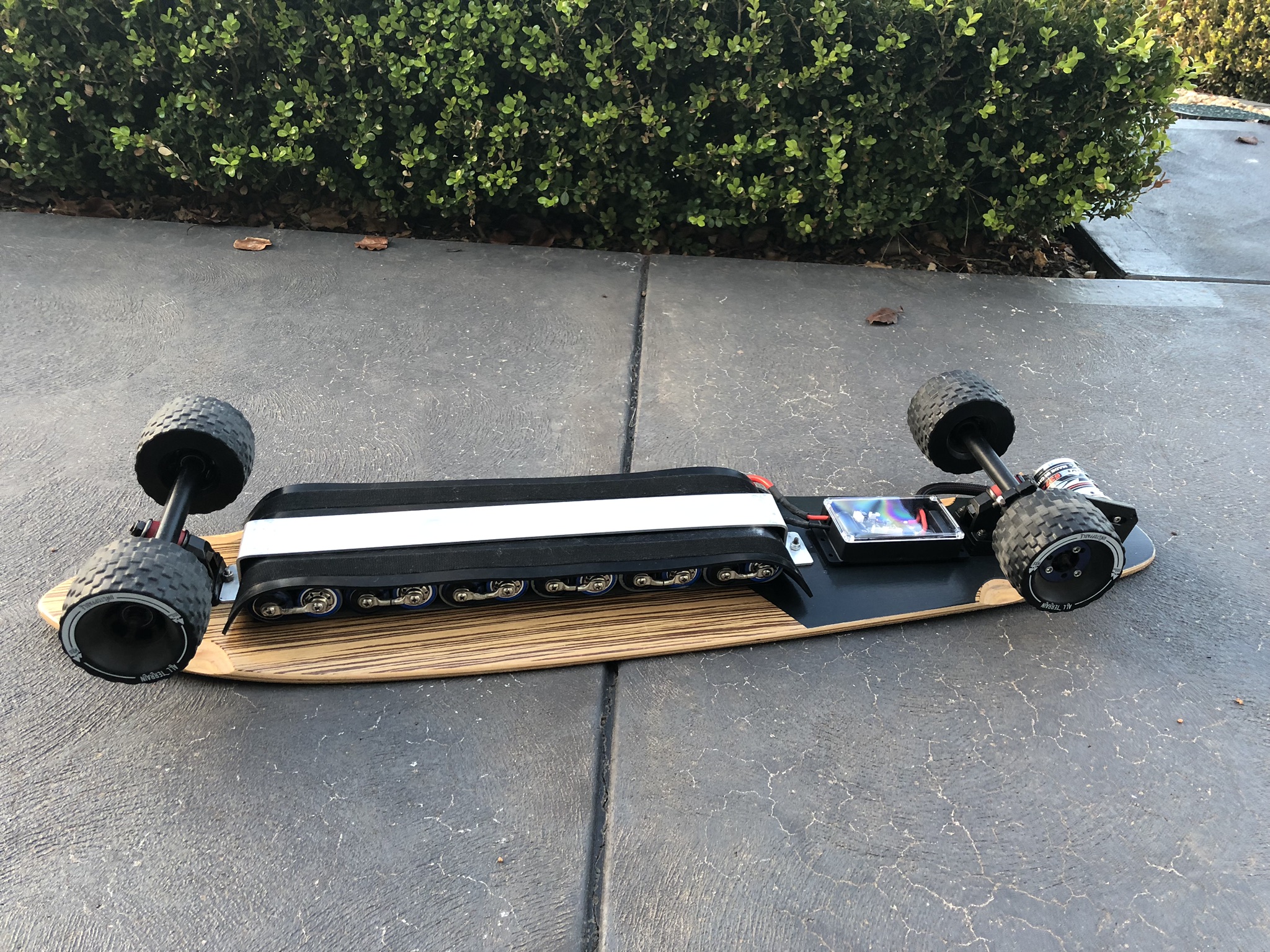 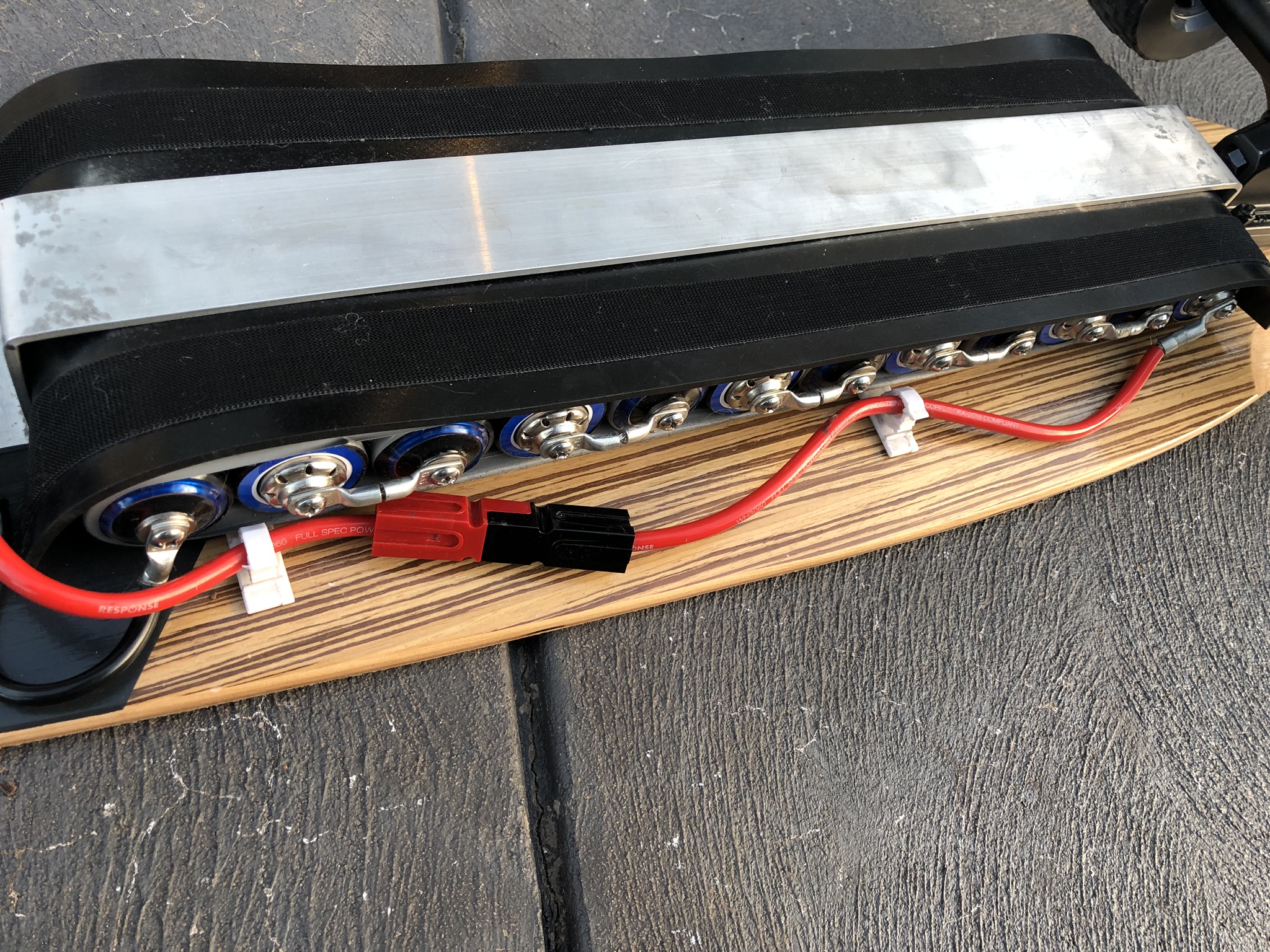 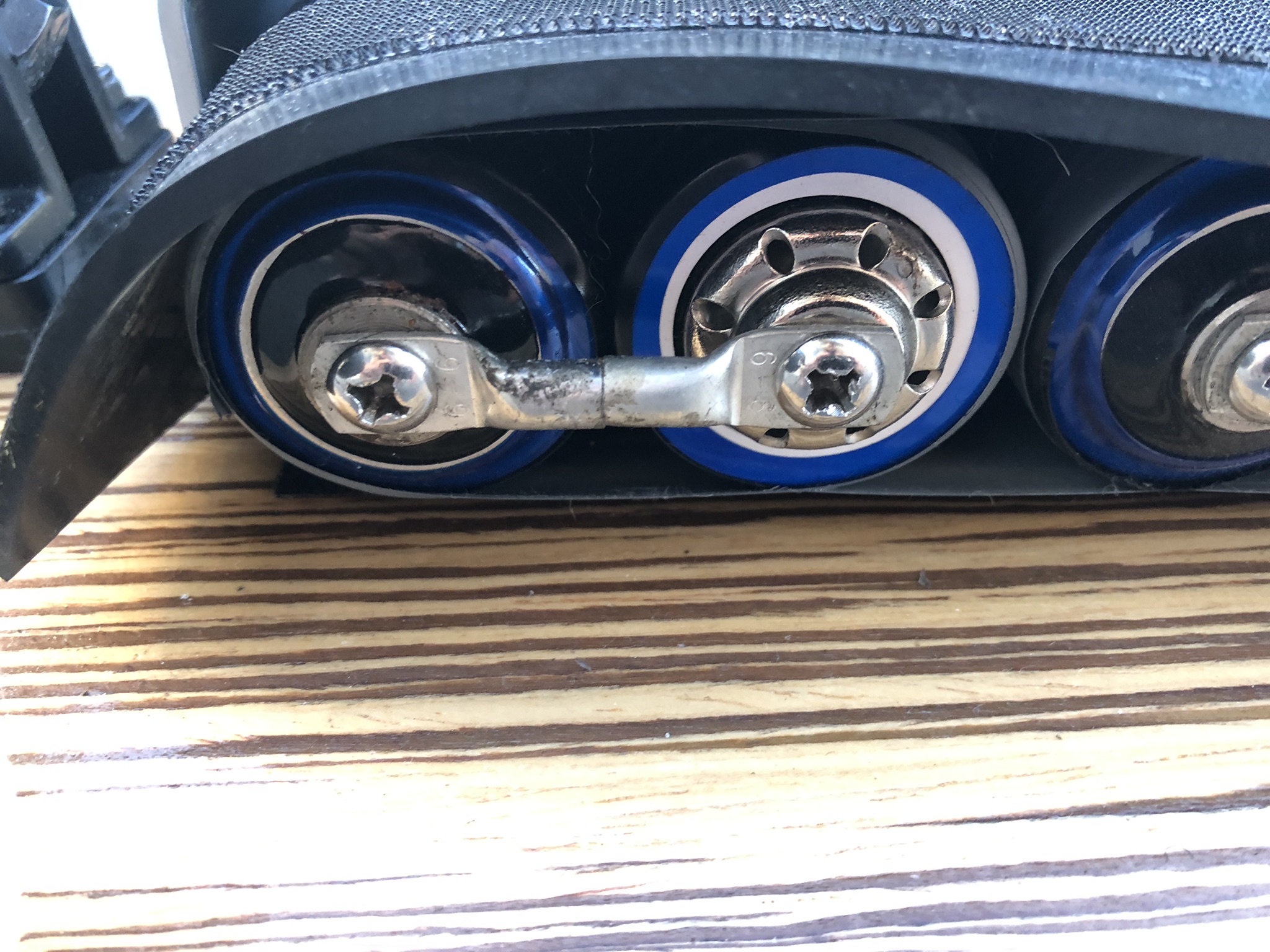 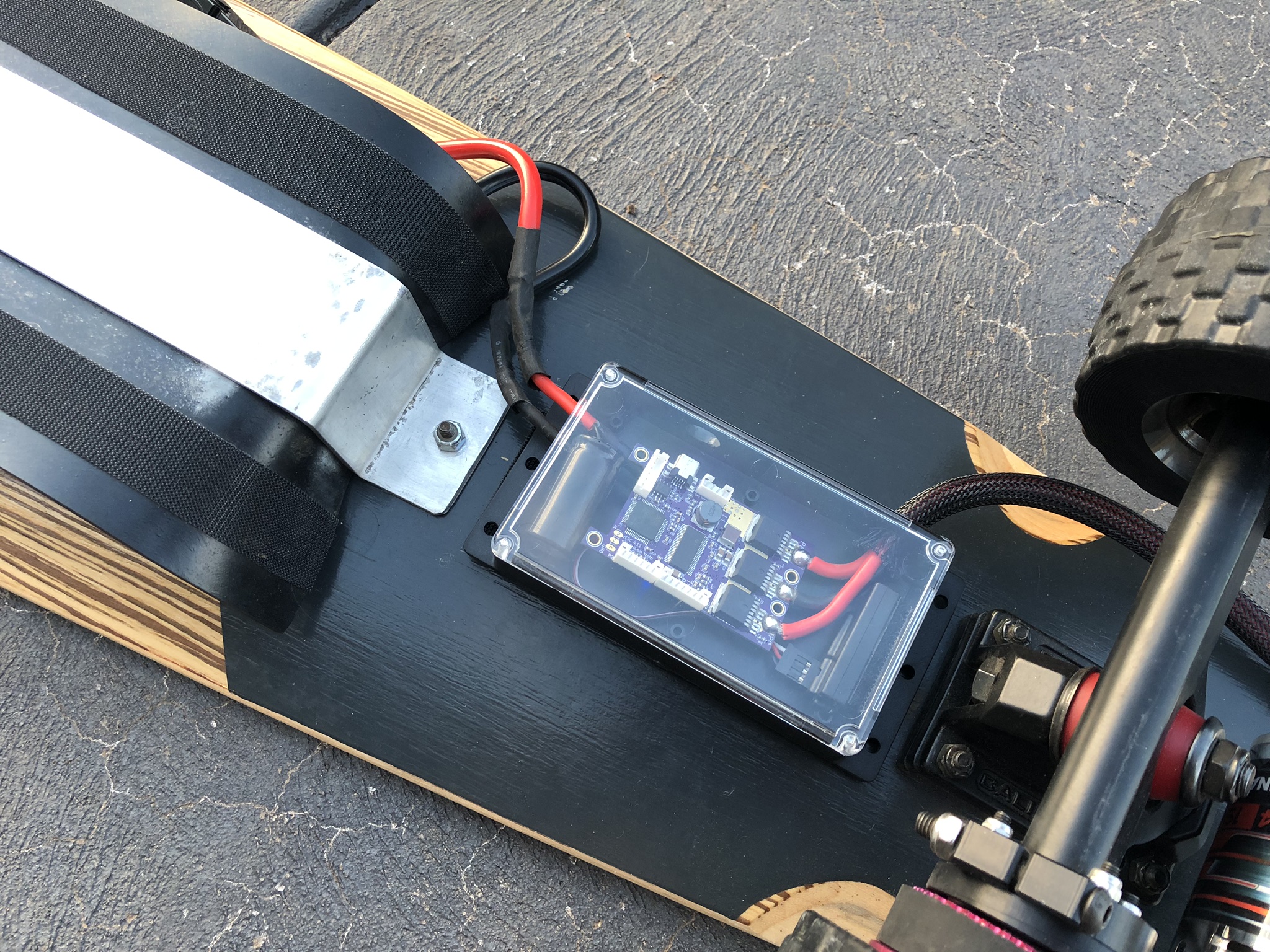 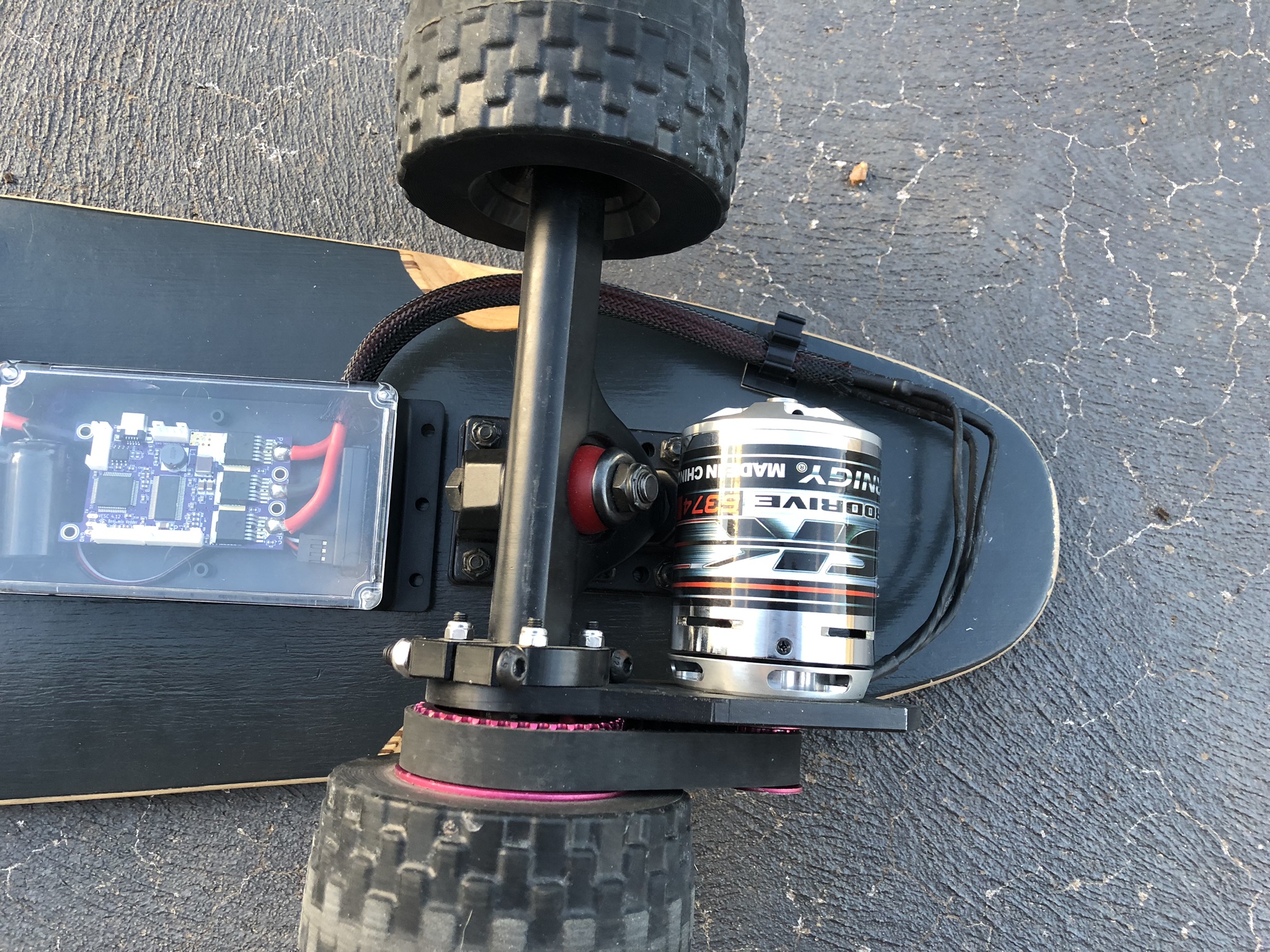 I like how you went with an unconventional battery, but please don’t ride it until those exposed battery connections are sealed away…

you would have to average 15.5WH/mile to achieve 40km

if you exceed 60k erpm your vesc will go boom (limited by 4xx hardware.)

the built in screw heads

It’s cool seeing something different. But yes please do cover those terminals with something.

please close up that enclosure. That looks extremely dangerous

hey man, thanks for this. all i’ve seen is don’t set it more than 60k cos of this. is 55k low enough or should i drop it a bit?

yeah that’s about the figure i used in the calculators to get the 40km. i did a cursory search of this forum and it seemed like that figure was a fairly common ballpark for some people’s average use. will have to see where mine lies.

dont mess with those settings.

there’s not many builds with them out there which is understandable. i think their regular price is at least 50% higher than what i paid for them plus their energy density is kind of low, so they’re not really a go-to product. but i got lucky with price and the specs fit my build well enough! hopefully this post throws a few more people in the direction of the 38120s because not having to spot weld is a bloody saviour.

i really dont think it’s unsafe at all without a proper enclosure though. i mean, whats gonna jump up in there and short the batteries?

i’m not riding cross country and i don’t think there’s much of a chance of something coming at the board from the side. acceptable risk, imo.

Wheels kick up a nail, nail shorts the batteries, or punctures them.

You drop an allen key, it shorts them.

Being exposed also makes them alot more susceptible to corrosion and water damage.

I can go on and on, but the bottom line is: protect them batteries.

I like what you have done there my friend. Something different. Interesting.
Working with liion and lipo has us all a bit battery paranoid but even though lifepo is inherently safer it would not hurt to get some protection on them.
What part of Aus are you in?

Working with liion and lipo has us all a bit battery paranoid but even though lifepo is inherently safer it would not hurt to get some protection on them.

anything related with lithium/batteries is inherently dangerous, especially cause of the power densities of the vehicles we build.

Lifepo are much less volatile and if it wasn’t for the size and weight would be a much better choice for esk8. Isn’t that right Brian? @b264

Energy density is also not as good.

the occasional puddle, starts to rain when ur out there.

lol, not the right mindset when you’re racing down a street on a longboard. If there is something you can fix that will cut down on the risk of u getting hurt, you should do it, no matter the amount of pads you wear.