Batteries are the greatest enemy of electric vehicles. There’s a strong agreement here that li-ion batteries are safer than lipos. And while yes, a single li-ion cell is safer vs a single lipo cell, li-ions have a weaker point. And this is the need to assemble 40-78 cells. With lipos, it’s easy to solder new wires to the tab. But with li-ions, you need to assemble it with either spot welding or soldering. Spot welding is the easiest solution, but it is less effective with copper, the ideal material for keeping heat down while discharging batteries, vs nickel. This leaves two other options, soldering copper wire to the cells or solder copper stringing to the cells. I copper wire in the past, and while it worked great, it increased the 65mm width of the cells to 80mm. So I decided the new idea, solder copper stripping. Calculated the amount of copper needed in each sheet to get the same copper content as a 10 AWG wire, cut them out, cut all of the corners and rounded any sharp edges. I had the copper strips bend up over top of the each p so that when connected, there would be a flexible joint (another reason I couldn’t spot weld the tradition way li-ion packs are put together). I put multiple layers of good quality 3M electric tape between the + and the - of every cell (since everything except the cap is a -). I thought I had eliminated all of the possible risks. But I had certainly missed something: 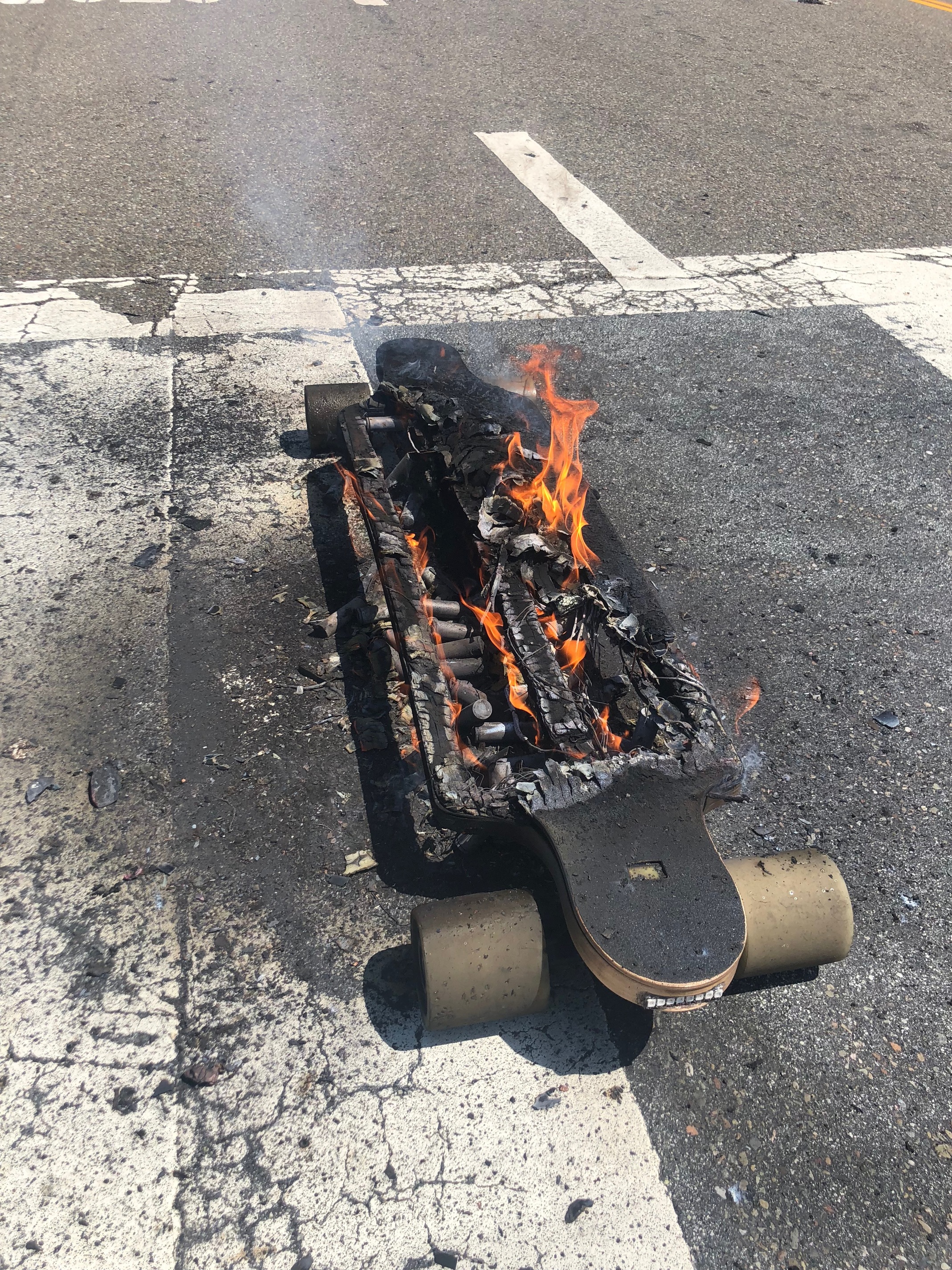 Just some context of what you are looking at. This is my prototype Rocket Deck with 4x hummie v4 hub motors. This was a 12s4p (48 cell) 30q li-ion battery pack assembled as described above. It included a speedometer, working brake lights and head lights, as well as turn signals that are controlled via the 2nd channel (the wheel) on the mini trigger remote. It had 4x 4.12 chaka vescs, and my really big spark switch (as I like to call it, haha).

2 factors that I hadn’t considered.

I will likely never know which one is was. But In my mind, it most defiantly was one of those 2 cases.

As to the story of what happened, I was on a joy ride with a friend who was biking. I took this ride so I could put more miles on these wheels, since it has been the biggest issue with all hub motors, including hummies in the past. The wheels (and board) had been ridden over 200 miles at this point. About a mile in while in the bike lane and slowing down for a stop sign (during regen), I heard a loud hissing sound. In the past, with v1 hummie hubs, I heard a similar sound, which was I lost my wheel and I’m ridding on a metal hub now (totally ridable btw, happened at over 25 mph multiple times with out any trouble). So I jumped off almost immediately, since I was only going maybe 10 mph at the time. I realized quickly that I had all four wheels on and that the cells where in fact venting like crazy. So I pulled my phone out and started shooting some video and taking photos while I waited about 30 minutes for the fire department to arrived and finally put it out. In the mean time, one cell after another goes into thermal runaway, catches fire, and spreads to the next cell. At one point, a cell or two exploded, shooting one off like a rocket.

In the end now, about 3k was lost, motors seem to still be ok, though still not tested.

What I’ve learned in the process:

So which is actually safer? The Answer: They are both very dangerous.

I have built 2 boards with li-ion packs and 6 more with lipos, and my 2nd li-ion pack is the first one that caught fire. Granted, the failure was on my part, and a properly assembled li-ion pack is safer than a lipo any day of the week. But this is a DIY forum, where many new builders ARE building their own li-ion packs from the cells bought in these group buys. So if factoring in the likely hood of an assembly error or oversight, is li-ion actually safer than lipo for DIYers who are assembling the packs themselves? Well… I’m running lipos again, haha.

The moral of the story: Make sure you know very well what you are doing if assembling a li-ion pack and if not, make sure to buy one from someone who does (preferably with cell level fuses, which might have save me in this case). If not, lipos are easier if you have good soldering skills, but make sure you use a bms!

So if Li-ion’s are properly assembled, there’s an extremely low chance of fire (assuming you use the cells properly). With lipos, there’s an unknown chance of manufacturing faults that cause cells to blow up, but assembly error causing fire is much lower.

Again, which is safer? Li-ion in theory. In the DIY world though, where we try experimental shit, neither is safe. This could have been my house, my university, my work, ect…

Without further a due, the after math: 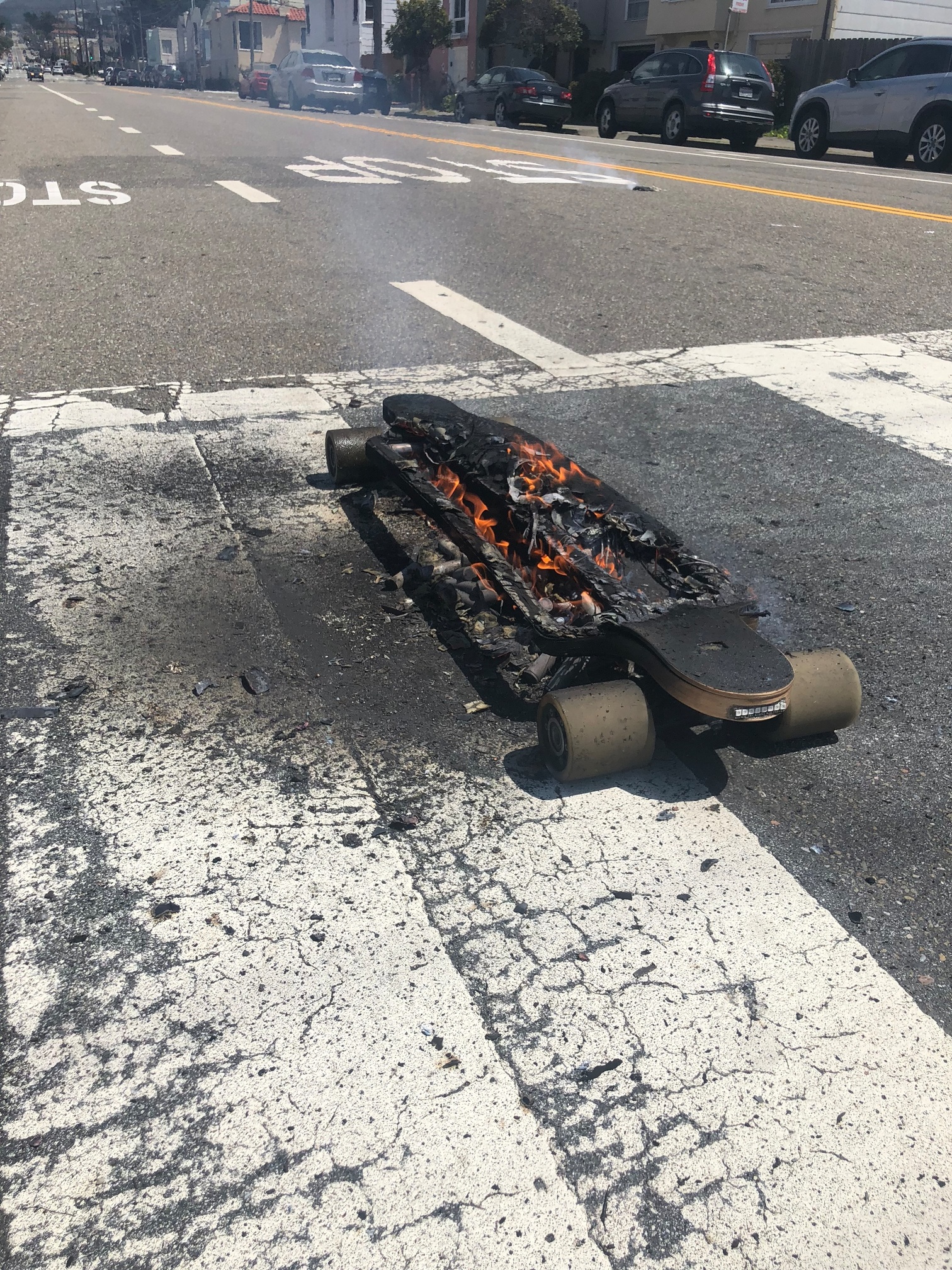 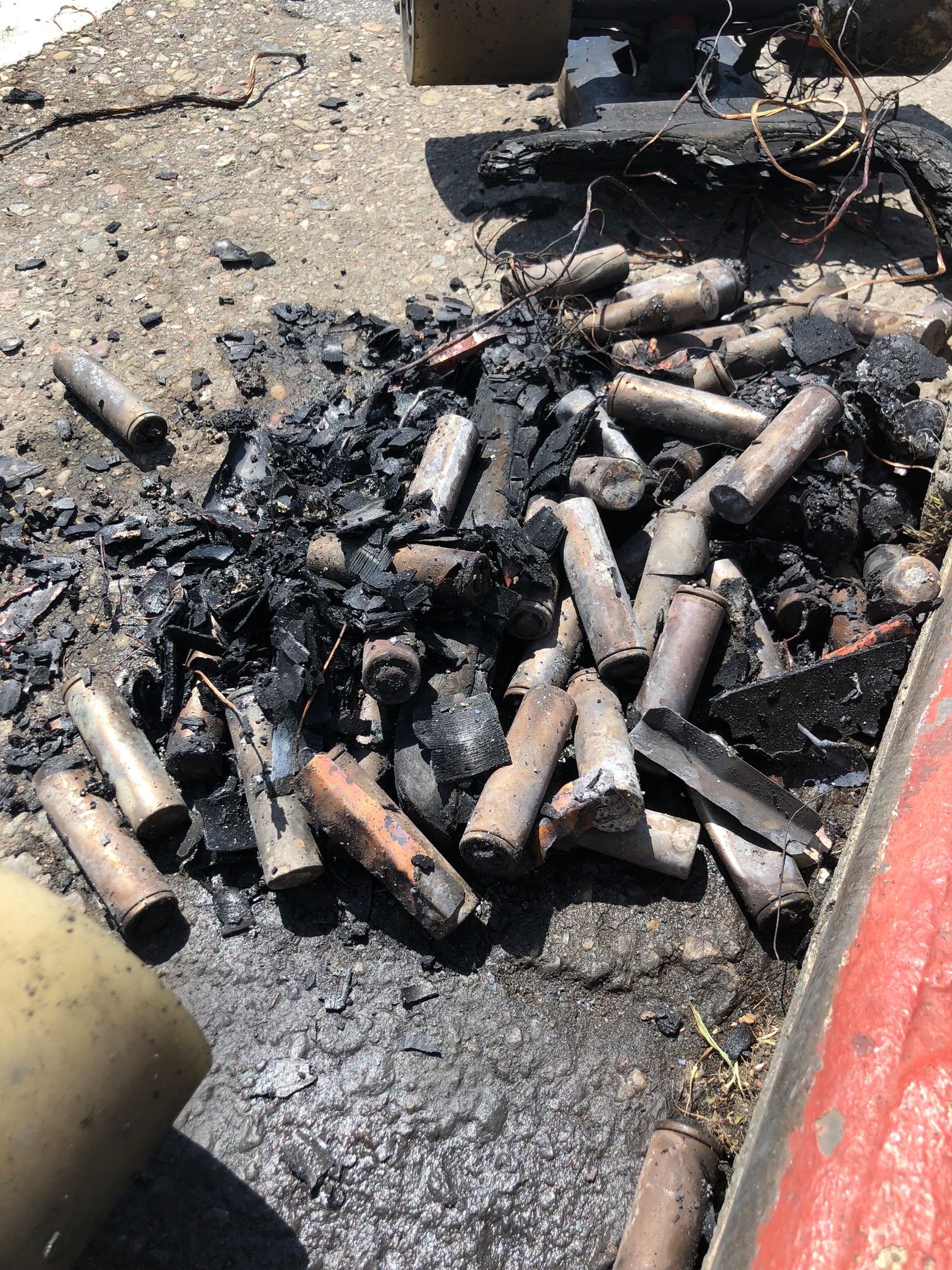 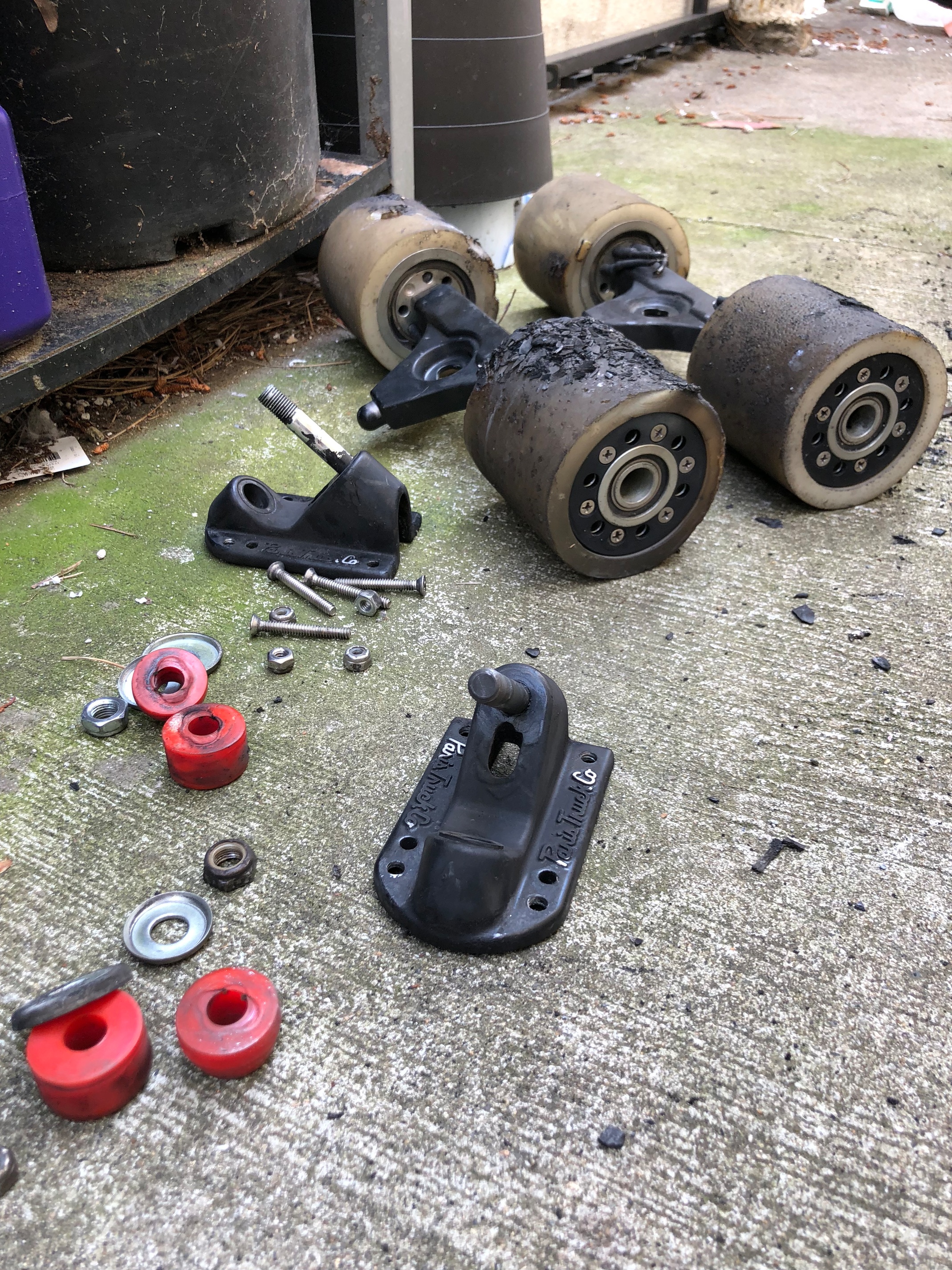 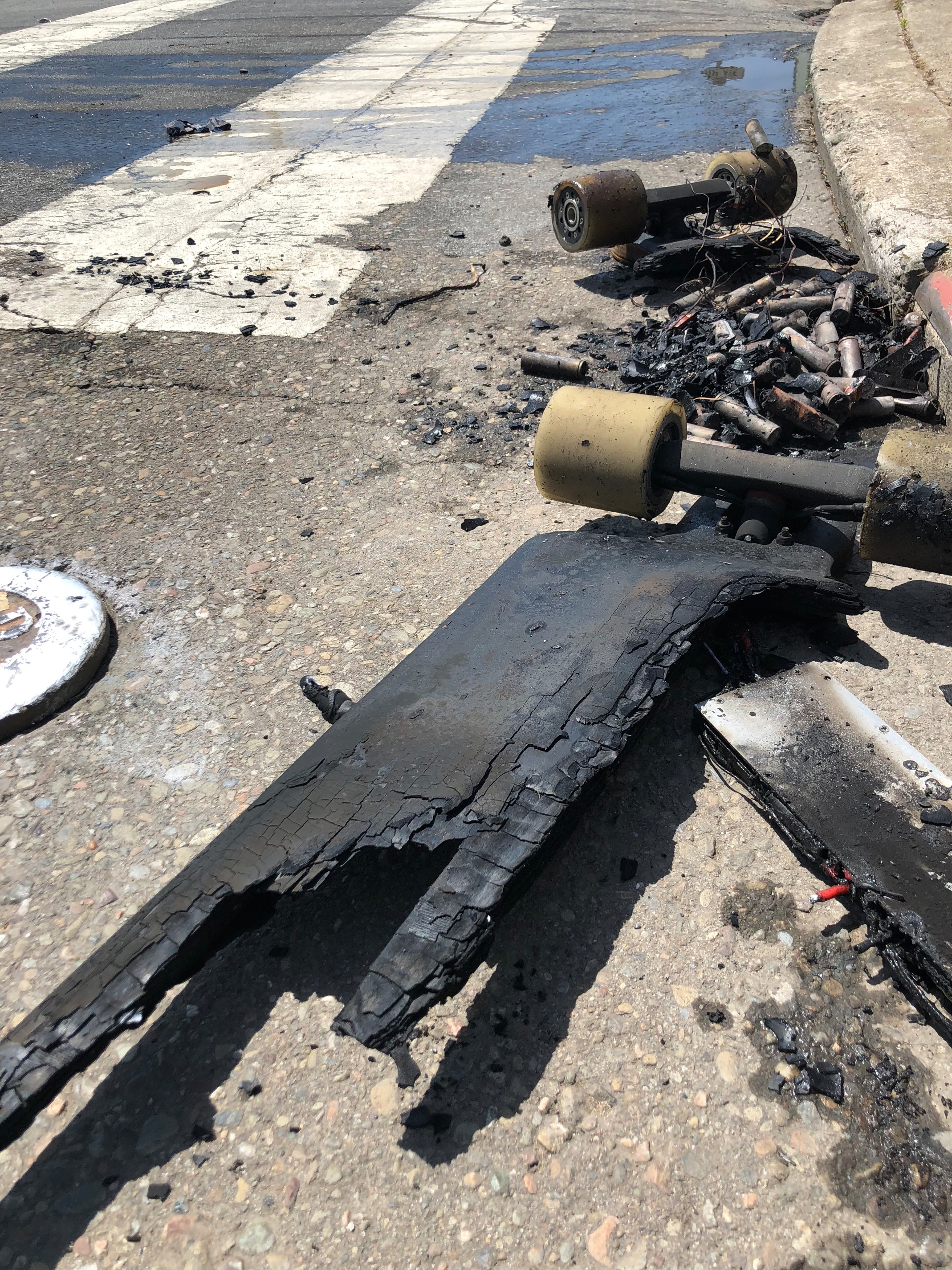 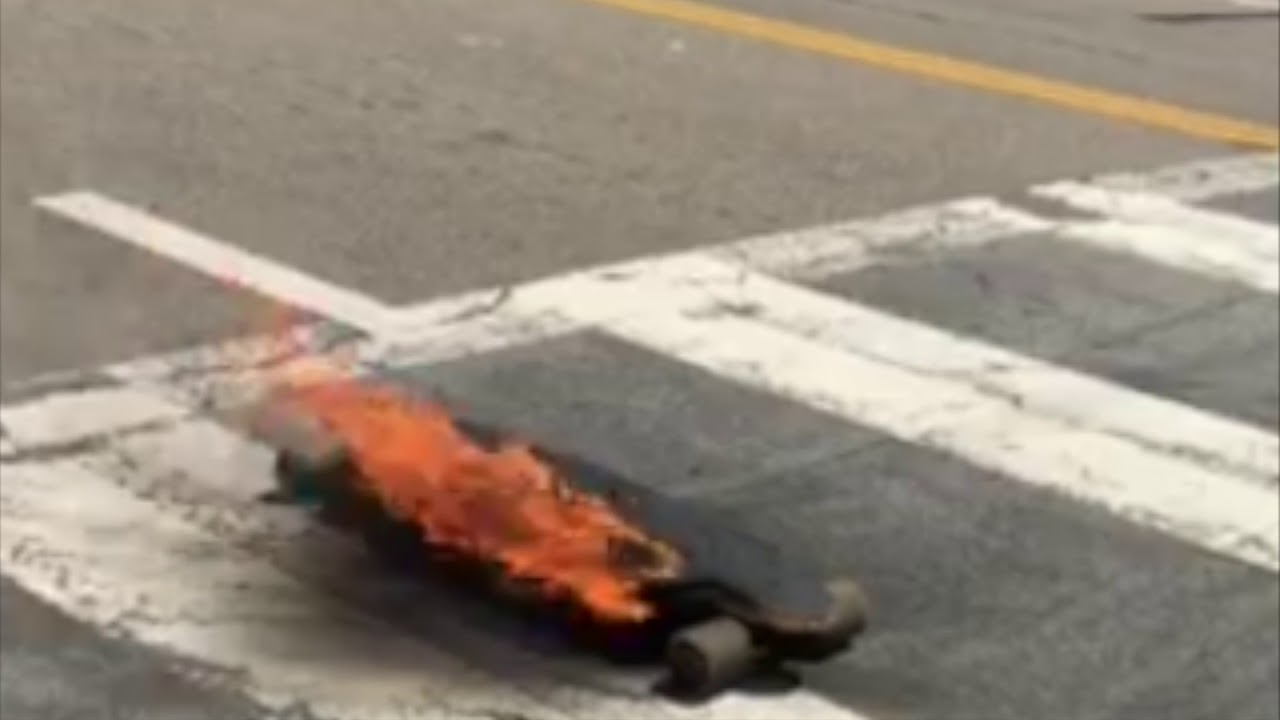 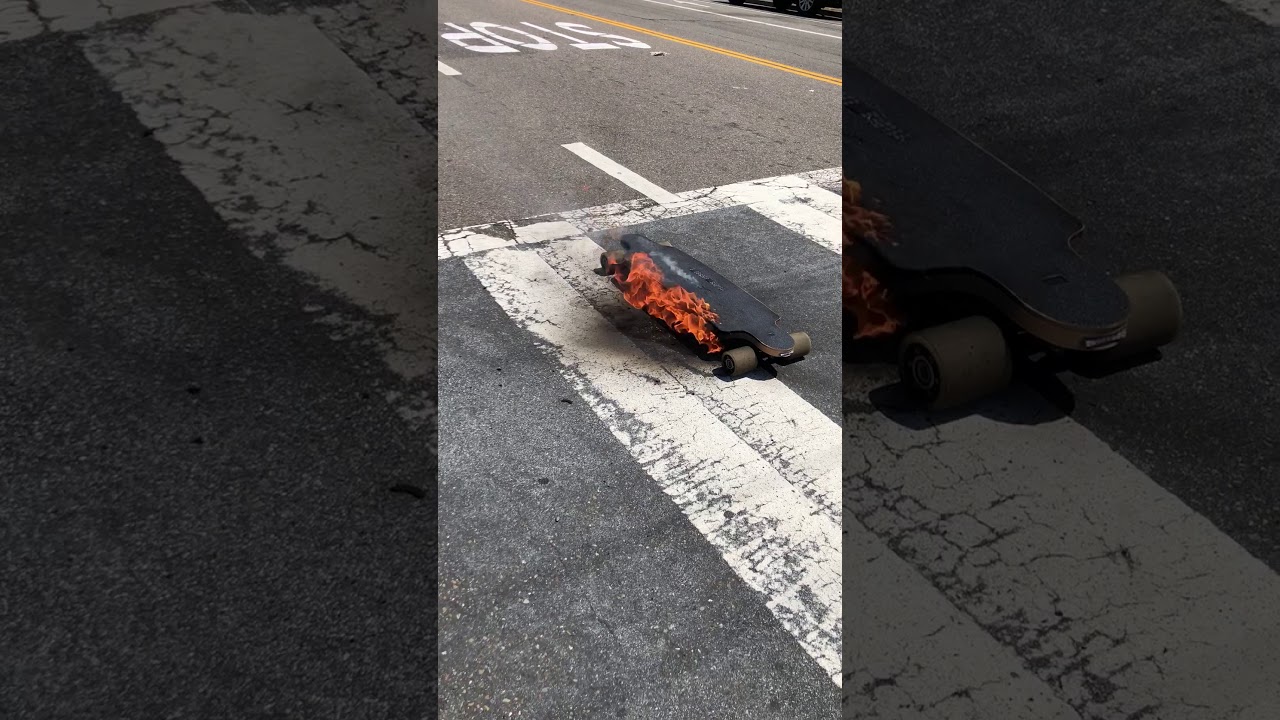 you save the motor tho lol.

generally speaking electrical tapes are being miss used in many area. they are suppose to be temporary patch or aid with something permanent, like a rubber coating or casing. so is the kapton tape.

What type of rubber coating would you use on a battery?

It hurts to see such a board on fire

Thnx for sharing it to other people so everybody know how dangerous it is.

I hope you will recover good from that lost

plasti dip for wires, but for battery like that actual rubber pad or fishpaper or card stock is needed.

Is there a difference between kapton tape and fish paper? I thought they were the same.

I have yet to see a viable solution for a flexi-pack (not mountain board, because that makes it a bit easier) that deals with the heat of 80 or 100 amp discharge con. This was my attempt and failure.

kapton tape is for protecting components from heat. also a good insulator because it is a thin plastic. when heated they shrink and loose adhesion to the surface. which can cause short in battery. fishpaper is thicker and denser that physically difficult for copper to penetrate. some good fishpaper has mica or wax coat that things get slide off. Also the fiber(can’t recall name) doesn’t burn well they sort of become dust. and you can look into Terraskin. it’s a stone paper so it resistant to heat and doesn’t burn and also water proof.

Sorry for your loss…

This is my biggest fear, that my battery would burst in to flames in my apartment… My battery from eskating 10s4p has been solid for 6 months, lets hope it stays that way. 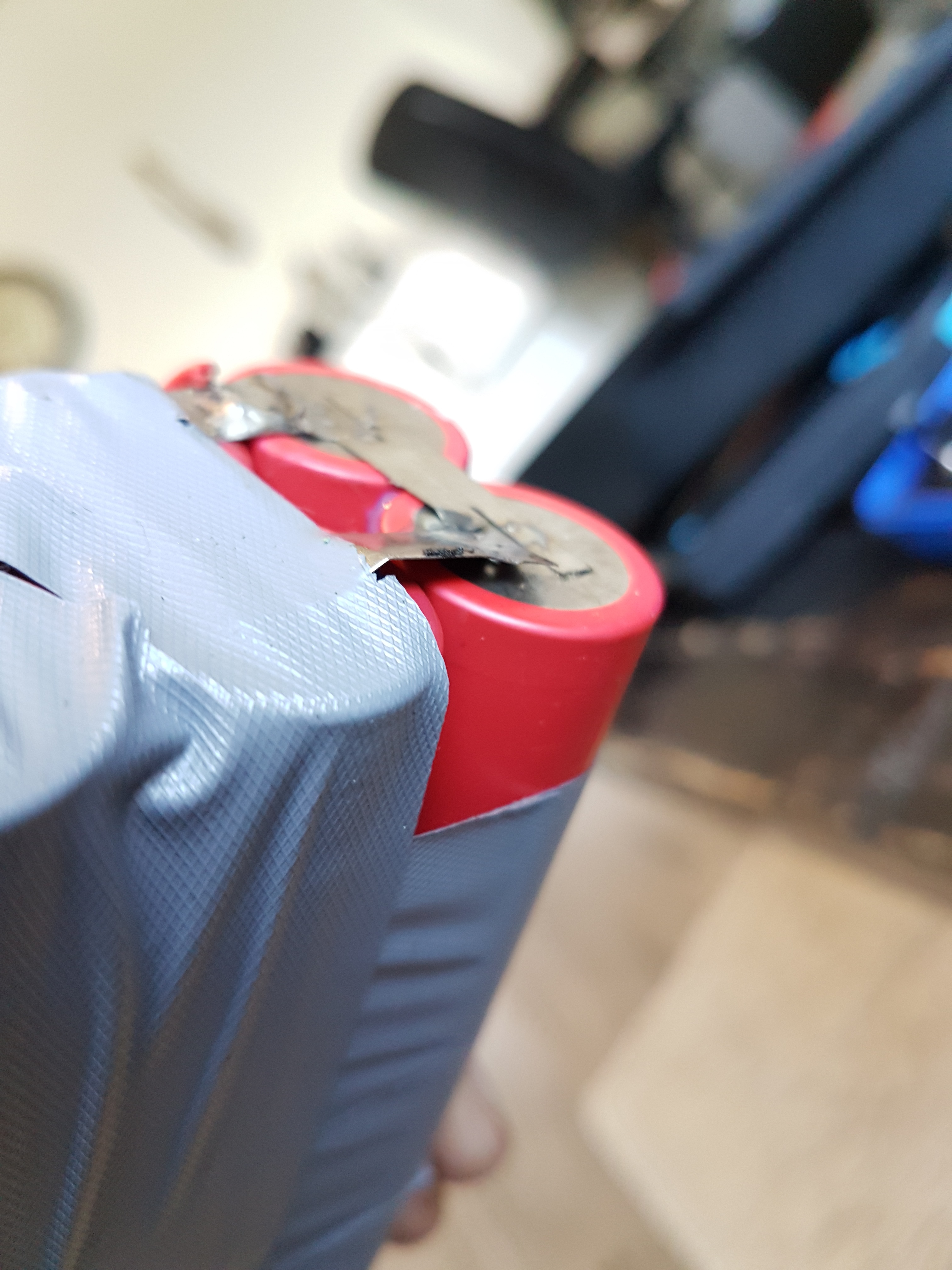 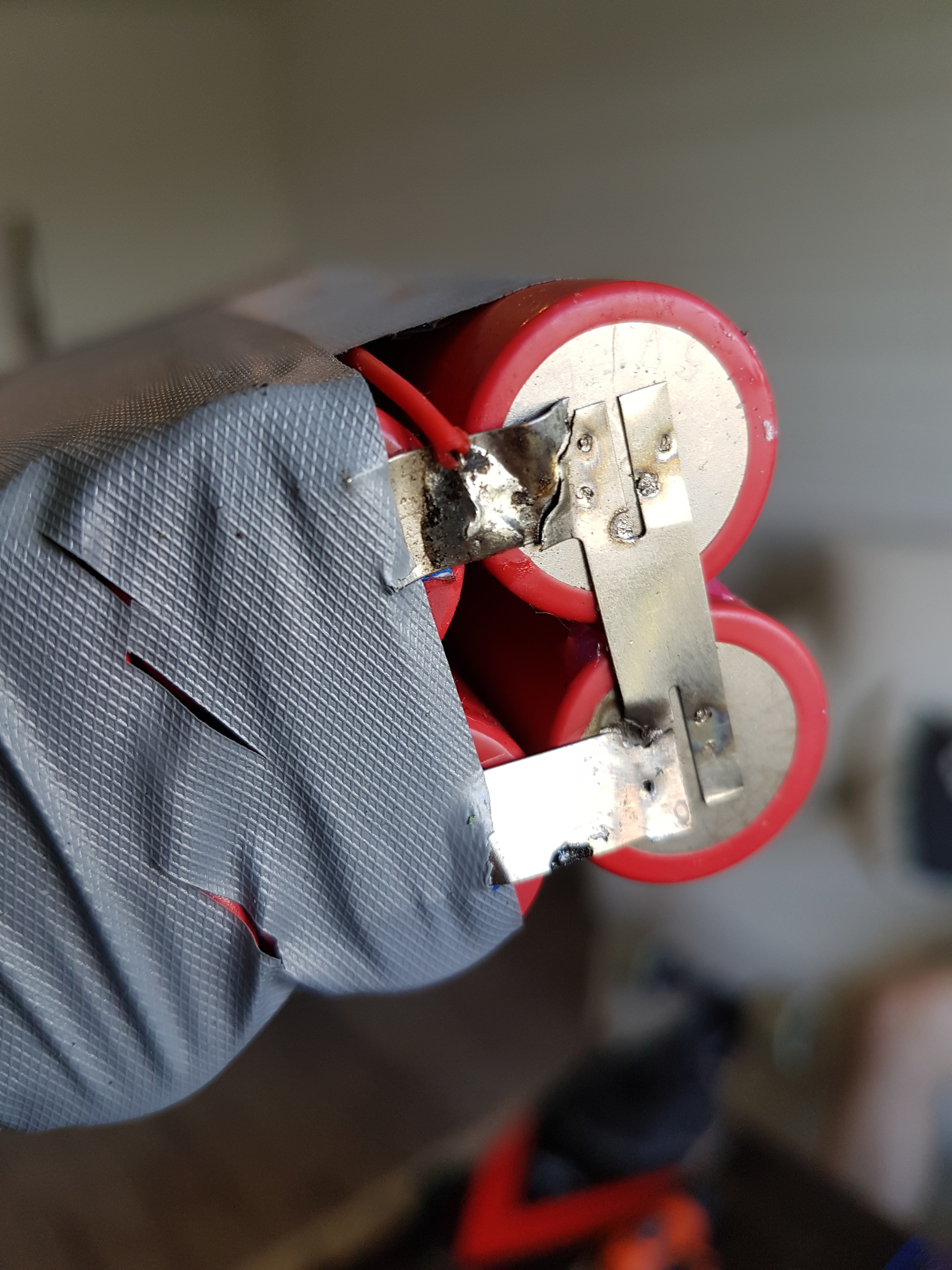 oh thats rough dude. best of luck to whatever build you work on next!

Sorry for your loss m8y. I’m re-doing my battery setup so it’s in modular 3d printed boxes for the Lipo’s to go in, perhaps i could also house them in lipo-safe material, would only add perhaps an extra 6mm to the height, and my AT build has the ground clearance anyway…

there is inherent dangers to using these energy dense batteries regardless of how much precaution you use. we have to assume these risks and it’s your responsibility to mitigate failures as best as you can.

i mean, tesla cars, on very rare occasions, are still catching fire and they know a lot more about building batteries than we do combined. this full electric supercar caught fire and burned to nothing when it was crashed.

as a general rule, we should be inspecting our batteries on regular intervals to ensure they’re running optimally.

but despite all that, it may still blow up and it’s a reality we all have to live with.

Man it really makes me nauseous seeing this. I tried to be careful and diligent but there is a lot of room for error. Thats why I tried to post a lot of pictures in my build thread to get more eyes on. I live in a loft. Whew. Makes me nervous. Glad it wasn’t in your home. Sorry for the loss. I would cry.

Wow man, sorry for your loss. I hope the motors still work. But thanks for posting this to show that li-ions can be dangerous too.

Wow that is quite a story thanks for sharing & sorry you lost your pride and joy, hubs salvageable?

They seem to be. Took them apart and they look good. Soldered new leads on them but never got around to testing them. Just so much going on in my life right now.

I’m considering a small electrical extinguisher quick release mounted to the deck, it’s an extra kg but this just shows you. You never know

electric supercar caught fire and burned to nothing when it was crashed.

Must not make conspiracy theories about top gear, trying to make electric cars look bad coz they sponsored by Shell (Petrolosos)