Shortly wnat to make clear that i have a single board with 2 lipos 10S 4Ah 25C in parallel. So 10S2P 8Ah 25C = 200 amps. And they don’t sag as much. And i have the 12S8P battery made from laptop cells which sag much more because they are absolutely not build for that, but still do it. But the 25R are build for it and the 0.4 V sag is normal and not an issue.

Otherwise it would mean that they rate it to 20A but tell the costumer that they should not do that.

The 0.4 V sag is normal, but that doesn’t mean it isn’t an overall issue with the board. With sags like that, you have to stop at 3.6 volts per cell without load, as any more, and you’ll sag down under load past the 3.2 the community agrees we should stop at for the sake of the cells life span. In this case, the 10s battery is 32 min volts, 42 max volts. That’s a 10 volt range, with a sag of 4 volts, so 6 volts of usable energy. That’s almost half of the battery range in sag, which means you’ll get half of the range you would get with no sag. With a sag of 2 volts instead, you would still have a range of 8 volts, 1/3 larger than with the 4 volt sag. This means running at half the suggested rating would yield 1/3 better range.

Getting 25 miles on a battery this size is a stretch for any hub motor in my mind. If you are loosing 1/3 of the battery to sagging, than this is an issue. I never said the batteries are malfunctioning and not doing what they are designed to do, just that these cells in this configuration will either sag heavily, and under deliver on power. Or a medium of the two with still quite a large sag. There won’t be 80 amps of power without a large sag, which no one wants due to the range issues it will exacerbate.

And if his hub motors can handle 30 amps continuous than I’d be pretty impressed, and it would therefor be the most powerful direct drive system.

I think your getting confused by motor amps vs battery amps. The two go hand in hand, but motor amps are always higher than battery amps. 30 motor amps is not that high. I hit 50 motor amps peak with 30 continuous per hub with hummies small hubs in 4WD. This is usually around 18 battery amps. I’m sure I could pull more, but like the Raptor 2, I’m limited by my batteries max amps. I am sure I can pull much higher amps once I solve my battery issue.

That is so much mixed up miscommunication here. Simple example, at 3.6V with no load a lipo is already empty.

Started to explain it but then you will come with the next stuff where numbers get mixed and taken out of context.

I know you don’t like the raptor 2 and you don’t have to, which is absolutely fine. Hopefully we will see in the future if it is a great board or not. Time will tell.

I will concentrate on source code again.

I’m trying to get to the bottom of the facts, not create bs to attack a board. I want the board to do what it claims, so the sake of everyone whose blown their money on it. Otherwise, I would keep my mouth shut and wait until it comes out and the problems are there. I’ve talked to many respected people in this community about this issue in private and they all agree with me and what I’m saying about this batteries problems. You seem to be a programmer, I am also. But I’ve spent the last 18 months studying electric skateboards, and the electronics in them. My ideas aren’t crazy, but we clearly disagree that using this battery, you will either have bad voltage sag or low amp limit, or a mix of the 2.

Yeah I probably am… Could you explain their relationship cause I seem to keep getting hung up on this.

This is how I understand it right now, let say you had a 10S pack. On the battery side of the VESC voltage is a constant 37V and amps fluctuate depending on how much power is needed. On the motor side, voltage is determined by rpm of the motor (rpm/kV) and amps are equal to the power being drawn from the battery divided by the voltage in the motor. The motors amps would always be higher since the motor can never actually reach top no-load rpm. Is this correct?

I can tell you the battery amp are always lower than motor amps from experience of looking at the graphs of the two together with app.

By the duty cycle you know at how much volts the motor is currently working and that also predicts the ratio of motor ams to battery amps.

Ahhhhh, and throttle is directly tied to duty cycle?

Of course it is not that easy. There are different control modes. Most are using current control. That calculates how much volts need to be powered to the motor to reach the exact amount of amps that you control with your throttle. So when your motor max is set to 80 amps then at 25% throttle you tell the vesc to reach 20 amps. Doesn’t mater at which speed. You always want 20 amps when you don’t change the throttle. So the VESC constantly adjusts the voltage to the motor to match 20 amps.

This is the power output then 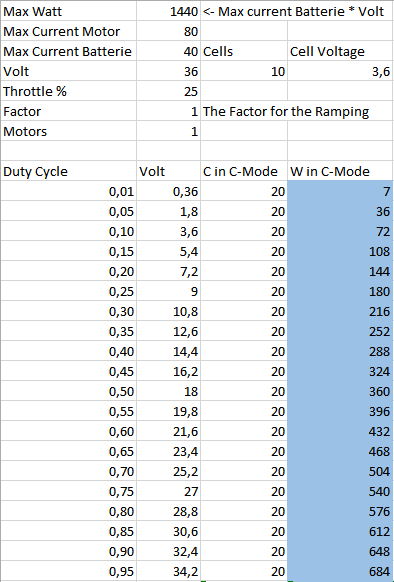 But now we do the same thing for 100% throttle. 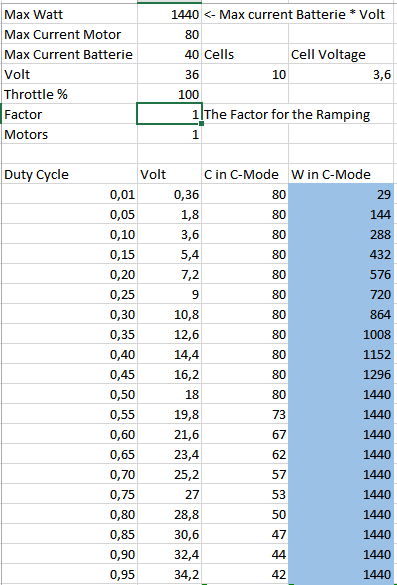 Here we can see that the battery max amp setting of 40 A reduces the maximum power output already at half the speed. Which is the reason why i invented my firmware mod.

On the other side we also start to draw all the allowed battery amp at half the speed. Before we don’t even reach that value. And the closer max motor and max battery amps are together the faster you have to go before you start to draw the maximum.

Please try and make a video of that. I tried to keep it simply instead of complicating thinks.

I’m just wandering why noboby use the Duty cycle in there equations???

This is a good thread @evoheyax I see your points

Because it is hard to explain. Lets say the motor runs at half the speed on the bench and there is no wind, rolling or bearing resistance. The it would be 18V on the motor because it is at 50 % duty cycle. when you want to go faster then you have to give it more volts. Lets say 27V (75% duty cycle). Then it accelerates hard until it reaches 75% of the speed. If you would reduce the voltage then it brakes and charges the battery by that because it has too much volts and wants to go back unil it reaches the speed at 20V. When add some resistance now like wind and rolling resistance then it can’t stay at it’s speed. So it slows down a bit but you still power it with 20V. So it will go down a bit until the voltage difference is enough to produce enough power to keep the speed with resistance. So it stays at 50% duty cycle but can’t keep half the speed (maybe only 40% of the speed).

The maximum speed is then predicted by the maximum duty cycle which is 95% for the VESC. So we only can reach a speed that produces enough power at close to 95% of the battery’s volts.

I hope that this simplified it enough. Maybe i am even wrong because you can complicate that drastically and that is the way i explain it to me. All of that can be calculated with the resistance of the motor and so on but don’t even ask me. I am not a electric engineer, so i will be the wrong person to explain that.

I know about duty cycle…

I just that people need to realize that the battery only need to provide a true rms current of what the motor need base mostly on the duty cycle… for a exemple if look at the last video from vedder, he run is motor at 70 amp (yes the ermp is low), but only need the supply to provide 7A since the duty cycle is at 10%, so before arguing that the battery need to be bigger, you need to take a closer look upon the esc and the motor you are using.

As you say at lower speeds the amps to the motor will be much higher than from the battery (for fractions of a second) but it’s not worth confusing the issue. a wattmeter or amp meter is telling the actual amperage running from the battery and when you quickly get to the peak of the duty cycle the amps to the motor are the same as from the battery and pulling 40 amps or 45 or more straight from the battery is common in my experience as well as others. The 2 motors and esc may even be able to do that continuously with no decrease in performance but the battery voltage will drop like a rock and with it speed, power, amp hours, and the packs life on a 10s4p Li-ion pack with 20p rated cells. It’s typical and normal and not the end of the world but it is the limitation of the power that can be put out and a big limit. By my simple math assuming even a 40amp max (the limit of the fuse and suggested for batteries) the peak power the board will have, which will last seconds before sinking with voltage sag= 1520 watts.

OK i have enough. Have fun guys.

My mistake, somehow I wa under the impression that the board came with a 40 amp fuse. That would of course limit power a lot. I haven’t heard there isn’t a fuse but judging from the most recent post by onloop it seems the board will be able to put out 80 amps. He doesn’t factor in sag with his Mac power number, which goes back to the earlier Li-ion issue but whatever a world of difference from a 40p fuse