Thanks for the info, how fast has shipping been for replacement parts for you?

To Germany usually one week or less. But the Raptor sadly parked some time in the customs.

Ive taken my Raptor on many different paving conditions. The mounts have some minor scratches. Motor has some very minor scratches as well. As @onloop has said previously you need to go up kerbs on an angle, but really you dont want to go down stepped concrete paving say 30mm or more. You would slow down for these or stop. I always thought the motors should hang from back, but assume due to the kick tail it would more likely get hit at the back. So I think the position of the motors is good. Also makes it less obvious you have motors there. Everyone is surprised when I tell them theres 2 motors under the back wheels.

Another thing, if you are comparing to the boosted you used to have…

The wheels on the raptor I found out are much bigger than the 75 mm wheels on the boosted, so there is actually more clearance compared to how much the boosted had. My boosted’s motor mounts got totally scratched up just after a couple of rides. So that higher clearance is a plus for the raptor. On the flipside, if you do get any damage by rocks or anything like that, it is going to go to the motor directly since the motor doesn’t have an enclosure.

Hmm, makes sense. I was just concerned about having to be super mindful of the surfaces I go up. I was thinking it would affect the number of things I could go over, but if the main thing is going down from a taller spot then I guess I should be able to manage. I change from street to sidewalk a lot but always use the handicap decline.

Yeah, I’m just worried about getting one hit and it being inoperable at that point and having to get a replacement. I guess I won’t have to be on the sidewalk often anyway since I’ll be going so fast : p

Motors should be easy to replace, but you would need a heat gun to melt the hotglue at the junction where cables go into enclosure. Ill try and post some pics of my motor and mounts so you can see condition. The things arent going to say scratchless for long. Theyre alot less susceptible then boosted. Ive seen them on various vids and one myself as @Photorph says.

Put many miles on the raptor in Los Angeles. So far my biggest concern is the odd extra large lip on driveways or handi ramp…I usually hop off or take them at an angle. Going down is a different story due to the kick tail…riding off curbs isn’t an issue, but still something I usually avoid. I do worry about the occasional sand patch I can’t avoid while riding beach paths, but so far it hasn’t been an issue.

In keeping with the thread topic: went on a epic 9 mile night ride with my buddy who has the mono raptor. It was my first long ride with another eboarder and man was it a blast! Hauling ass through alleys and along the beach paths at night, popping off curbs, hammering the throttle on some open stretches…felt like a teenager sneaking out after curfew…truly epic.

@onloop can be polarizing for various comments and views, but the man built one hell of a board! I will forever be grateful to him for the introduction to eboarding.

My thread keeps getting highjacked. So glad your eating those paths with your Raptor. It does make you feel like a teenager again. Also good to go with another skater.

You definitely have to look out for sand drifts as it will stop your board in its tracks and you will come off second best at speed. But LA beach paths would be so cool. Sounds the best.

Dude can you make a movie ? I’d love to see someone blasting with RAPTOR in L.A.

Yes please do make a movie. My hunger for Raptor footage is big, whilst waiting for mine to arrive

As soon as I get my raptor, I’ll put a lot of footage up of me riding and a review.

Exactly what I was thinking, but too hesitant to ask. The day I posted my short vid my computer failed so lost all my editing programs that Id been setting up.

@Photorph I know your wait is excruciatingly long. At least your board should have all the small niggles resolved and you will just be left bombing up hills. You will not be disappointed and hope you post a small post in here of how good it is. Cant wait for your vid review. Where your boosted left you wanting more top speed, the Raptor will keep going. Hope yourve ordered an extra battery or the fast charger so you can go even longer.

Haha sorry buddy, I’ve been following every Raptor related thread on here for a couple of weeks and wanted to get as much info as possible. If my estimation is correct, Jason’s behind on like ~4 months of orders right? Really hoping once the wheels and VESCs come in he starts churning them out like butter. I ordered last week so my wait may last until the end of summer…may be getting another board in addiition so I’m not boardless the whole summer.

I’ll be making a lot of instructional videos when I get my Raptor as I’m sure there’s a shit ton of things to be learned about fine-tuning the experience.

What I’m really waiting for is a video showing the dual+ and raptor dual drag racing – yes, it’d be pointless, but it’d bring in peeps in droves. Jason teased showing the mono wipe the floor with it, but he needs to settle it, the vid would go viral (within the boosted community).

V2 Boosted seems to be coming soon so we’ll see how it compares, I have a feeling it will be something we never expected…or extremely underwhelming (in comparison to the raptor). 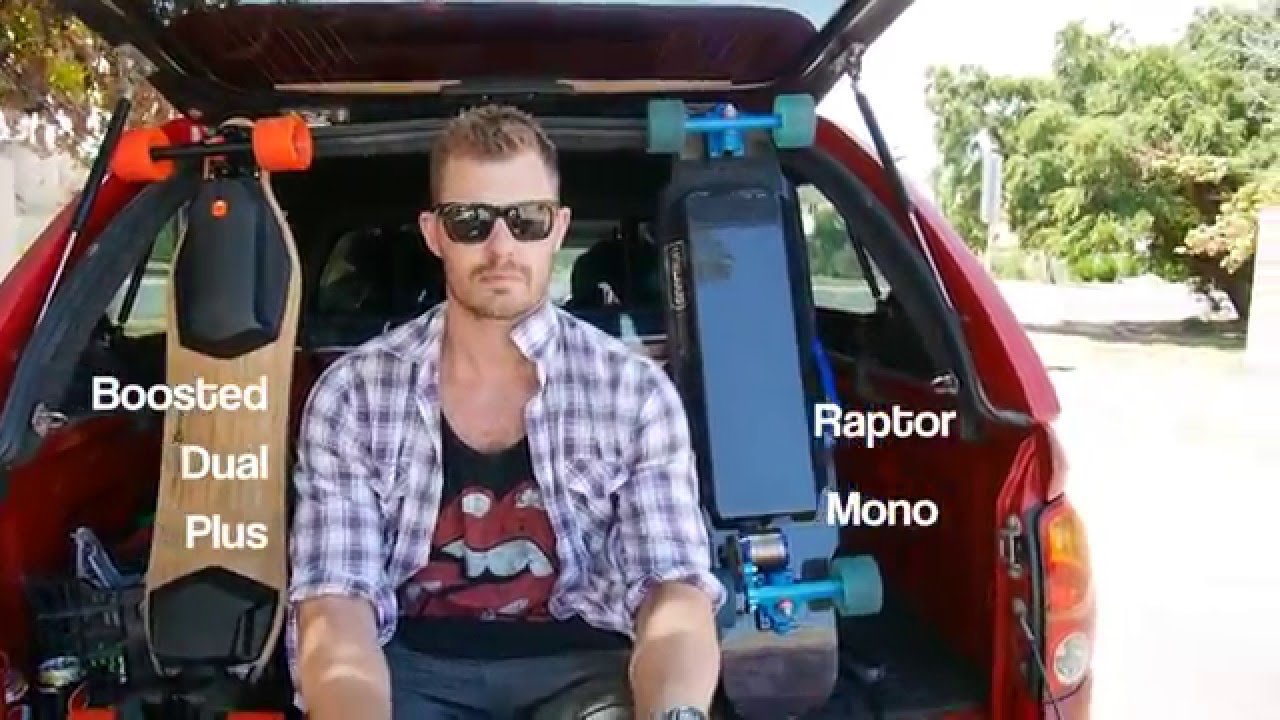 That’s the mono bro, I wanted to see the dual against it

Yeah I know… A dual raptor comparo would be pointless