Do any of you guys bother re-balancing your cells every now and then? I just took cell readings and I’ve got some at 4.22v and one at 4.1v, so I’m thinking of doing a re-balance as shown in THIS video. Thoughts?

I balance every charge… with my balance charger… 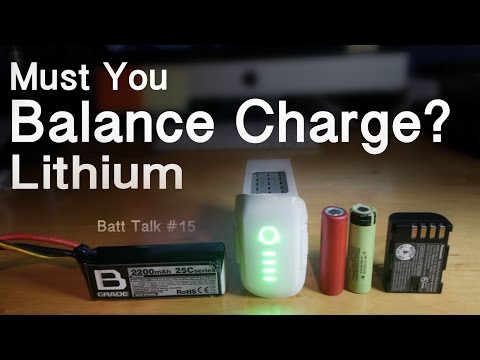 I use a BMS with a 10S LiPo, but I seem to recall reading on here that if the cells aren’t balanced, it may not balance them correctly like a good hobby charger would.

I seem to recall reading on here that if the cells aren’t balanced, it may not balance them correctly

what is the point of a balance charger/bms if not to balance your cells?

hmm I overcharged a 3s battery pack and when I balance charge it, one of the cell is significantly higher. So I think he has the same problem. I haven’t tried to discharge it since it takes a while so I just leave it for now because I don’t have the time.

I smell a fire in your future if you don’t take proper care of your lipos. Also how did you over charge your Lipo? Almost all charger require you to plug in your balance port so it can make sure you don’t over charge?

How much is “significantly higher”?

I know a lot of people say that not using a balance charger is fine if you’re using good cells etc. but you really should be using some kind of protection circuit when charging li-ion cells and lipos. Good cells eventually become bad cells and you could very easily end up with over discharged and overcharged cells. You don’t want to be taking chances with battery packs with this much energy. But you do you. If you’re disciplined enough to constantly check battery voltages then I guess at that point you become the balance charger.

Exactly…you dont need to burn your house down because you were careless when it came to lipo charging.

Man! All this is scaring me since I’m new to the scene! I just got these batteries and this battery charger. Any advice to make sure I don’t screw something up (and maybe lose a house)!?

Just always balance charge and stay away from parallel charging. Make sure you check your batteries ever so often for cell voltage and IR if your charger does that. Don’t over discharge your batteries. I would say 3.5v cut off is safe. Dont let your lipos sit for long periods of time fully charged. That is more for lipo life then it is starting a fire lol. Most fires occur because people over discharge there batteries and when they go to charge that bad battery especially if you dont use balance charge mode it over charges the bad cells. A hot/puffed battery is garbage. Lipos get hot because you either have bad IR because you didnt take care of you battery or you Lipo is undersized mah/c rating for the current you are trying to draw from it. Dont be afraid just take care of them and you will be fine. I have yet to have a lipo fire but Ive seen them happen because people were lazy or get to relaxed because they have been using lipos for years and never had an accident.

I use this to charge my lipos. I was charging it then I completely forgot about it. I usually set the timer so it reminds me or I’ll just sit there and wait. Balance port just balance the charge, I don’t think it does anything more than that.

Your charger will do up to 6S, so if you’re running (2) 3S batteries in series, you can do it just fine with a balance port adapter like THIS. Make sure you’re in LiPo charge mode and plug in your balance port. The charger will automatically know when to stop charging and will balance your cells during the process.

If you need to charge more cells than that, then you’ll need a different charger, or a BMS.

Also your charger should show you IR according to the manual.

yeah I did that. I will pm you the video when I get home.