Realistic KV's and you

I’ve historically found advertised KV’s to be a bit off from real world values and wanted to start a discussion of everyone’s personal experience. This can hopefully shed light to various motors from various manufacturers and help builders purchase correctly with eRPM in mind.

This was a topic I saw talked about for a bit last year. Although the comment I’m linking is purely anecdotal, I saw some users test the KV themselves as well which resulted in lower kv’s than advertised.

In regards to @chaka’s motors. He kindly shared his methodology of calculating kv from VESC real time data which you can find here. The gist is [Power / Motor Current = Motor Voltage], eRPM / 7 pole pairs / Motor Voltage = KV @ 95% duty cycle. Since the VESC only runs at 95% duty cycle max we finally divide by .95 to get the actual KV of the motor. As you can see from the link, chaka’s calculations were pretty on point lending a result of 197kv for his 200kv motor.

I’ve applied the same math to @JLabs Polar motors (and soon @Kaly’s motors when I get them) and found that his 190kv 6355 motors have a calculated kv of 179kv. A bit lower than advertised, but this makes it easier to apply to higher voltage setups without too much worry of hitting eRPM limits.

If you’re willing to test your motors out, please post your results here so we can gather data about motor KV’s! If I get enough responses, I’ll start a Google Sheet for it. If you’d like to contribute but aren’t sure how to get the values, post a screenshot of your real-time data tab while under full throttle and I’ll do it for you!

I think this is the first time I saw something like this, cutos for something new!

As for the kv, they are specd to +/- 8kv. So theoretically you should receive a 182-198kv motor. In your case it seems like it was a little off.

For future orders I am becoming more strict on the quality of the motors, and this will now be one of many main pints of focus.

@Jinra as a FYI, if you go in the terminal and type “kv” the vesc will give you the kv in erpm (divide number by pole pairs)

Good call! I’ll check it in a bit and compare to my calculations.

One thing you need to do here is to remove the erpm limit on the motor configuration by extending it to ± 100000 ERPM.

This way you will get the real Kv without any limiting from the VESC configuration settings.

also if going the terminal KV command way make sure to press the throttle with one hand while typing the KV command with the other this way you will get the current KV at that particular time. 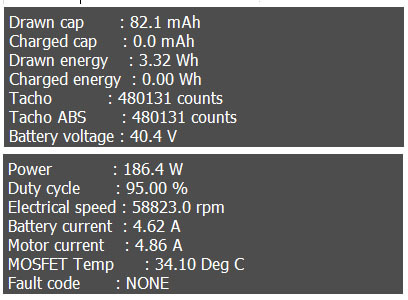 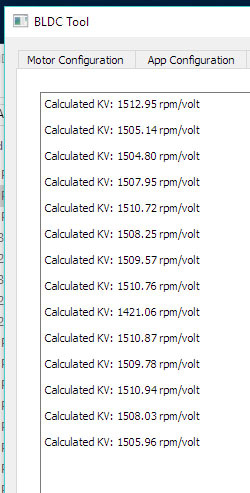 Don’t use the limiter myself

Given my findings with Kaly’s motors I think this is the reason you never have to set an eRPM limit for your 12s 190kv builds @longhairedboy. If your actual kv is lower than advertised, then you’d be gracefully under the eRPM limit even given ideal conditions (50.4v) which means at full charge with zero voltage sag.

Awesome thread @Jinra I’m gonna do the test soon and give you the findings for the APS 6355 190kv HEV motors that I’m using. should the test be done with belts off or on or does it matter?

I do it with no belts or load what-so-ever to get best scenario results.

My methodology includes running the test 10 times using ‘kv’ in terminal as well as manually calculating a couple times to get an average.

That would mean that neither my motors nor the original R-SPEC 6355 190s were actually 190s.

Which wouldn’t surprise me in the least. My guess is they just come up with a wind count and wire guage that would get them close, apply that count when they wind it, and then bin it as a 190.

The interesting bit is when using 80% efficiency they do deliver what the esk8 calculator says they do provided you’re in my weight class. So even if they are, for example, 185 or something, they still act like a 190.

mh nice that someone brought this out a bit more…

I remember same thing (kv being lower) was said about torqueboards motors a while ago, so im glad to see some other motors being tested…

Cool to see, they are actually lower in values, both better for power and for erpm limit, I assume

i remember that to. Seems like they gave him a really hard time about it.

Very interesting. Thanks for posting your results. Did you measure that through the VESC tool? I’ve got a pair of Torqueboards 190kv (2 slightly different can styles) and a pair of 230kv (your old ones) 6355’s that in interested in testing. I’ve heard it rumoured that the older 230kv motors were actually closer to 190kv.

the easiest way is to use the terminal command. Type KV and send it several times to get an avg reading of erpm per volt then divide that by 7 to get the motor KV value. I was able to do this using a bluetooth module and Metr app. I ran this test with belts and wheels on. Then I pulled the belts off and retested and got a slightly higher value. Did I do something wrong? The trend seems to be lower KV than advertised. Try this. Type KV in terminal and send while holding throttle. The vesc will report erpm per volt. Divide by 7 and you will have your motors true KV

Sorry mistake in my original post. you should multiply by .95 instead of divide which gives you 77.2 pretty close!

Apparently it’s too old for me to edit

EDIT: wait i was correct the first time divide by .95