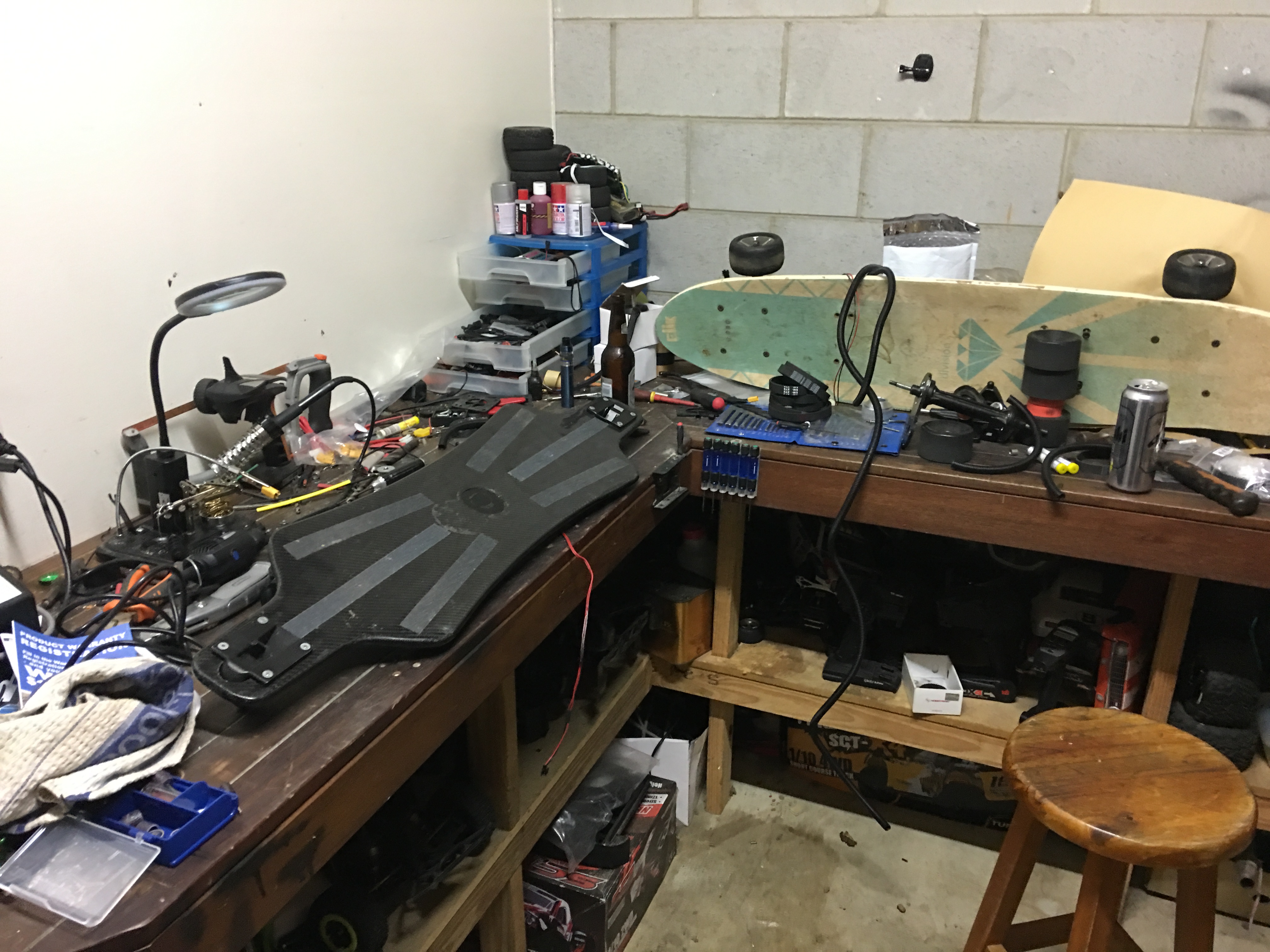 Thats not a mess… Ps its even worse now.

Still trying to figure out what all this data means.

This board flies. Like… Scary. What have I done? What am I doing? As I was falling I think I had a come to Jesus moment and I’m not even religious. 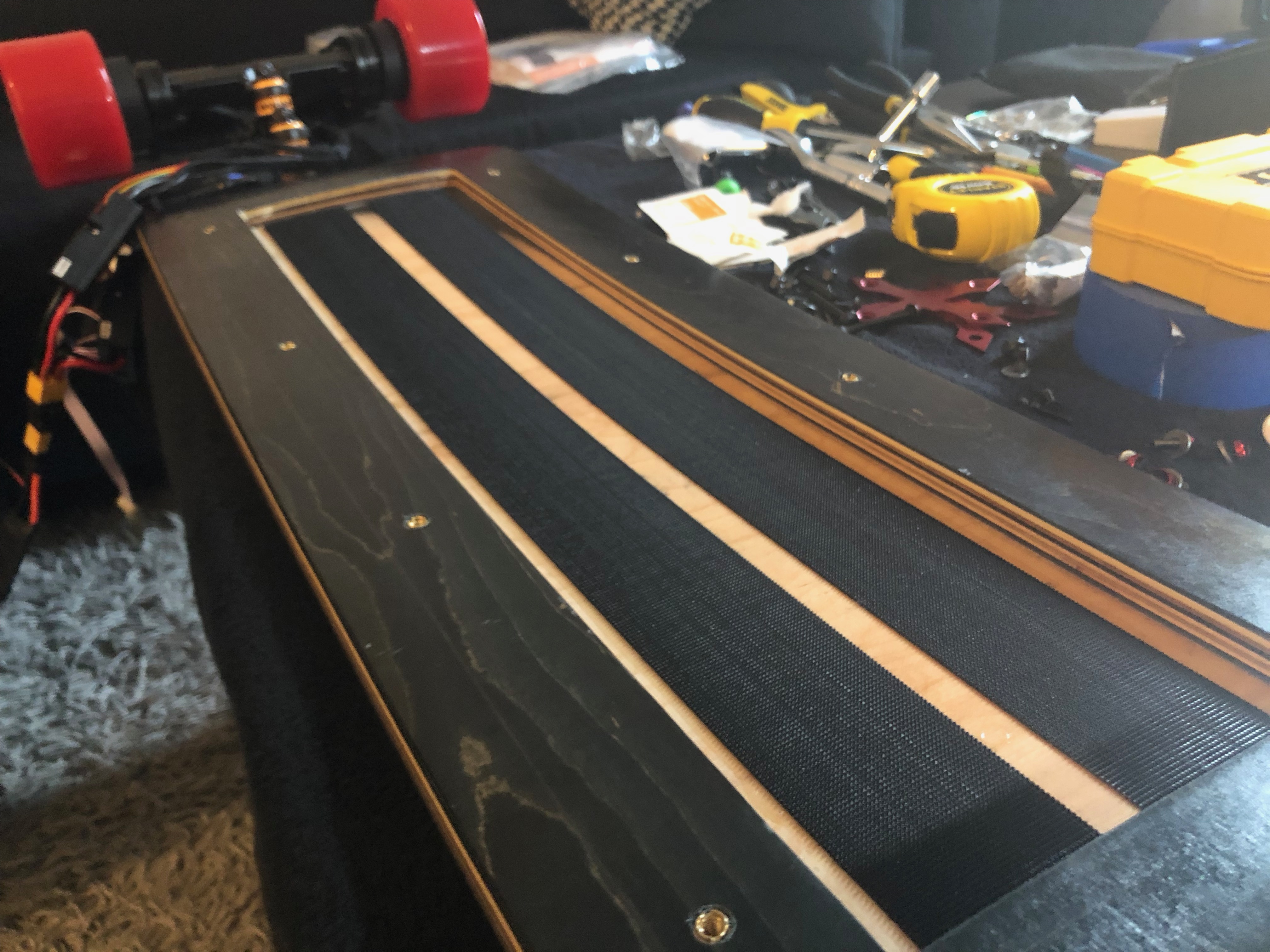 ^Velcro came in. Stuck the coarse side and lined up most of the bottom of the deck. 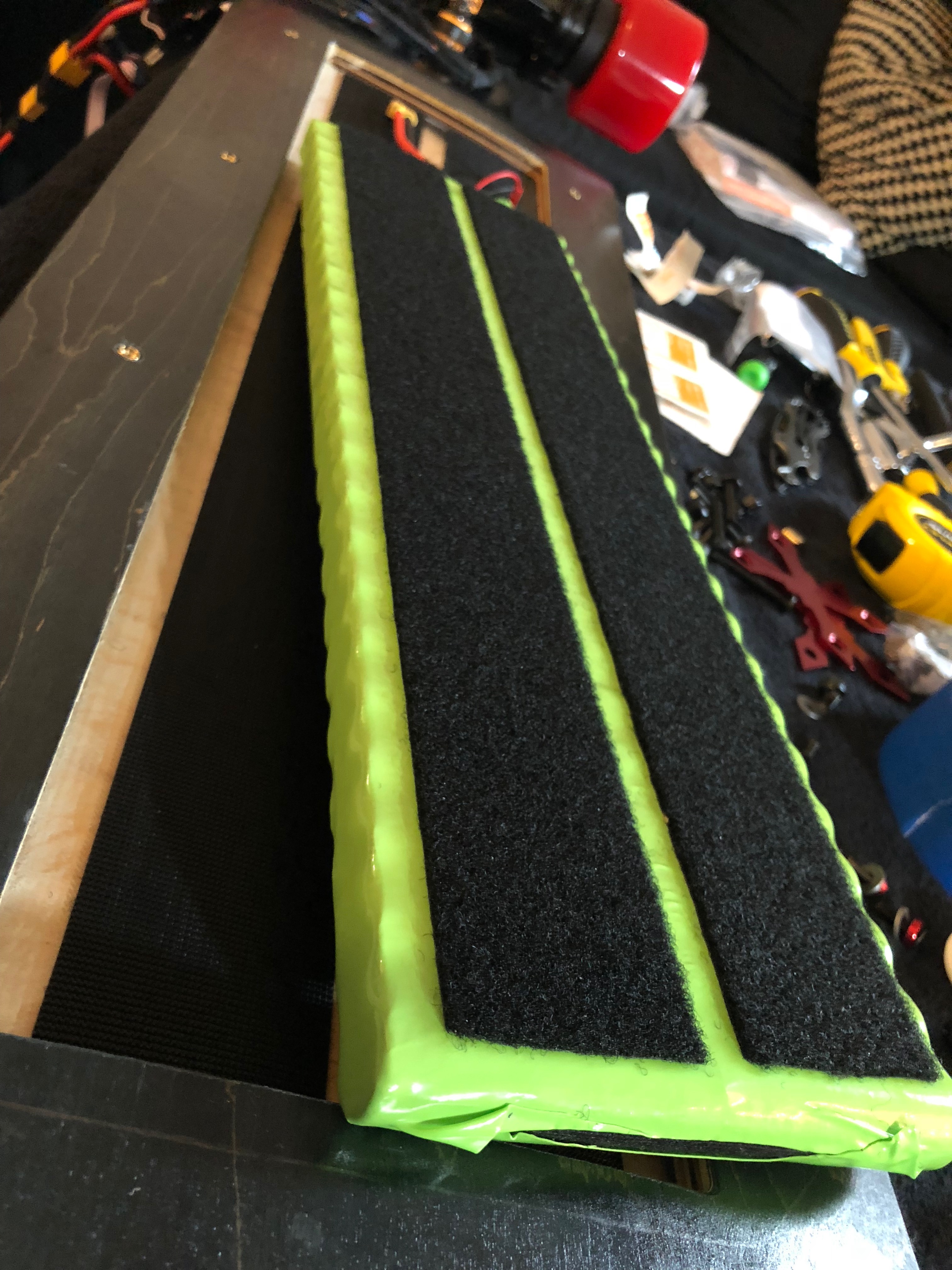 ^Lots of velcro at the bottom of the battery. This sticks quite well. 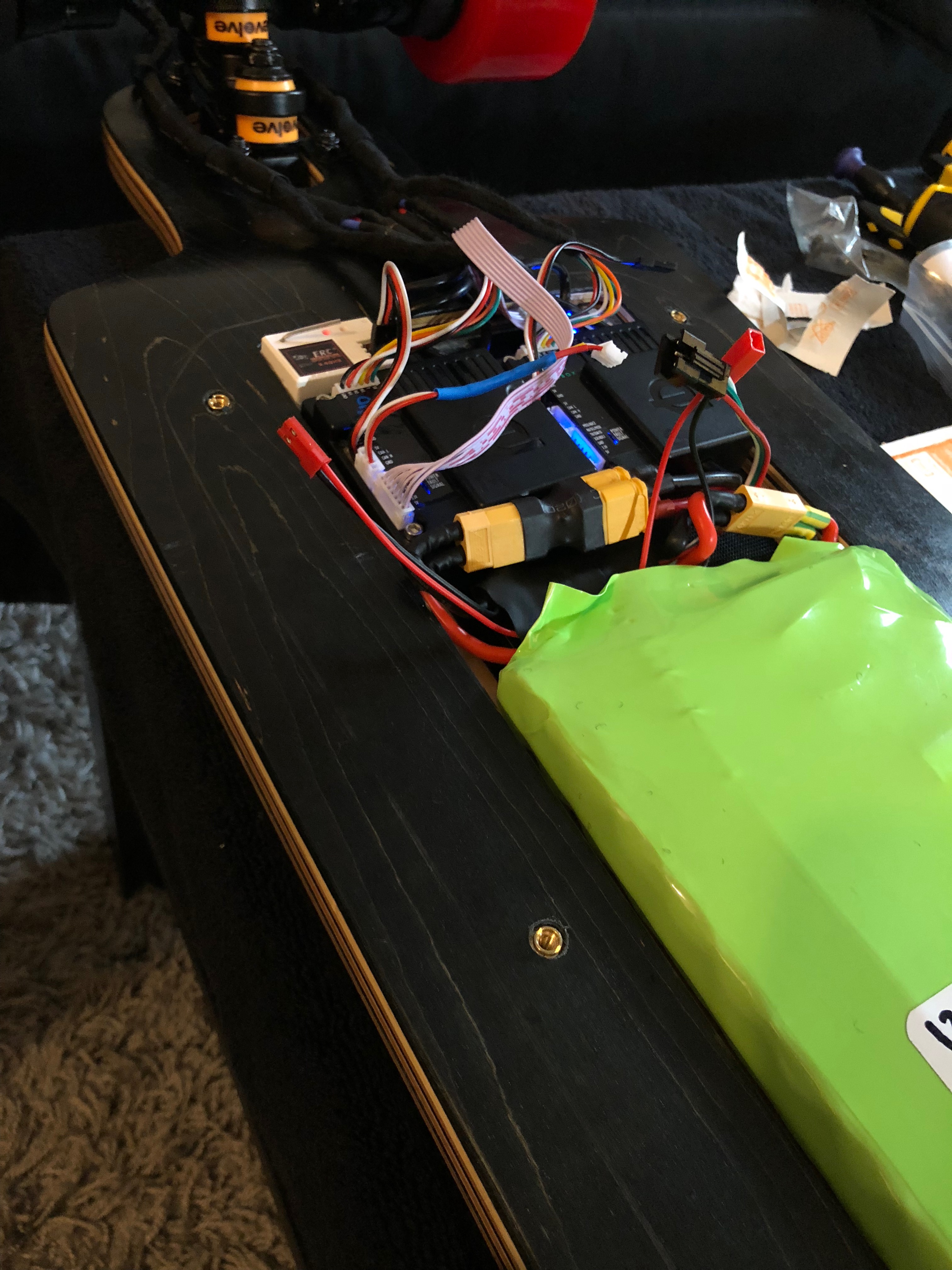 ^Items fit. Not as pretty as I’d like, but it work. Will add some foam on top as well as a foam gasket to weatherproof this. Will also hot glue the components after I’m done with major testing and tinkering. 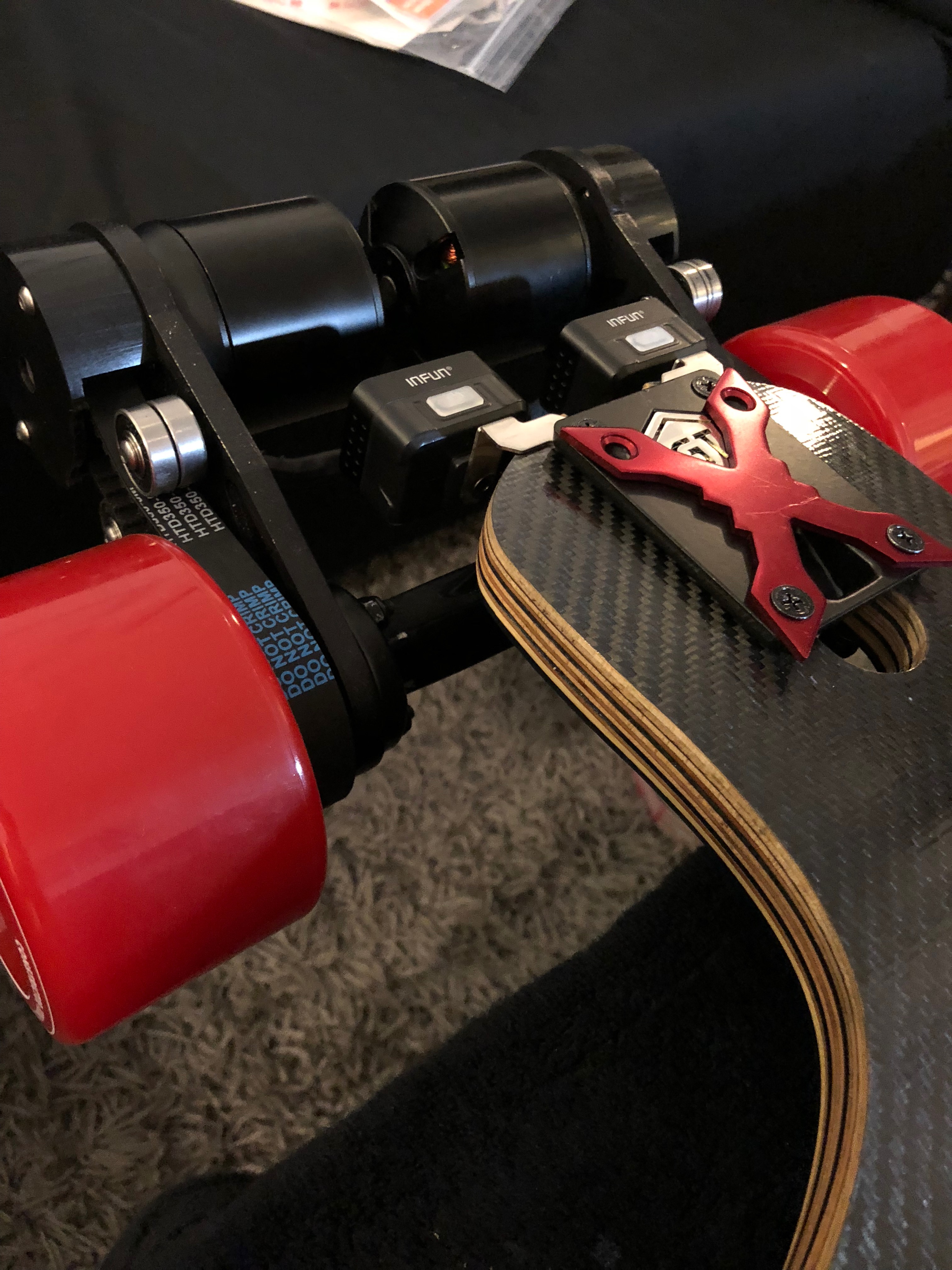 ^Nice ass. Added some nice square tail lights with built in accelerometers that turn solid red when I slow down or brake. Rechargeable via USB. Used some old Koowheel light brackets I had laying around, hopefully they don’t break as they’re cheap metal. 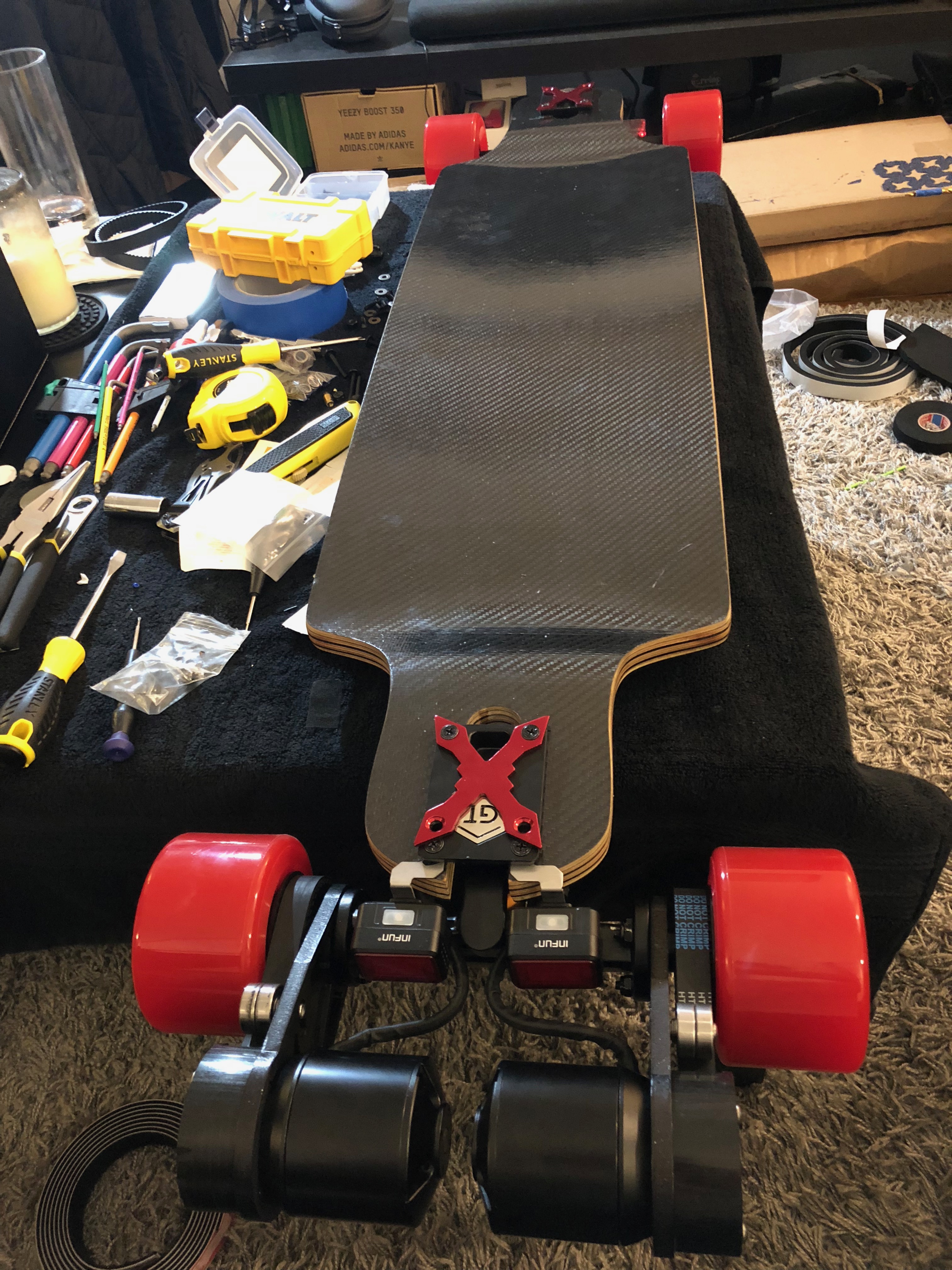 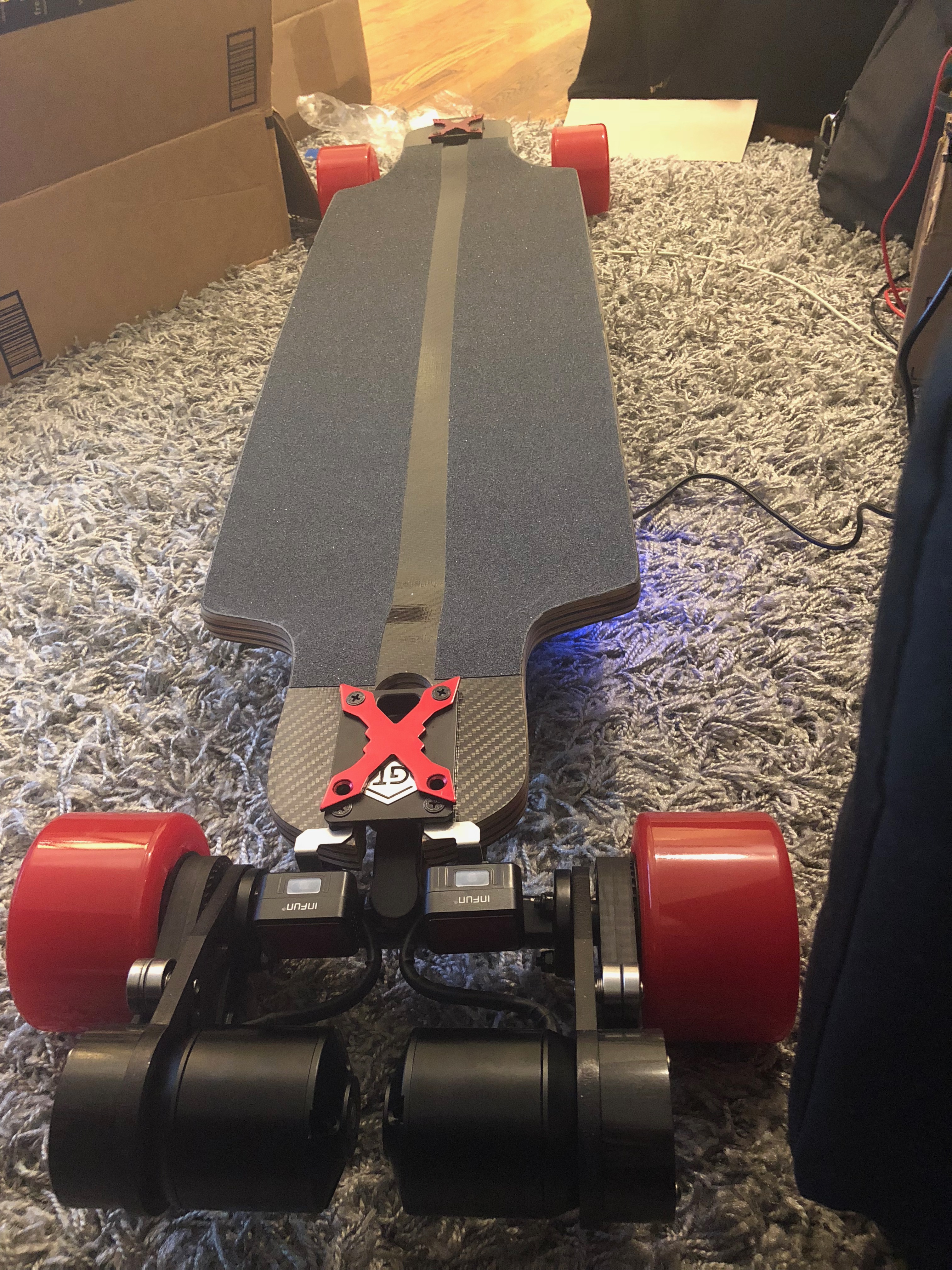 ^the “nearly” finished look, gonna trim down the grip a bit. 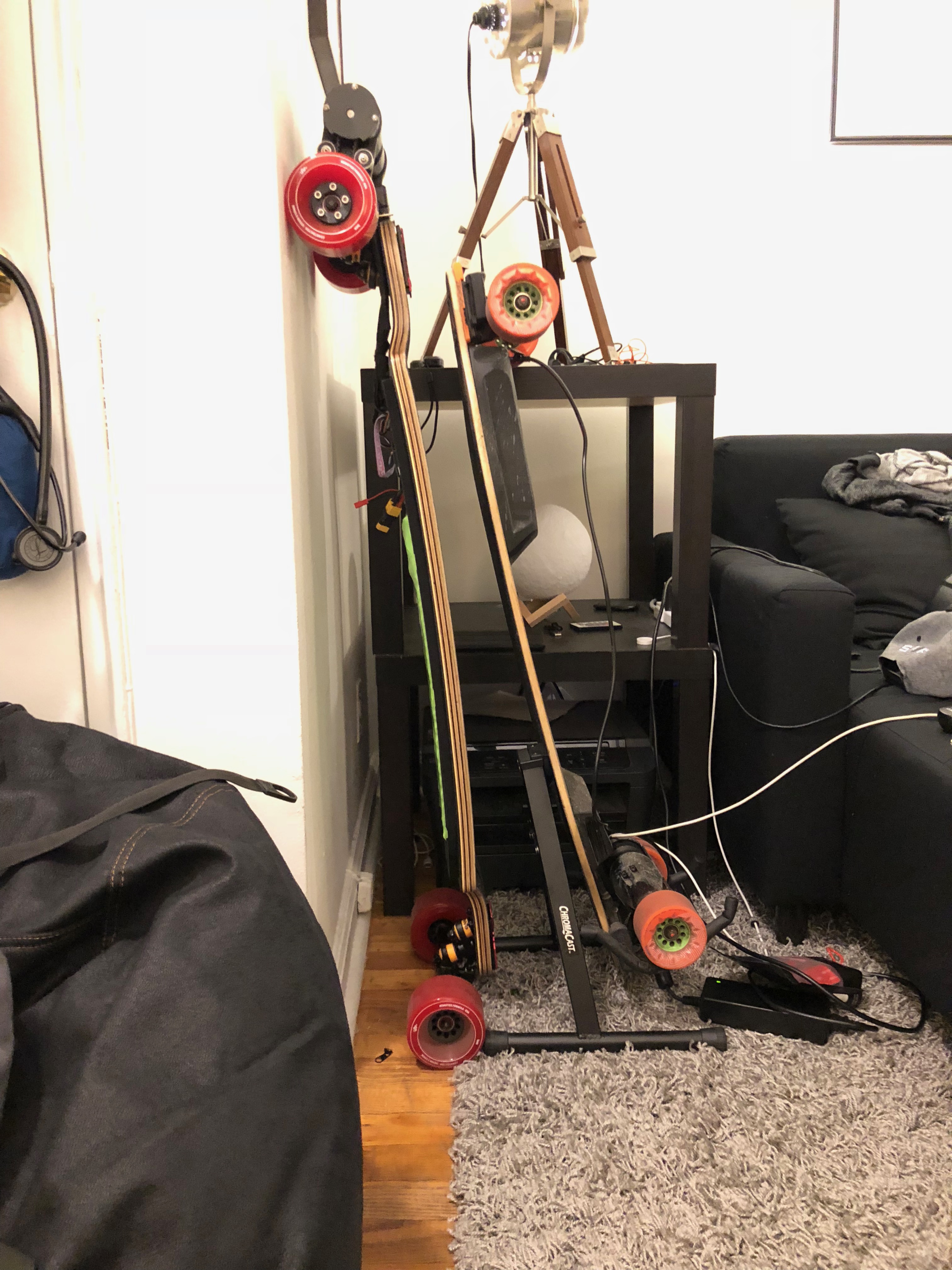 ^Size comparison to my Boosted V2 Dual+. This board is massive. I don’t think this will be my daily driver. 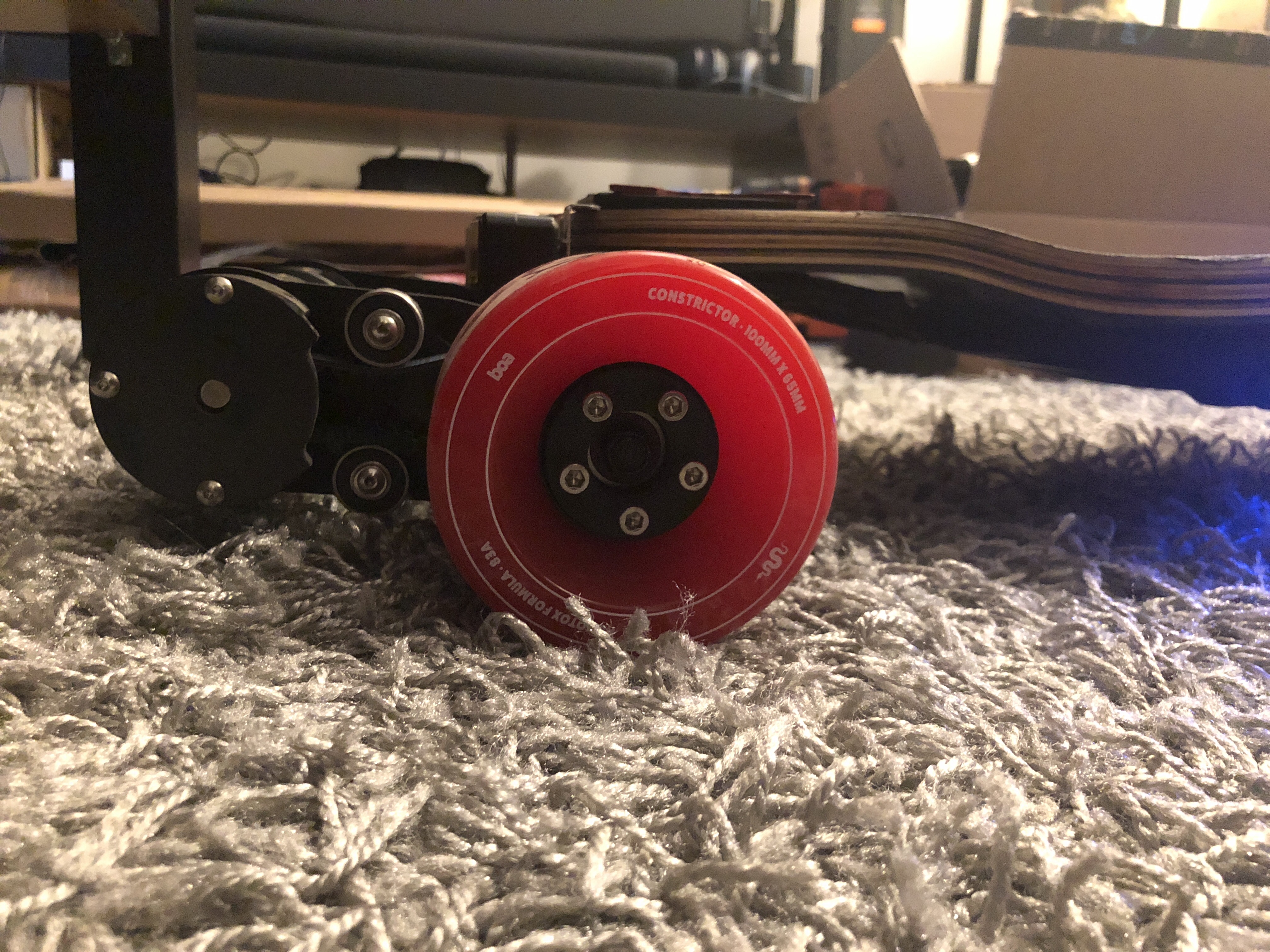 ^ Motor mounts “Sagging” down after a ride. Disappointing. They were torqued very well. I did, however, use the stock evolve mounting screws that came with the trucks, so I’ll try to change them to the ones sent by Janux and test again later. Also debating removing one side of the idlers since it increases resistance. Should I remove the top or bottom? 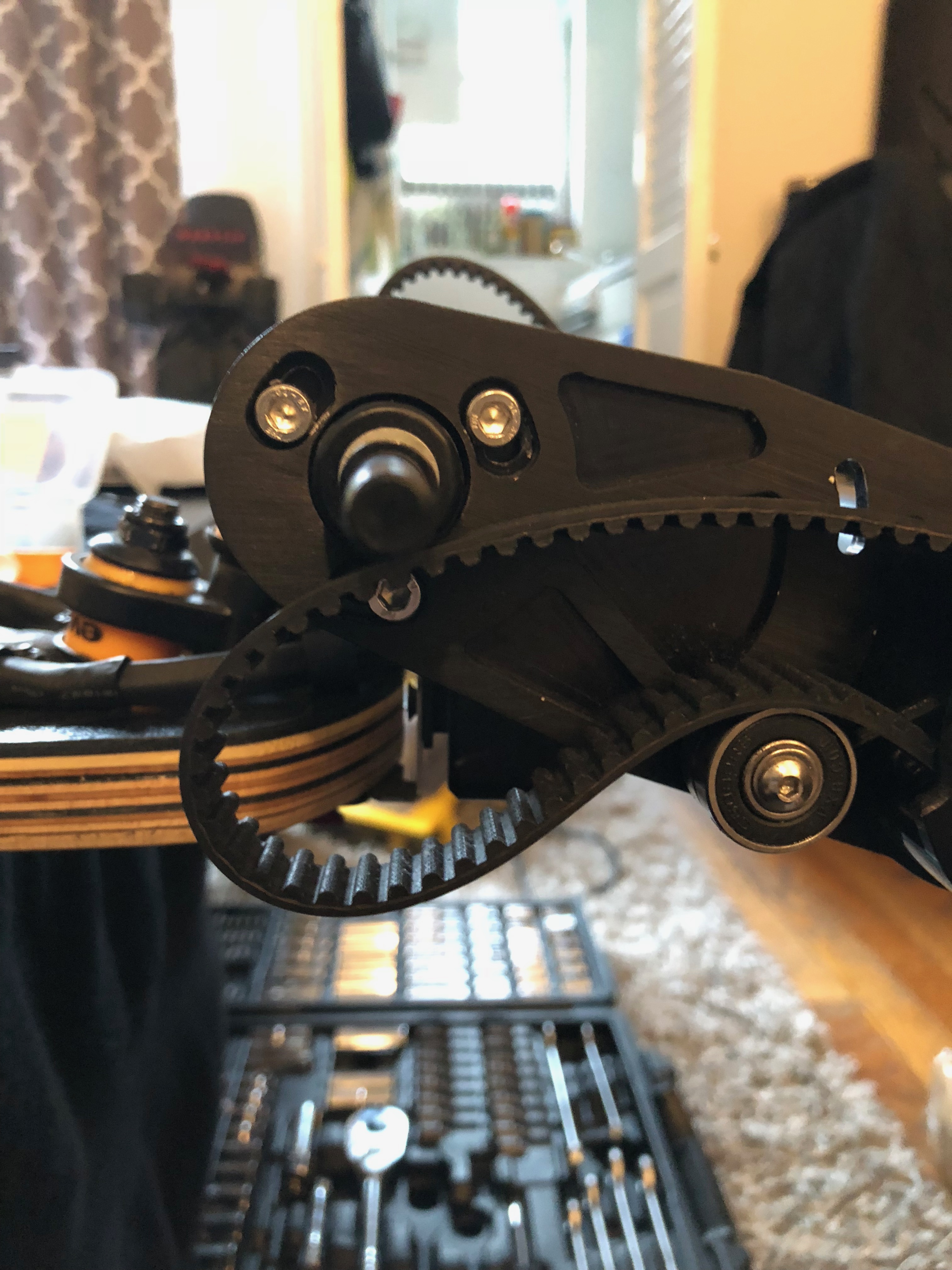 ^Changed out the bolts on the Janux Evolve Mounts to the ones included in the kit (not the stock evolve screws). Hopefully this solves the problem where the mounts sag down after a ride. 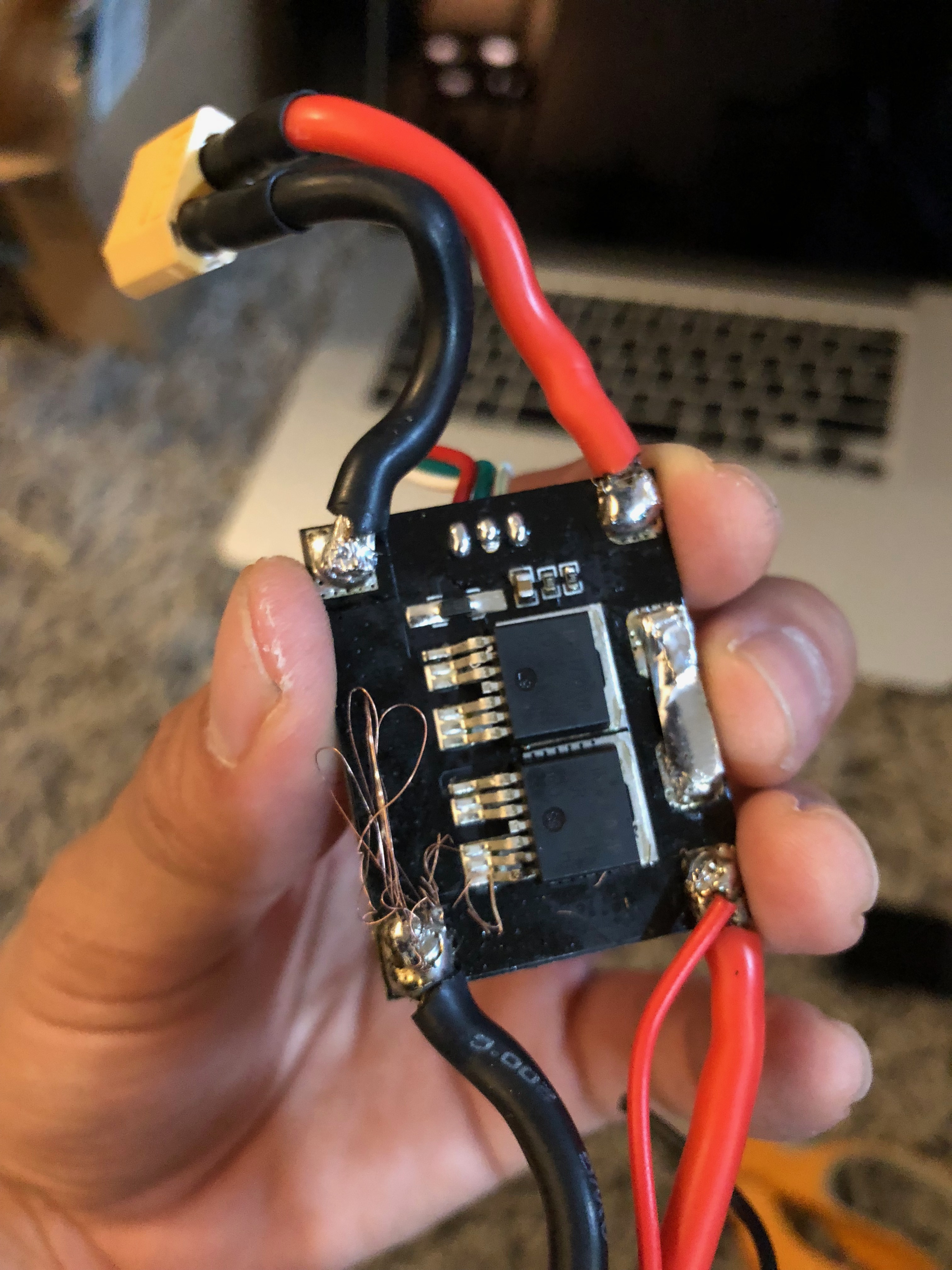 ^Antispark blew. Here’s how it looked when I took it out, lol. Looks like it shorted. Circuit remains on but can’t use the switch to turn it off. Oh well. Buying another one locally this week, but I have to open up the board and plug it in or unplug the xt60’s to turn it on and off at the moment.

Here are a few videos the first night she ran:

https://streamable.com/ubhpu ^You can see the motor mounts have moved and sagged quite a bit here. 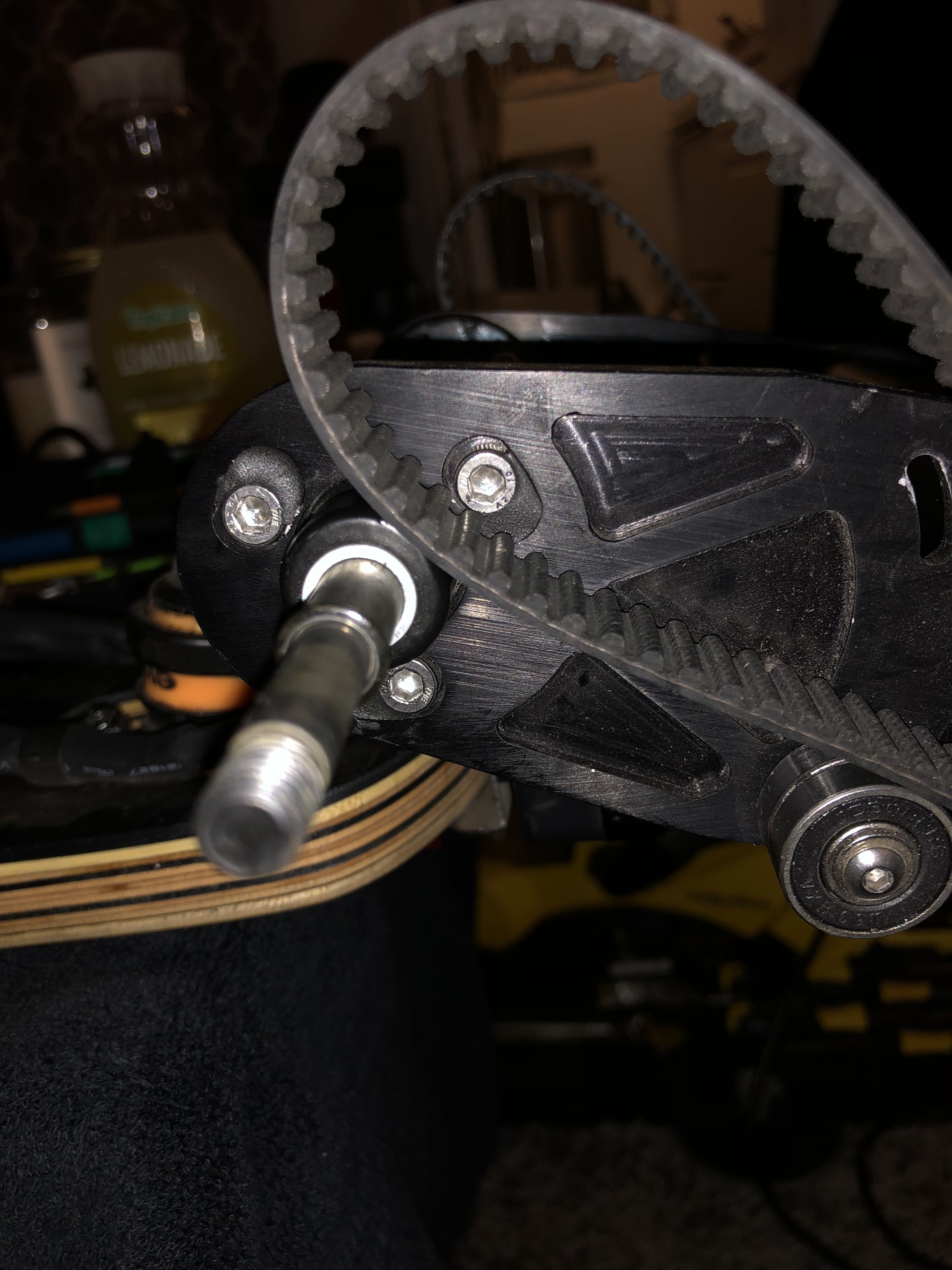 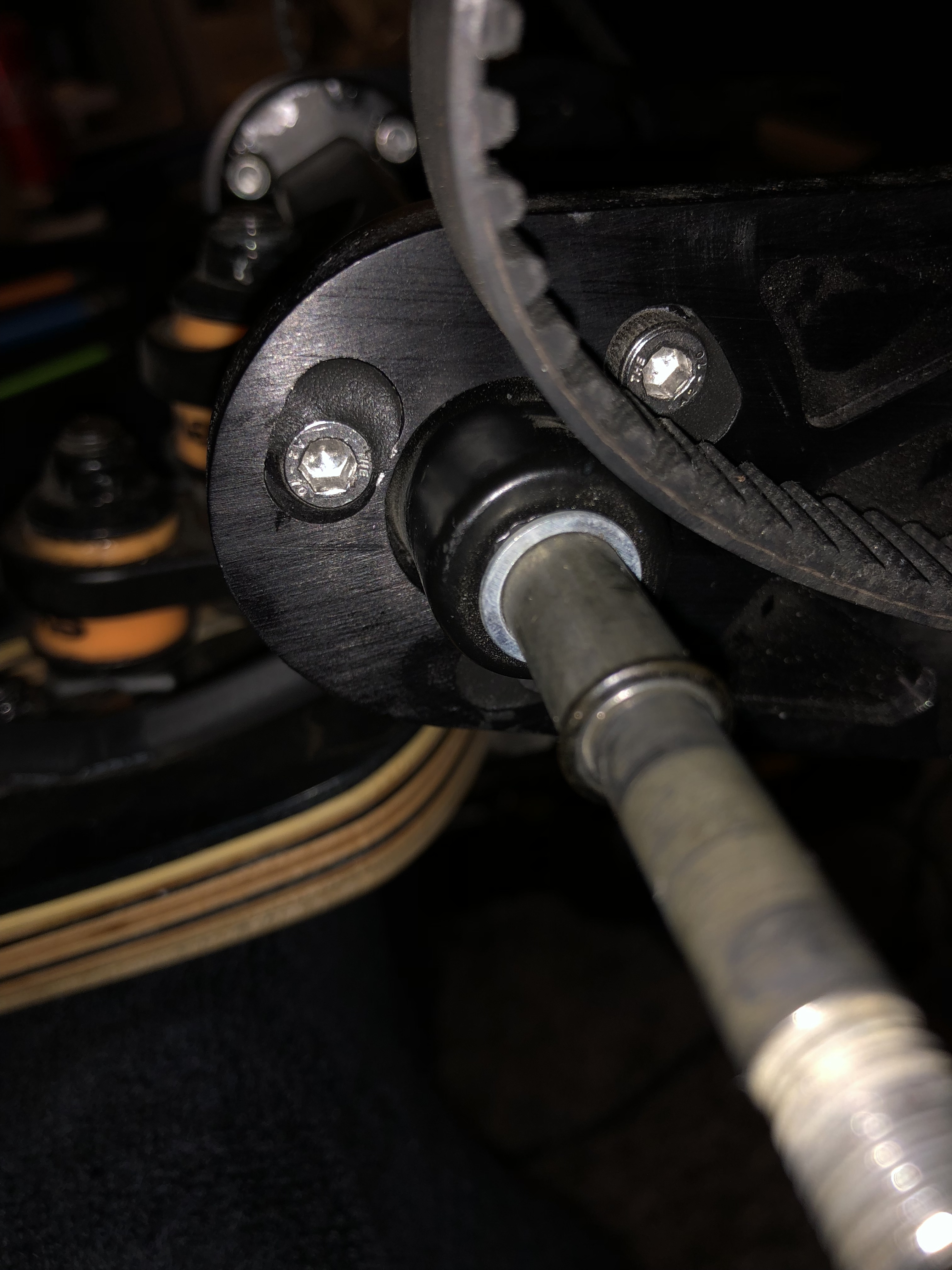 Mounts continue to sag, possibly due to torque and/or vibrations.

Added blue loctite and jammed some Sugru as a secondary level of prevention. Torqued the shit out of the bolts this time, will test when the weather clears.

A longer distance ride. Some notes:

Amazing board, almost what mine will hopefully look like soon, and the efficiency is also great, running belts as loose as possible makes a lot of difference The temperature looks fine for now, but as you get used to it you will run harder and harder

If the mounts continue to move you can try to apply bearing retaining fluid between the surfaces, not on the screws, continue to use thread lock on them and it’s a must to let everything dry at least 24h before riding

If the mounts continue to move you can try to apply bearing retaining fluid between the surfaces, not on the screws, continue to use thread lock on them and it’s a must to let everything dry at least 24h before riding

I seriously considered dropping some loctite green between the mount and evolve trucks, but I’ll see how this holds up for now.

I’d rather not have to torch my trucks to remove my mounts, lol.

How are your hobbysky motors holding up?

About 75 miles on them so far with no issues. When I ordered them on Amazon I messaged the seller to customize then with 8mm shafts. You can also request custom Kv. So far so good, but I’m worried that I’ll encounter the same issues others have been dealing with loose magnets. Time will tell.

Nice build! How do you find the metr pro connection through the carbon of the hummie deck?

Oh and where do you get quasi brake lights from!?

I get random Bluetooth disconnects, but I’m not sure if it’s the deck or my iPhone X.

I purchased the taillights off Aliexpress but one of them already went out probably due to vibration, so I can’t really recommend them.

This way you will loose idler tension benefit only on hard acceleration. This is preferable to loosing tension under hard breaking. Right? For those oh shit moments when you really really really need to slow down, the top idler helps prevent pulleys from skipping teeth in these circumstances.

Hello !, Could you let me know how to convert sensor connector??