After getting a HM-10 chip and using @emmaanuel 's iOS app, I have been trying to fine tune my board. I have come to realize that I’m sagging more than normally would expect.

The graph below is with a 10s3p (LG HG2) starting out at 40v. Going up slight hills I’m sagging down into the 29-30v range to where the VESC resets. On a 15min ride, I generally will have a couple of cutouts.

Is this a logical analysis of why the sagging is occurring down this far with near full charge? Does the graph tell a different story? Do you think the hop from 36T to 40T will have a decent impact on this sag?

This is where a VESC reset happened.

Is there a way for you to see what is happening in cell level? The drop in voltage looks a bit abnormal if u ask.me. though i would like to check your graph from pc as from mobile i cant see everything clearly.

Using BMS? Specs? Pics of battery, series, parallel connections would help too Sagging to 3V/cell is not normal

I looked at your vesc settings you are drawing 30a to each motor on a battery that can output 60a max, you are essentially drawing max current from quite frequently damaging your cells causing this effect which is voltage sag, try more conservative settings

Thanks for spotting this. I had idea he is somehow overstressing the cells but couldnt make out the numbers in graph… probably problem solved, either he needs to limit power vesc can take or upgrade his battery

But his avg battery current (roughly estimated by the given graph) is about 20A max.

Your voltage sag does not look normal for a 10s3p pack made from HG2 cells. In the graph you are pulling about 7A/cell. We can estimate the expected voltage sag from discharge charts. The difference in the red line to the light blue line is the voltage drop for 7A/cell loading; reading off points at the 1.5Ah line:

If you are actually pulling 20A per motor and not 20A total, your expected voltage sag would be: 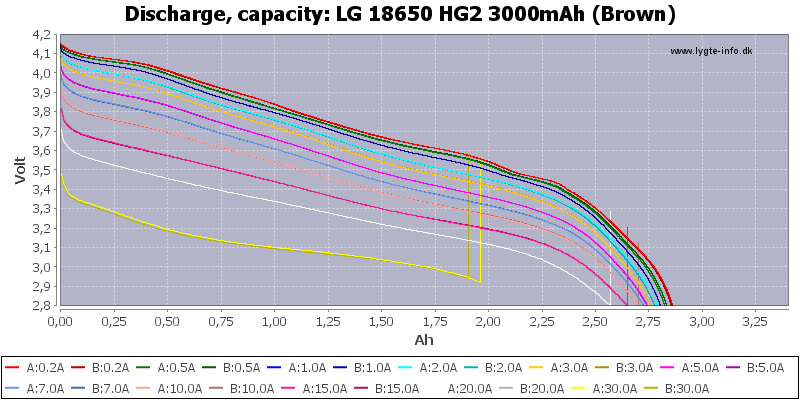 It seems like you have another issue at hand. Perhaps your serial connections cannot handle this load. How is your battery constructed? Maybe you are unknowingly using nickel-plated steel, which has a higher resistance and would lead to a more severe voltage drop under load

Thanks for the input guys .

I am using copper grounding strap for my battery connections. I read other people doing this without issues and I used 3/8" with 40A rating which is equivalent to 8AWG which I believe people were using as well.

I checked V of every cell before the build and then between each series after I built. I’m not sure which direction i could go with testing it. Charging, capacity, and the distance i can go on the board all seem to be normal.

Here are the exact details of my build. I am discharging without BMS with 100A Fuse Currently.

Controller ID: 1 No App Send Status Over CAN 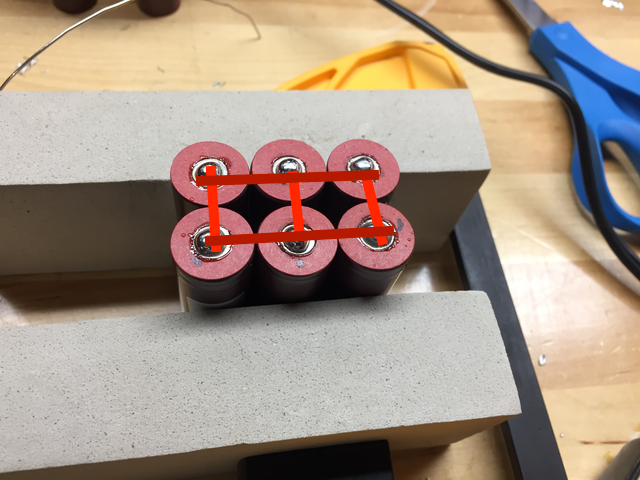 After researching and looking at the graph more it just seems that possibly the internal resistance of these batteries are high means they are dying. Maybe they were either bad or I damaged them in some way.

I’ve seen here and there posts about people having trouble with their batteries, some from DX (I’ve had issues, too) and other places, so now’s a good time to post a simple test you can do to find the health of your rechargeable battery.

For an example I’ll use a common 18650 li-ion cell. When fully charged these carry a potential of 4.2-4.25V and when discharged 3V. This is true of any cell that hasn’t shut down whether it’s new or old and tired. So what is the difference between a new cell and an old cell? Internally a battery consists of an electrolyte/electrode interface where the potential is generated by chemical reactions. As the reactions progress forward and are reversed during charging, the interface slowly degrades. This degradation results in not only a loss of capacity but also an increase in what is known as the batteries internal resistance.

Measuring the battery’s internal resistance is simple. All you need is a 4 ohm 5W power resistor or similar and a multimeter. Five common 1W 1 Ohm resistors in series would work. If you aren’t measuring an 18650, choose a load resistance that will load the cell but not overload it. Capacity/3 should be ok.

Example: cell measures 4.2V unloaded, 4.0V when connected to a 4 ohm resistor has an internal resistance of 200 mOhms (0.2 ohms)

A new high quality 18650 battery will have an internal resistance under 100mOhms.

So, feel free to test a few batteries you have around and post what you find!!

Good tip. He needs to meausre internal resistance. Some chargers can do this, if u select right mode

I would check the series connections. This sag isn’t normal unless you’ve been cycling the cells daily for atleast 2 years. If your cell resistance was as high as suggested above you wouldn’t be able to fully charge, it would get stuck at like 4.1-4.15 or even lower and start heating up like crazy, and drop voltage as soon as you remove from charger.

Well these characteristics are definitely not happening. I’m not sure where i could go with testing the series. If you look at the battery image above, you can see the pattern of how i soldered the braid to make the series (image 1). I then fold it over. (image 2) In the back of my head, I wonder if this would be an issue. I’ve also heard people preach about not soldering batteries. None of them got so hot where I couldn’t hold them - so i like to think that i didn’t damage it.

Check that the series connections didn’t get burned Also you don’t have insulator caps on the cells?(nvm just saw them) You do seem to have solder spray all over… How is this not shorted 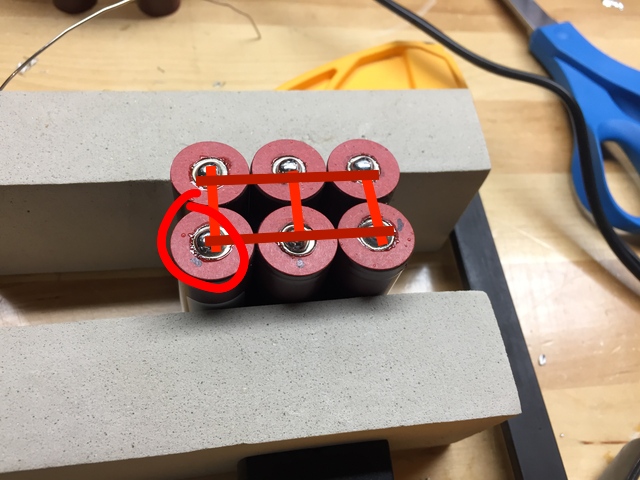 sorry for my ignorance - Here is an unwrapped Cell. Is the suggestion that I’m touching these two points? 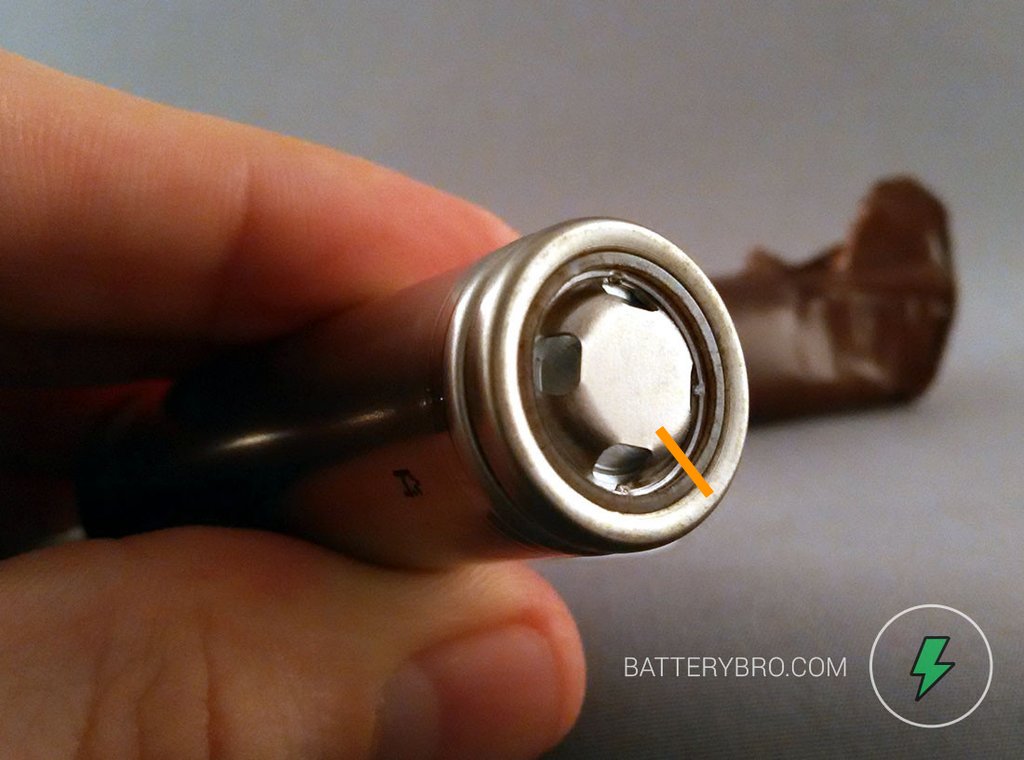 Yes and if there are loose solder balls they can be randomly shorting and sparking, eating away at your connections.

Lets just say in theory - if it was one loose ball - That 3 battery section becomes the weak link and then becomes 10s2… Bringing it down to 40A discharge . 40A/2 VESC would be about 20A which is about what I was getting in the graphs.

Not sure if any of this is logical or im just rambling.

You have a bad weld or solder joint somewhere in your battery. Do you own a multimeter?

You need to check the voltages across each group of parallel cells. If there is a group or groups out of balance then that would be where I wiuld start.

If all is good on the initial test, charge your battery and measure all voltages again. If all is good, go for a ride, and measure your voltages after. If you have a bad solder joint then one or several of the groups will be at a different voltage than the rest.

Another possibility but noy as likely, is a bad BMS if you have one. It could be turning off if it sees any of the limits being hit.

My bet would be on a bad battery