Has anyone ever played the game S.K.A.T.E? For those who haven’t it’s an old skool skateboard game where someone sets the trick and others have to copy it. If you can’t match the trick you get a letter. The last person to spell SKATE wins.

To make this more fun and fairer we’ve changed the rules for this platfom:

NOTE: For all entries to count you MUST wear a helmet at a bare minimum!

Current Leader: @rich - the first person to get A. Killing the game, and his board, in persuit of S.K.A.T.E awesomeness!

The first trick: Ollie Something 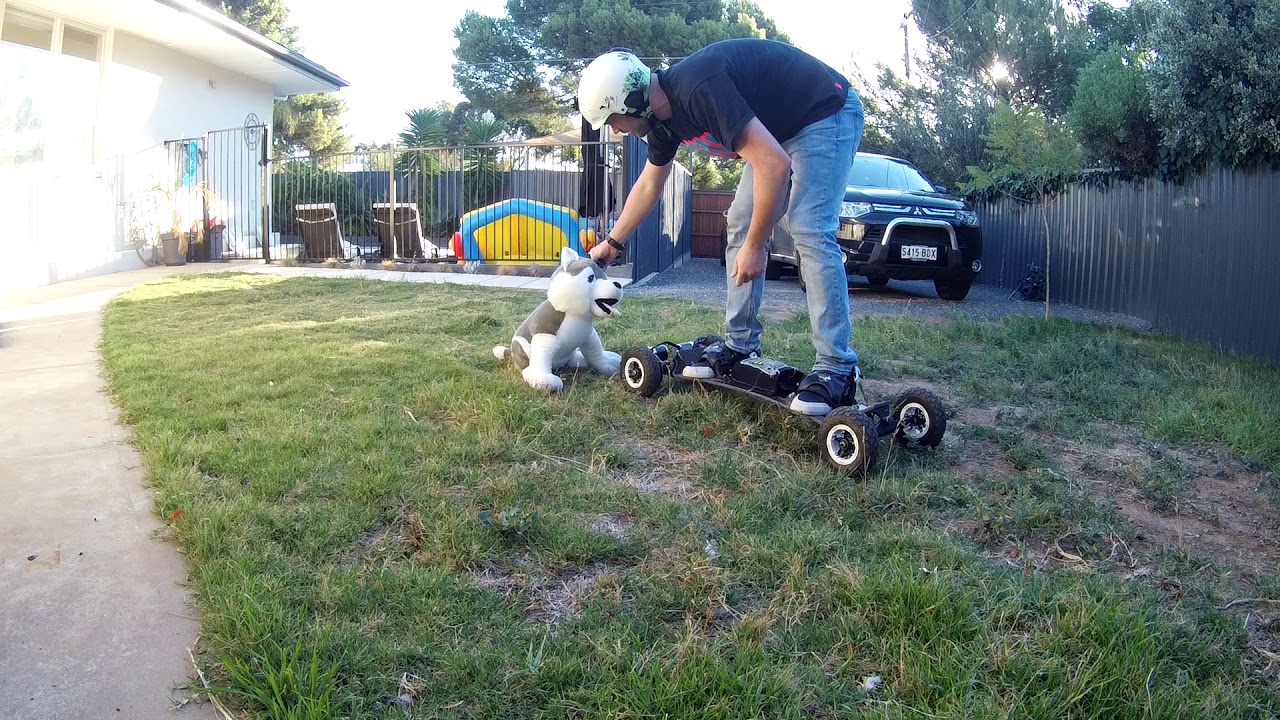 This is a straight forward Ollie over an inamimate (or animate!) object of your choosing! All you have to do is jump over it! This should hopefully get some names chalked up on the leaderboard! It’s also possible that an esk8er could take this one out first and set a non-strapped in trick too! Let’s see what happens 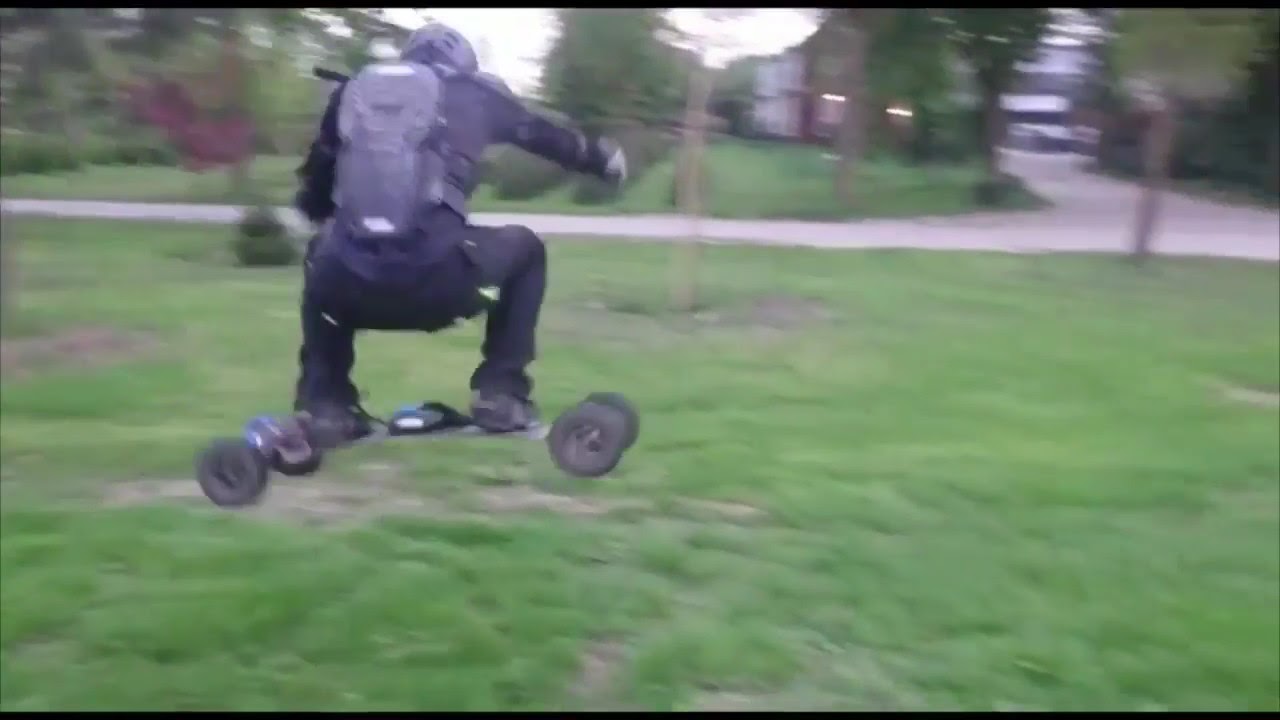 Great progression from the Ollie set by @amecces. Can’t wait to see the videos for this roll in! 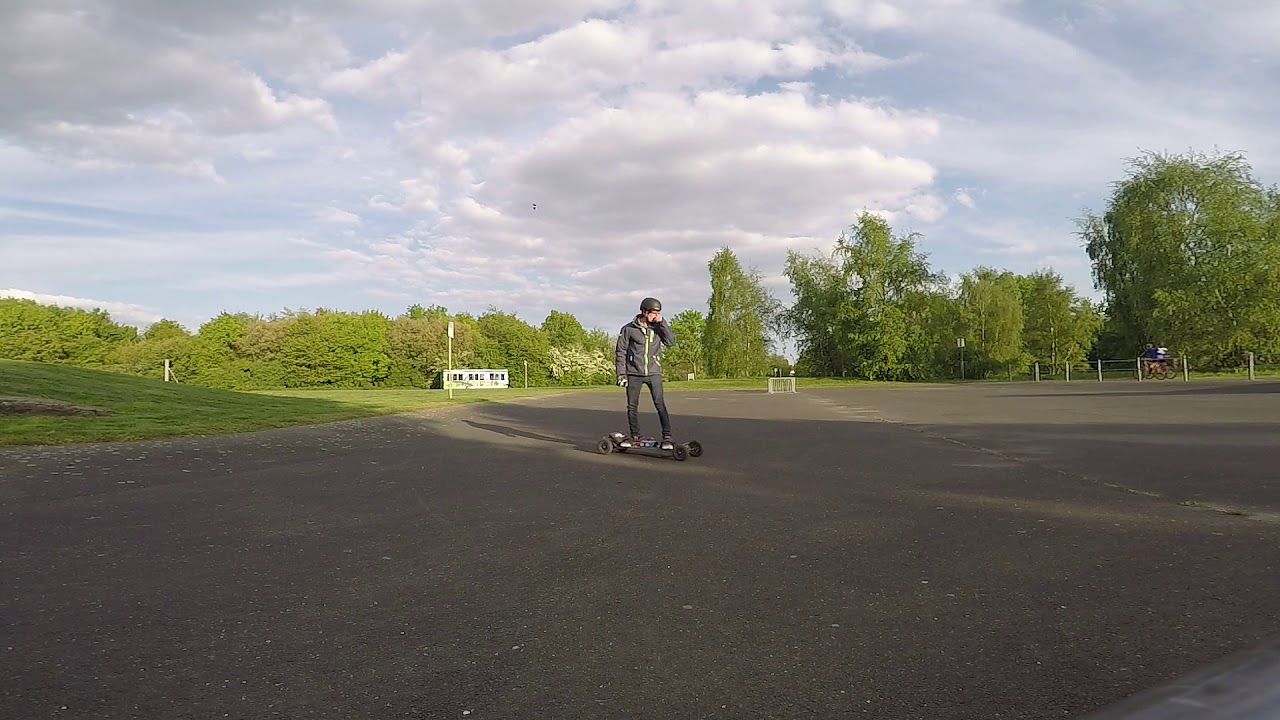 @DeathCookies taking the Nollie and switching that sh*t up! Nice variation as we get to experiment with a set up 180 or nose roll too 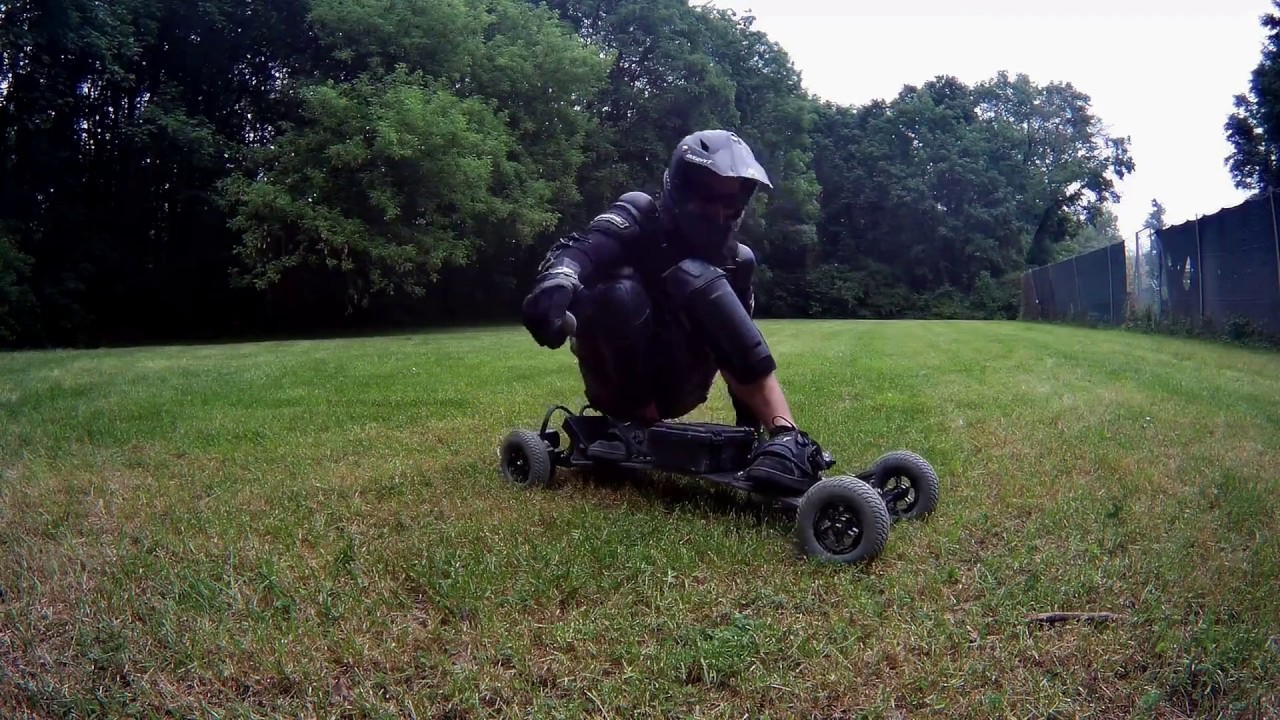 @rich mixing things up and taking full advantage of our off-road beasts! This is so rad, and looks pretty damn hard if I’m honest! I’ve abbreviated it to 360 Drift!

Nose Roll 180 This trick was originally set as the first trick but it proved to be really tricky on an e-ATB so we’re gonna park it for now!! If anyone does manage to do it though you get a letter and the pretigious title of eMTB God!!

In the video below Dylan Warren teaches a buddy how to Nose Roll 180 on a mountainboard - fast forward to the 3:55 mark to see the trick: 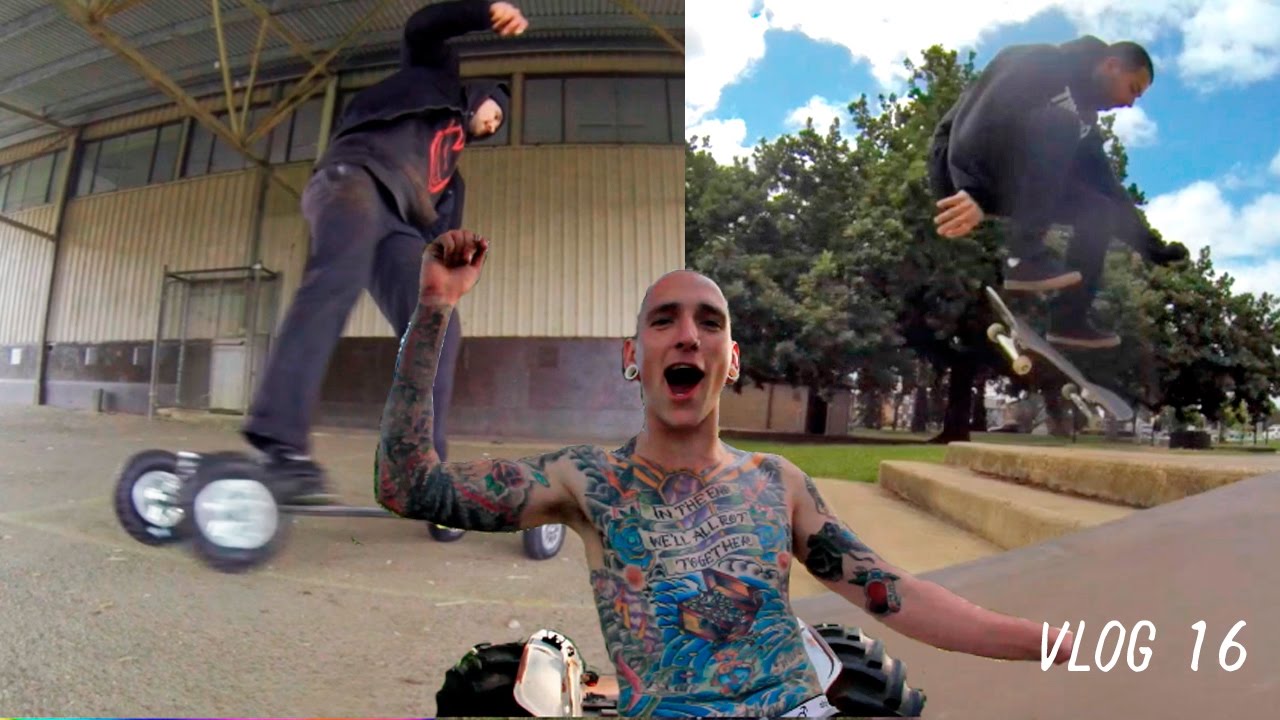 The video teaches the whole trick - frontside and backside.

S.K.A.T.E ON Brothers and Sisters!

Apologies for anyone I’ve missed btw - I could only tag 10 people in the post, but anyone with a mountainboard should try this!

@Deckoz, @Riako - have you guys got boards yet? You guys have been pretty active too

First of all this seems like a nice idea. It is kinda useless because we cannot judge if it was the first or the 50000 try but i Keep watching this battle.

So to start of the game of S.K.A.T.E I challenge all MTB and eMTBers to try and nail this trick in no more than 5 trys.

Dude I’m totally down…but my board isn’t quite here yet… and I will need the milled hangar from Jens, as I pieced together hangars… but as soon as it is…

LOL - that’s true…but remember the only person you’re cheating is yourself!!

Thats the nice sentence everyone tells but in the end you are cheating to yourself AND to the others.

I am really tempted to take part of the challenge. It is fun with a snowboard but i never tried it with a mtb or emtb. probably gonna stick to a mtb for this trick to have a balanced board. Makes it easier. Maybe a bit cheating but we do not have any rules yet

edit: no rules except getting the trick fluid.

You never know man - the trick might still be waiting for ya!

If not, the next person might set an eSK8 trick for you to try!

Matt and Andy Brind have set a pace this weekend. First time on an electric board… They will post some stuff the next days, I’m pretty sure about that.

Well, I think you like to see people failing

Count me in but for sure I can’t do it, I can’t even balance on the nose, that’s difficult man.

What’s the dead line for this trick?

360 challenge sounds good but stairs not

Nice, didn’t notice you post this, just gone and posted the same vid in a new topic; https://www.electric-skateboard.builders/t/emtb-progression/52442?u=andybigd

Damn… I tried to jump, couldn’t even lift the back leg (motor mount and batteries are just heavy). I ride goofy, so that makes it worst to lift left leg higher

We put Matt and Andy on a single drive, small battery, two 6S 6200mAh Lipos. The pump track they rocked doesn’t consume a lot of battery. It’s more about the better flow and extra e-boost to nail the jumps faster and higher. After one hour of riding the battery was still half full. The twin is to heavy for that kind of action. Next thing on the list: Electric backflip on a big ramp.

Anyways…I was thinking it could be quite fun for us to take turns uploading a vid and then everyone try to match it!

Great idea man. I’m not yet there with my build, but will happily follow this, and join in, when i can for sure.

What’s the dead line for this trick?

No deadline as such - unless this goes for a couple of weeks without a successful trick in which case we’ll pick another trick! I’ve woken up this morning feeling bloody awful so it might be a few days before I can try it now

@trampa I’m not entirely sure you’ve understood the nature of the game!!

…that said this is a beauty of a 360. Those guys are seriously next level - bet you’re glad you signed them. Looking forward to seeing what they can do on these things.

Nice, didn’t notice you post this, just gone and posted the same vid in a new topic; eMTB Progression

That’s all good - they can totally function as seperate topics. This one is supposed to be a game of SKATE - the purpose is to help push each other and encourage our group development but it’s also to have a bit of fun trying to better each others tricks and just have a bit of a laugh So this build is pretty quick and dirty. I slapped it together in an hour so its not pretty but it does fill a hole in my eskate collection. A small easy to carry board that can fit on a backpack, good for shops or public transport. But not a...

So sick dude!!! I’ll love to see some legit skate tricks on this! I saw that FabTrav (youtube dude) tre flip a Lou board before so those tricks are out there on eSK8s for sure!! Maybe start with an ollie 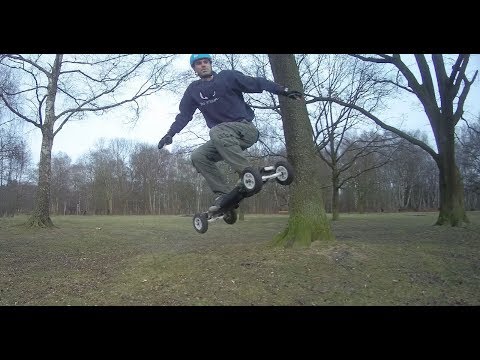 Yeah it’s a great idea. I plan to join in as soon as I get mine built up, may be a good month or 2 yet though till all my parts come in

Keeping it light seems to be the way to do it for freestyle. And I was gonna say it won’t be long till one of them backflips an eTrampa…