Snow with an Esk8?

Ive been thinking about how to handle snow with an electric skateboard. Besides water proofing, what considerations need to be made? Is there a need to heat li-ion cells if the temp is below freezing? Will temps below zero damage cells?

On another note, I found these and have to say I’m intrigued… Im thinking about getting a set and using 2 on my board and 2 on my kids, if we get any snow this year.

Is there a need to heat li-ion cells if the temp is below freezing? Will temps below zero damage cells?

Yes you’ll lose capacity quick at low temps. my drone couldn’t even fly when I took it to the snow. and that wasn’t even near 30F more like 40-50F… not even below zero…

Maybe some heavy insulation would be enough. once you get going they should generate enough heat to keep going.

Ski’s on front would be cool, but i wonder if you can still turn…

Honestly I would just get a blank deck. and make a pull cable from a spare motor. toss a pulley over a tree or something…

Ski’s on front would be cool, but i wonder if you can still turn…

I don’t know either, I am curious though, looks like a crap ton of fun

We don’t get much snow around here, but good lord I’m dying to try these out.

I have some ideas I hope to implement by next winter involving snow and boards… Things are going to change when it comes to how ski patrol gets around… Having the motor designs allows me to slightly modify designs to adapt it to other purposes. I can’t say much more since I still need to get patents. But I have something up my sleeve.

I had a lithium battery on my motorbike iirc the way to get the cca/power was to put the lights on first for a minute before trying to start it, wondering if the same applies to lo-ion

I skated through last winter when it was absolutely freezing in Chicago and everything still worked okay would guess there is some power loss but the wind makes it hard to tell really:

Seems like the little bit of current/warming initially is a good idea but I don’t think it will cause long term damage to the cells to use them in the cold (do Tesla cars have some sort of warming element for the batteries?).

Edit answering my own question yes they do temperature management on the battery for charging to keep it cool and to keep it warm in the cold it seems https://teslamotorsclub.com/tmc/threads/battery-temperature-management.70726/

If you have the room, get the 10" complete wheel from harbor freight.

Throw away the hub.

Might want to glue the bead to your hub to keep the tire from slipping.

Seems like a piece of a freestyle single ski attached to the front truck would work way better than the “skis” above.

Was a sad day, bummed out… A few weeks ago the skateboard museum near my house packed up and left.

Any idea where they went? @mmaner dude have you ever heard of fuse snow skates? Very similar to what you’re showing but maybe a bit better quality. There’s a metal edge running along the middle of the ‘ski’ to control it. Works great on ice. Not so much on snow…

I think they have a fb page. Owner’s name is Paul and he’d probs be willing to sell you just 2.

ever heard of fuse snow skates?

cant say that I have, we dont get much snow in north alabama. every 2 or 3 years we get a couple of inches, but thats about it. i just thought the skis looked like a ton of fun

May need some studded wheels. 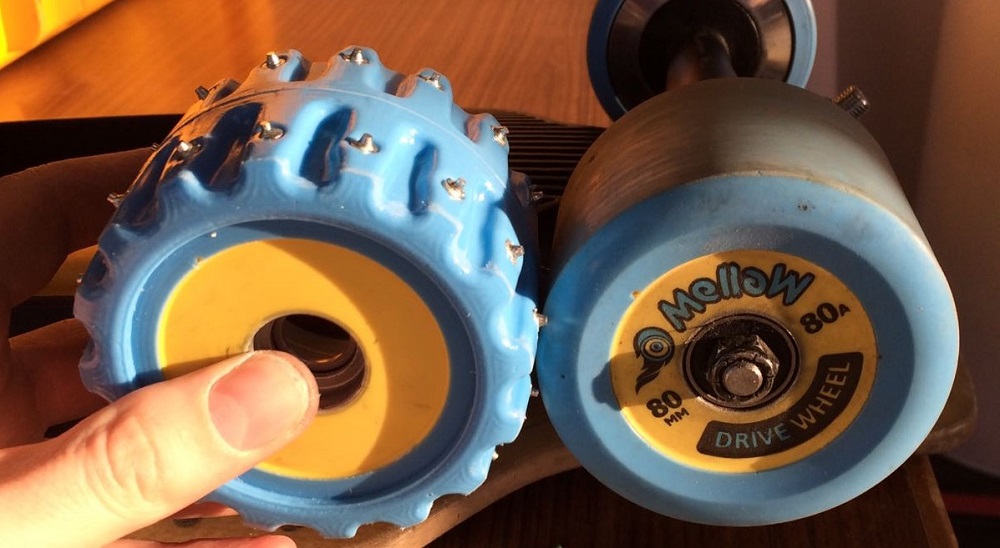 That would be good for ice. Snow, not so much

dude have you ever heard of fuse snow skates?

That’s what was at the shop/museum Thats pretty cool, I’m wondering if fabing a really short axle for my surf rodz so I can put 1 ski in the center would allow better turning? I’ll probably just have to try it and see how 2 perform and start fabing up some stupid crazy shit if it doesnt turn right

I thought about putting some small studs in some sixshooter tires too. I’ve noticed my battery capacity drains quicker under 10°C. Need more testing on that. Maybe we need winter packs?? My Ryobi P108 batteries are supposed to be made for extreme cold and I found three of my packs had bad bms’s, but the cells are all good. I just need one more pack to get 10s2p 8000. No idea how they will perform. When it hits -30°C in the new year I won’t care either HAHA that’s awesome! Those are his first versions he made in the late 90’s i believe. I actually have a set of those and a new set too. Was going to build a snow skate to have my pup pull me on. With all the friction, i’d need a pack of dogs!

It’s a cool idea but the newer snow skates (single ski in the middle) are much more efficient. Do it! For science!!

I’ve been waiting to say that lol