This is gonna be a long story time kids. I want you to know the history of this battery before you decided to get it and know why I priced it this way. It’s probably a good battery, but I don’t want to risk it with a child in the house and me being a n00b with batteries. $325 SHIPPED in the US via UPS Ground.

I purchased this battery from @WillPark16, If you have dealt with him in the past, please show your yay/nay opinion in our trusted sellers thread HERE . In his ORIGINAL POST, he listed it as “12s6p Samsung 30q Chiboard Stacked Battery”, notice how @barajabali /Chiboard is there to instill buyer’s confidence?

Within the comments he stated that the battery hasn’t gone through too many cycles, 3 cells were replaced. Seeing that Will has been polite and been on this forum for a while I decided to jump on the $500 deal, much easier since he lives close to my work to pick up that Thursday.

Upon picking it up, he showed it to me and I poked fun at him for the janky electrical tape wrapped switch and busted looking LCD. He said that’s all he had at the moment, I didn’t think much of it since those can be swapped out rather easily. I paid him cash (big mistake) and went back to the office where I noticed the box had Bara’s address and…@Exiledd_Top 's address on it. Put the two and two together and to my horror, I realize I was in possession of the infamous 4WD EVO that was in two epic crashes that was damaged twice, FIRST crash, and SECOND RIP crash.

From what I know, Miguel had Bara build the battery, the battery was repaired by Bara after the first crash. After the RIP crash, it was not sent to Bara due to potential hazard of the shorts. @psychotiller (Dave)was asked, but the repair cost was not within Miguel’s budget. Somehow, Will got possession of it when Miguel decided to not rebuild.

On Monday, I decided to plug in the charger and that’s when it sparked and burnt my finger. I did notice the middle prong in the charge port was bent, I think it finally broke off then I pushed in the charger and shorted it. It’s amazing what a millisecond of spark can do to your finger! I’ll include a new port, you just have to figure out how to solder it. The wires have been cut off and taped up. I decided to go to Dave to have him evaluated the battery. He suggested that I take the refund that Will offered. The refund was offered and because I have a good job that pays me, I was able to take the financial hit to give him three weeks to give me the refund since he already spent the $500 I paid. would’ve even been willing to give him a payment plan with no interest. $100 a month for 5 months. But he decides to just ignore someone he almost killed because he wouldn’t swap out a few $10 parts #SMH 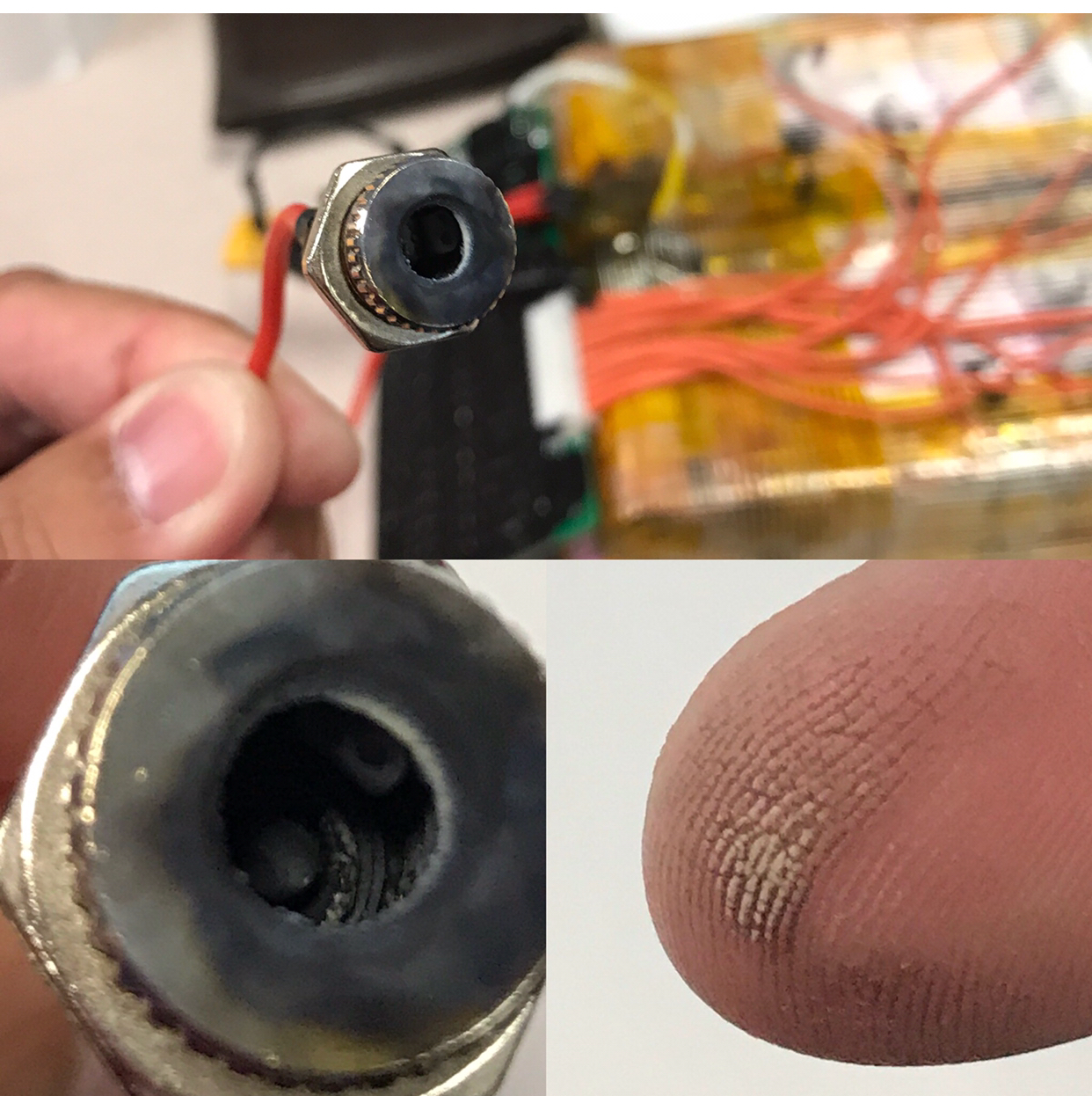 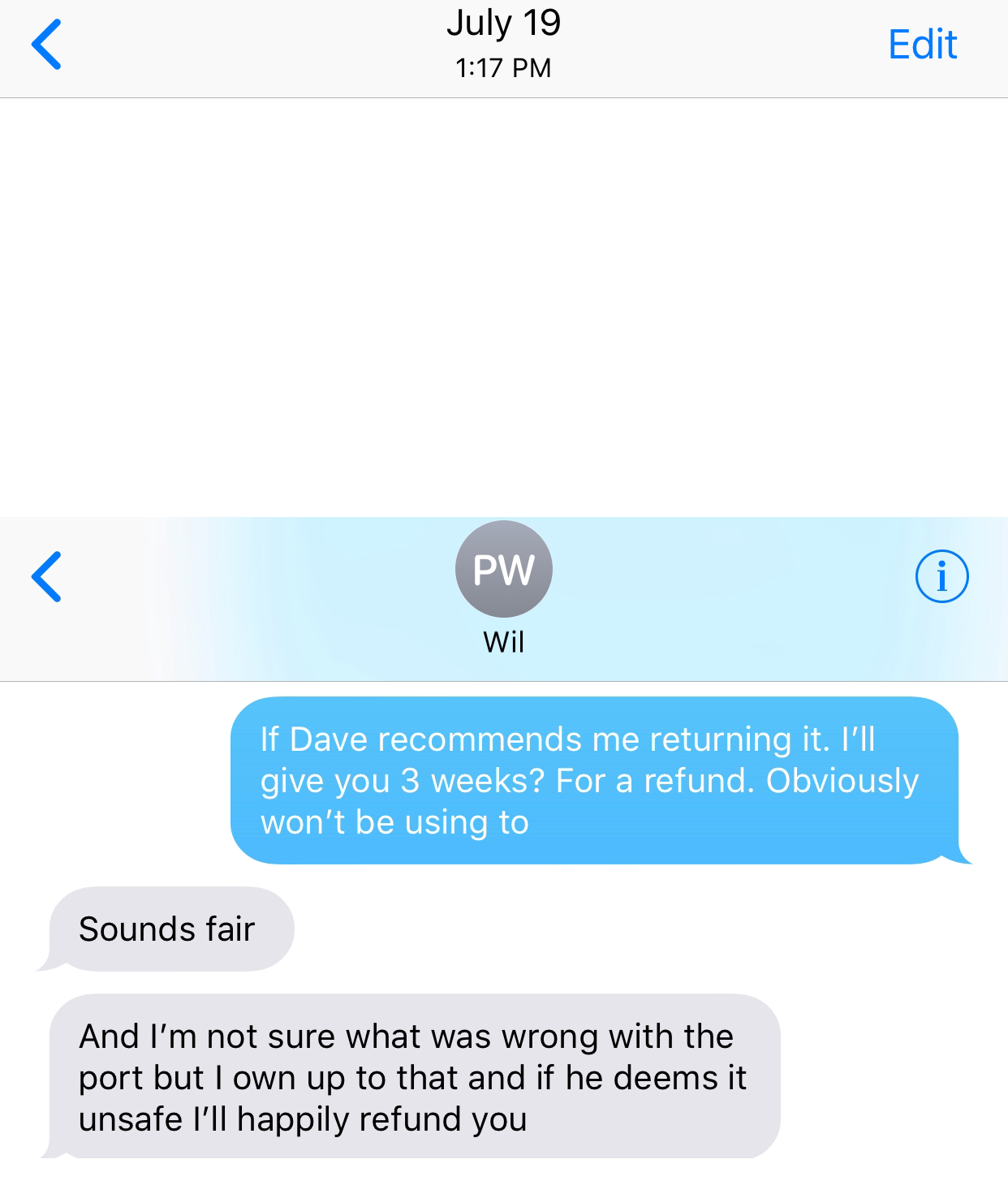 Personally I wouldn’t mind the battery if it wasn’t for that spark. Not even mentioning the source of the battery was just rude, most of us knows about that crash and it’s relevant when selling something like this. He really should’ve sold this with a better button, port and LCD, these were literally from the crash. It wouldn’t have sparked if he had just no salvaged those little parts.

Anyway, Will has ignored my messages and calls this week…as mentioned, I gave him THREE WEEKS to refund me and he just blocks me? sigh, kids these days. This is not vendor bashing, it’s community safety awareness, this 16/17 year old needs to mature up a little and be more responsible if he actually wants to be a “vendor” for something that is this dangerous.

I will also provide a heat shrink wrap so you can wrap this back up. 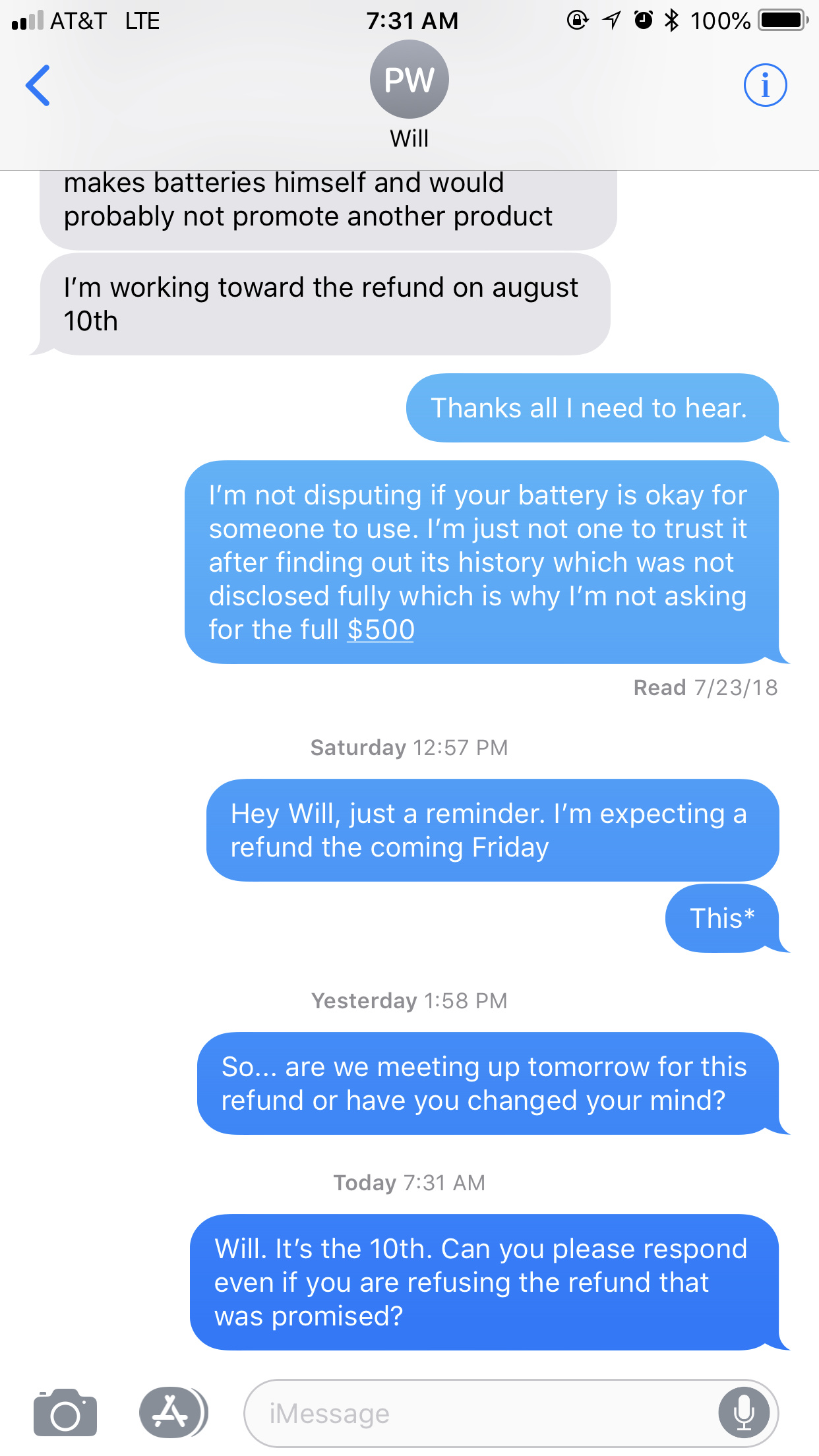 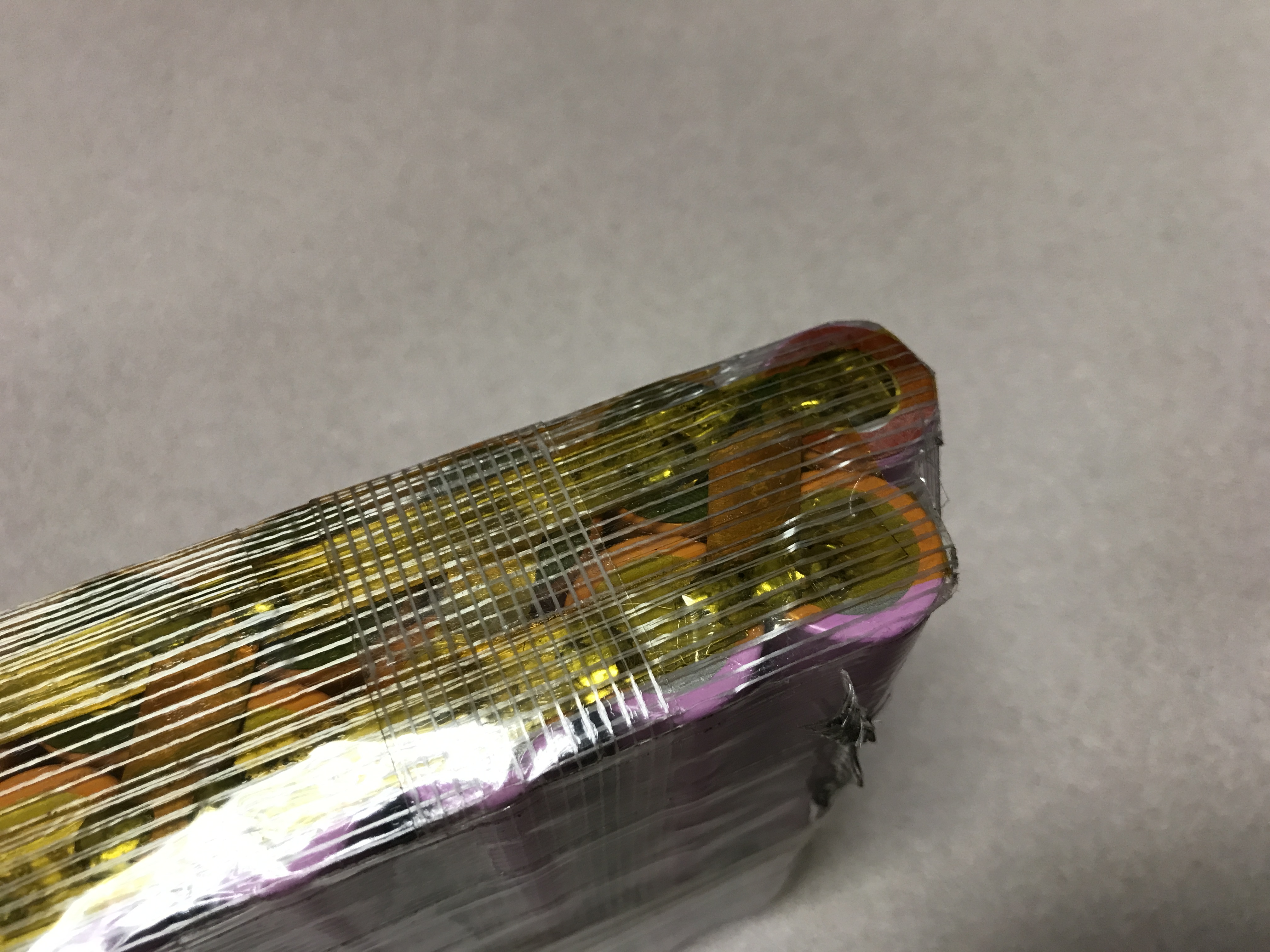 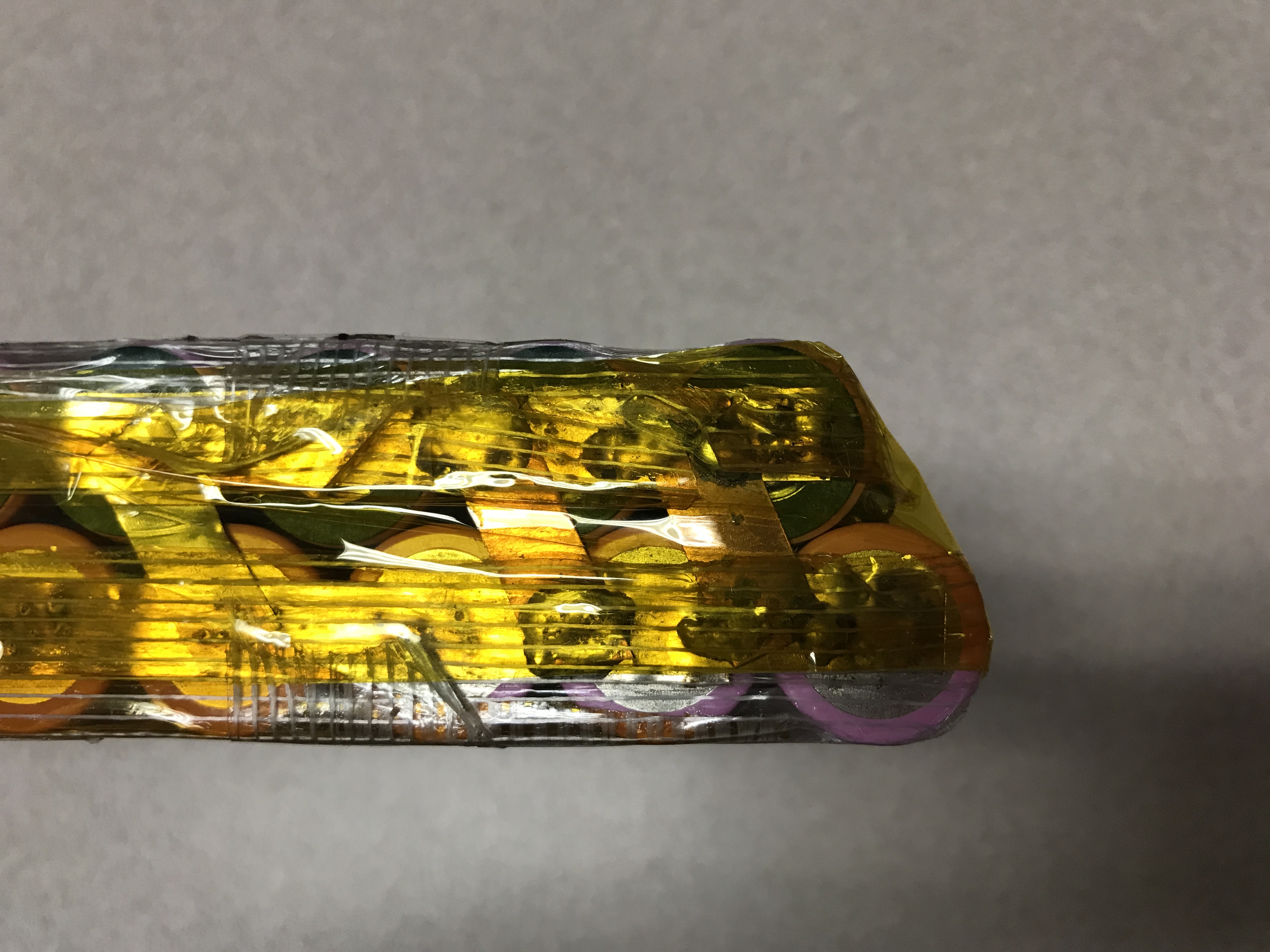 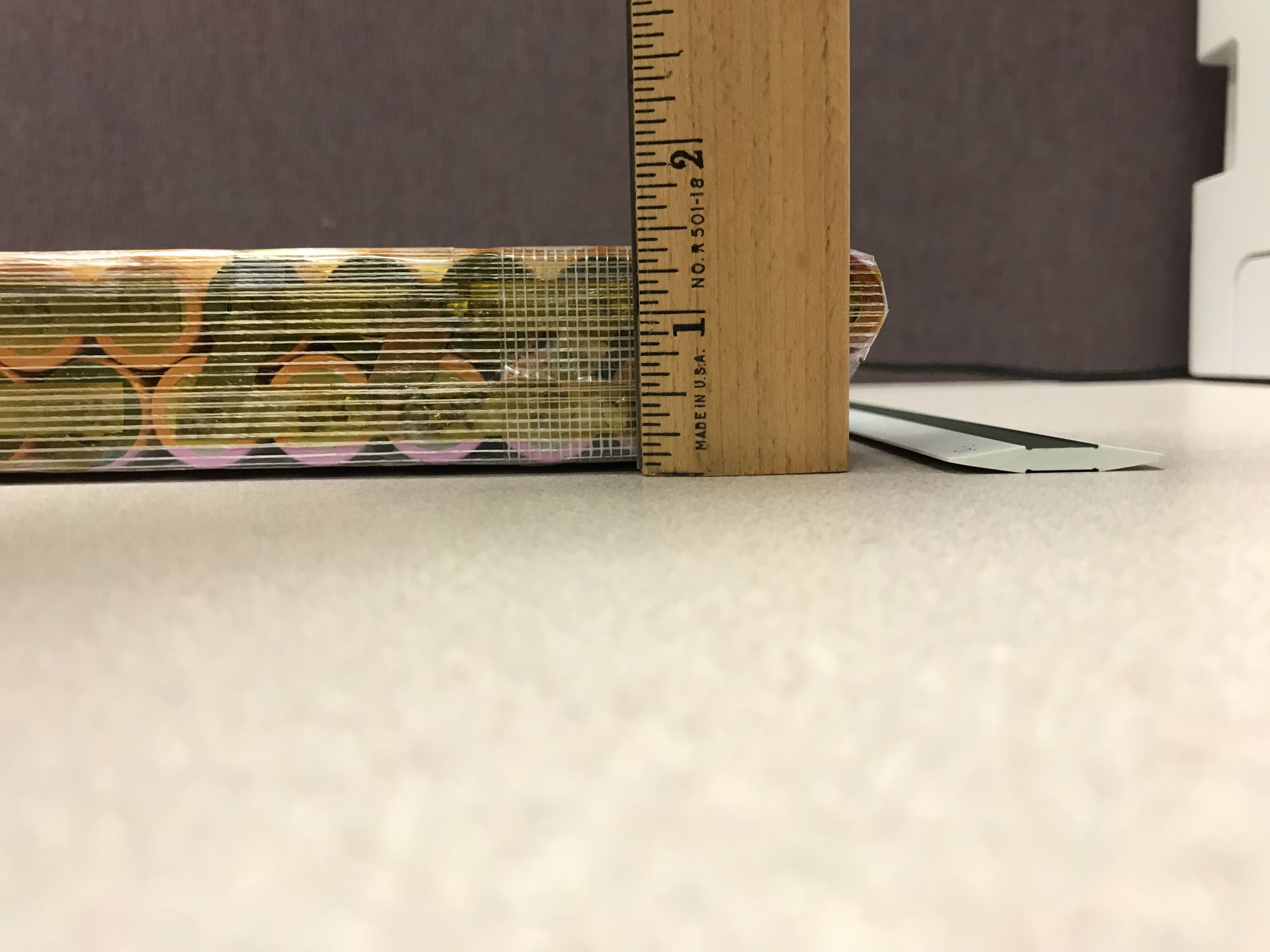 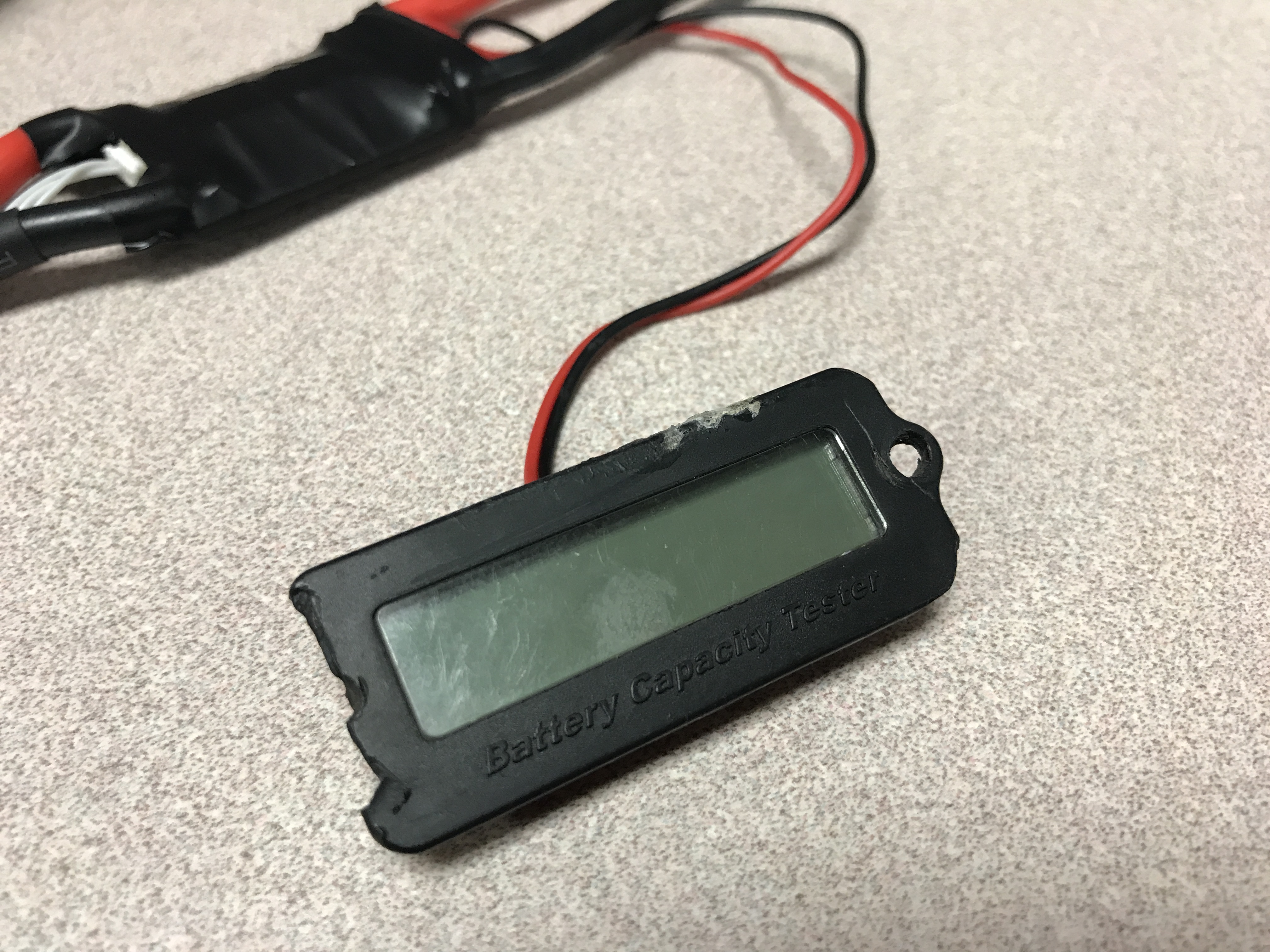 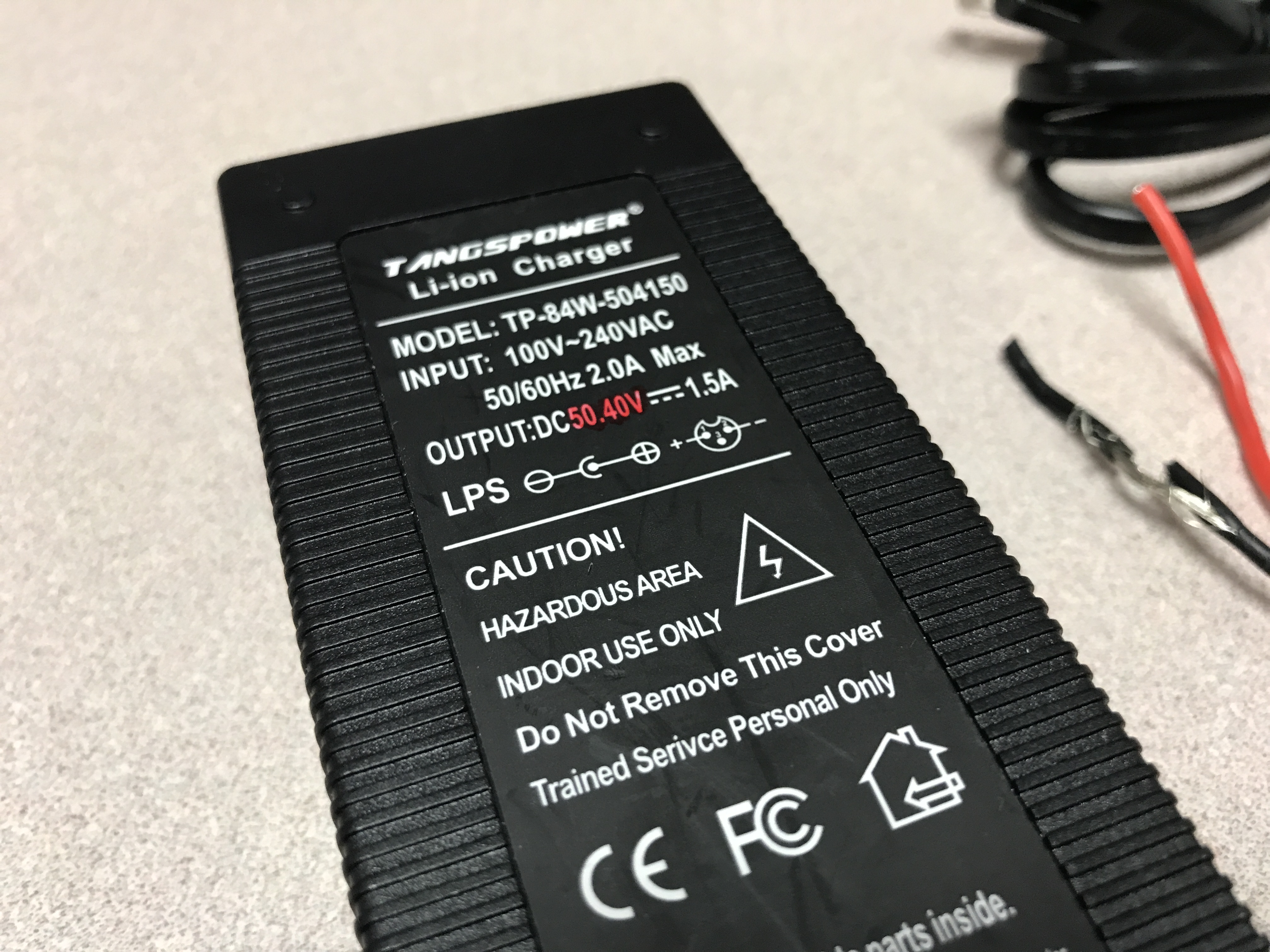 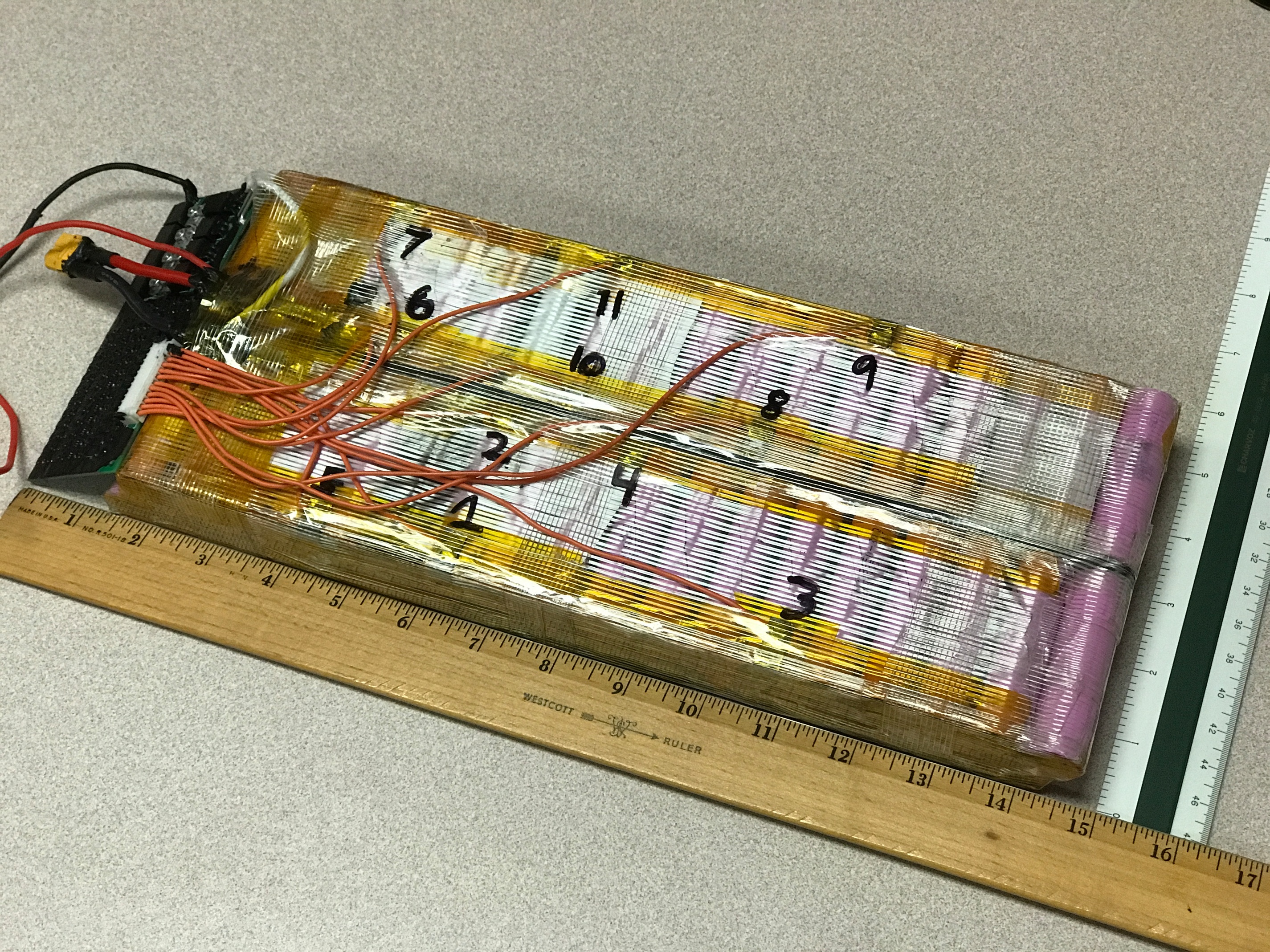 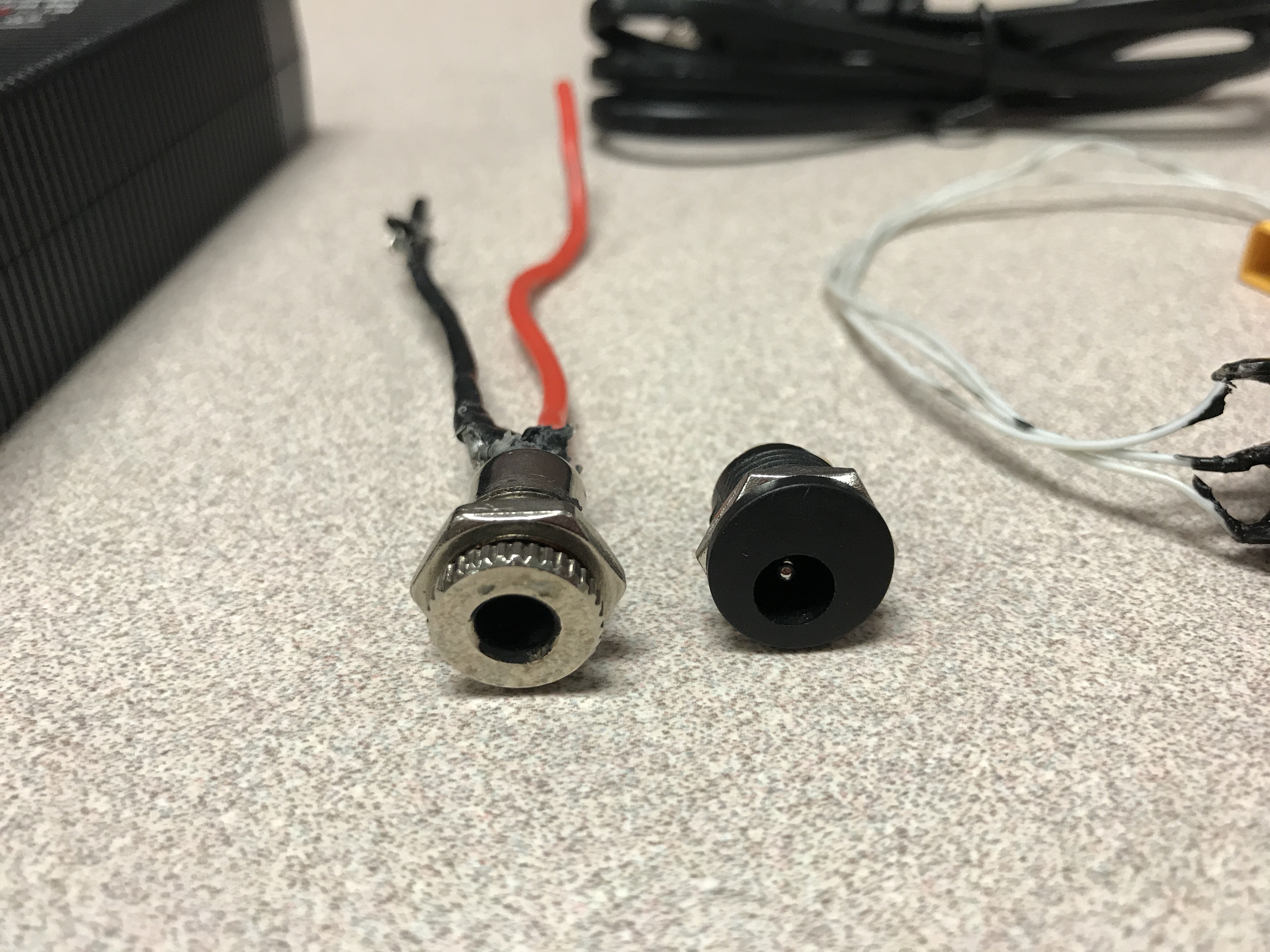 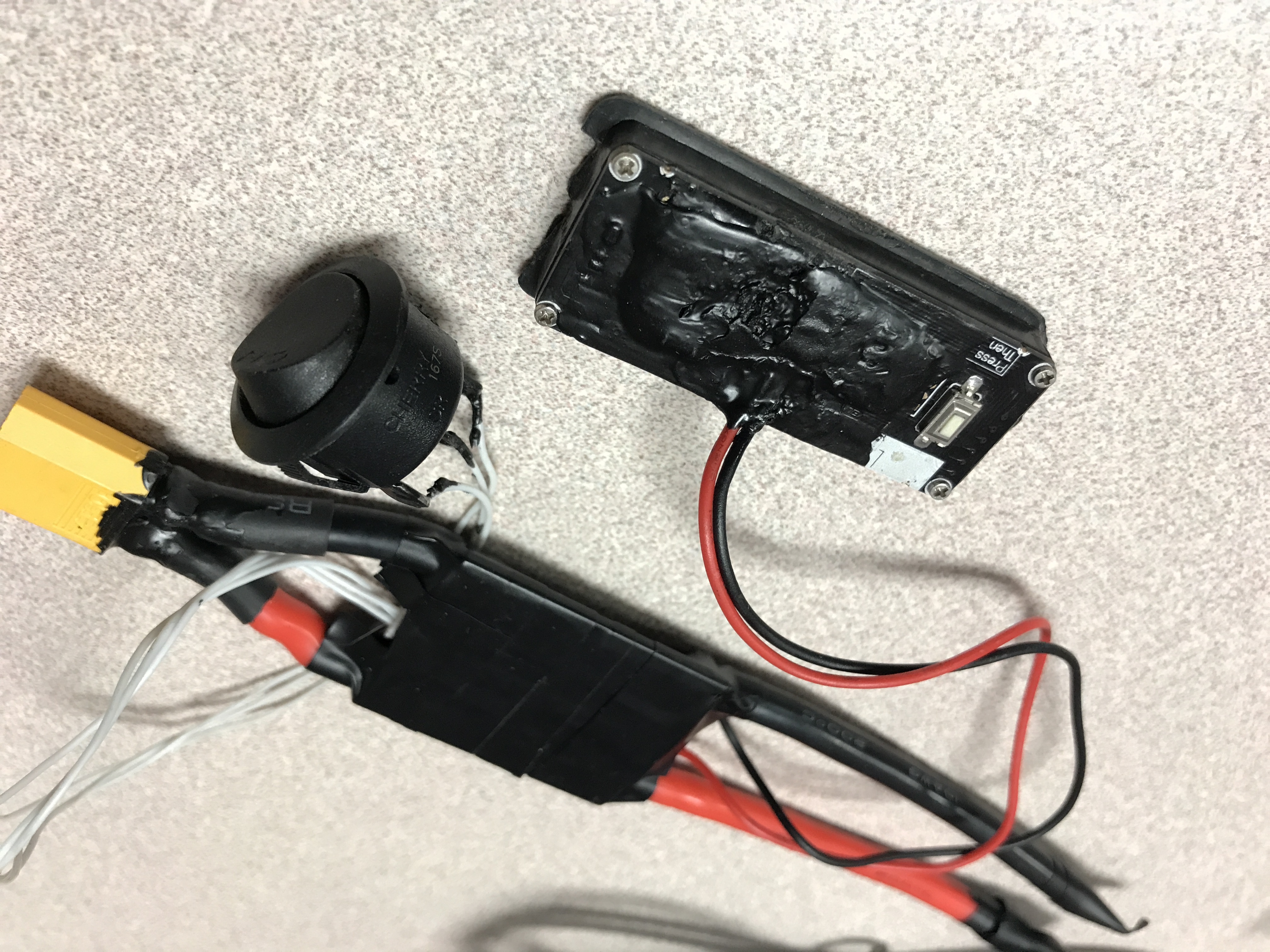 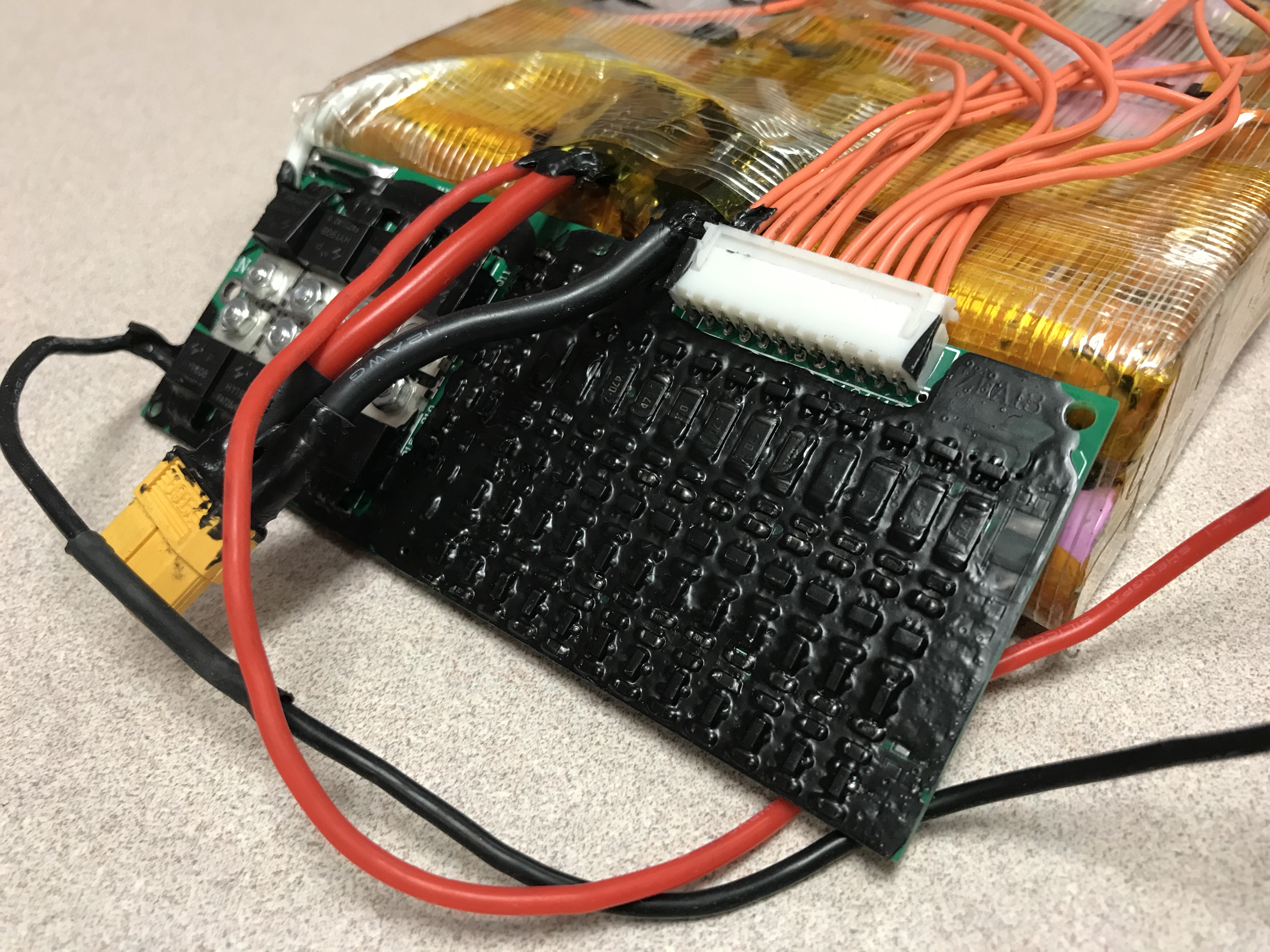 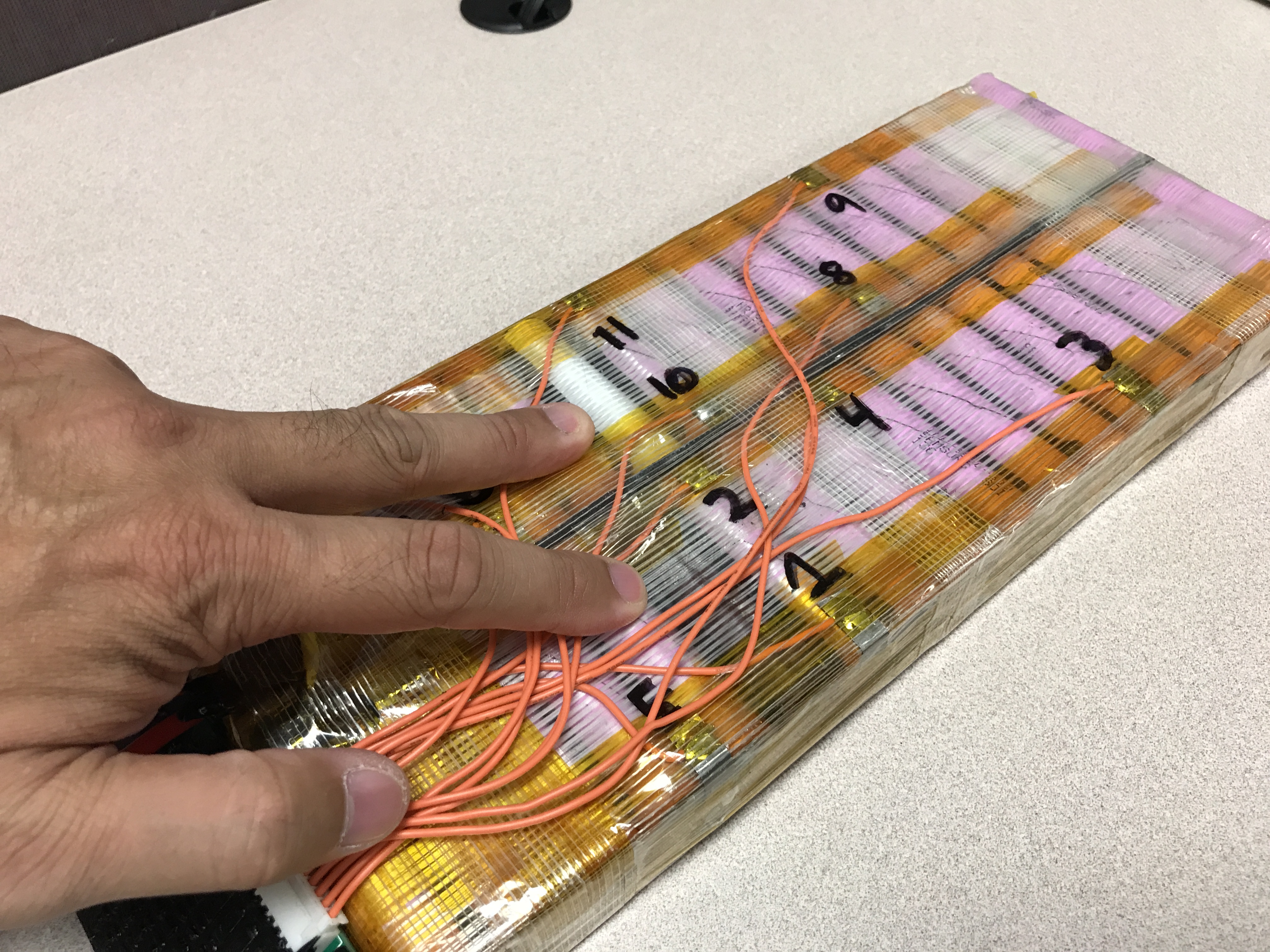 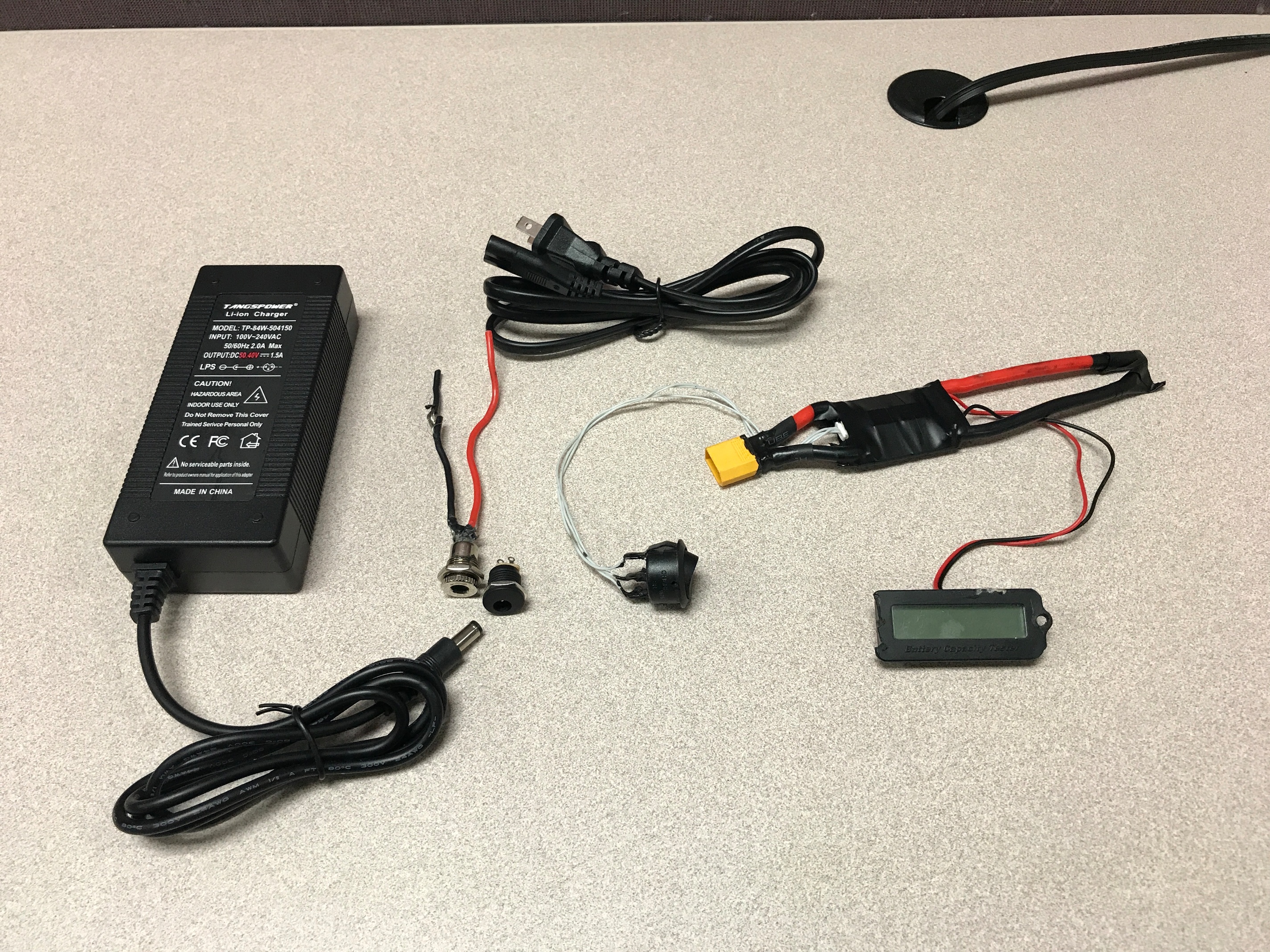 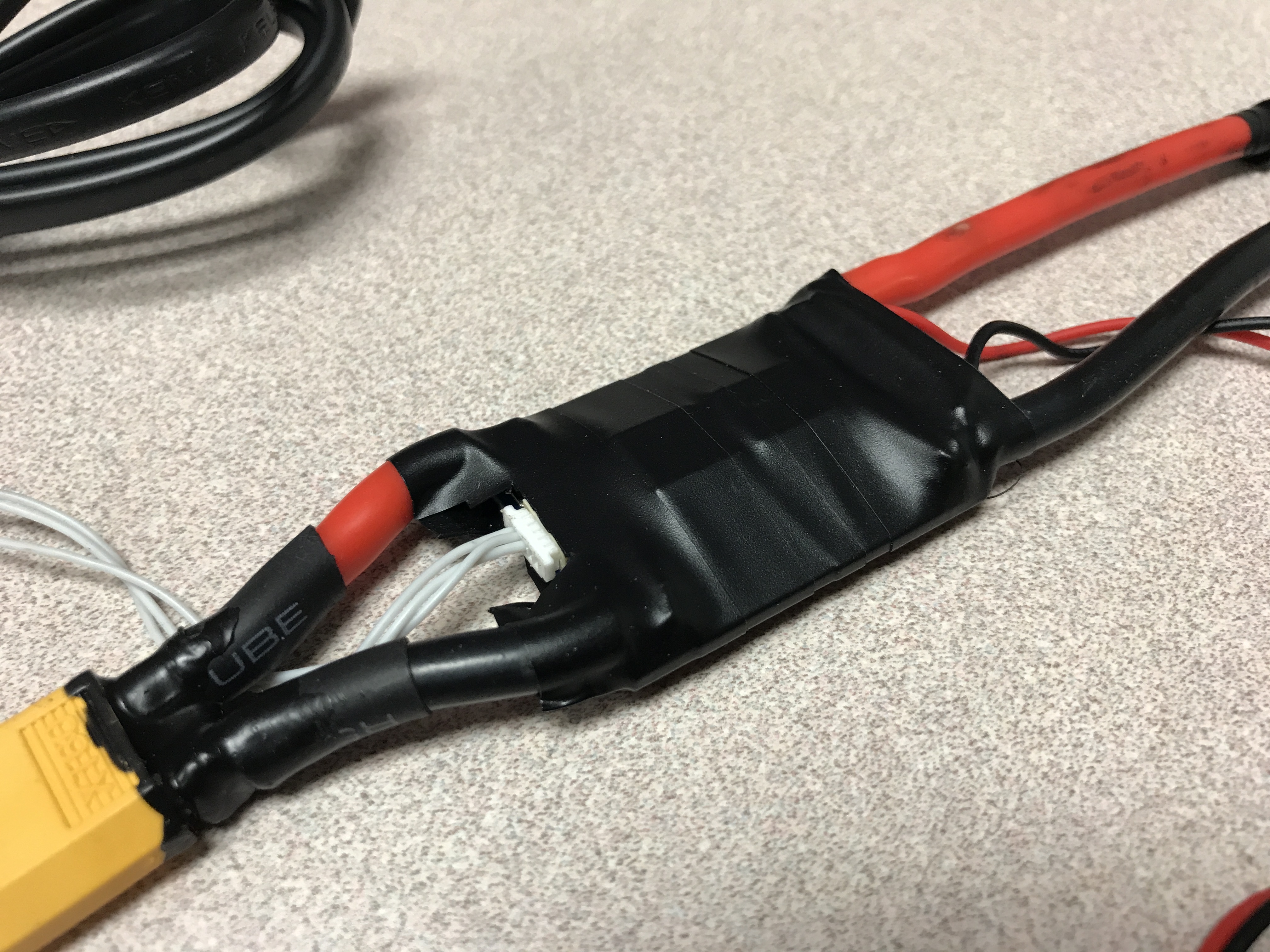 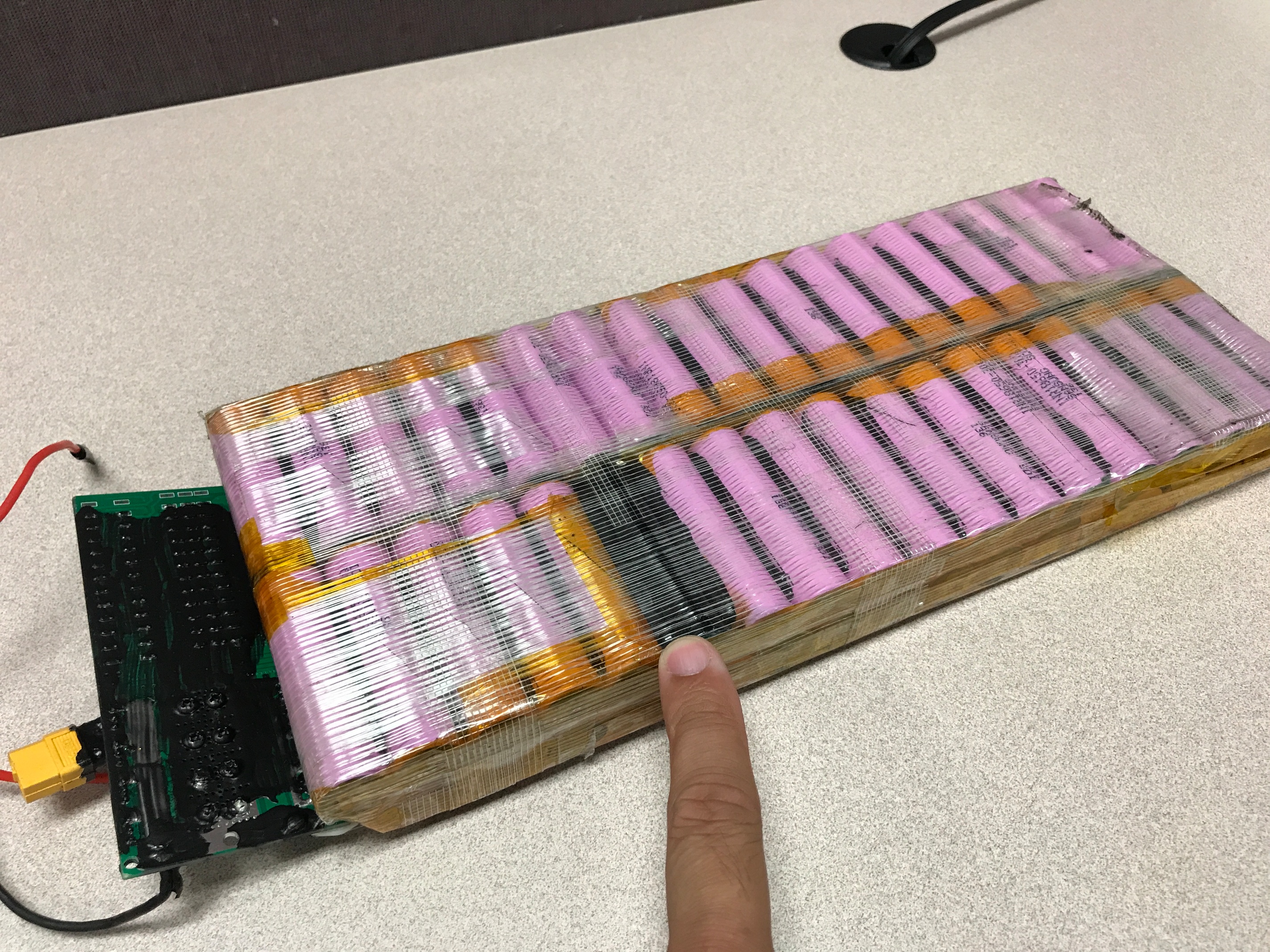 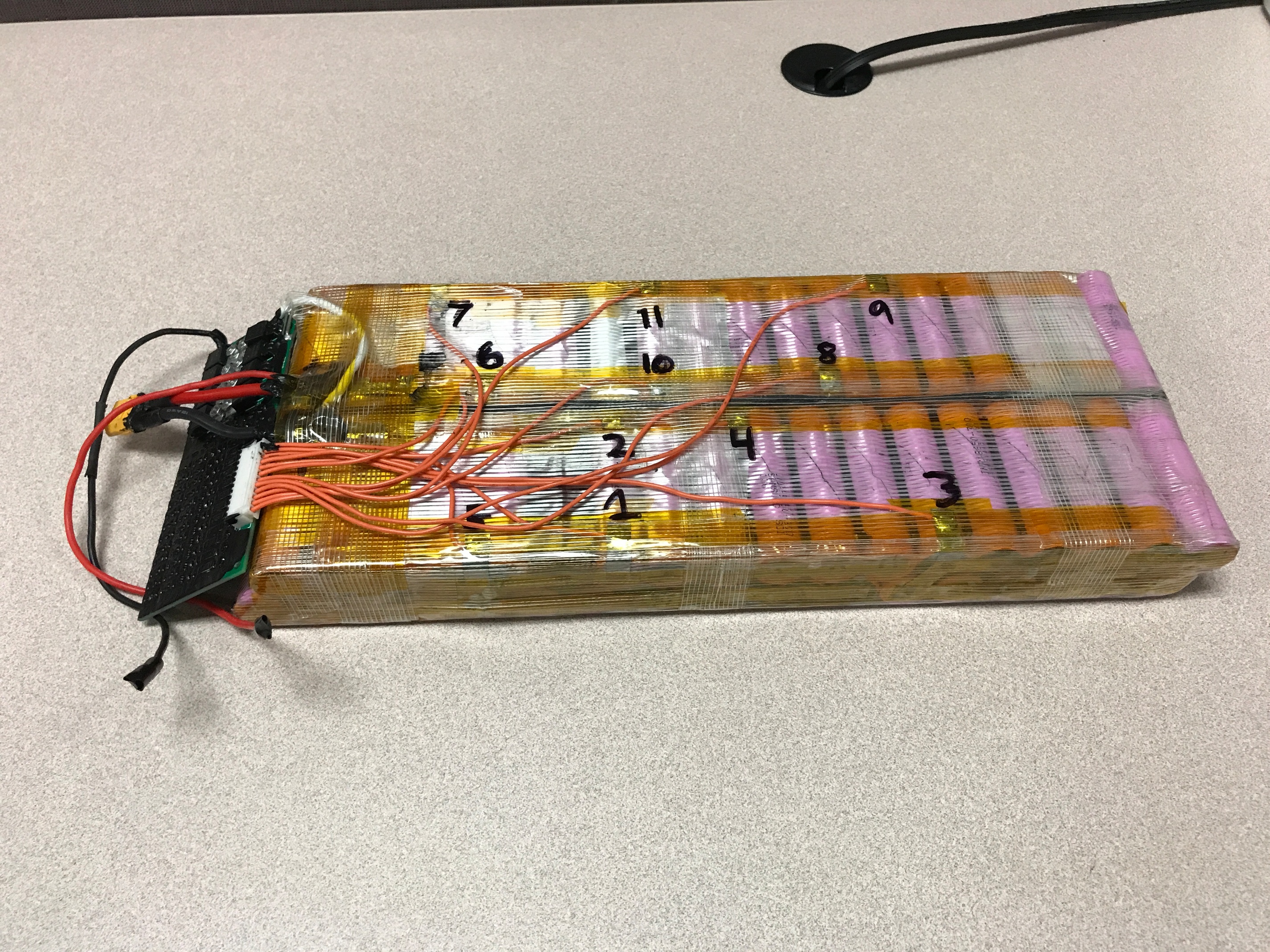 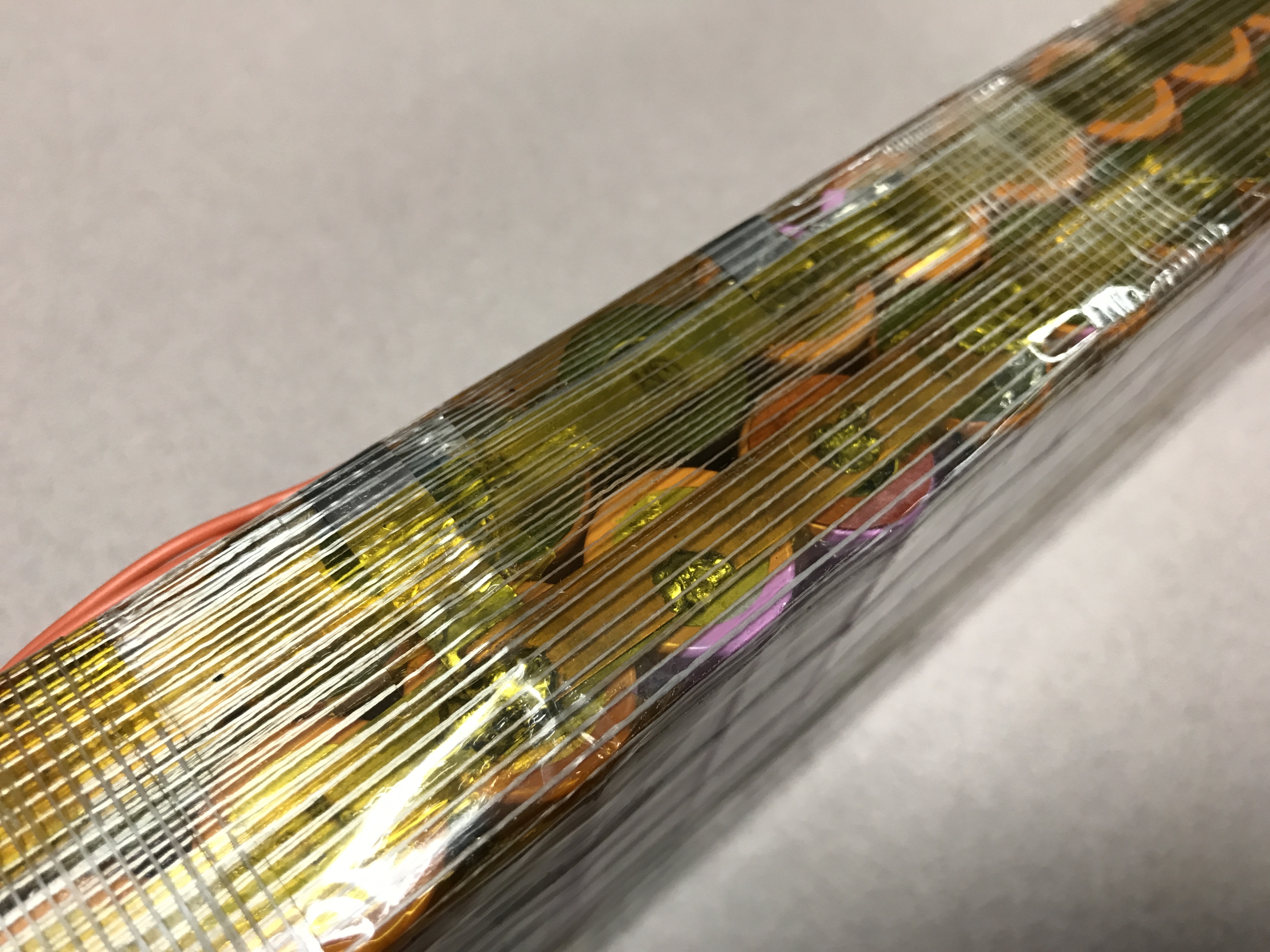 Man I almost bought this. Was talking to him about it for a few days. Sorry man. Hope things get worked out.

Is there anything we can do to people like this on the forum? like IP ban them or something cause someone like this shouldn’t be allowed to participate on the forum

No that would be vendor bashing. This post might not even stay up due to that. I just don’t see him as a vendor, just a kid who offers repairs here and there.

@willpark16 is just a 17 year old kid and will learn some growing pains for dealing with adults here on the forum I’m sure. It’s not like this will go unaccounted for. It’s kinda weird that he would sell @Mikenopolis a shitty battery in the first place though.

@Mikenopolis I do know that Bara fixes batteries pretty well. He does great work. Is it just the charging port that f$cked now? That’s an easy fix. But if the welds are loose and not correct it can be a nightmare. Get your refund bro. Hopefully it goes smoothly.

I’m not saying the battery is shitty, This now basically $300 12s6p battery would put a smile on someone’s face. I’m taking the $200 lost unless by some miracle Will responds and actually give me the refund now, it’s going just sit here for a while and be properly recycled/wasted because I can’t trust something that cooked my finger.

Definitely growing pains. My in-house council (and middle-aged skater that also likes my boards) has offered to represent me if I decide to take legal action…but even with his actions or lack there of, I forgive him due to his age and will not sue him in small claims. Is it really hard for someone to explain their inability of offer a refund? Did he think I was going to beat him with a bat? Some sort of communication would’ve been great.

I think you already know the answer to this one, we’ve probably all been there at some point @Mikenopolis - When you’re young and you make a $500 mistake you panic and bury your head in the hopes that it will blow over.

As an adult we can see the longer picture of reputation damage, pride and responsibility. I think you’re being a pretty big man here giving this youngster a break and a further chance. Almost as big as those squishy cheeks

I did some pretty stupid shit myself at 17. Nice of you to be willing to let it go but at the same time, there is some merit to teaching him a life lesson. the earlier the better.

hope it works out for you.

I just bought a welder from him. Took him two weeks to ship. I think he is just slow to respond/act in general

Not 17, but 15. dumb as bricks. I was at a friend’s house in the hills, I decided to play a game to see who can throw rocks into the pool of the house down the hill, let’s just say we both lost because the rocks missed the pool but got a few windows, I got into a lot of trouble, but guess what I was already working as a swim instructor at 13 and had enough money saved up to pay for the repair. Glad there was no esk8 or Amazon back then.

will owed me 450$ for motors and tires I sent him and he was a bit slow to pay me and did it in two parts and the last one was last week.
Did you put the black stuff on the bms and what is it? im guessing liquid electrical tape.

I don’t know what it is exactly… Some ports spark even though the plug fits. Someone on a group ride had a space cell with the same size connector as my battery from bara. Offered to let him use my charger as his is 10S3P and mine is 10S4P, plugged it in, it fit perfectly, but huge spark, yanked it out immediately. His charger works fine on it though, no spark.

Even though it may fit just right…

Well I’m not an electrical engineer, as long as my charger works for my battery, I won’t try to draw any conclusions based on assumption. Just a nugglet.

Nah. This is a major spark that literally disintegrated the center prong.

I did that to myself when I shorted the center pin to the outer edge with some pliers thinking the switch cut off everything… It was completely mangled. Regardless, I don’t see how plugging it into a charger could cause a short like that without some incompatibility between the charger and the charge port.

I have a feeling if you replaced the port with one you know is compatible with your charger, it would be fine.

Then again, can’t blame you for not trusting the thing at all based on its history.

The spark I had on my port half blinded me for a good hour or so.

I’m so sorry that has happened to you brother. You’ve been very forgiving, not sure I could be that adult about 500 bucks, but I commend you for it.

since it was a spark produced probably by the voltage of the complete pack the individual cells are probably all good. sounds like the switch was just wired backward or something

Dave said the spark wouldn’t have damaged anything. It’s a total lack of trust and paranoia on my part at this point.

The center port was bent from the two crashes I assume so I probably push it to the side just right to finally break it off.

I’m a forgiving person by nature. My anger is either full rage or this. People know that when I’m pisses it’s serious. This is one of those things I just wanna smack him on the back of the head and say “seriously?! Grow up!" His age and inexperience in life, morals and values is why I’m not really angry. Just disappointed. You know what would be great? If @willpark16 responded here and we can discuss a 5 month refund plan.

Hey @willpark16 of all the people you could shaft you chose one of the nicest most active members? But maybe you got lucky because he’s so nice.

In case you hadnt thought it through you can patch this up with Mike really easy. You’ll be able to look yourself in the mirror.

If you just ignore him, you get to keep $500 but you lose all your friends here and this hobby will no longer be the thing you think about all the time.

It’s all up to you. The money is nothing in the long run.

If you…and @barajabali is up for it (or any potential takers). I can send this to Bara for an inspection and then you can pay me the $325. Then pay @barajabali for his time and shipping to you. So in the end, slightly more but probably less than my lost.

This does not include you Will. If you respond to purchase this I expect $500!