Soldered bullet connectors on to VESC... what could possibly go wrong? :)

So I was struggling to get the phase wires out of my enclosure and I saw a post somewhere where someone had soldered the bullet connectors straight to the VESC phase outputs.

The 90 degree configuration would suit my enclosure “form factor” so I thought I would give it a go as well. 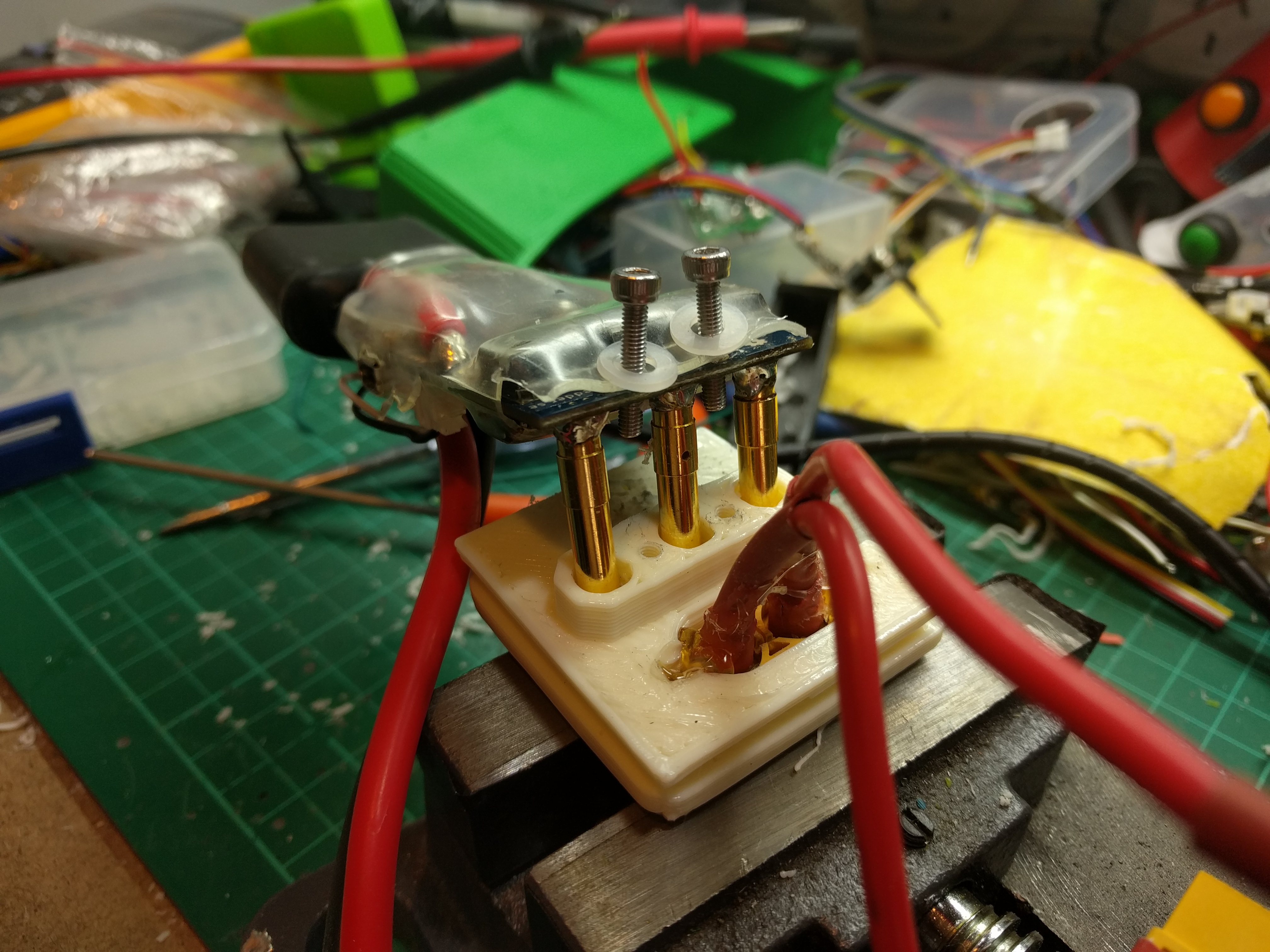 I understand that there is a bit of mechanical strain on the soldered bullets in this arrangement so I am screwing the board down at a very similar point/plane. 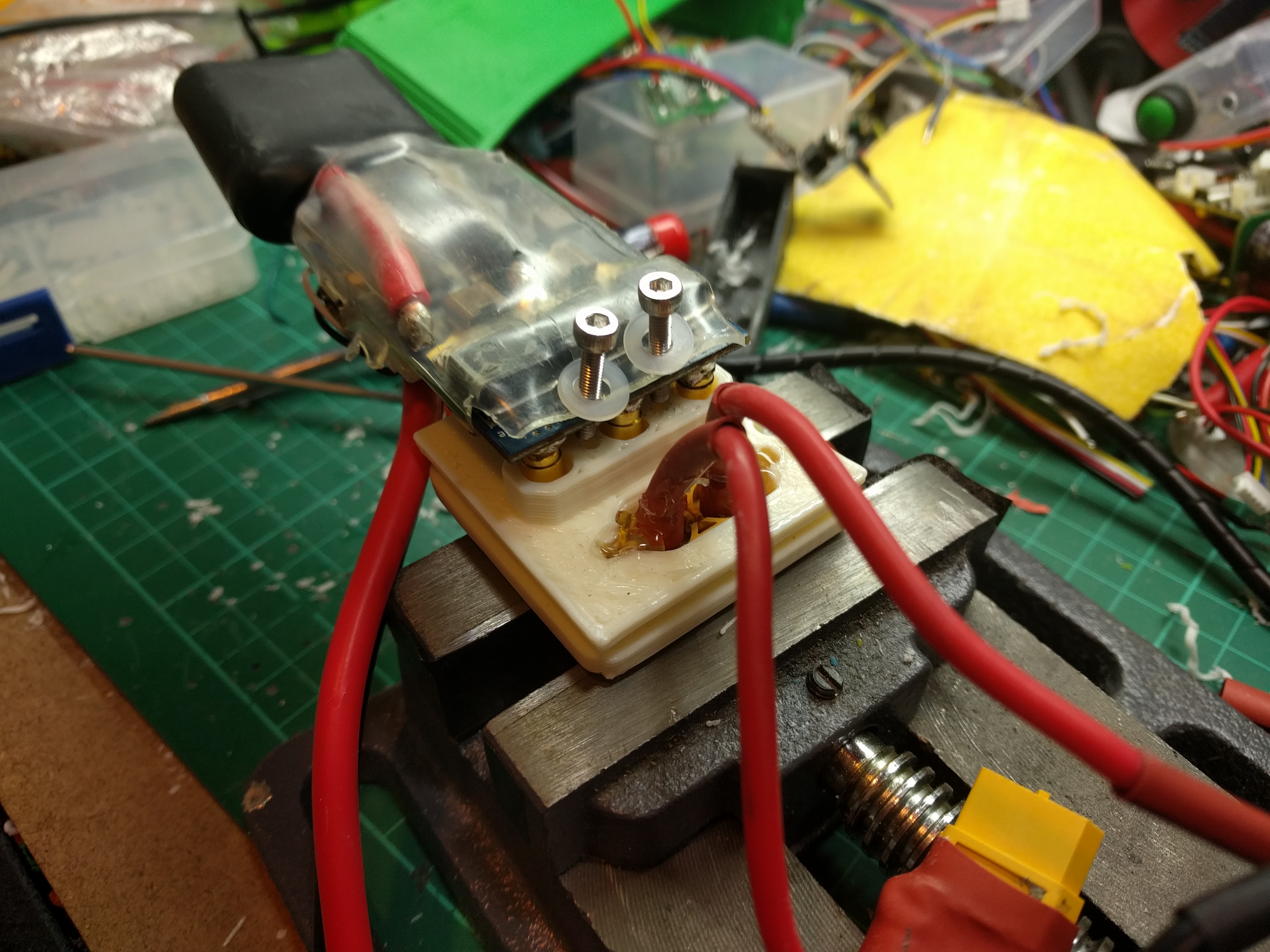 My only real concern is the amount of heat in those FETs, but after a quick Google (after I implemented the design and did a test-ride of course) it seems that the nylon washers are good to about 220 degrees C (sustained). 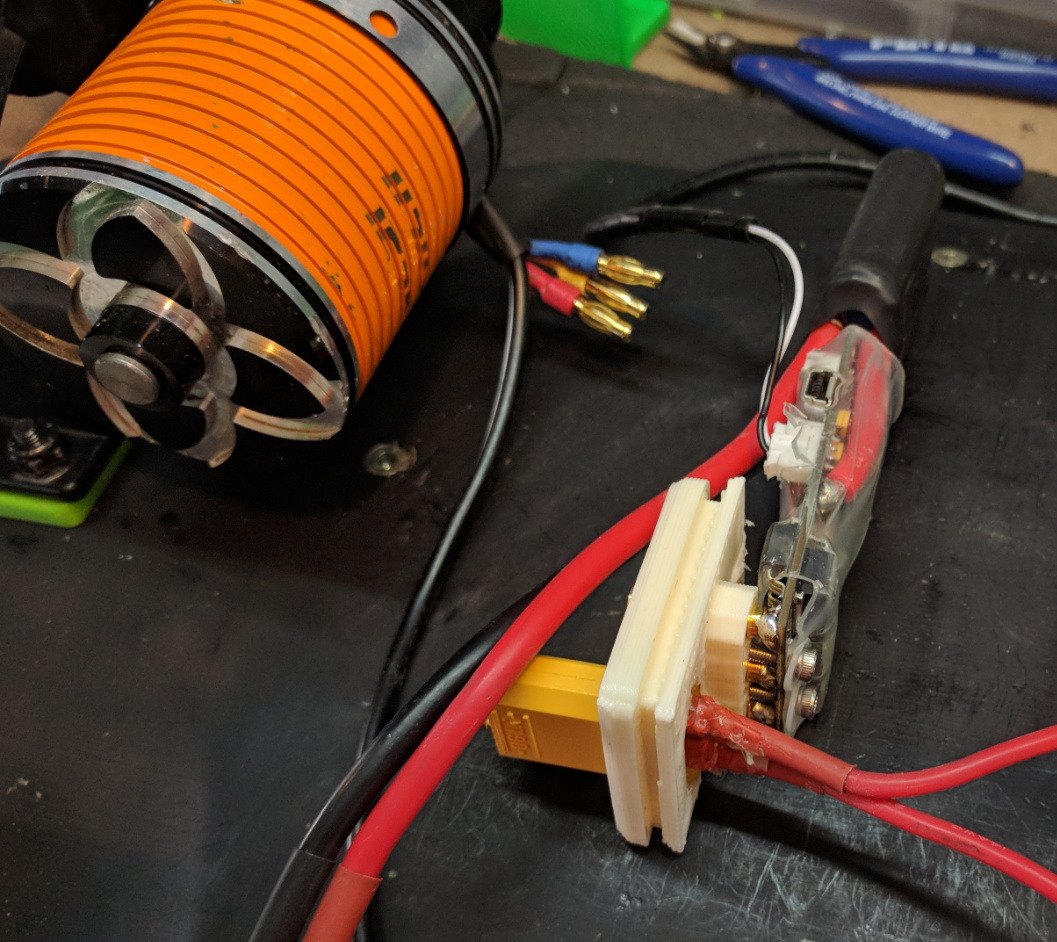 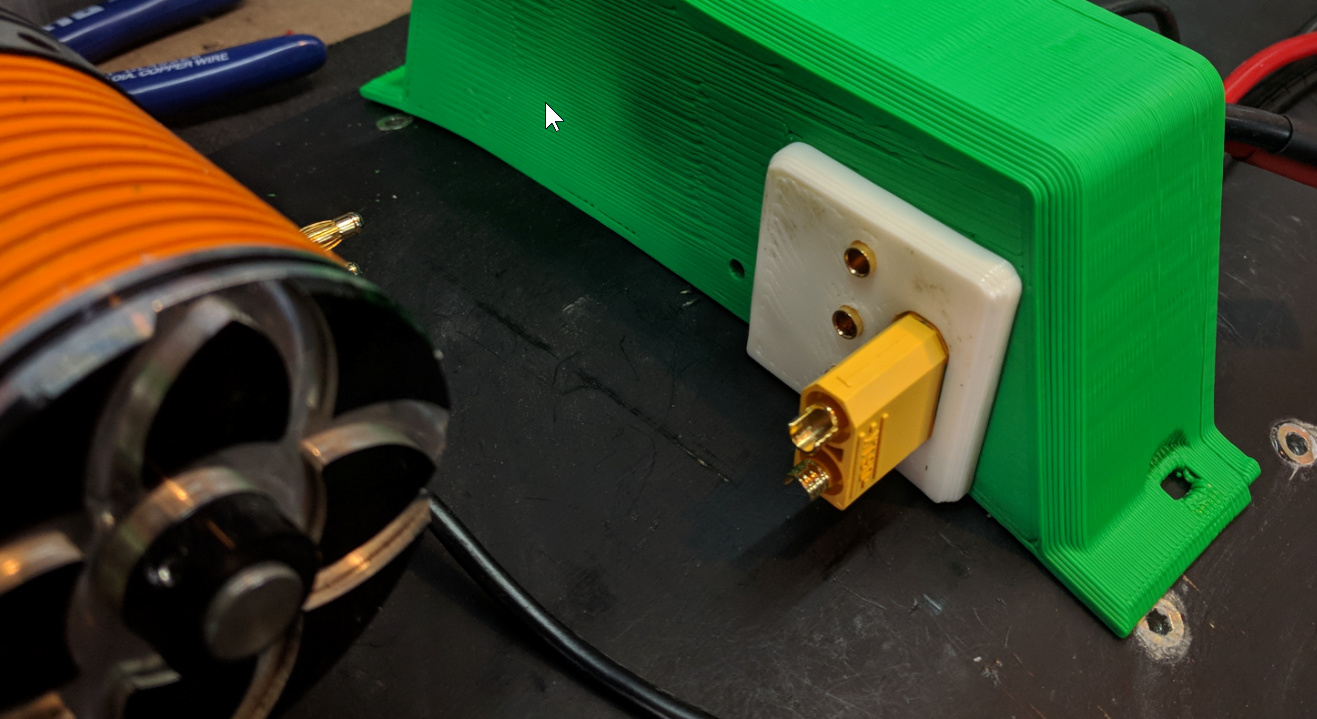 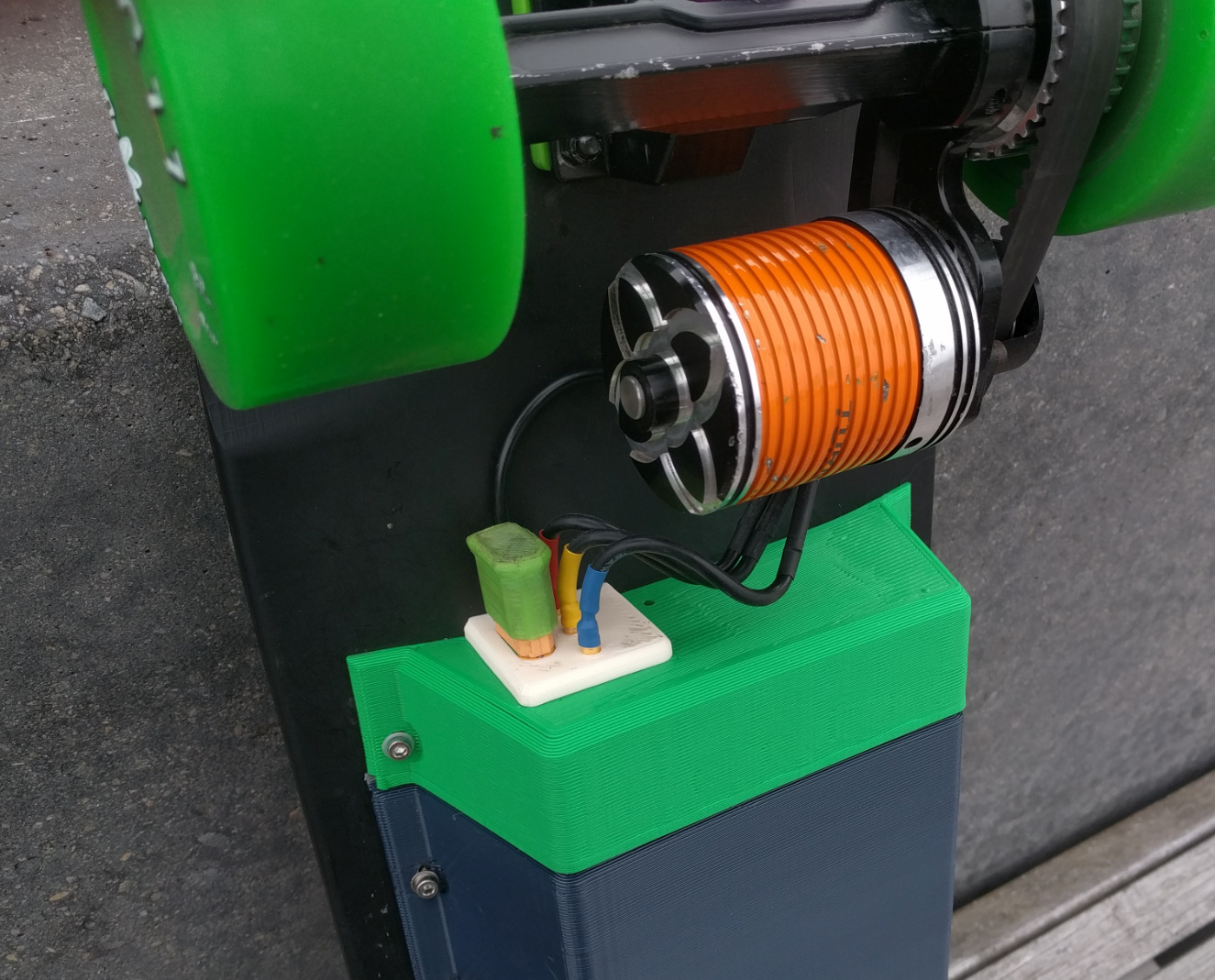 The reason I made this “slide in insert” was so I could remove the end enclosure (the green bit) while leaving the electronics intact. Maybe a huge waste of time, but I love designing (hopefully) elegant solutions (I’m a software developer).

Next steps (other than making the other end work the same way): a) get some fibre/temperature-appropriate washers to replace the nylon ones. b) secure the other end of the VESC better.

This looks like it may have trouble dealing with heavy vibrations. At a minimum I would use silicone and cable ties to make it one with that side wall – silicone between it and the wall, then a few days later after it cures, use cable ties to torque that onto the green side. (You’d have to make a couple holes in it to feed the cable ties through) You do NOT want those 90 degree bullet connectors flexing under vibration.

But I don’t know, those are just my thoughts for what they’re worth

Fair advice.You’re right. I’m keeping an eye on it. Thinking out at least packing out the big-ass capacitor end of the VESC to stop it from acting like a lever.

Might design a cable-tie mount into to the next iteration of the green (and red) part of the enclosure.

So FWIW I thought I would document this.

I liked the idea of the banana connectors for the phase wires to be more secure/more modular so I quickly printed this arrangement. 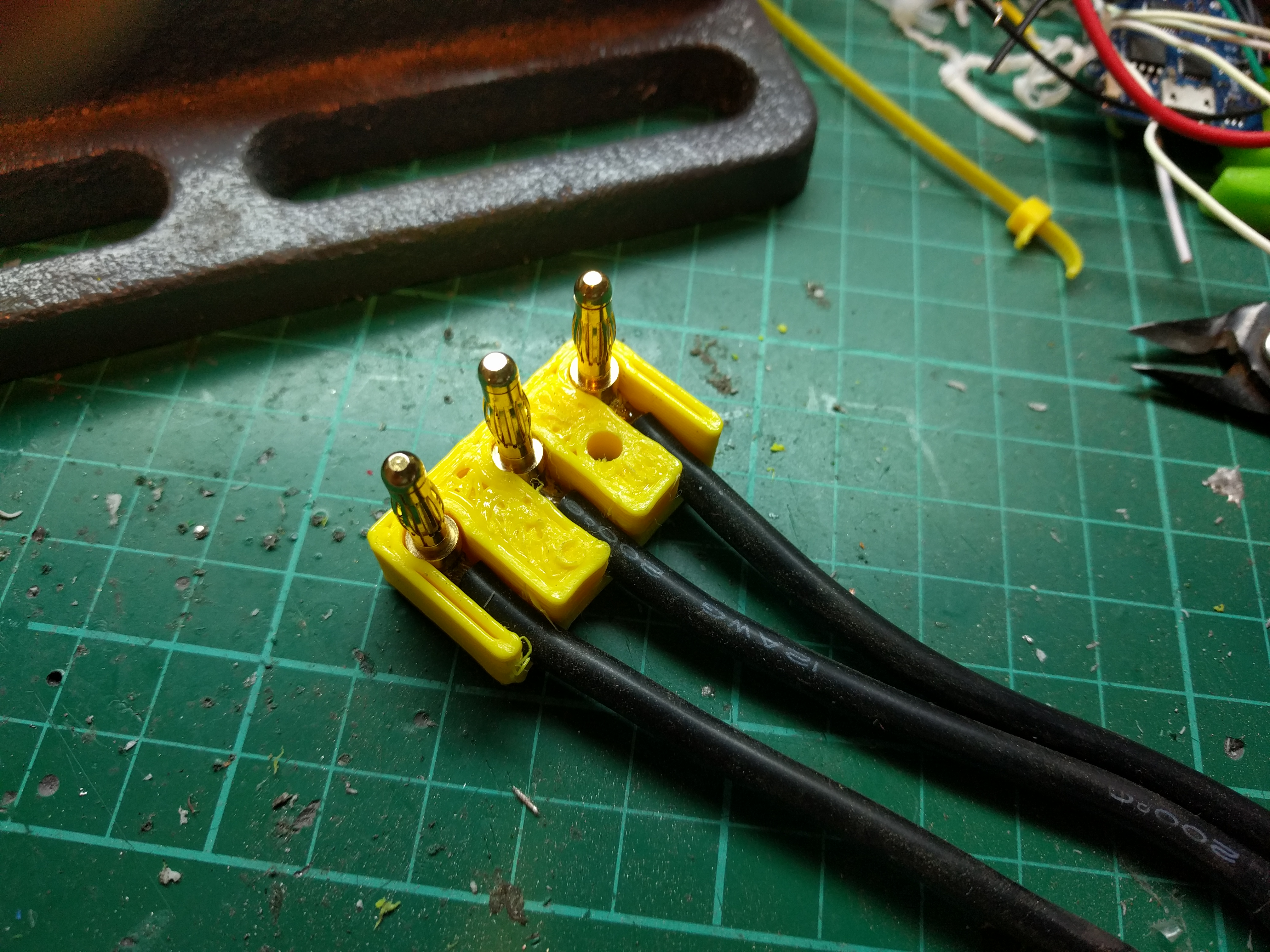 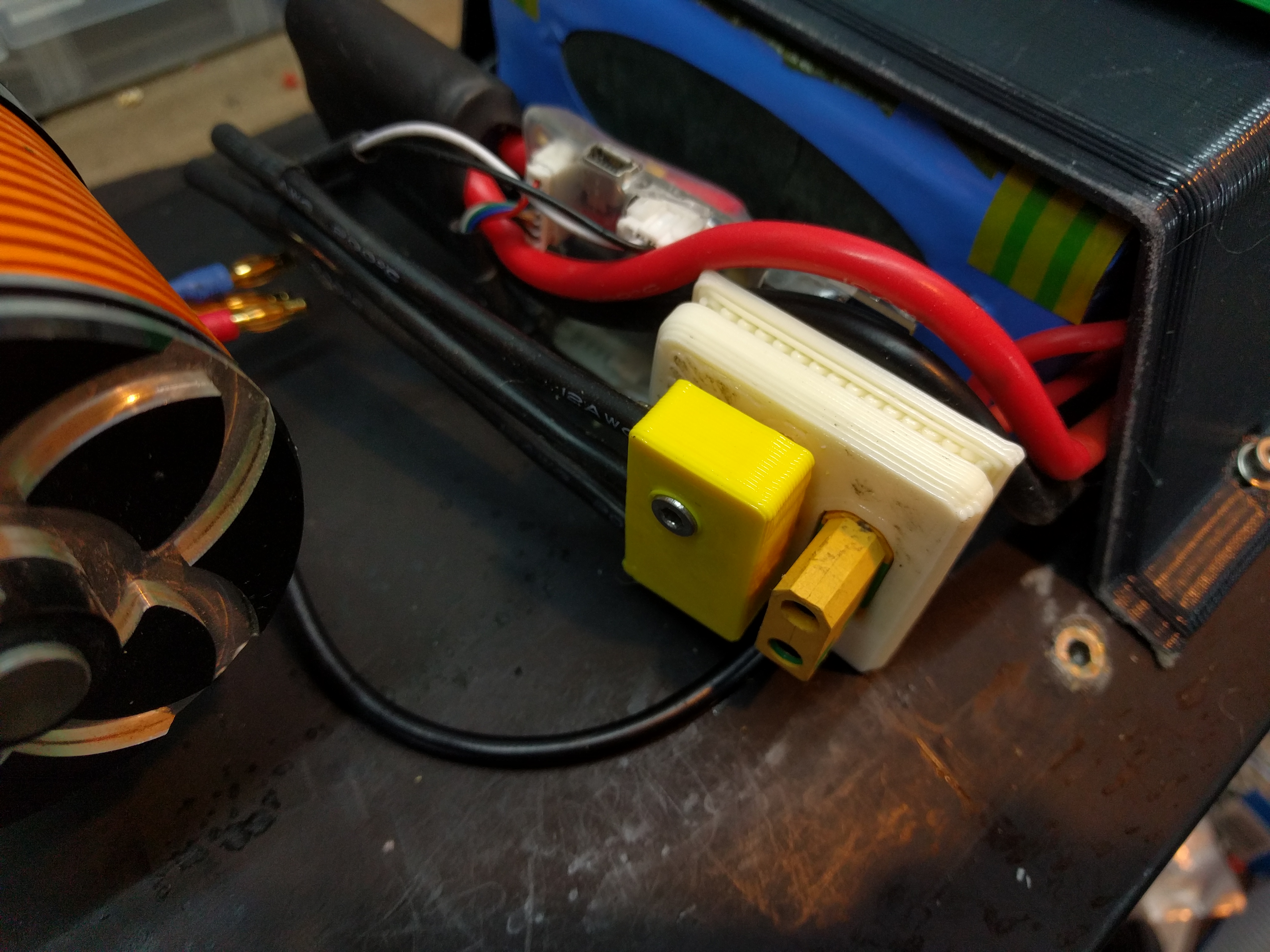 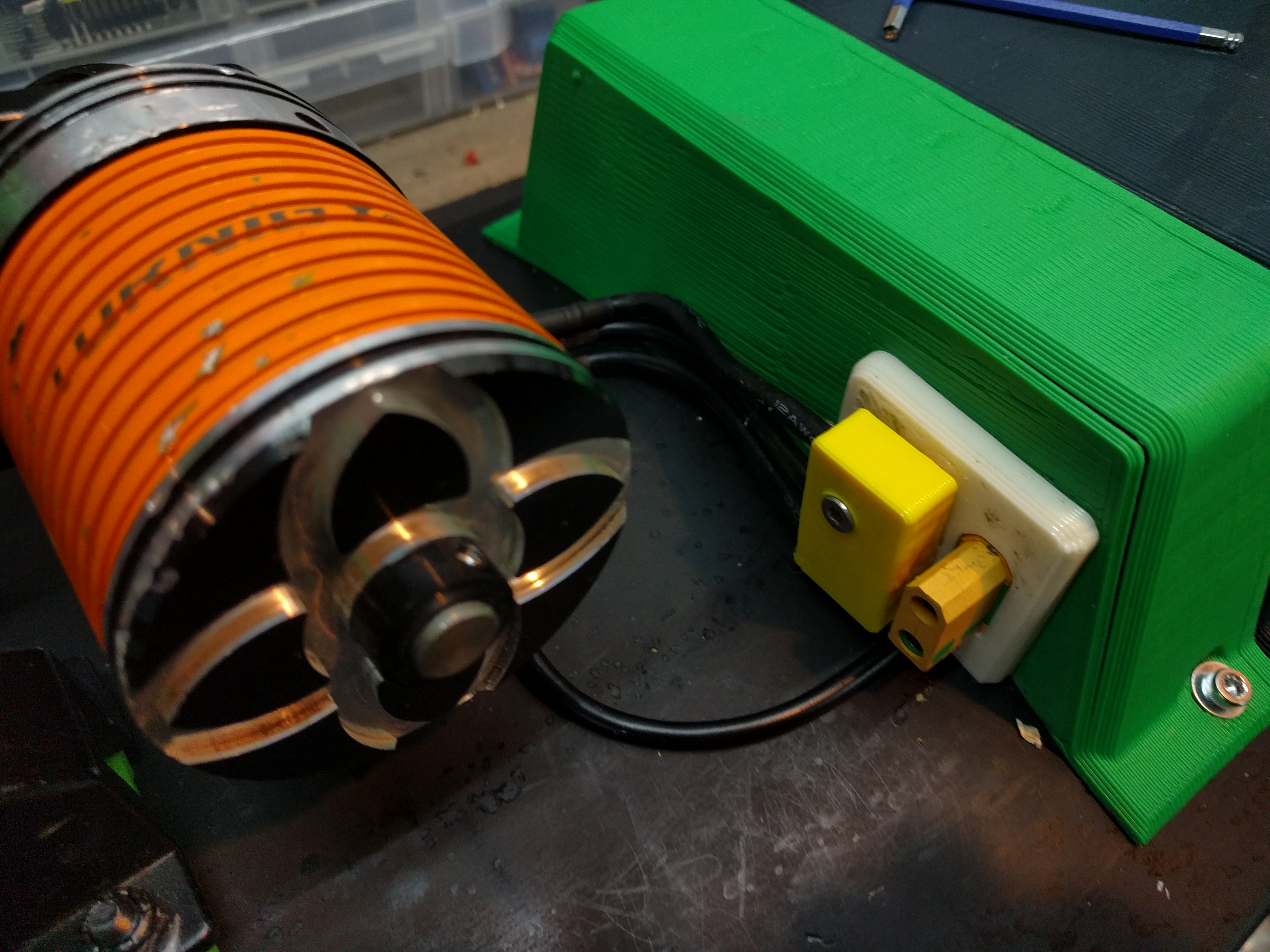 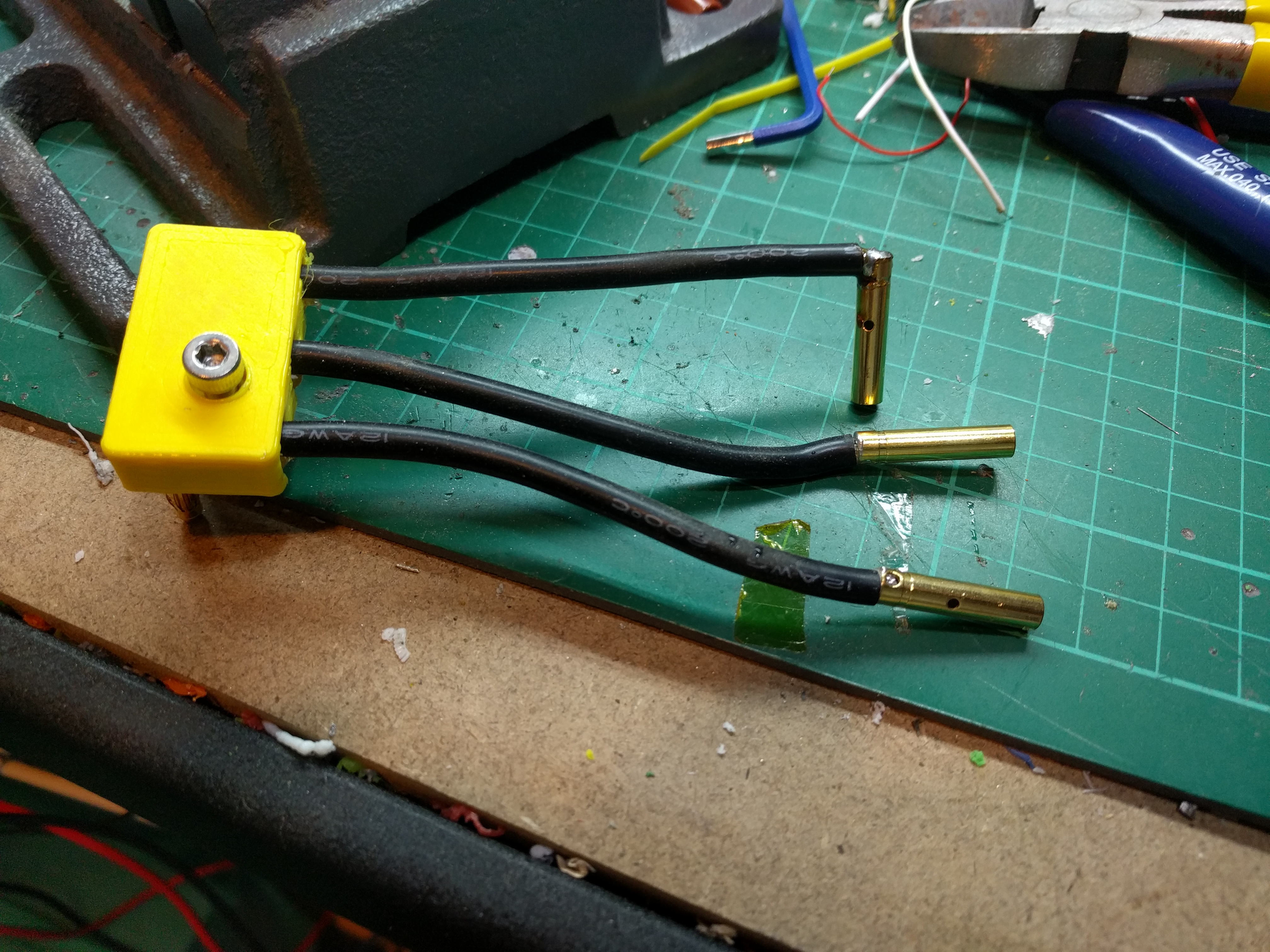 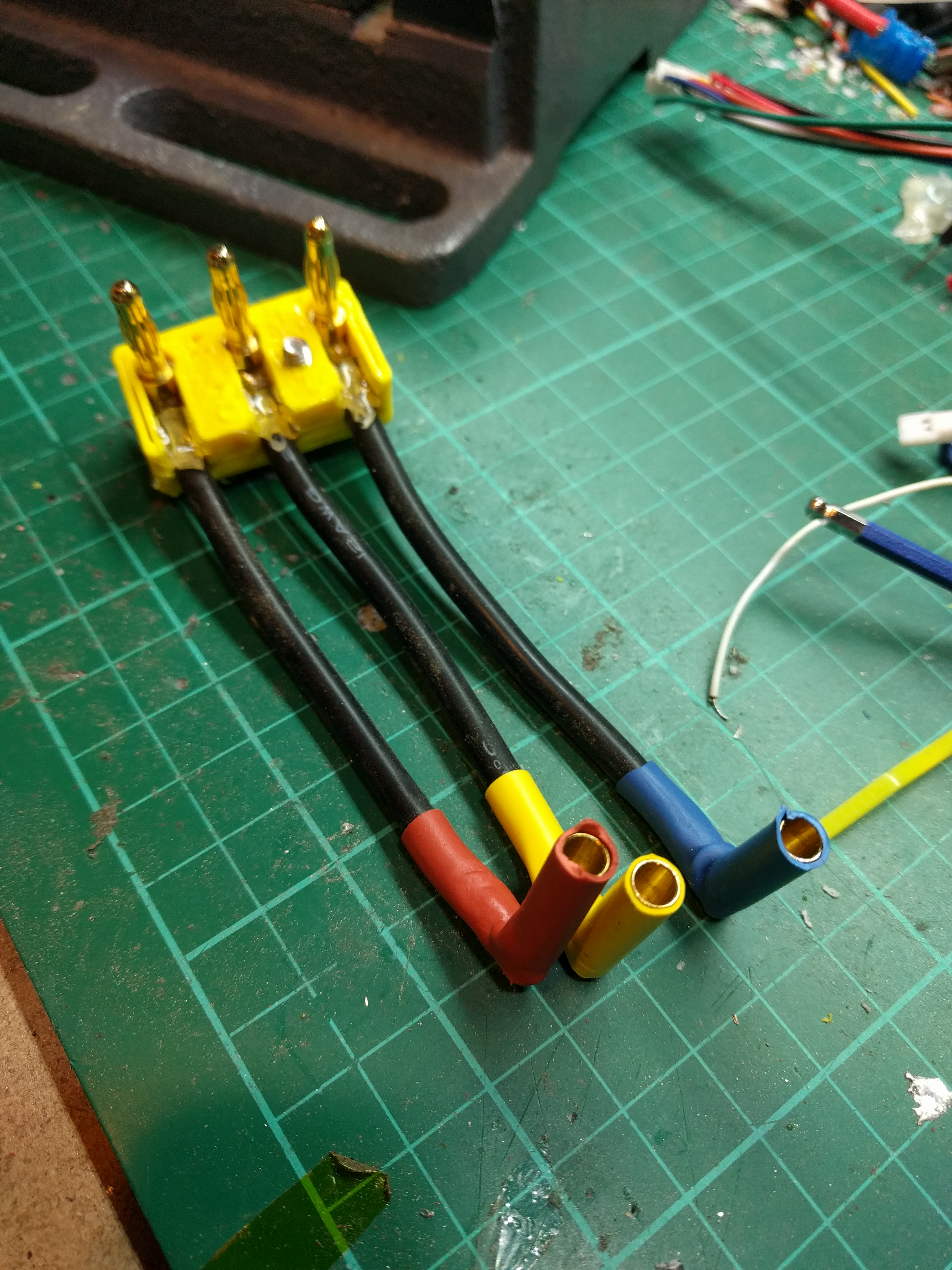 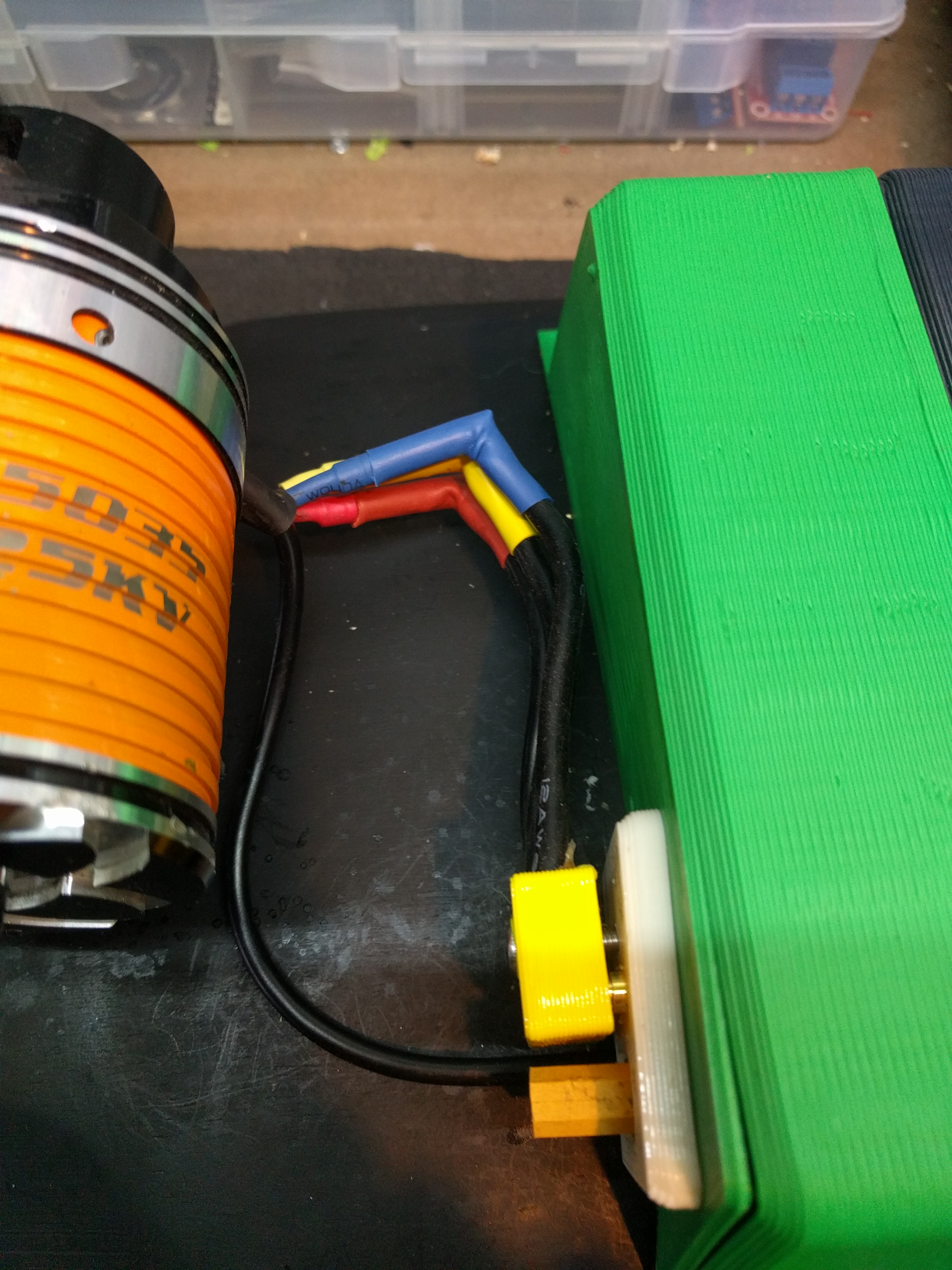 OMG that gap in the phase connector (yellow-white connection)!

It looks like you got some underextrusion and delamination there. What kind of printer do you have? Have you calibrated your e-steps?

Heavily modified Tevo Tarantula. Despite the calibrated e-steps it will be the 0.8mm nozzle (Volcano hotend). I’m fine with it. Once I get my V6 0.4mm nozzle on there I will be redoing. Prototyping at the moment.

Nice, 0.8, the layers do look thicc! I bet that prints fast, I probably should up to 0.6mm at some point.

Love printing big/fast when prototyping. Lots to learn when going big though.

(btw - that gap in the green part is because my chamfer is too aggressive and it’s a crack. Sorted in v77 that I printed later).