Some questions to build a EMTB (motors, vesc)

1- i’ve two 300kv maytech motors from scramboards, something that worries me is the length of cables, the large ones are from the motor, and the short one is the sensor lead, this is safe? 2- if i want to build a all terrain board, should i use the sensor lead? there is any advantage than running the motor as sensorless?

3- it’s possible to connect the sensor lead to the Enertion’s VESC? 5- all the EMTB boards I’ve seen, are using two boxes one for the 2 ESCs and another for the batteries, if my motor cables are so large i can use only one box in the middle of the board? if this is a bad idea why? 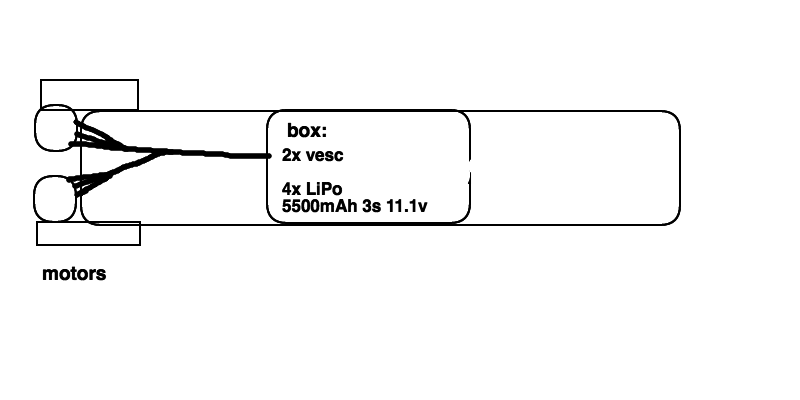 the full boards from scramboards looks like they use two 300kv motors and two VESC https://www.scramboards.com/es-scram-board-2wd.html

Though, you should check how much vesc is compatible with that kv rating and your voltage… might hit that erpm limit everyone is talking about

Wait… so how many kilometers can u do with emtb? 4km versus 30km sounds terrible… maybe you made a typo… 14km might seem ok (even good) with 8000mah battery

Unless u ride really fast and consume 40wh

@tueboard what are your battery cutoff start and end? Because 10 times less range doesn’t make sense.

@Okami @Ackmaniac lamentably, is not a typo

here is the config of each VESC, do you see anything bad? maybe the reason is that i’m using two 300kv motors on eMTB and just a single 190kv motor on streetboard ?

thanks all for your comments!

300kv with which gearing and wheel size.

4km range is ridiculously low. Your low voltage cuttoff seems high. How much do you charge your lipos?

what cutoff do you recommend me?

i charge the lipos upto 4.19 each cell

thank you, maybe i will get some sk3

Normally for Lipos i would recommend 3,6v cutoff start and 3,4V cutof end. But i think 3,5 and 3,3 is also fine. Depends a bit on the Lipos and once you realize the VESC reduces the power because of those limits you should try to stop your ride. With Li-Ion you can continue longer because lipos kind of collapse if you discharge them too low.

I have those motors from scramboards. They were included in a complete MTB from scramboards. I used 2 vescs from Flier ESC in china. They come with heatsink. Worked good once I got them configured. A little slow on take off, but scary fast (to me anyway) once you get beyond 20mph. When it was up to 26mph, the motors still had quite a bit of punch. That was faster than I wanted to go.

Cables being that long doesn’t seem to be an issue. I am using one box in the middle with battery and ESC in the same box. I think if I was going to build a new E-MTB, I would go for two separate boxes. I would feel more comfortable having the battery separate from the ESC’s. Just from seeing that video of “jens?” torturing his board and the esc caught fire, but it was separate from the battery.

I got about 35 miles in that configuration. Then one day I was going to do an errand and one of my wheels wouldn’t spin. I had a failure on one of the vescs. Motors are still strong, but, using a 10s battery and 300KV motor, it eventually killed the vesc. The vesc no longer responds. Can’t read the logs or anything.

I have removed the last vesc and replaced with a dual ESC. Flier ESC sent me a replacement VESC with little question. Doesn’t seem like there are any issues with high KV motors with the dual ESC. It runs the motors pretty strong. Much stronger acceleration than the vesc. Brakes are literally killer. Like, they will lock up if you barely touch the trigger in the default config. I have toned them down, but haven’t had much time to get a feel for the new esc. Just rode it for 15 minutes today to test the configuration.