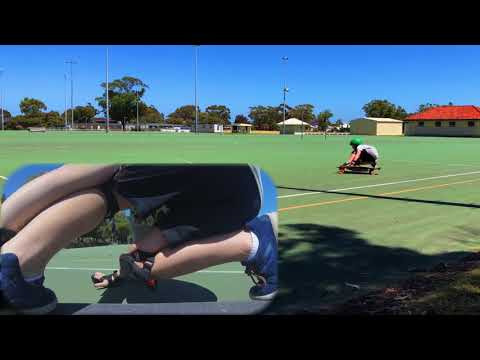 Been playing about with surf trucks on a esk8 for awhile, my son loves them as well, Carver trucks (copies and modified) and smoothstar trucks. Bought a Verreal f1 while deciding what I wanted from a esk8 before I start a proper build. Love the carving feeling from surf trucks but not sure what motor setup to go with. I do want quality urethane as I cant slide with the hub motors, might just be me but cant be good for them Im guessing. So either a single belt setup as top speed isn’t needed or id prefer a stealth not so loud setup as in direct drive like Carvon or the like . So after ideas if anyone can share. Also think i might have to make a board with big wheel arches so as to run bigger wheels than the 60mm ones, probably 90mm ,smoothstar trucks are loosey goosey. Though Im also thinking smaller wheels, 60 or 70mm so I can use the smoothstar wheels up front, though clearance and fitting is probably problematic on a direct drive ? I did board swap the Verreal with the 36" Smoothstar, 90mm front and back, pretty fun but wheelbite scary. Any reason not to build a board from fibreglass ? researching now Oh, and G’day from Aus

I recognise that court. Are you in brissy?

Must be the same design mate

in Fremantle w.a. Fun and safe spot to practice, wish all roads were as smooth.

Why don’t you wait for the tb directs. Pre orders are now. He delivers though so might be a wait but they will arrive within months not years. As for using smoothstars on an esk8 then stick to hubs because you do not want to be doing 40 kmh on those.
As a starting point you could just upgrade the verreal with a unity. Give you some more control and some power increases if you are not too worried about range. All I will say is if you are going to run surf trucks then torque over speed. Welcome to the forum my friend and good luck

Thought I’d wait for feedback from the TB motors. As for smoothstar trucks I’m feeling my modified carver c7’s are a better fit for esk8s, though I’m looking at the cx and cv range, and also the gullwings. The verreal hits 40km and is a good board to get accustomed to esk8ing and gives me ideas of what I’m after in the future, not so much after a top speed demon but something that can keep the speed uphill, verreal slows down a bit but still fun to carve uphill. Unity is a good idea though I’m already wanting more range than 20km. Decided I need 2 boards, a longer range board that isn’t slowed down too much going uphill and a carver type board with proper wheels for lower speed surfing, sliding. Cheers for the reply and welcome

I was going to say grab some double kings for carving. If you want a torquey slidy board then look at the evolves and work out how to make them better. Pair of 63mm motors and a decent 10s4p 30q battery will pull you up any hill and give you the low down power for slides. Not so great above 40kmh though. Well they are but you have to have the trucks too tight which defeats the object. Personally I love how the evolve boards ride for cruising but they are not great out of the box with regard to battery life etc. Great tuning platform though. Oh the possibilities…

Thanks Dareno, Bit confused on the evolve boards. Chat to dudes with them and they love them, but see so many posts of disconnection, broken trucks and replace battery as soon as you buy. Will have to do a bit more research, Cheers

Evolve fails at the quality control and value for money levels. Basically the trucks, deck and grip tape are great. That should scare you.

The esc, battery, remote connection, motors, belts and basically everything else is as cheap as possible.

Sometimes someone will get an evolve board that just works and goes. Most of the time though those boards end up back in the factory for repair within weeks. Mine developed 5 separate issues before I decided to return it, that’s when evolve showed their colours. They wanted me to pay a £700 restocking fee on a £1400 board that had managed to do 18 miles between failures. It was insane.

4 months and a credit card claim later I got a full refund.

I’d avoid evolve at all costs personally because of the experience I had. But others might argue.

No I’m not advocating you go and drop $2000 on one just use the idea for inspiration for your build. Hell no. What I was trying to say is they are a nice carvy ride. The only evolve I would spend money on is a second hand one that was completely crapped out then upgrade all the electronics. Hard to find cheap enough to warrant it though. Point is the dkp trucks and the drop through deck combination should tick all your riding boxes.

Damn, you stalking me moone

No I’m not advocating you go and drop $2000 on one just use the idea for inspiration for your build. Hell no. What I was trying to say is they are a nice carvy ride.

yea i got the gist of what you were saying mate

Point is the dkp trucks and the drop through deck combination should tick all your riding boxes.

ta mate, now time for more researching. I really like the idea of being as low to the tarmac as possible without bottoming out. Cut out part of the deck where the battery enclosure goes and mount flush with the deck to keep low, but lose board strength or build/buy a flat pack battery. blahdeblah

Look at the hummie deck.