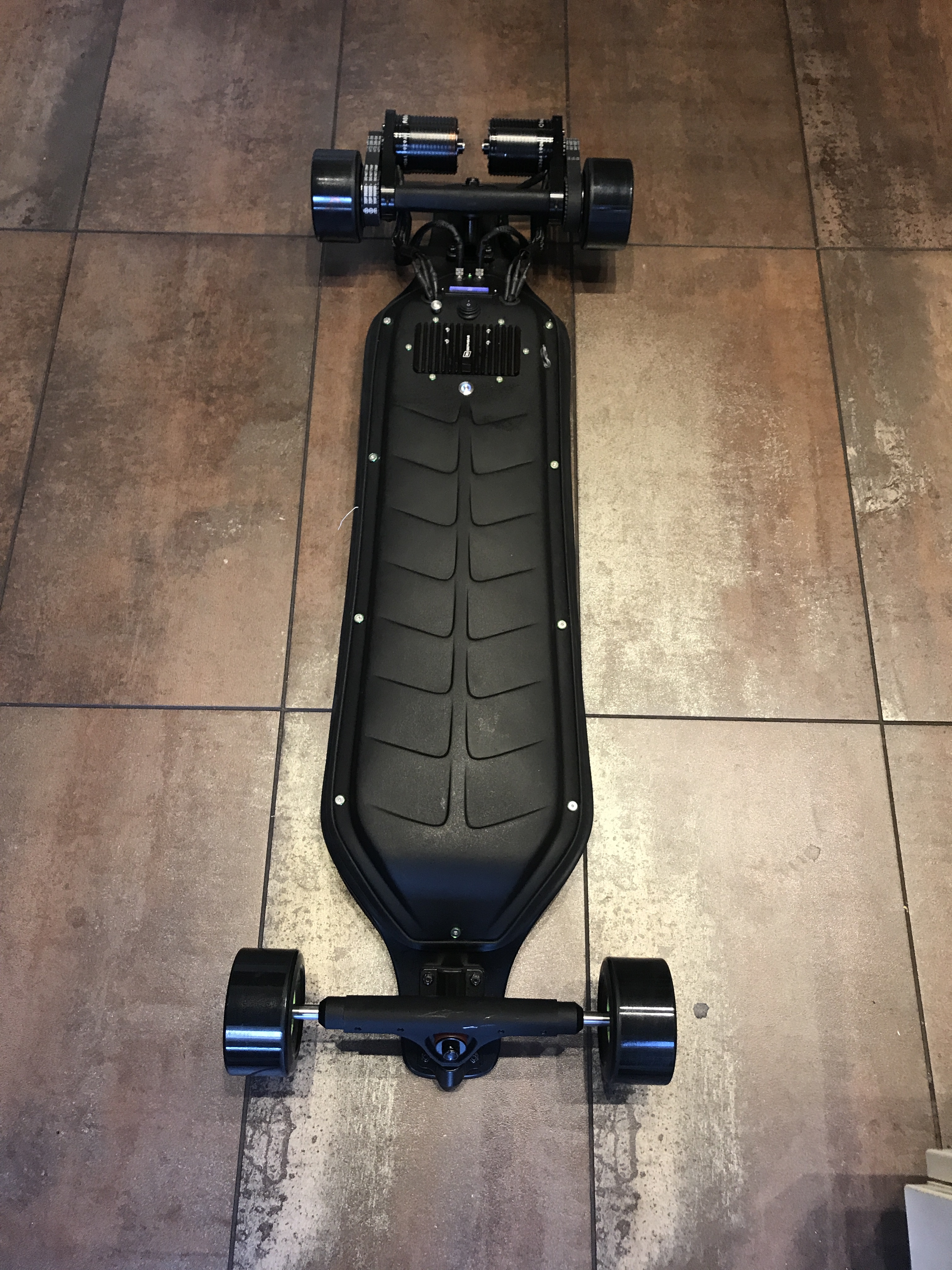 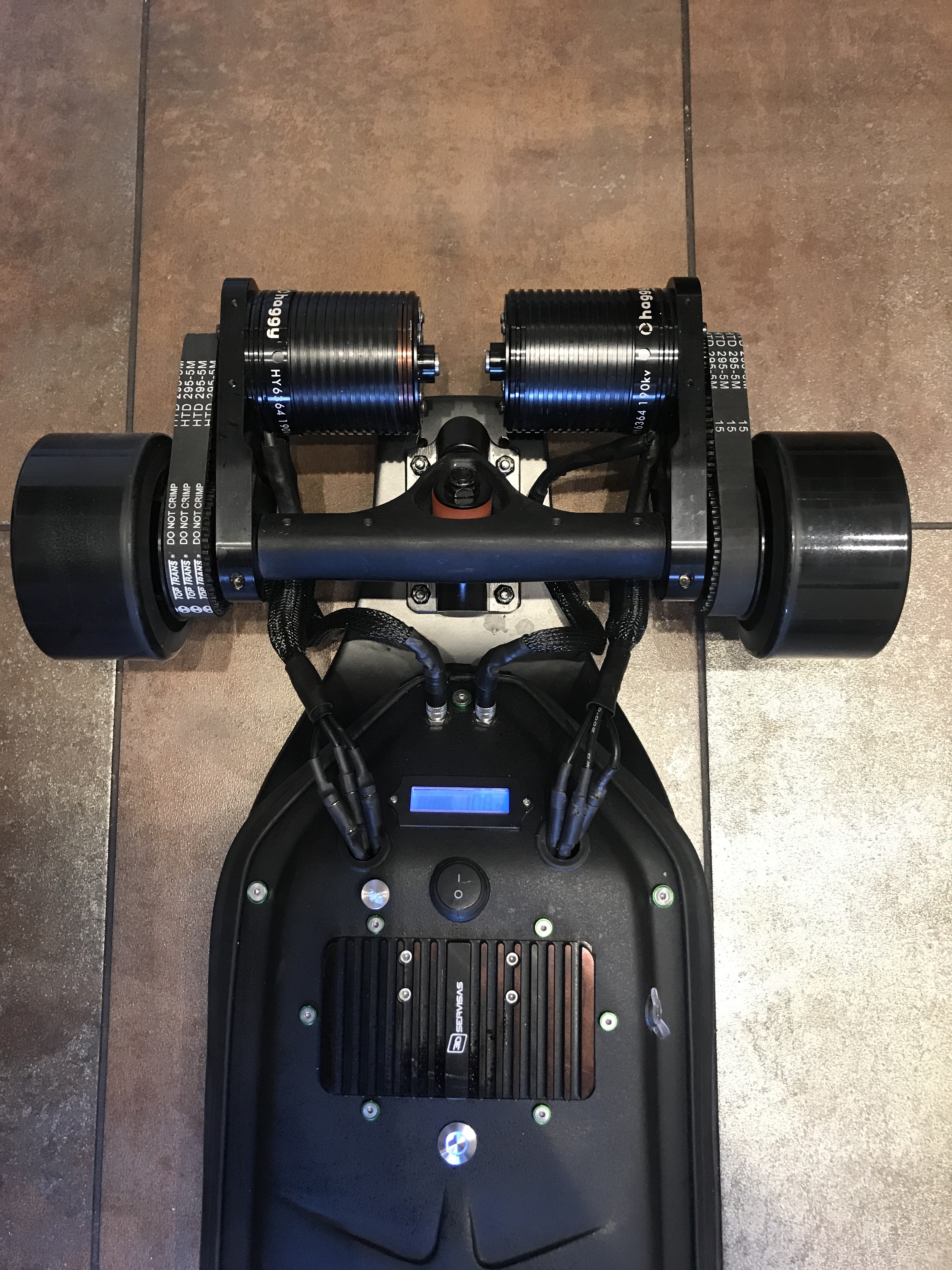 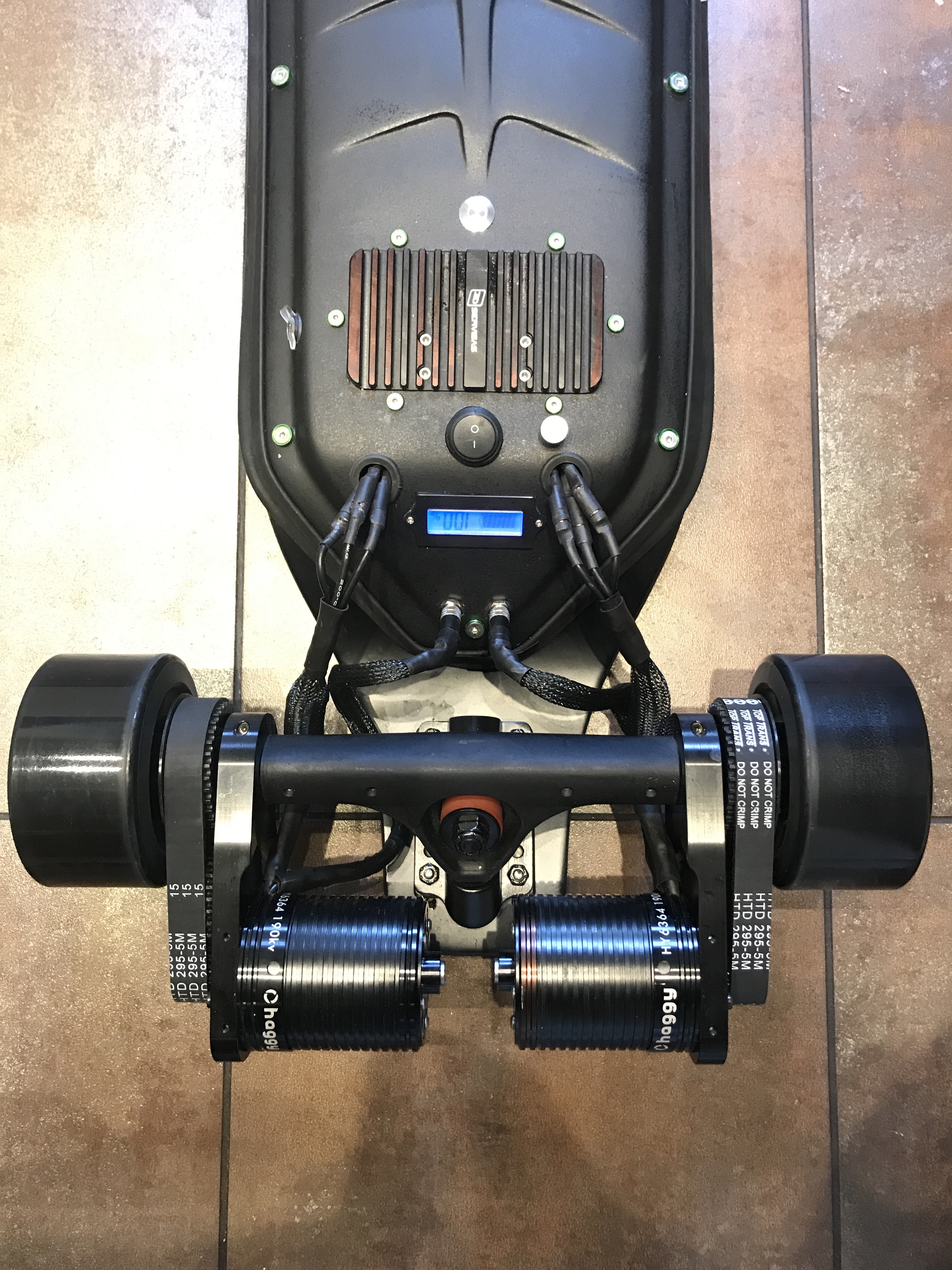 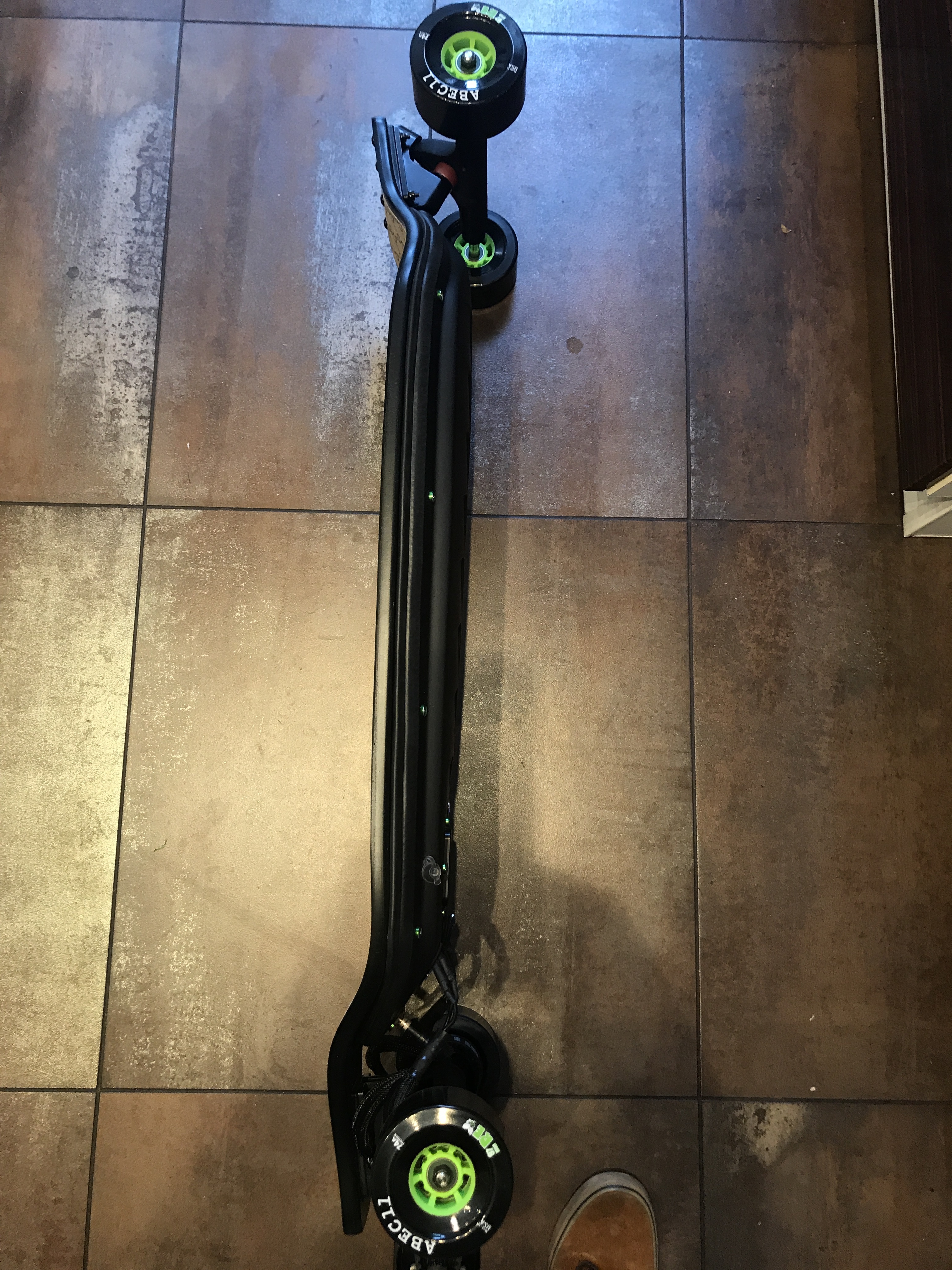 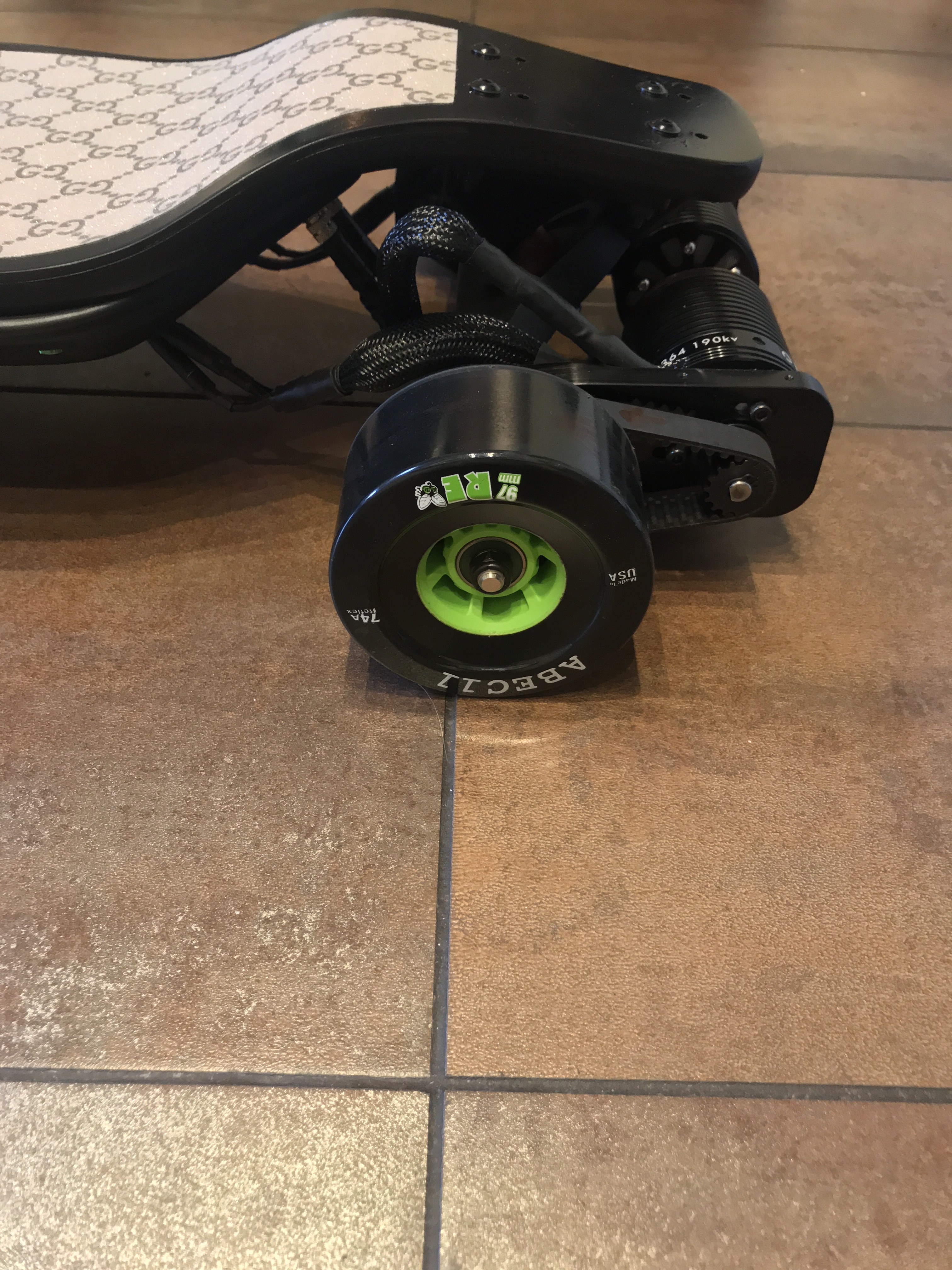 Samsung 12s 5 Entity , haggy motors and truck combo , abec 11fly wheels, landyyachtz evo deck , eboards peru enclosure and maytech v2 remote all bought online from all over the world and delivered to the uk without a single problem Thanks to you all And the biggest thanks to Timo from haggy! What a fantastic fella nothing was too much trouble and his help was amazing

Great work man, think I saw this on FB as well.

She’s a beast, that haggy kit looks built for the evo.

If you’re taking constructive criticism that could help headaches:

The angle of those phase wires is worrying to me personally. Your bullets are obviously on the outside of the enclosure there and pointing down rigid. I could see them easily snagging on a curb or obstical and pulling out, wearing through and shorting on each other or just generally getting damaged.

This build is begging for some 110’s, like Roman mentioned!

Where abouts are you in the UK?

Only thing, I’d point those motors up a bit, you’ll definitely scrape it along the ground.

Haggy mounts are adjustable. They clamp over the rounded end of the hanger and can be positioned pretty easily.

The angle of those phase wires is worrying to me personally. Your bullets are obviously on the outside of the enclosure there and pointing down rigid. I could see them easily snagging on a curb or obstical and pulling out, wearing through and shorting on each other or just generally getting damaged.

Totally agree with this. Very nice build tho. Clean.

Congrats and thanks a million for the support!

It came out really clean. Question which angles you use front and rear trucks?

Angles? Not sure what you mean

Shut up, this is your first build?! Hats off to you, I have nothing nearly as coherent from scratch, even now.

What @rey8801 is asking is if you had to use angled risers or what angle the truck baseplates are. Haggy’s are 50’ and with reverse mount motors you can keep the standard degrees that the evo was designed for. Trust me its much better the way you have yours set up as the deck will work as intended and remain stable at high speed and that thing is capable of high speed. I would be grateful if you can share some insight on the handling after a few set up rides so I can get an idea of how the haggy trucks work on the deck.

Thanks for the information, sure I’ll keep you posted on the performance although I’ve nothing really to compare it to apart from a mellow

It really is my first build, I just asked loads of questions on the forums and probably drove everyone mad then I took the plunge and ordered the haggy dual setup from Timo and the support and service I got from him was absolutely fantastic it gave me the confidence to go forward and order the other parts which he recommended and the only thing I had to do was some soldering and some drilling and routing out of the enclosure for the heatsink, I struggled with getting the enclosure seal right it took 3 failed online purchases before I got one that fit the only mistake I made was the on off battery switch is exposed but I’m gonna fit a removable cap to cover it, I’d say the hardest thing was doing the setting up of the unity but only because I’ve no idea with a windows computer

what @dareno said. Basically EVO has asymmetrical front and rear angles and that’s why I was wondering which angled raised did you end up using. Just out of curiosity since that is one of the reason why I am making the Hammock adjustable base plate. Anyhow sick build and as first one I think you have pretty much reached the top notch already. Well done!