This is my second electric skateboard build. The first one was a cruiser-style 6s E-skate which had its problems but oh my god I loved it. Too bad I left it in a bus in a rush to the subway… Someone nicked the board and it was never ever found again.

I didn’t ever make a build thread for the old board but I have a video of it in YouTube, (please like and subscribe so you’ll also see the video of the new board in the future) 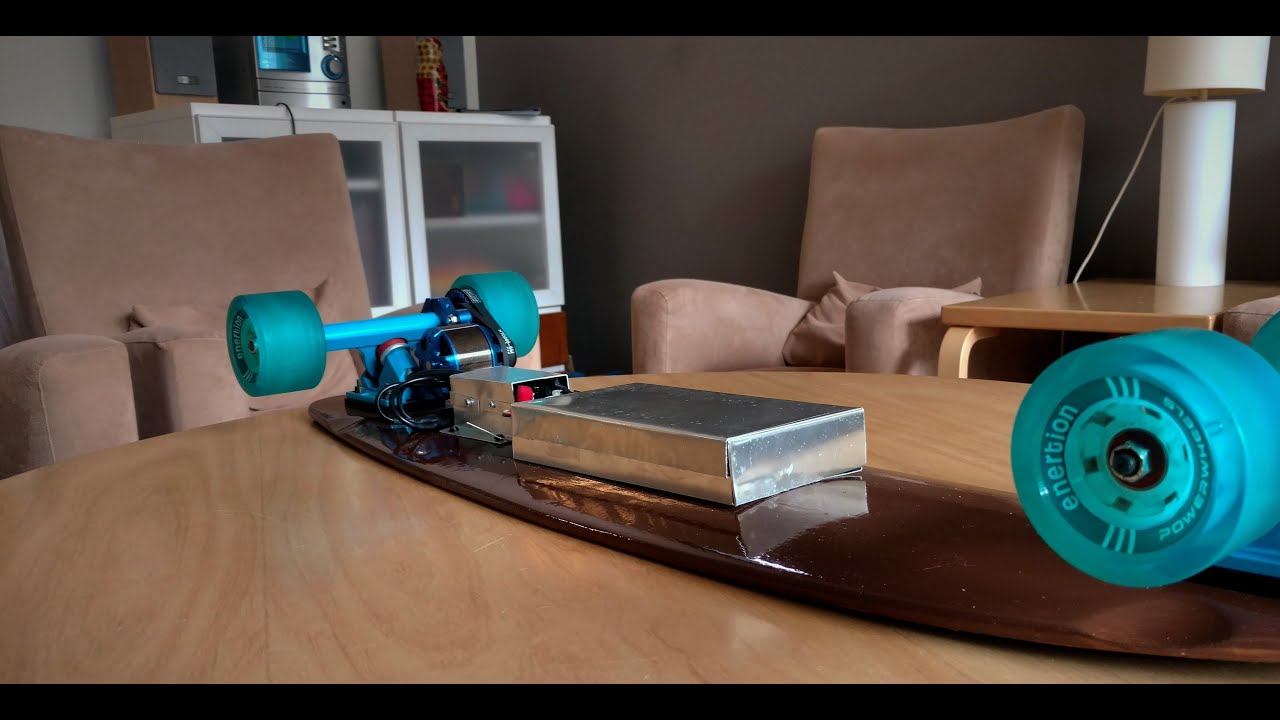 The story doesn’t end there as I didn’t take it as a defeat but as an opportunity to make the perfect board for me with the added knowledge from building the first board.

So, here is the BlackFinn: The first part of its name comes from its color (which obviously will be black) and the second comes from my nationality. I chose to go with a big SK3 as they’ve been described to be reliable and fun. From now I can say that the motor seems perfect due to its unique, a bit whining, noise.

The board is just a board that looked cool and was cheap. The looks didn’t matter too much as I’m going to paint it black. The deck is a drop-through but I use it as a top mount with risers. I would have loved to have a cog (center of gravity) but I haven’t found a way to mount the motor any lower. If anyone knows how it can be done please let me now.

I chose to go with Enertion with the mechanics mainly because the discounts they had on the mechanics kit. I also ordered a Nano-X from them but they haven’t even arrived yet so that’s the main thing holding my project back. Although I think it’ll be awesome as the last build had a Quanum radio which looked like a pistol…

For batteries I went with three 3S Zippy Flightmax 8000mAh batteries which will give me about 30km range wired in series. I would have liked to go with 18650 cells but I don’t have a spot welder nor a BMS, it was somehow safer for me to go with good old LiPos as I already have the knowledge and equipment for charging and balancing them.

So the assembly of the mechanics is too basic to be covered on a thread like this. My electronics cover is actually from somewhere I haven’t seen a lot of people take their enclosures from - it’s the bottom of a toolbox! Too bad I cut it slightly too thin so I’ll have to make some kind of borders to the board so that water won’t get inside the enclosure. The next step was to fit all of the electronics inside the small box. The wire configuration looks a bit silly but didn’t come out nearly as hopeless as I thought!

How was I ever going to wire all those batteries in series… Of course I had to develop a custom harness for it to come out pretty. The harness is made out of XT90’s and some thick 10mm2 automotive speaker wire which can stand the amps. That harness was a pain in the ass to solder as the connectors and the wires are HUGE, actually I had to get another soldering iron to manage soldering the connections properly. If you look in the harness’ you’ll see some bare points were the copper strands of the wire shine from - they couldn’t be insulated using the usual heat shrink tubing but instead I used some liquid rubber to isolate the wires. The batteries are connected to the board with homemade velcro-straps which seem to be strong enough to hold up the weights of the batteries. On my last build I always had to carry pliers with me in case I wanted to open the enclosure. NOT THIS TIME! I actually got so fed up of it so I decided to go full velcro on this build so it means this board can be converted into a regular, non-electric longboard in one minute. Convenient? That’s what I think. The BlackFinn will boast 45km/h top speed and a modest range of 30km’s. The final budget for the build was around 750€.

The final steps of the build are to wait for the Nano-X to arrive, to assemble the velcro holders for the enclosure and to paint the board 100% black! Please have a pleasant spring and feel free to ask me any questions related to the build or generally, I’ll be happy to answer.