This has been a dream in the works since I ever got into building electric skateboards.

The board break down is such:

the costs for tools need are as such:

Overall, as you can see, this was not a cheap build. But the results are amazing. I can go 20+ mph up 10% grade hills without issue, have tested to 30 mph on flat ground with plenty of throttle left (I’m willing to bet it can hit 45 mph on flat with harder bushings).

Again, the cost of parts alone sets you back $1290 (probably more since you need access to a cnc milling machine or another enclosure), now $1390 since carvon has since increased its price by $100

This seems more like a complete build price (similar to boosted boards or enertions completes). However, no complete on the market that is for sale today packs all of these features with such a high top speed. Epic Deck! Does it feel weird without a concave? It looks flat. What headlight system did you use and can it be controlled by your transmitter?

I don’t know if weird is the right word, but definitely different. I am still trying to figure out how to put concave into the deck, as cnc milling the concave caused all kinds of chips when it hits knots in the wood. Sanding seems to work, but its hard to sand the concave accurately (without spending way too much time on it).

But its not as weird as you would think. Concave does give a better feel though.

As to the lights, its the GT power 1/5th 1/18th off road lighting system. They are great, and allow for brake lights controlled by the throttle of the transmitter. I can’t turn the lights on and off however. With leds though, power consumption is not a major concern, at least compared to the power consumption of the motors.

If you want a good concave you’ll have to look into pressing the top layer. Its not that difficult once you make the form.

This is bad ass. I love it!

i just ordered that lighting kit from amazon, it arrived yesterday. I can’t wait to get my new VESCs so i can wire those lights into one of my decks and try them out.

What you spent on a CNC machine i probably spent developing my deck press. I feel your money pain, man. And you’re right, its totally worth it.

So how do you get inside it?

No disrespect intended, that deck is so quirky it’s beautiful. Pushing the envelope of conventional deck design. That’s how innovations get made. Love it.

It might be a little hard to tell, but the board consists of 3 layers of .75 inchs thick wood. So I cnc mill each layer separately, then run the wires through and hot glue the lights and wires in the paths I cnc mill out of the middle and bottom layer. Then wood glue the middle and bottom layer together, followed by the top layer. This allows me to cut down the cutting time drastically, as I don’t need to carve out the entire middle from a solid piece. I just cut a rectangle out of the middle and top layers, and make a sunken ledge around the center hole for a lid. Then I cnc milled the lid to the cuts need for the space cell, screw the lid in place with tiny wood screws, and throw some grip on top.

Its hard to tell, but near the front truck on the top, there’s a small vent with a fan underneath.This helps keep the vesc’s cool.

The interesting part though is each layer has its own specific cuts for running wires. The bottom layer is essentially solid piece, with the only cuts for the wires and ports of the motors made. The center layer is cut just for the light sockets and light wires, while the top has the cut to make the ledge for the lid to sit on.

Overall, from my last board, I can cut the cutting time down to around 12 hours, if the x-carve doesn’t mess up, which is always has at least once while building a deck.

I do need a deck press though to use with the x-carve, so I can try to make the boards thinner and with some concave. Its tough money wise to build your own decks and I can see why they go for $300+, but I would like to eventually sell some of these boards after I can test it more and can add some concave. I think build in lighting is the way of the future for electric skateboards, along with on board data such as a tachometer.

Also, thanks for the positive feedback guys. It’s encouraging to say the least

Its tough money wise to build your own decks and I can see why they go for $300+, but I would like to eventually sell some of these boards after I can test it more and can add some concave.

What cost me a ton of money was the iterative development, the learning.

The mold i had CNCed by a guy who took my illustrator drawings and made cad files from them for me and mailed me a mold. Shipped to my door it was $500.

So if you pick up where i am right now, and don’t re-invent the wheel, you can start pressing decks for under $800.

That doesn’t include veneer, which i get shipped to my door for around $260 and includes enough material for 10 7 ply decks, or i can get enough for 10 9 ply decks for a little over $300.

All of this is WAAAAY less than the $3000-$5000 you’re going to spend buying a commercially available steel frame 10 ton hydraulic deck press. I have a thread on here somewhere, i think… So i pressed a deck this weekend

For those of you who didn’t already see it on my instagram: I was finally able to press a deck this weekend. After months of struggle and agony and sacrifice and sorrow and a bloody pinched pinky finger, I finally have a 7 ply Rock Hard Maple (Acer...

@evoheyax Sick Board! I noticed you said it was $500 for the dual motor carvon but on there site its $600. Is there someway to get a discount? I really like their setup but I’m in college and money is scarce

They were $500 at time when I bought them around 6 months ago. They have since gone up and I believe will go up to $700, as they show on the site. Sorry no way to get a discount, but they are getting better and better. For example , they now have ceramic bearings which is something mine do not have.

My recommendation is not to get carvons if you don’t have a lot of money.

I gotta be honest. When I first saw this deck, I wasn’t too into the shape. However, the more I look at it , the more I like it!! IT’s got it’s own style. A renegade, a wild card, a loose cannon…Badass…The thickness of the deck really allows for the lighting rig to be a very prominent feature. When you ride down the street on that, people have to recognize and take a second look!! A little advice on concaving: Take a planer, or sander, if that;s all you have to work with, and go up and down just through the center of the board. Mark a centerline and sand it down, only in the center, until you get the right depth, then work your way towards the edges being careful to keep the curvature like you want it. The method I would go with if I wanted to work faster would be to use a router to make the center strip cuttout to the depth I wanted. Then I would use an angle grinder with a 60grit sanding pad on it to remove wood FAST. Then I would use a random orbital sander to clean it up. If you are comfortable with an angle grinder it can save you loads of time.

Thanks for the honest feedback. Its not the ideal shape for me, but it is just a prototype. I have a long way to go to making boards the way I envision it looking.

Just an update, I have modded the battery to output more amps, currently set each VESC to 25 amps, or 50 amps total. This has fixed my hill climbing problems for now.

Also, just a little video of it in action. nothing fancy. mostly, this is slow riding, nothing above 20, but I have tested it to 30 mph, and could easily go much faster. 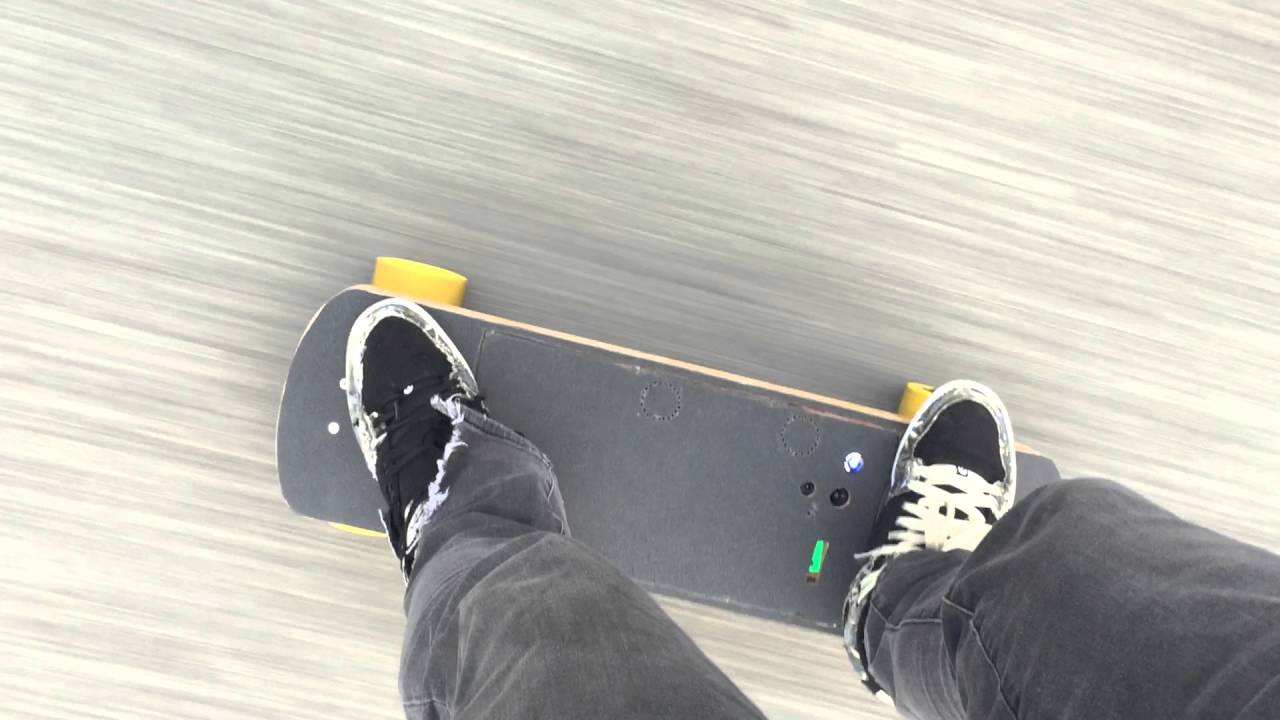 Nice video. That thing moves!!! Your wiring looks clean too. Keep up the good work!

With loads of hills, about 5 miles. And yes, its a 10s3p battery. I need a bigger battery, and that will be the first change to this board when I have the chance. However, I can’t fit a bigger battery in this particular board, so I’ll need to make another board.

very nice build. since the board is a little taller than standard, doesn’t it sort of affect the balance?

It will feel weird at first, not only because of the height, but the lack of concave. I got used to it pretty quickly, and it doesn’t make it any particularly harder for me to balance anymore. I also have been skateboarding (pretty much daily) for 10 years, so I understand balance on a skateboard better than most who would call themselves skateboarders.

don’t take this the wrong way. have you tried using multiple thin layers of wood and press them one layer at a time while gluing each sheet on?

time consuming but i think it is the easiest to achieve the concave for wooden decks. 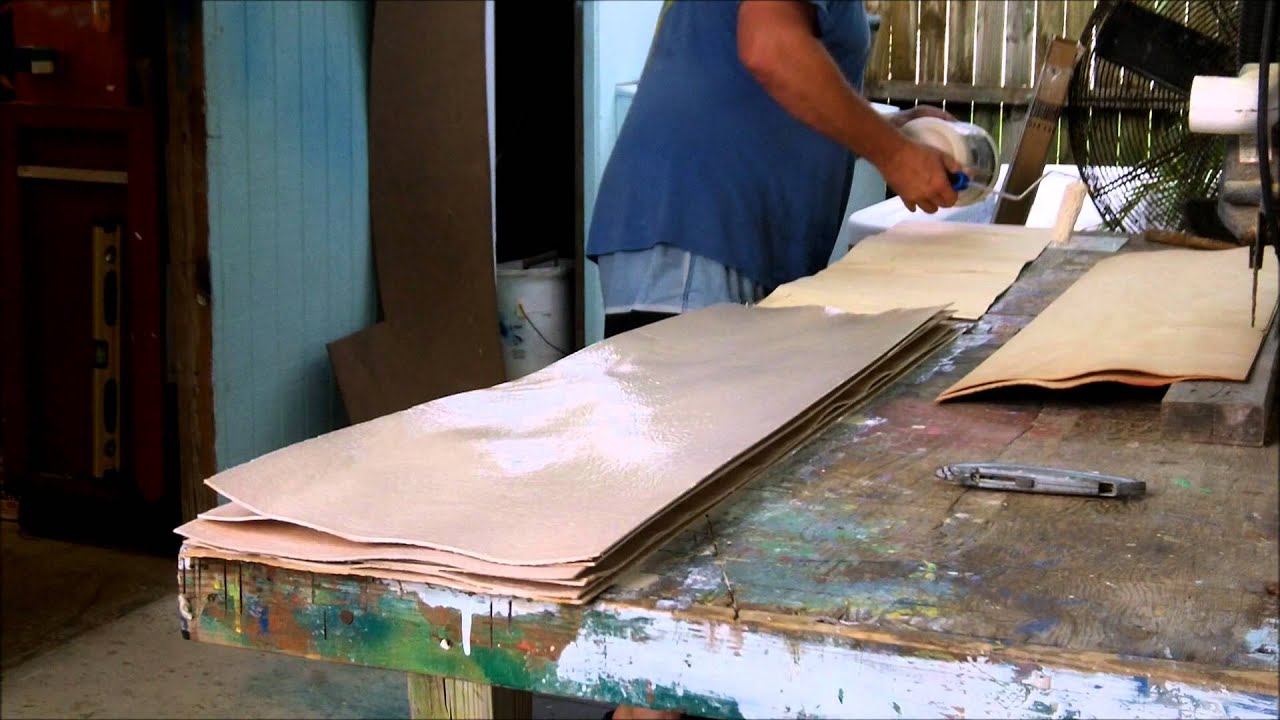 no, I want to. I really really do. But right now, I’m broke. I’m trying to work this summer break to get some money to invest in the right equipment to do that. I was think of pressing carbon fiber/wood combo decks like that, so I can achieve strength while keeping the board thin. The idea being I would cnc mill each sheet separately, then glue them together with the cables embedded.

This was really a prototype design, to show proof of concept, which is that I can make a board using my x-carve and other basic tools with an integrated lighting system. This is just the beginning.