So after a couple of builds I wanted something I could carry around easily and should be a comfortable cruiser, however I was going for something else this build was not really planned. I was planning to do two builds, first AT build with wheels swap able to Gummnies and another short distance commuter. However I wasn’t too satisfied with either of them. So I just pulled both of them apart and built this. I am calling it the Endgame because this is likely my final build depending on how the testing goes.

Pulley config is 15/44 with 125mm gummies. Top speed not yet tested but should be around 23Mph, which is fine for me as I am too scared to go at higher speeds anyways since I broke my collarbone a few months ago. I might change motor pulleys if I want higher speeds later on. 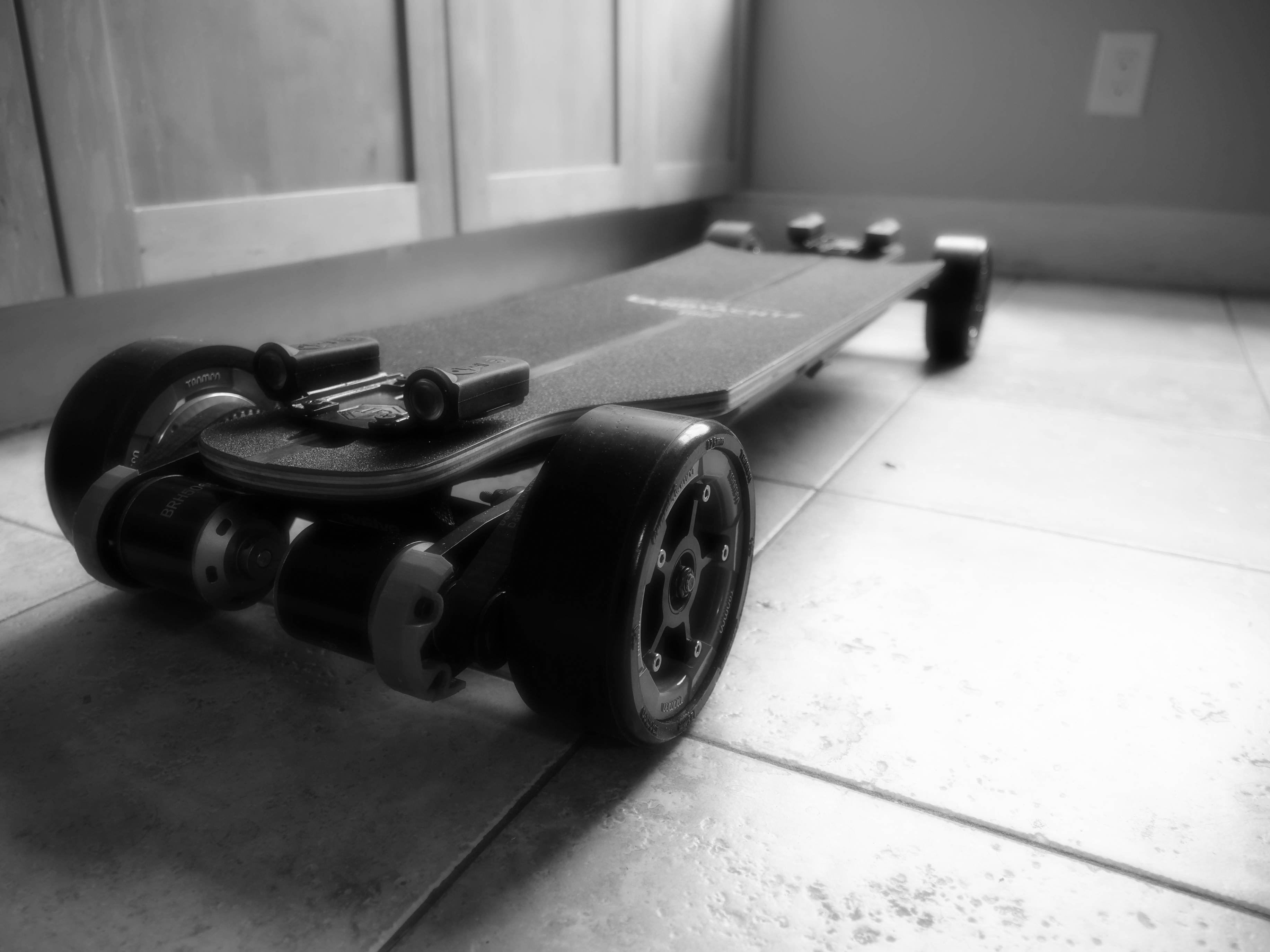 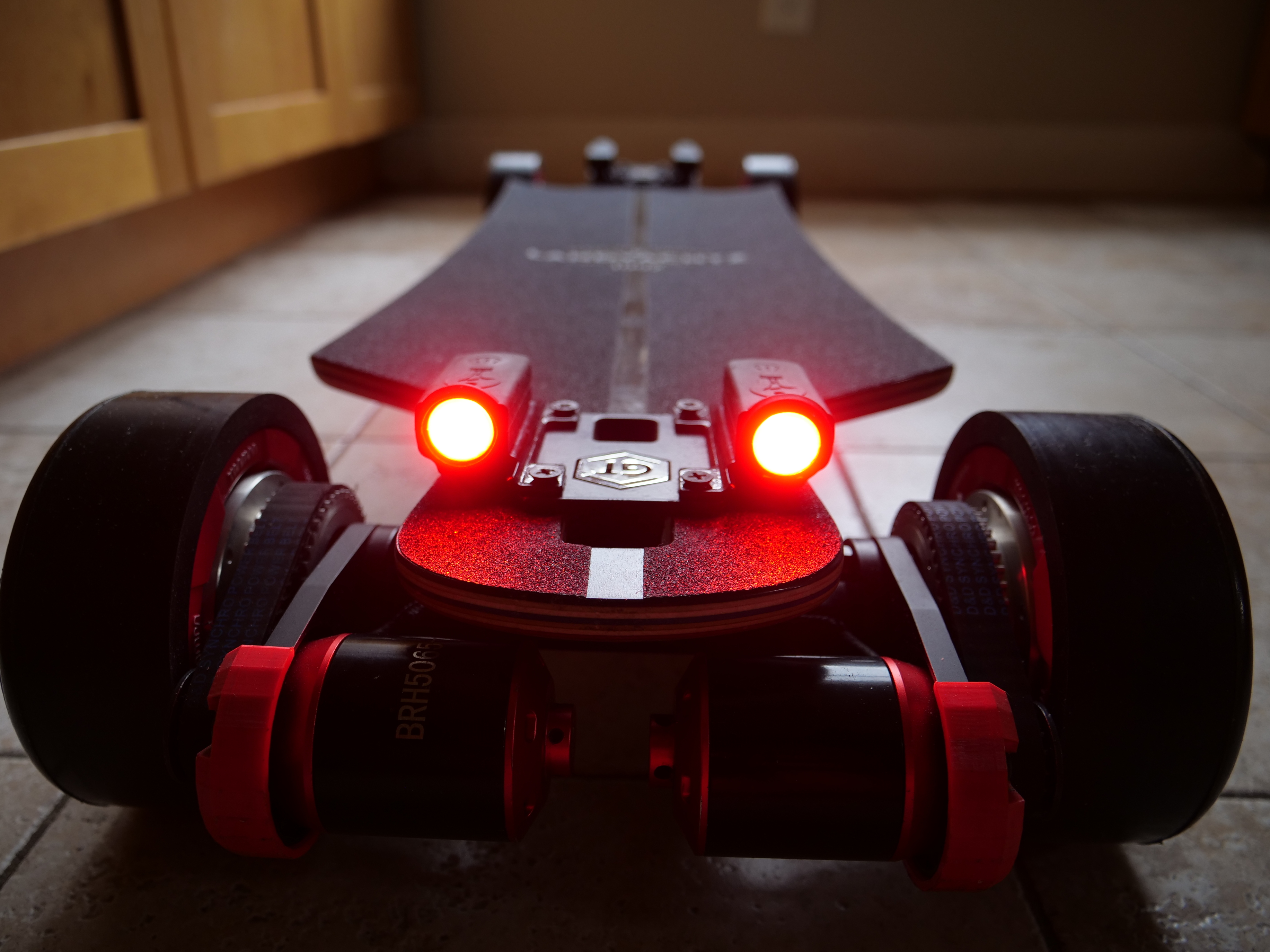 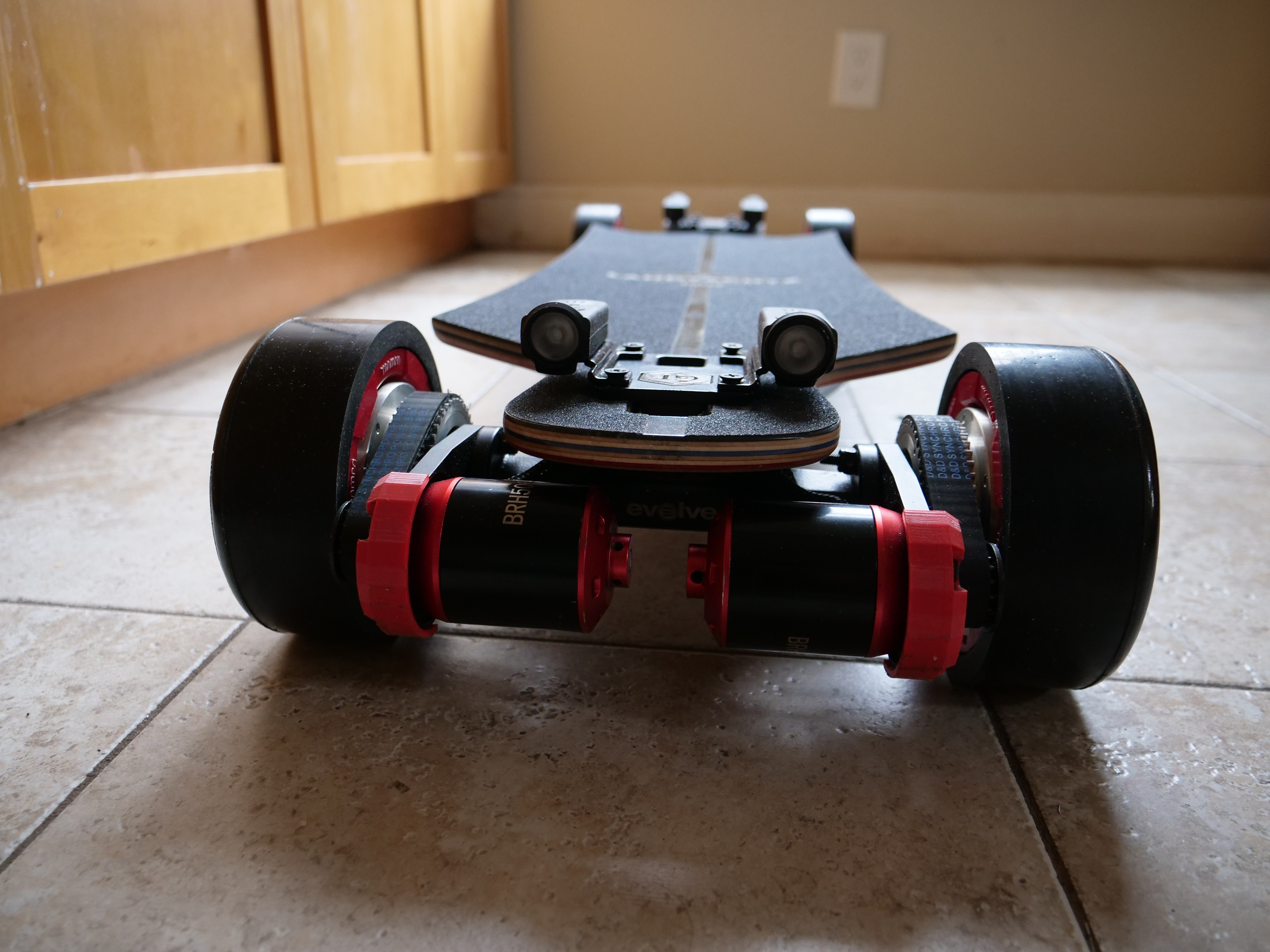 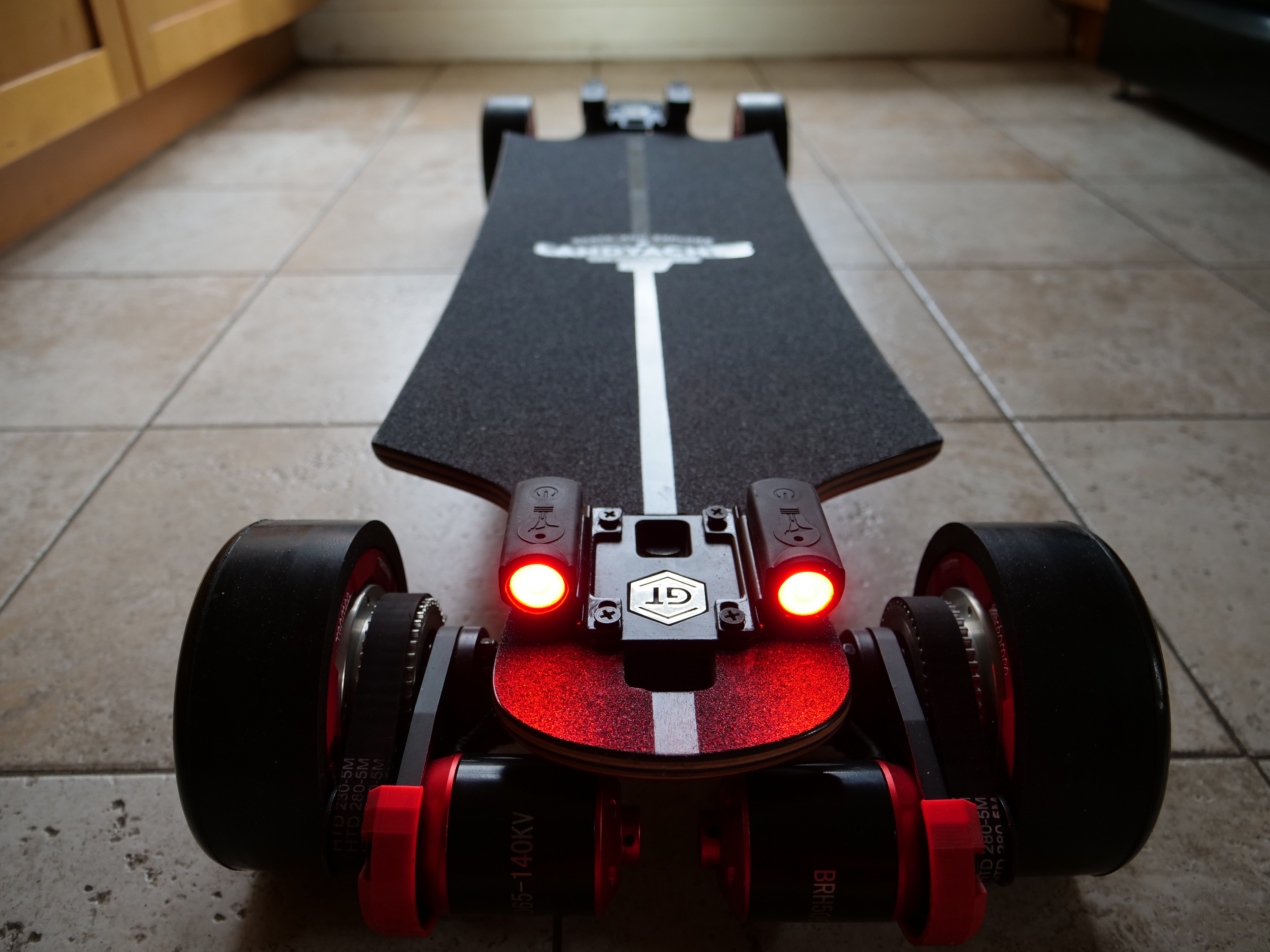 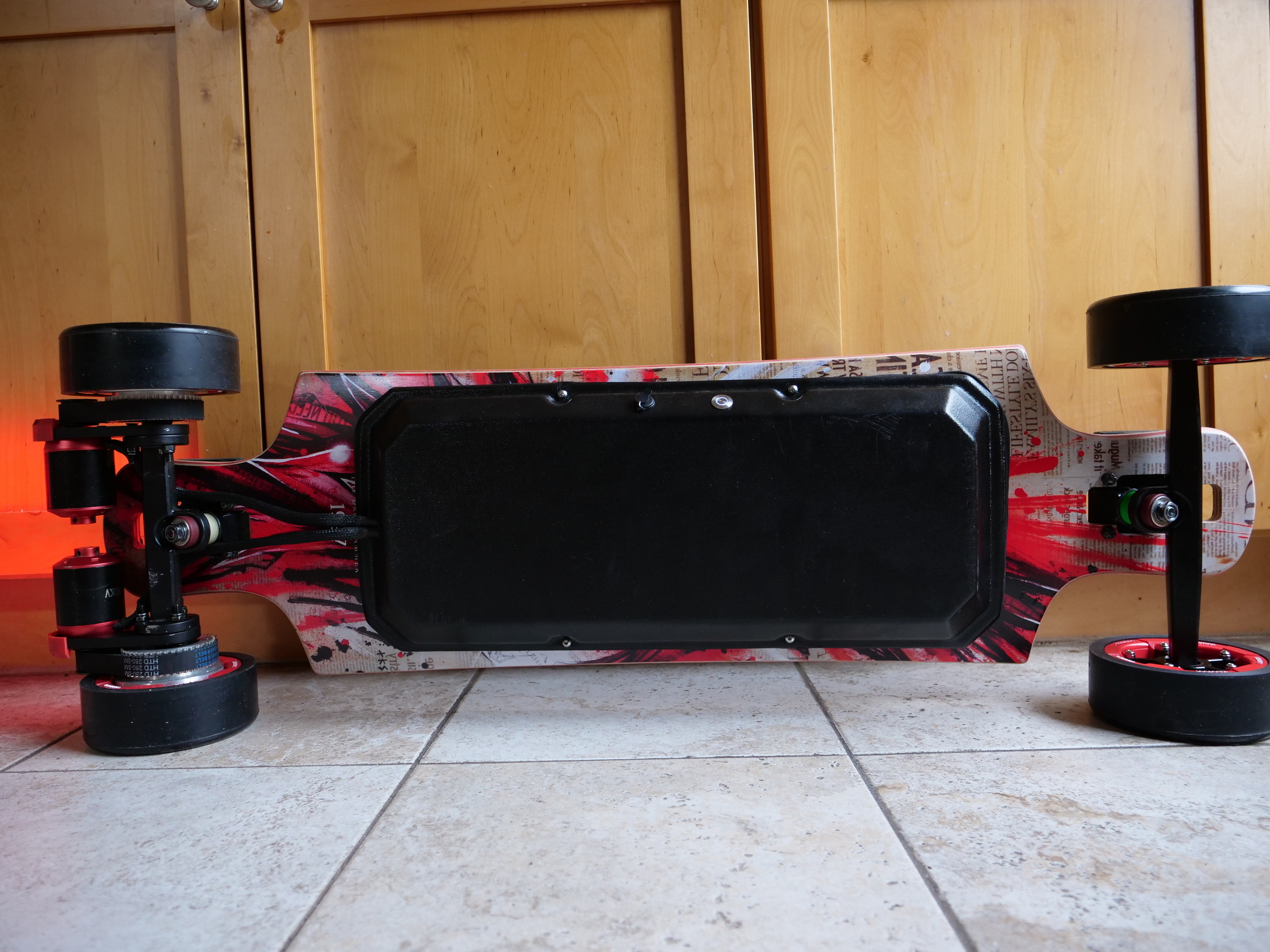 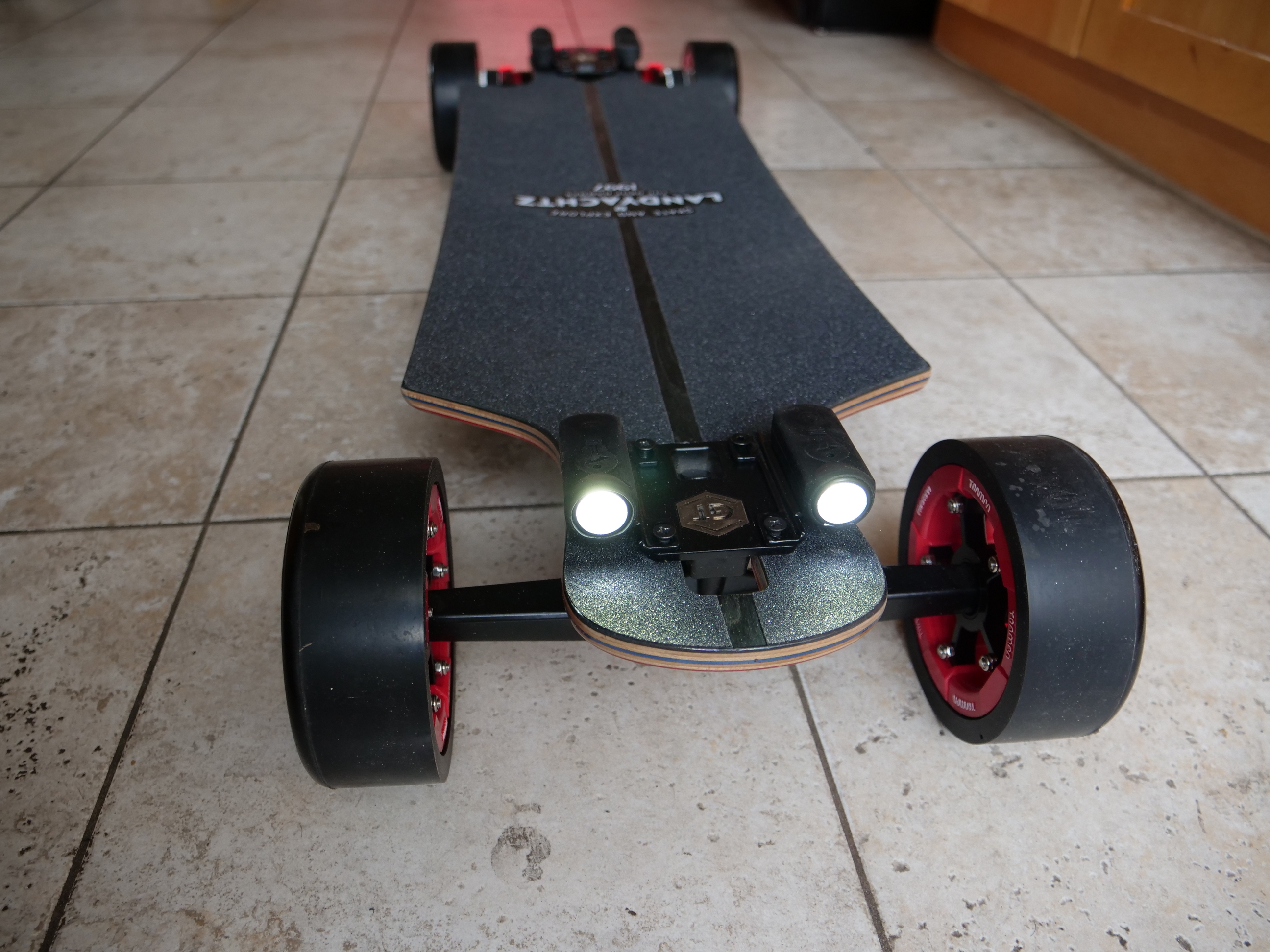 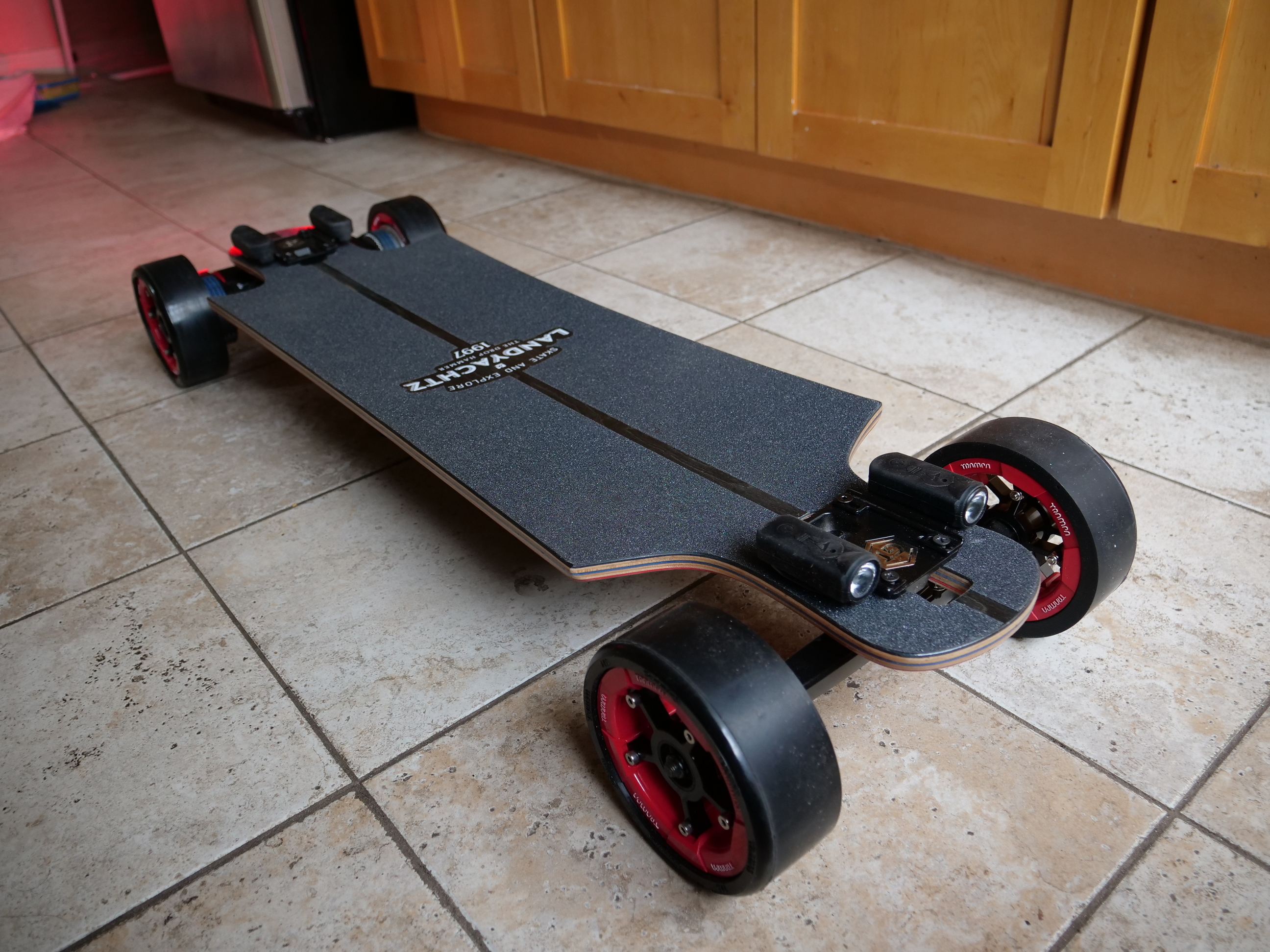 Few things I had to change were I had to switch motor pulleys to Jlabs ones as the one that come with racestar motors don’t have a flange on the outside so the belt would be half off the pulleys. Also had to file the motor shaft to create new low spots for the new pulleys to sit.

Since Evolve motor mounts are fixed I had to drill new holes in them to lower the motor mounts so they wouldn’t touch the board while turning. Also removed the extra kingpin and lowered the ride height significantly. Not sure how this would effect the stability. So far I have only gone up to 15mph on this and they were stable I’ll keep going up slowly and hope I don’t kill myself.

I build the battery myself and I do have videos of the whole thing, I’ll try to make a hyper lapse of it if I get some time.

Cool build, how much does it weight lol?

19.2 lbs which doesn’t sound that light because evolve trucks and the wheels are fairly heavy but at 36" its still just light enough and small enough to be able to go flight of stairs easily or carried inside a mall or office if needed.

haha, I am so glad I was able to keep this under 20 pounds.

Yeah, they are fairly overbuilt at this point so I can totally see them being on the heavier side.

this is likely my final build

LOL…i am on a 3rd build and i always say that…looking for a “End Game” build myself, but new stuff is always coming

Lol, I agree, its hard to stop. But this is my 4th build and I am also getting tired of doing one build after another. Maybe I’ll switch the drive train to helical gears in future and Maytech 170kv motors if these develop problems but after my latest run I would say I am quite satisfied with this build for now.

It rolls over everything, its very comfortable, its fairly light, has a pretty good range, low to ground. At the risk of sounding too much like Thanos i would say its very balanced. I can do 18 Miles on it which is more that what I care to ride without stopping. With a high amp charger this build is a dream even for group rides and stuff. Now if only this god damn rain would stop, so I can actually ride.

Only have to finish my FeatherNano remote now so I can move on from mini and clearly see my battery percentage.

Nice build. How are the racerstar motors holding up?

I’m thinking of using racerstar 5065 140 kv, red racerstar 15T motor pulley, evolve motor mount, evolve hubs with 6.5 Trampa tyres, 66T wheel pulley. I wonder if I will run into the same issues as you described about the belt not being aligned?

Its possible, I didn’t have this problem with my previous build but the 44t pulley has a bit of space on the inside as well. So only the motor pulley is keeping the belt in correct position.

Why go for evolve trucks at all? they suck, I already had them so I just used them but get some Surf Rodz tkp trucks way nicer and cost is the same.

@BearHere Also the racestar motors are fine, just fine, but you might want a little more oomph if you are going with AT setup.

The Evolve trucks just fell into my lap as a trade in and I started planning around those. Appreciate the advice though! I’m cheaping out on the motors with the racerstar to get up and running, slowly. They will be upgraded eventually. The other components are up to spec. Hummie deck, 12S4P 30Q, Unity.

Your built looks great. I love how you made the ugly red and black racerstar motors and make it work with this board. And I know how you feel about going faster then 25mph. I too had a fall 7 months ago and broke my collar bone and I get PTSD when go faster the 20mph. I can go 22 or 23 for a few seconds but I just can’t hold that speed for long.

howdy, so how are the evolve trucks with a single kingpin? i recently juiced up my bamboo GT, but it feels sketchy at speeds with the double kingpin set up, I got good bushings, which helped, but I am thinking about putting it all on a different deck and going single kingpin. Have you ridden TB 218s? that is what i have on a couple other builds.

I haven’t tried 218s but I have tried calibers. And I would say it’s slightly more carvy than calibers but it’s more stable than dual kingpin. Basically its about as stable as a tkp truck.