Since I do custom boards on the side I had a blank deck laying around that I was able to use. Its 8plys of American Hard Rock Maple. Originally I was going to use Bear Grizzlies that I had laying around aswell but after trying to get the motor mount to fit right I decided to go with Caliber II trucks. My parts list included a 10s4p 30Q battery pack made by @scepterr , dual focboxes, dual racerstar 5065 200kv motors, motor mounts from @marcmt88, 83a Kegels, Nano-x Remote and a 405 @psychotiller enclosure.

I was part of the big Cyber Monday deal that Enertion had and then had to wait till mid January for them a little over a month wasn’t to bad to wait for them especially since it saved about $150 bucks.

My total bill came to right around $950. Which I think is not bad at all for a complete custom board that I would say is better in overall performance than any of the pre-built boards from Boosted or Evolve, Definitely has a better ranger on the battery then all 3. The experience had its highs and lows because I struggled with putting on the motor mounts as they did not slide right on or easy for that matter and the enclosure holes that I had drilled did not line up when I would screw in the bolts but I was able to modify the enclosure with the help from my Dremel and got it straightened out. It definitly helped in doing alot of research before and during the build process. So any noobs looking to build there first board do a lot of research and ask questions.

Here are some pictures of the build process. 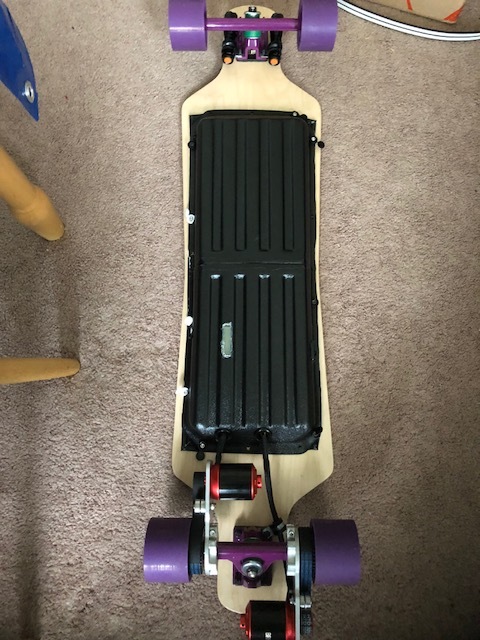 Hope you guys enjoyed the pictures and thanks goes out to a bunch of vet builders on here.

Tell me bout the graphics

What did you want to know. It is wood burned and then posca paint pens for the color.

that enclosure looks slim too.

Great looking deck, I like the wood burning a lot.

This looks cool as hell dude.

Thanks dude all the custom decks I do have the graphics burnt in.

I was only able to ride it a bit yesterday as I had a bbq to get too. I plan on riding it more tomorrow to get more comfortable on the deck.