The secret of flexible enclosure?

Well hello there. As most of you know, flexible decks has not been the best friend of esk8, adding complication, where you already have so many.

But some of them, the mightiest of them all manage to do the “impossible” : flexible deck with their flexible enclosure…

But, I hear you little Kevin on the back : “Durr Durr, my Boosted is super flexible, what are you saying you stupid dumb juice ?”

Thank you Kevin for pointing that out : the scooted brand is indeed making some flexible boards, but how do they manage to do such witchery ?

That’s why I separated flexible enclosures in 4 categories :

These are or me the 4 possibilities to make an flexible enclosure for a flexible deck (duh) Apart from different techniques, you need to thing about the material used. Fiber is not an option here, being stiff as hell, both for carbon fiber or fiberglass.

Thermoformed ABS enclosure are common, but can ABS plastic bend with keeping the deformation or snap ? Is there any other solutions to the first world problem (and quite niche if you ask me, we could all think of something else but no.) that represent flexible build ?

After writing this, I realized this wasn’t the most useful of posts, but let’s engage in a conversation on flexible enclosure, lacking on this forum.

You can also get flexible resin, so fibreglass is possible. Not sure how flexible it ends up though, maybe too much?

You are saying that Eboosted enclosure are fiberglass / carbon fiber made ? Why do they look so mat, really like abs ?

yes they are fiber glass then I guess top coated with the colour he used.

But for a flexible enclosure made of several slices, don’t the slice need to slide back and forth to be able to bend ? or the fiber have enough natural flex to dampen this need (like the wood of a skateboard deck) ?

You can print in TPU which would give the same effect. @Niak has made something similar. 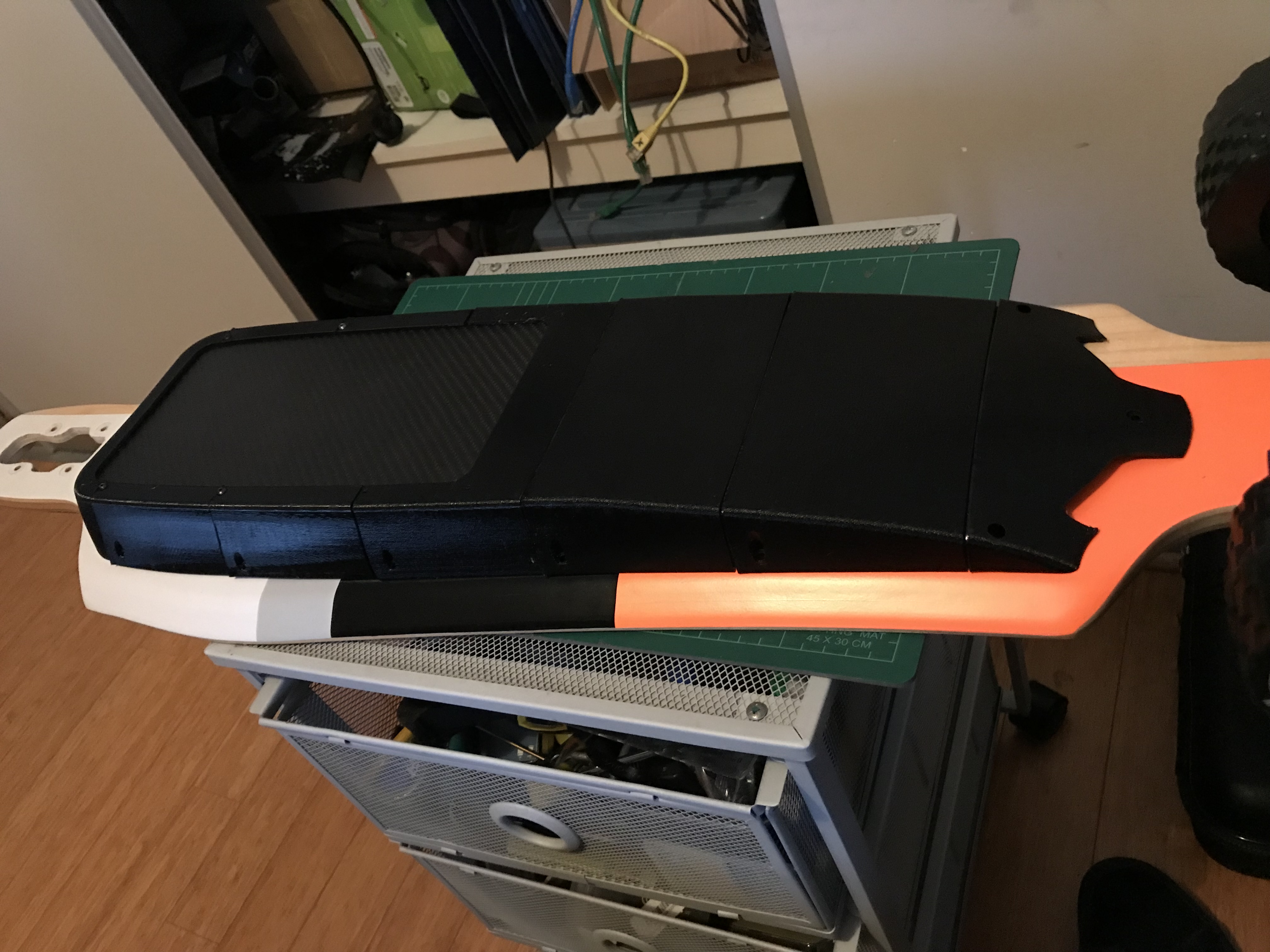 didnt someone on the forum used a 1/4" thick rubber sheet? and bolted down the edges and ends

That’s what I was going to mention… I took a serious look into doing this myself.

I think it would be perfect with some sort of hard outer casing for the bottom to take scratches and slides. Otherwise, there are quite a few flexible rubber sheets that have good abrasion resistance.

I use flexible resin but don’t paint them. The colour they are is the colour of the resin used in the fibreglass process.

Yep I did that on several builds: 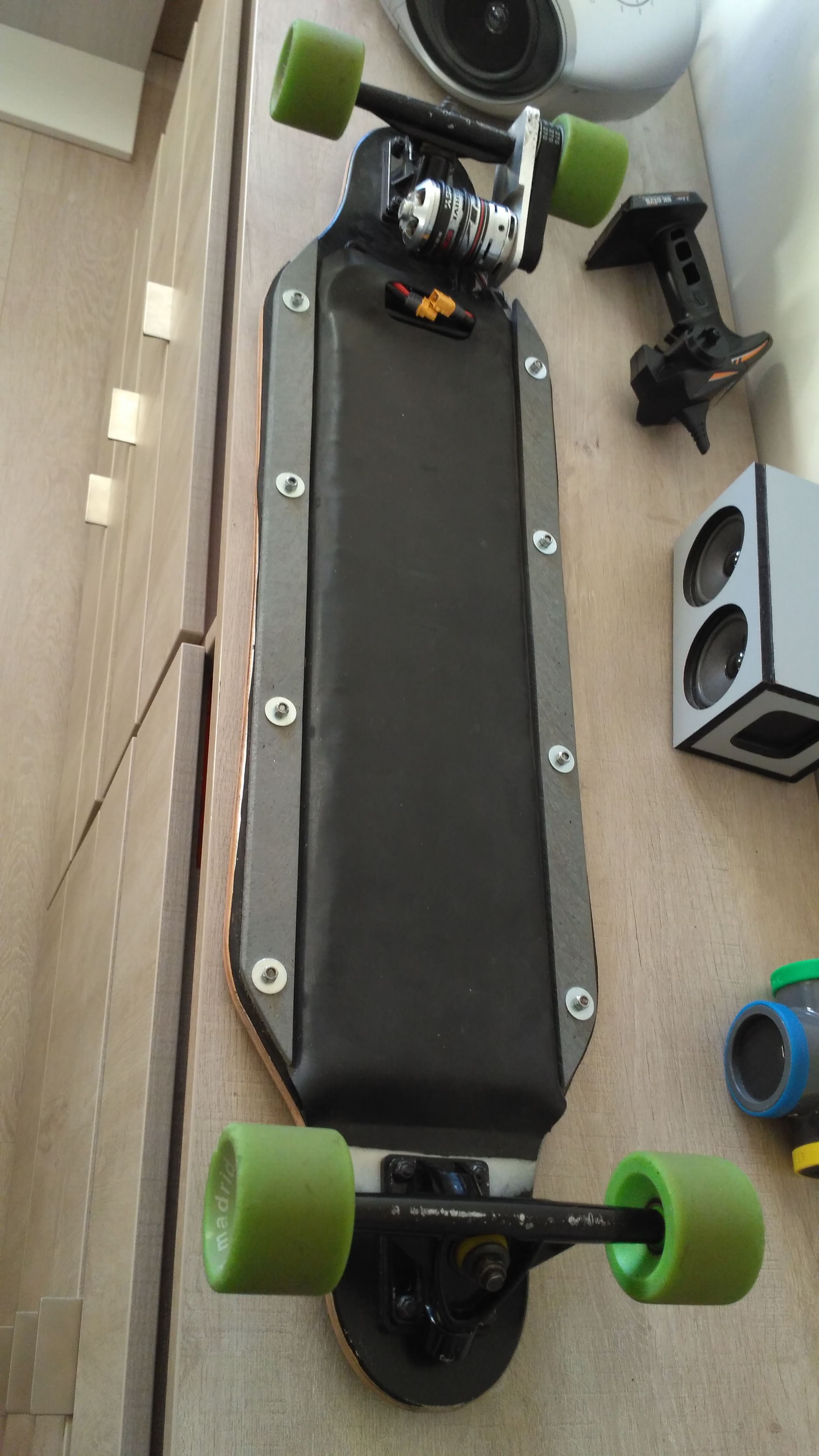 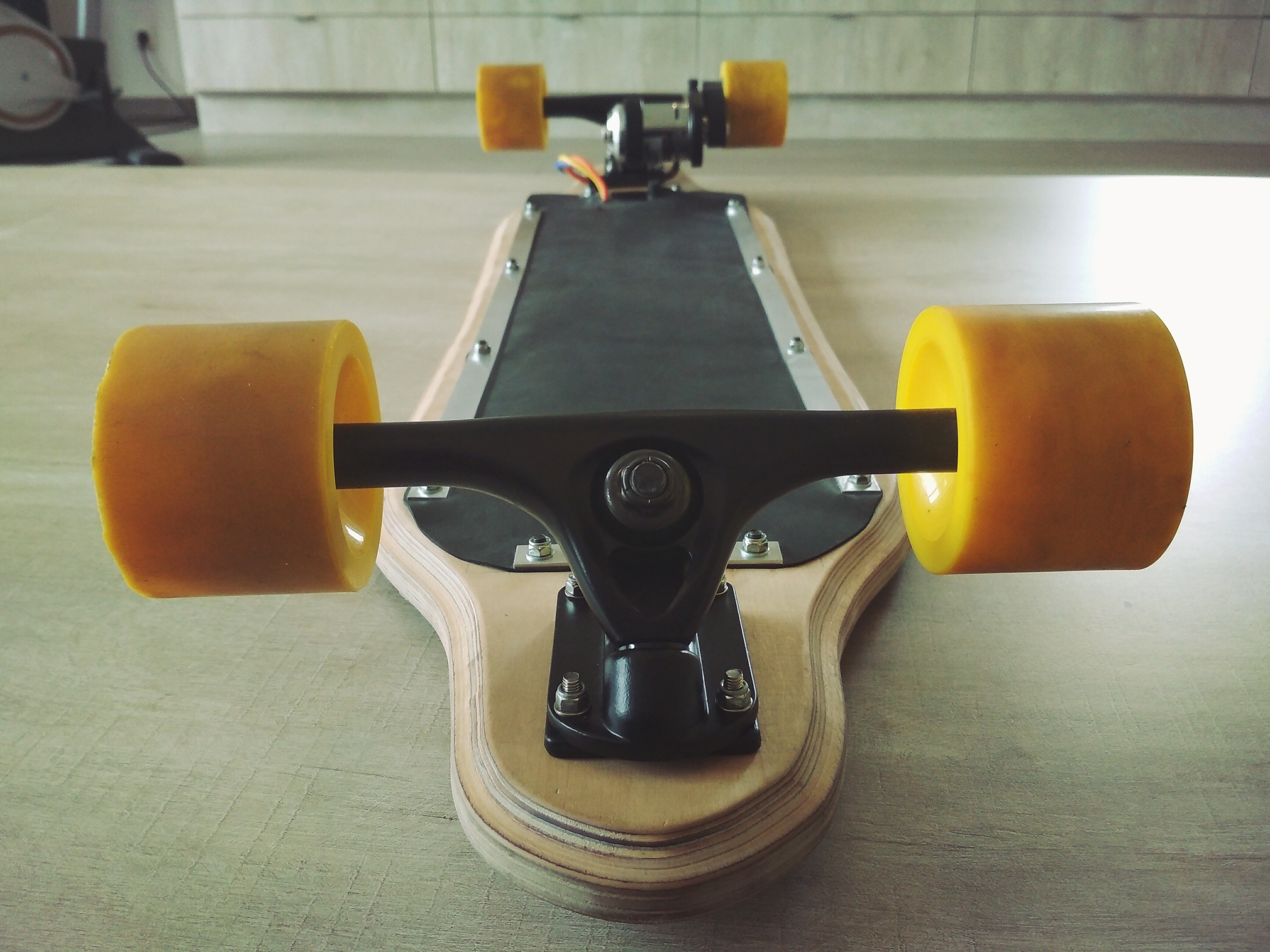 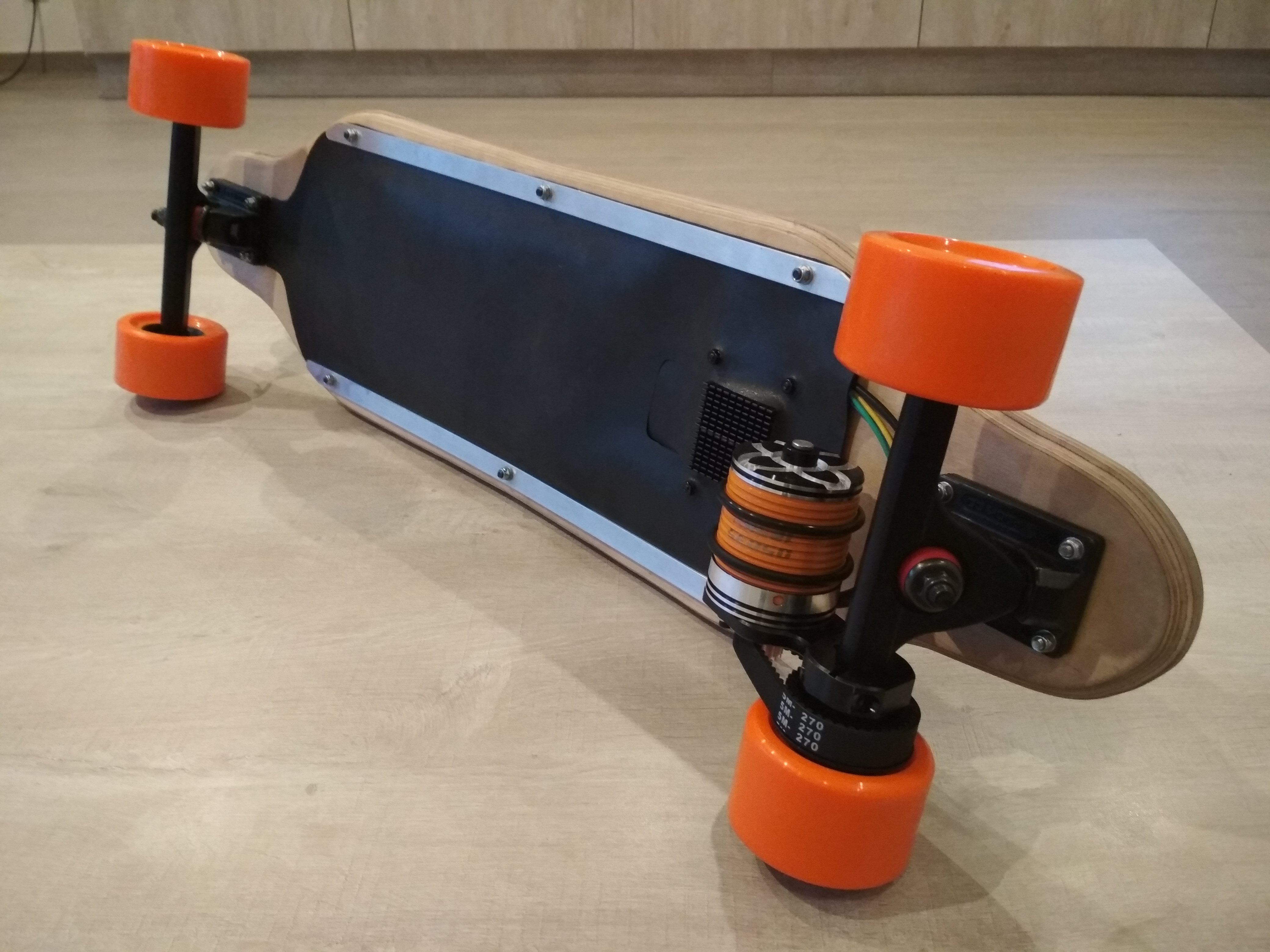 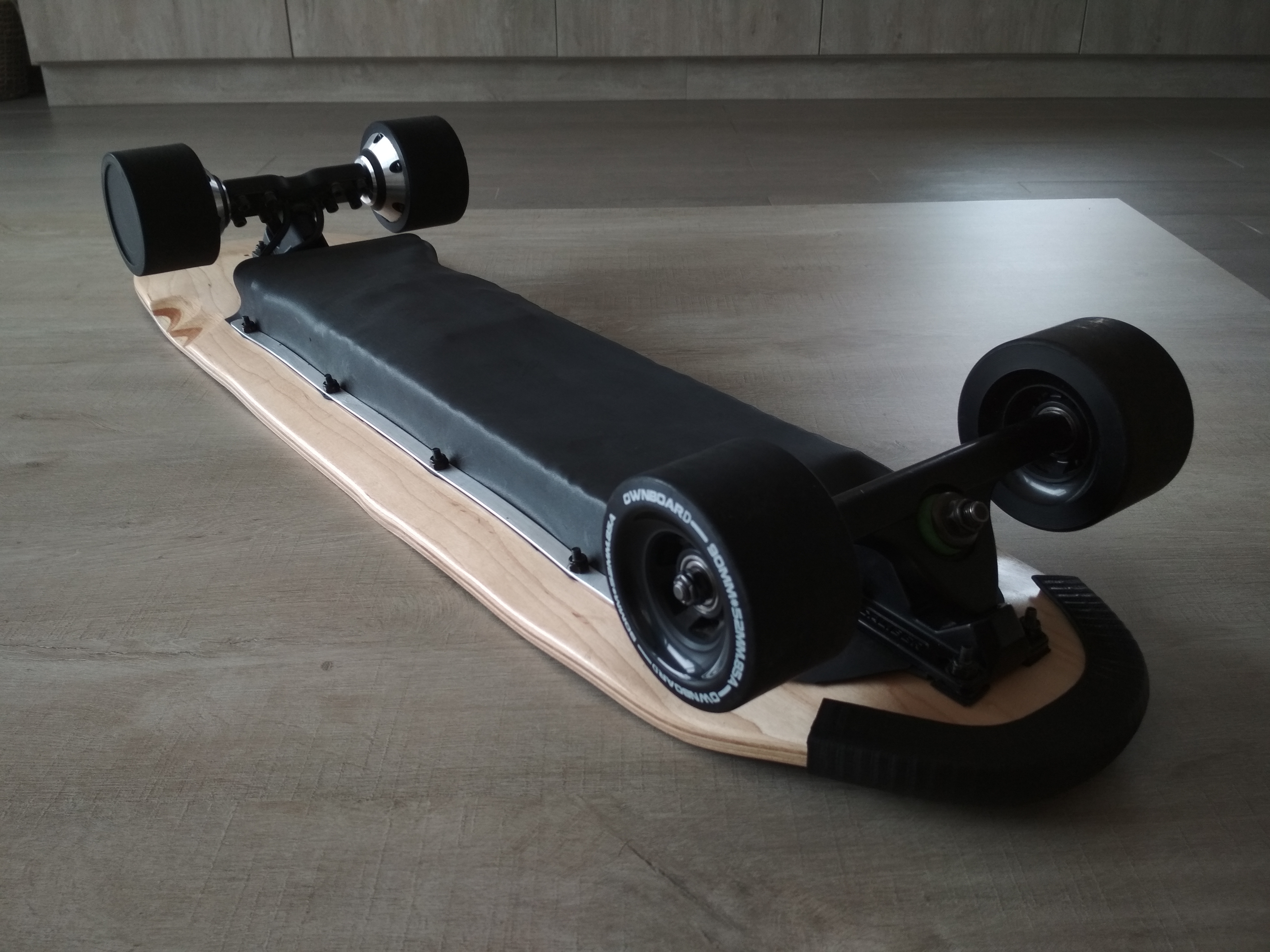 Very interesting ! How did you made it ? The rubber is not too flexible (not protecting against hits) ? How did you make the corner on the second enclosure ? And finally having a metal bar on the side to hold the enclosure doesn’t stiffen it a lot ? or it’s thin enough to conserve some flex ?

The rubber is very flexible so it actually won’t protect much but you can always put a layer of plastic sheet underneed.

The corner? It’s just cut with a scissor.

The boards were all still flexible, a bit stiffer but didn’t affect the riding experience, the metal bar is only a couple mm thick and only 15mm wide.

The corner? It’s just cut with a scissor.

I think you misunderstood what I meant How did you manage to do square shaped boxe with a flexible rubber ? on the 2nd boards

Looks great! I didn’t know there were so many options already.

What about fiber glass, it can bend like mad before breaking. A fiber enclosure + Kevlar layer is bound to be bullet proof and flexible, could do the trick too.

Ooh that’s just because of the shape of my battery, and on the backside I have 3D printed a piece to fit the charging port, motor wires and switch.

Use multimaterial 3d printing with TPU

Note that if you don’t have a direct drive extruder on your printer that you may have a bit of trouble with TPU. Sainsmart is the best around to mitigate the associated issues. I learnt the hard way