Tightening/loosening the bushings while driving

Hey I don’t have too much experience in riding electric skateboards because I am finishing my first build atm. But have a question:

Would it be handy to be able to tighten/loosen up the bushings while you are skating? So if you go faster you can tighten the bushings to avoid speedwobbles and if you slow down they will get looser (if that is english) to carve more.

Would it be useful? or is tightning the bushings for one time to your likings on top speed good enough

Edit: ignore how it would be done (I will think that out)

I cant really imagne how that would be done…

I think you mean, tighten or loosen your ankles, which your brain should do for you

Haha hmm that’s also a good point. Do you think that loosening and tightening the bushings while riding isn’t necessary?

A proper truck setup should allow you to use the entire action of the truck. Ie the truck should be tight enough that it is stable but loose enough that you can do a full lean.

If your having issues with stability with this type of setup, you should switch to raked trucks instead of rakeless.

It is so good to have an experienced downhill longboarder on the forum. I always wondered how you could have so much stability at 50mph and above with a seemingly loose setup. Now I get it, it’s all in the ankles.

It’s ankles, but trucks help too… positive rake makes it so the center is “numb” then turn drastically increases on the lean. Both play a part, really though I think rake/rakeless is personal preference and really depends on the rider and comfort level. Regardless, rake can aid at any speed…

I like rakeless, or raked front and rakeless rear. But that’s just what my body “feels” is right for my inputs.

What are Caliber II raked or rakeless ?

Here’s a good one about how raked vs rakeless react

More useful would be the ability to change the pivot angle while riding, which is something I’ve had on my mind for near a decade. It would be less about stability when going fast, and more about turning on a dime while poking around at slow speeds.

Here’s a good one about how raked vs rakeless react

Thats a little bit deceptive. The relationship between degree of lean vs degree of turning is completely fixed to the pivot angle.

But what does change is the resistance at the different amounts of lean, and the perception. 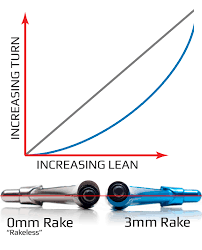 Just because sabre puts it on its website doesn’t make it right.

The ratio isn’t actually linear on any trucks, I think its actually a Cos function. Either a Cos, Tan, or Sin.

If you look at this calculator: Different Wheelbase Same Turning Radius? Dial in Your Next Setup With The...

44º Calibers on a 25" Wheelbase have the same exact turning characteristics as 50º Cals on a 30.5" Wheelbase.  In this Article we'll show you how we figured that out and give you resources to dial in new setups without the guesswork. We...

You’ll notice that the mms of rake is not part of the equation for determining the turning radius of your setup for a given lean, because it simply does not effect it.

It affects the force needed to progress through the lean.

How else do you explain visually what you see then and how it feels?

Yes the line the physical axle moves is a straight line.

Also your comment about not linear on any truck

How else do you explain visually what you see then and how it feels?

Yes the line the physical axle moves is a straight line.

I’m not talking about axle path.

I’m talking relationship between degrees of lean vs degree of turn.

If you take the same truck, one raked and one rakeless, and you lean them both 10 degrees they’ll have the same turning radius. That relationship is fixed based on the pivot angle.

But if you measure the amount of force needed to lean 10 degrees, it can be different between raked and rakeless, and that is what makes raked trucks feel like they have a faster progression, and it does make them actually more turny. But its more turny because you’re leaning farther for the same amount of force, not because they have a different relationship between how far they lean and how far they turn.