Just for fun guys. I’ve found that today. Quite funny .while Enertion. Carvon. Ollin tries to make world a better place here we have two dudes rebranding cheap boards from CHINA. Over 1.500 sold - 700k$ in pocket. 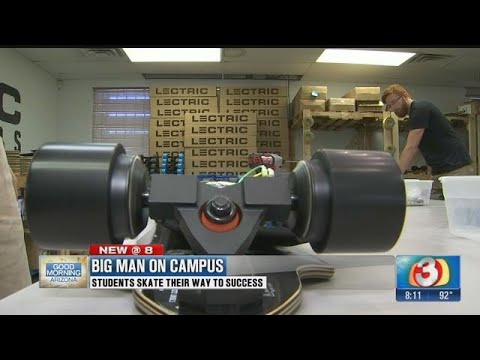 They sold 700k but actually they didn’t Cash out all of it. They didn’t tell about the investment. Sad anyway. Profit always outshines ecologism. Let’s look at the bright side of life. They made a better world while getting rich. All those sk8 sold prevented a big bunch of car commutes.

This technically isn’t possible without China producing cheap parts to fit a student demographic tight budget. Their boards are only $599. I think their profit is $200 to $300 per board if you were to base it on the cost of the Meepo board.

It’s kinda weird… they sold 1500 units and I had never heard of them. Not that I know every board on the market, but at 1500 at least people would have mentioned their name once or twice.

I’m going to assume they sold that many at a small handful of universities or high schools, to a large number of students at each one. Possibly just one high school and one university… Just a guess anyway

I think FabTrav (YouTuber) might have made a video on a board by Lectric. I could be totally mistaken tho

They realistically made 40-50k each. Maybe. Then there’s going to be warranty’s and returns. Lectric? Personally, I haven’t heard anything of them aside from this video which plays like campus propoganda.

@Martinsp I think you need to re-read the thread dude. @NAF is not claiming to be Lectric he said:

…Ollin tries to make (the) world a better place(,) here we have two dudes re(-)branding cheap boards from CHINA…

he is not trying to promote them…

I think that what you say is not true, I highly doubt that you ordered parts for all of these 1.5k units at the same time, got a quantity discount and therefore there is no way you could get to the 700k mark

@NAF is just sharing a video he found dude. as for you, apart from being offensive: I think you have a few roos loose in the top paddock mate!

I think you have a few roos loose in the top paddock mate!

I’m trying to fit this phrase in my everyday lol

I’m trying to fit this phrase in my everyday lol

I can see it now: SPD2, just before one of the lad’s makes a run on his 60mph death plank…

That be calling the kettle black, wouldn’t it? Lol

I just want to see you work it in to a interview somewhere in the SPD2 video!

Omg. This was the company I hated because their first board was a shitty board they were on instagram selling them to “kids” for $400. I kept warning those buyers that they were POS boards. lectric blocked me after a while because they advertised that they designed and engineered the whole board.

I literally have the founder’s (Levi?) college business project plan that said they were getting the board cheap and reselling for profit. melon board was the exact same. Business class planning

I just want to see you work it in to a interview somewhere in the SPD2 video!

You obviously got problems with reading

I dont think that the title and your whole post fits here since it is straight up saying “rebranding cheap boards from china”. I doubt that you are going to impress anyone here with your bulls**t

Apart from that, based on your kickstarter video

If you realize the OP is not Lectric who is your? or

…you say is not true…

…you are warping the truth…

and lastly @Martinsp you said:

I dont think that the title and your whole post fits here since it is straight up saying “rebranding cheap boards from china”. I doubt that you are going to impress anyone here with your bulls**t

sure seems like you are talking to NAF, and you didn’t mention “the company” but mentioned his post and tittle. Maybe you should edit you post if your meaning is not your written word?

where are you from Bro, I checked your profile but you didn’t give anything away… in the past I have asked people if english was there first language… or if they were drunk… neither has gone over well

(edit is your friend dude)

Cool, thanks for sharing. I would also be interested to find out what their typical customer might be.

At least looks like they are rolling grip tape themselves on the deck and checking that everything works.themselves, too.

It looked like they are using ebay esk8 substitute esc / the one that meepos.boards also tend to.use.

Would be cool to.find some.more media / info like this about other “esk8 producers”, the only other one which comes.to mind are the inboard when they debuted.on.shark.tank,.maybe evolve shares some info too about their.inside.processes but.other than that not sure

what their typical customer

I had a bunch of people messaging me with questions about the 1st gen boards when I was warning all his potential customers. I asked everyone of them their age when answering quesions (seems a bit creepy) but most were 13-15.

I told them that Lectric was selling “Chinese Clones” that can be had from Alibaba for about $300, then I told them about all the rebands of that board like the Backfire Falcon, Melonboard, LecDec, Luoov, etc. There’s a “Dr.Circuit” guy on YouTube that blew the ESCs of these boards quickly, but swapping to a VESC made it a good board. So I told all the kids about that extra $100 they will need to spend at some point.