I have a BMS with no C-, so only B- and P-, which means I will have to solder both the charger - and ESC - on the P- of the BMS. Is the best solution to solder both cables to the BMS or to solder one and then have a sort of Y connection a couple of cm after (hope this is clear…)?

For the sensor wires, is there any specific order for the connection to the cells or is that just to be able to identify a defaulting one more easily?

You can connect the negative charge cable either way. The balance wires must be connected in correct cell order. If you get it wrong you may permanently damage the bms

Ok, noted. There are no numbers on the wires coming from the BMS. So i just need to make sure the first one is connected to the cell that is the positive side of the battery, and then move along until I arrive at the cell with the main negative wire?

If you get it wrong you may permanently damage the bms

WILL permanenlty damage the BMS. You’ll have all that wiring done, and you’ll plug it up and see that nothing sparked and it will seem fine. Meanwhile the traces are heating up rapidly and as soon as you pick up the BMS (provided its heat shrinked) one or two resistors will melt off and stick to the heatshrink and if you’re lucky you won’t burn traces, but the board will be useless until the resistors are replaced or re-flowed. And most times that doesn’t even fix it because something else burned up and didn’t do it in an obvious way.

i have a bin of dead BMSs that i killed this way.

check your voltages on each balance lead to assure they are indeed sequential BEFORE plugging in the BMS. Do that 100% of the time and you will catch and fix errors before you cook off balance resistors.

@jga yep! there should be numbers screen printed right next to the pins. unless there is weird shit going on like in Evolves BMSs, pin one will go to the first positive after the negative side of the pack, then 2 to the second, three to the third… etc. The last pin will go to the same place your mains positive comes from but don’t tie it into the mains, solder it right next to it.

If i am using this BMS and wiring to 3x3s lipo’s then I am not going to use any of the ground wires on any of the batteries correct? Also the last wire that is going to go on the main line is it going to be the last red wire on the Positive end of the main battery terminal? This is the BMS i am using?

Following this diagram from @Namasaki I have updated my BMS wiring diagram to match the pad and pin locations on the actually BMS.

This will charge and discharge though the BMS correct??

That is correct Please note that with this bms, the E-switch must be on while charging

Will charger and charger plug be good enough to charge with? Also this switch can hook right up to the BMS power cables correct?

Find many great new & used options and get the best deals for 2 Pin Self Balancing Hoverboard Charging Port Power Button Repair Parts USA at the best online prices at eBay! Free shipping for many products!

Find many great new & used options and get the best deals for 36v Lithium Battery Charger for 2 Wheel Hoverboard Scooter Razor Swagtron T1 UL at the best online prices at eBay! Free shipping for many products!

Please note that with this bms, the E-switch must be on while charging

that’s why i just went with the modded vedder switches and dropped the BMSs with built-ins. So annoying.

To each his own I guess. Turning the board on to charge hasn’t bothered me.

you totally should make a YouTube tutorial on battery build, BMS with LCD, charge port and power button. I would love to learn the process from professor Damon

well there’s this thing that the motors do when the board’s on the the remote is off… it doesn’t do it when reverse is disabled but the motors sit there and tick-n-twitch. it drove me nuts so bad that i swore off reverse and swore off bms’s with built ins.

i know i know… i’m just a picky little bastard

I’ve never used reverse. I have gotten twitching with remote off when down by the coast (maybe some interference) I don’t seem to have any twitching when at home. 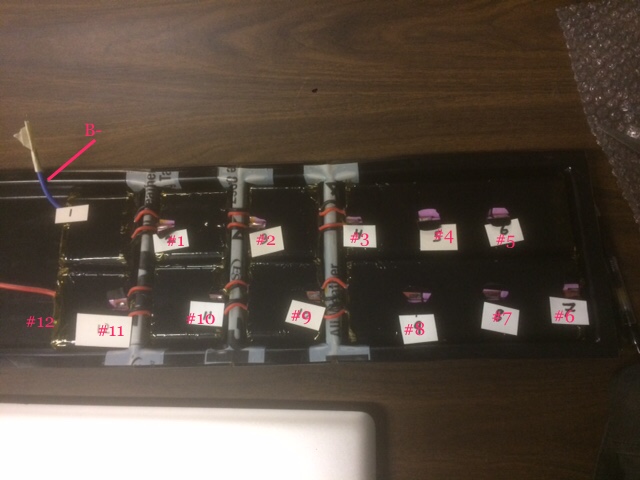 My ordering was corrected for me…

I have a question that’s relevant to this thread, as I’m about to start soldering my BMS connections. I was told that I should connect the B- and P- points before making the sensor connection. My plan was to do a bullet connection between the segment of wire already connected to the battery and one running to the BMS that I will solder.

My assumption is this is fine as there wouldn’t be any completed circuits until the connections are made, but as I’m new confirmation feels appropriate. Thanks!

Why don’t you have a wire going the positive side of the cell where the main B- lead is? Or maybe it’s just the marking that is not at the right place as it gives the impression you have two on the B+

i would run all of the balance leads first, before connecting to the BMS. Then use a volt meter to make sure you have them in the proper order.

Then solder the pack into the BMS, then connect the balance leads. Then check the voltage again, and also to be triple sure, hold the bms for a few minutes and make sure its not getting warm.

I do all of those things. I measure, i measure again, then i feel it and smell it. You just never know how something will go wrong so try to involve all of your senses, not just your eyes and logic centers.

with the correct instruction.

Thanks @longhairedboy! any confirmation on the order on the pack and the question brought up by @jga?

if you’re using the BMSs from batterysupports.com, the balance lead ordering will start at 1 at the first positive after the main negative.

then if its a 12S, number 12 balance lead will be on the same metal as the positive terminal.