I have a vedder anti-spark currently, and I am moderately shook by the historically poor performance of these things. 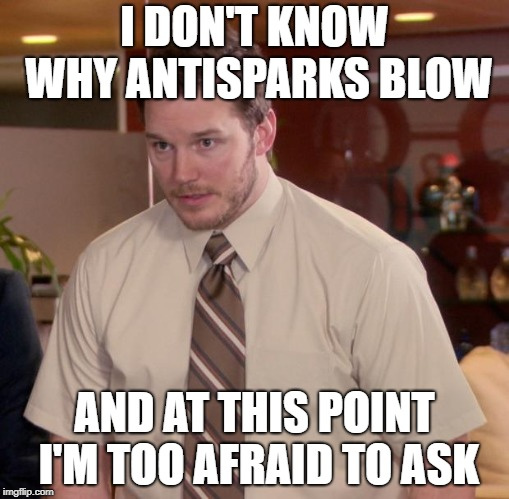 Besides any obvious user error, I’ve seen some blaming the initial current being too much to handle for the mosfets, but it seems the vedder design should have a sufficient current inrush limiter. At least the multisim circuit simulation thinks so.

And with the mosfets on my current version rated for 75V and 240A each, those shouldn’t be a problem either.

Is the design itself not robust enough, or are there a lot of cheapo chinese fakes or something?

Poor shitty ass mosfets on a lot of them.

They blow because they are operating in linear mode during inrush. It’s a design limitation on every one I’ve seen so far except one.

Imagine a FET is a resistor with a variable resistance. When it’s “off” the resistance is [nearly] infinity and when it’s “on” the resistance is [nearly] zero. That’s all fine and dandy until you add capacitors to the load, like the filter capacitors on VESC and other ESCs. Right when it turns on, it’s effectively a momentary short circuit with [not really…] infinite current because the capacitors are empty. So what the antisparks do is they limit inrush current by turning on not from zero to full blast, but gradually over several milliseconds they ramp from [nearly] infinity to [nearly] zero ohms. It’s this period during the ramp that is the problem, the FET itself is taking almost the entire load due to Ohm’s law because the capacitors have effectively zero resistance to inrush. It’s said to be operating in “linear” or analog mode at this point, as opposed to “digital” mode where everything is either on or off with no in-between. This is extremely stressful to the junctions inside the FET and technically exceeding the design limitations for a very brief period of time. Each time it’s powered-on, it’s taking a tiny bit of damage.

The way to ameliorate this is much the same way a loopkey works – you have a “precharge” circuit where the nonzero inrush-limiting resistance is provided by an actual discrete resistor instead of the FET junction itself. So you have one FET with a resistor in series, typically a 5.6 ohm resistor, that is separate from the one or more FETs on the main power switch.

So in order of operation, you’d have a single FET turn fully on [nearly] instantaneously (digitally) with a resistor in series to charge the filter capacitors, then once the output voltage approached the supply voltage (meaning the capacitors are nearing full charge) then the main FET(s) turn on [nearly] instantaneously (digitally) to supply high-current power to the system. This is never operating in “linear” mode but is “fully digital” and will not suffer the incessant failures that plague the inrush-limiting Vedder design. The power limiting and heating is moved to a discrete resistor instead of burning off the energy inside the FET junction itself, which stays cool during inrush.

AS switches need a precharhe circuit to not blow the fets. That doesn’t exist yet. The best you can do is an XT90-s between the battery and the switch. That won’t save it forever, but it helps.

ah great explanation, I didn’t realize the fets shouldn’t be used in linear mode. I wonder if a traditional current inrush limiter like a thermistor could be used. I guess I would classify that as a design flaw. Time to do more investigating on this, thanks @b264 and @mmaner

So the TL;DR is it’s a design problem. We need digital switches with precharge instead of analog ones with inrush limiting.

Do people do this? Install an antisparks XT90 (permanently?) Just before the antispark switch?

The best you can do

You can do better than that – you can put a momentary pushbutton switch in series with a 5W 10 ohm resistor connected around the antispark on the negative side. If you push the button right before you turn it on, you won’t damage the antispark switch when you do turn it on.

Or even better than that, use loopkeys until you have a fully digital antispark

I always put an XT90-S on my battery packs. I can’t prove it helps, but it doesn’t hurt and I ‘think’ it helps.

I mean, it’s 3 bucks for a little insurance.

so a cheap simple solution would be to use a 555 timer as a delay for the main MOSFET’s to turn on?

The cheapest and simplest solution is to use an XT90S loopkey.

If roll-to-start is something you absolutely must have, I would use an MCU like the ATtiny25, a tiny regulator, and some logic-level low-Rds MOSFETs, but this will involve some low-level code writing and specialized hardware to write the firmware to the MCU.

Correct; If the e-switch is on the ESC side of the filter capacitors instead of the battery side, then an analog inrush limiter or no inrush limiter at all will be sufficient. However, then you have the leakage current of the filter caps as a constant draw even while powered-down, disconnecting power from the ESC to work on something does not power it down (i.e. it can still shock you), and if any one of the 3 devices break, you have to replace all 3.

Also in lieu of roll-to-start, you can just leave your board on. It could probably idle for months or more on a full charge. (If there aren’t lights and stuff on, just the ESCs and receiver) Turning it off would be prudent if it were to be stored or something. You could turn the remote off instead. It’s a design limitation on every one I’ve seen so far except one.

That’s the one I was referring to above