If I ride my dual motors Loaded Vanguard with 10S4P after a full charge the VESC reboots itself at braking, if I ride it until the battery decreases at 95% the issue is gone and braking is perfect.

I’m guessing the regenerative breaking increases the voltage of the pack over a given limit so it cuts outs in order keep it safe.

What parameter should I change in the VESC to fix this issue?

But max battery voltage to 56V

Hmmmm ? I had same issue but my Max was at 43v before i put it higher .

not sure what the prob is now ?

Your battery max is very low. What batteries are you running?

So, do you suggest to leave the value at 57V?

I’m runing 2 VESC and the battery max discharge capacity for my Samsung 25R 10S4P should be 80A (40A or each VESC), as suggested by @ackmaniac I set this Batt Max to 30A 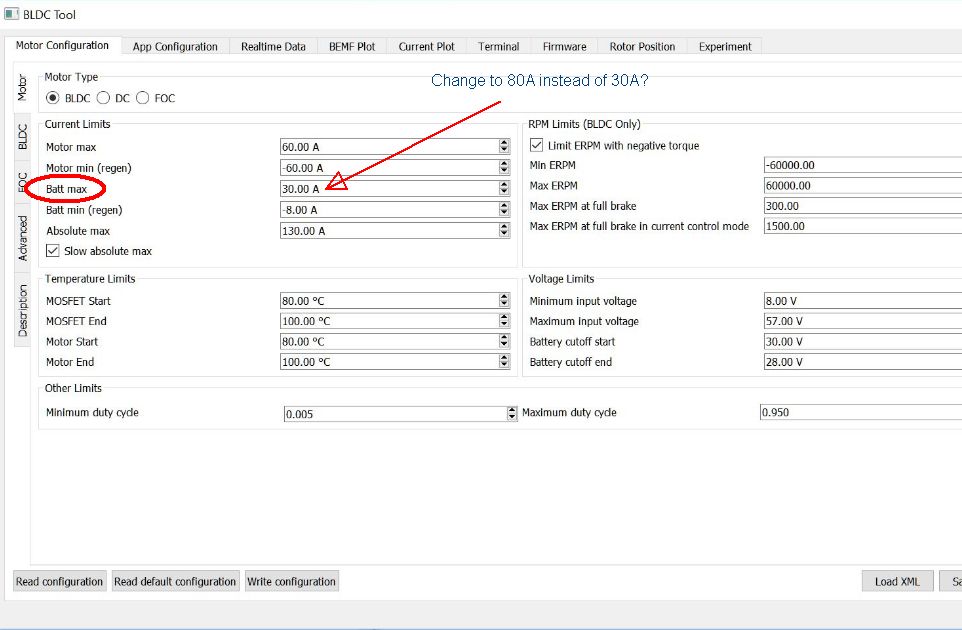 Oh sorry, I didn’t know you were running two vesc… You could change it to 40 on each vesc unless your BMS is 60 amp

BMS is 60A, do you think this could be causing the cutting out issue?

Your should reduce the amount of current allowed to be recycled back into your battery. This can casue voltage spikes and trigger the over voltage, also some BMS do not allow any regenerative braking beacuse it thinks it is a short, depending on your bms. My recommendation is to lower your regeneration to 10 amps. I personally use this and runs a 12s4p effectively.

That would mean 5 per vesc, correct @Alextech?

Leave your battery max at 30 then. That wont be causing the issues, it is likely your battery regen as Alex explained.

Which BMS do you have in between?

When the VESC drops out during braking with a fully charged battery then the VESCs try to get rid of the power by charging it into the battery. But the BMS in between says no no no no, because for the BMS the Battery is already full. So the VESC can’t get rid of the power and shuts down for safety reasons. Otherwise it would would overheat in a couple of seconds (maybe even less than a second). So i recommend to bypass the BMS for discharging and charging by the VESC and only use it for charging with a charger. This doesn’t count for a smart BMS which can handle the amps even at a full charge. But it seems that you don’t have one of those. After that you can set the battery min value to the value you like. Officially the manufacturer says 4 A maximum for each cell. So 16 A in total for your 4P Battery. But you can also go higher. Because this is only if you would charge it contentiously with these amps. But on the board you reach these values only when you brake very hard at full speed. And then only for a couple of seconds (maybe not even a second). And i think it is better to have more brake power when something goes wrong on the streets instead of being worried that the cells might get a bit stressed. And there are also articles where they say that short charge bursts are also good for the cell. Continuous charging at a high amperage damages the cells more.

Can you link to said article that says charging at bursts higher than your max continuous in spec sheet is good for your cells? I call bs knowing what I know about how the chemistry in 18650 cells work.

@ackmaniac the BMS I have is the Battery Support 10S 60A

Is there anyway to avoid the cutoff by changing VESC settings?, I would not like to change the wiring of the battery at this point, everything is wrapped up and ready, however if there is nothing we could do software wise, I’ll work on the wiring

No you can’t change the setting of the vesc without risk of blowing it… the drv is only rated 60v.