I made a battery where wrong polarity. When I connected the battery to Vesc, the connectors were blown. After that I made the correct polarization, but the radio control does not work. When I power the Vesc up, the red LED flashes three times, then blue and green (on top) remains on. When I plug in my transmitter and pull the trigger, Vesc does not respond, but when I connect Vesc to my computer and click on the “Start detection” button, the motor starts to spin. What should I do to solve this problem if possible?

Does the receiver power on? some LED or something on it should turn on when it gets power

Yes. The receiver is working correctly. 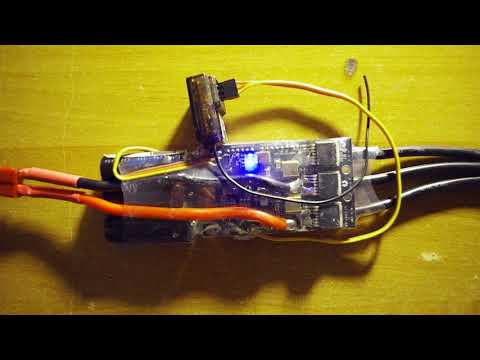 Have you tried to look at it in the BLDC tool in the PPM tab? it might not get the input…

But i wrote the default configuration, and everything should work.

And yes, in the PPM tab there ins’t any input signals

It is showing 50%, but when I pull the trigger it isn’t react.

Did you turn on ppm? Default only has uart turned on

OMG. I’m so stupid, thanks for help, it is working now.

So you are telling us, that the VESC and receiver actually survived wrong polarity

Yes, the VESC survived wrong polarity from 6s 60A battery pack. I’m very lucky guy. This is connector who were take the wrong polarity: Lucky it was that connecter, an xt60/90 wouldnt have melted that quick and fried the vesc

I’ve done the same thing before, billowed out the magic smoke for a good 5 seconds before I burned my fingers and unplugged the battery. That vesc is still working to this day. The battery however…

Edit: mine had xt60s the only thing that happened other than the connectors melting, was that both of my lipos now have cells at .34 volts

Whoa that’s pretty amazing that they can survive that. Not that I intend to test it myself, but it always feels like if electronics don’t have reverse polarisation protection they’ll instantly die from it. Apparently not, though

That closest I’ve come to reversing my battery leads so far has been accidentally attempting to plug in a 2 x 3S to 1 x 6S adapter the opposite way to the discharge leads. It made a big fat CRACK with a blinding flash and burnt one of the JST connector pins but everything is still fine and the battery cells don’t seem hurt, so all is well

Lucky it was that connecter, an xt60/90 wouldnt have melted that quick and fried the vesc

nope, i vaporised a xt60 in exact the same way, vesc was still working

Oh believe me, I jumped about 10 feet then froze. That’s why I took so long