Yes, you’re right - it seems that I was just mixing it up with the old version somehow.

Hi Jacobbloy, Vedder just updated to v2.4 - any chance you can send out the OSX updates?

Can Is FOC ready in 2.3? I can see some motor detection dialogue boxes in the tab but Im keen to get some suggestions on how to configure it for the Enertion r-spec 190kv motors

I downloaded the latest bldc tool for Windows which I got somewhere on this site and I’ve been running basic bldc. It has a FOC tab under the motor section and it looks a lot like the bldc tab with what look like tests that can have the results applied. What to do? Would my multimeter be good for measuring resistance or is it all done on the pc? I’m worried I’ll fry something at worst or have not ideal settings at best.
Anyone have advice? The motors are 100kv

I had a chance to run the foc tests and apply them to my pneumatic. WOW! SUPER quiet. Almost no cogging from a standstill. This is with 150mm tires. Really impressive.
Running 10s and two 245kv 63mm motors.

Can you guys imagine FOC on hub motors! This has some serious potential for sneaky undercover shiz!

I find with my hub motors even using the bldc program it’s really quiet. I like the noise actually. Should try foc in a day or two 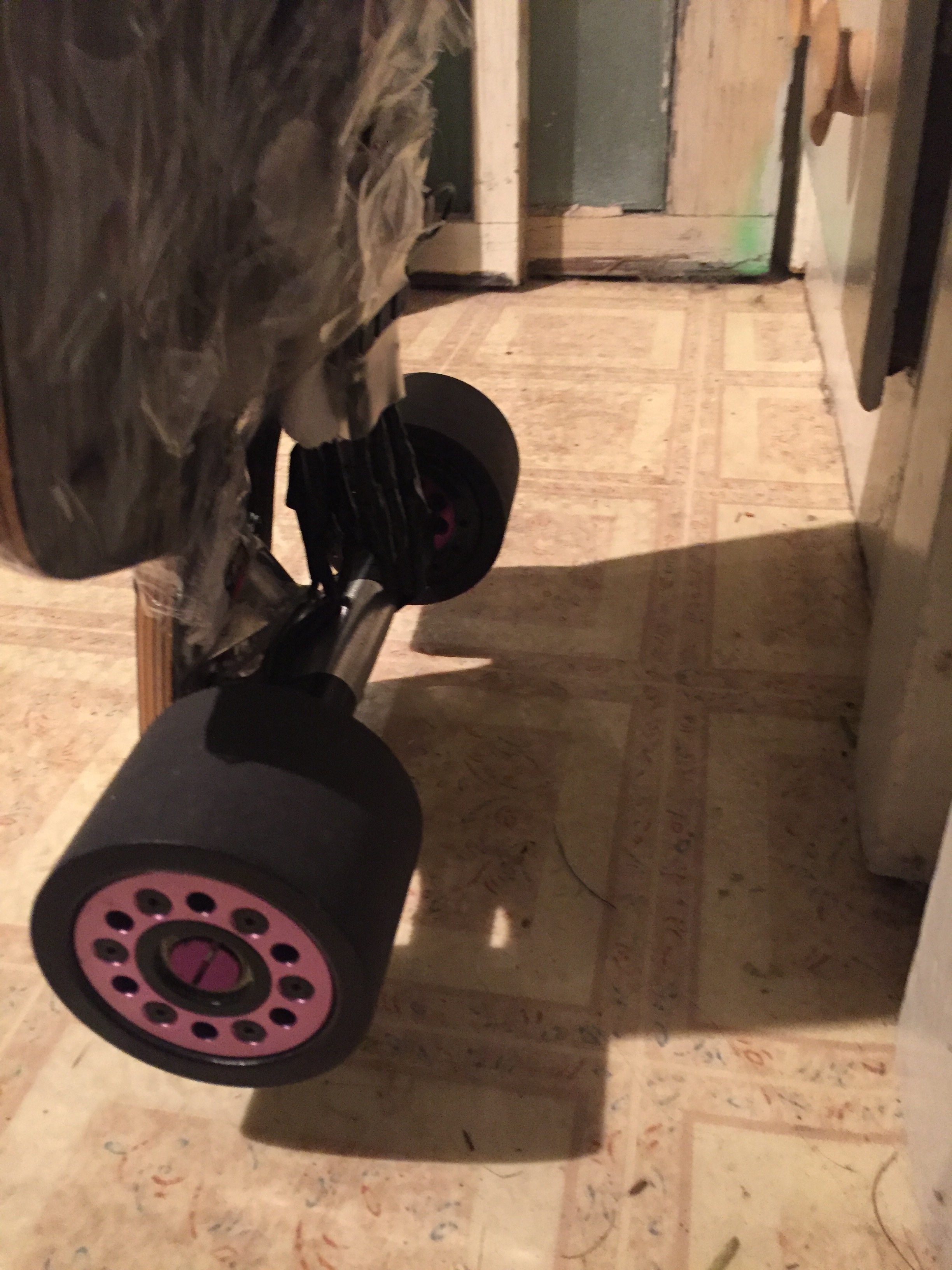 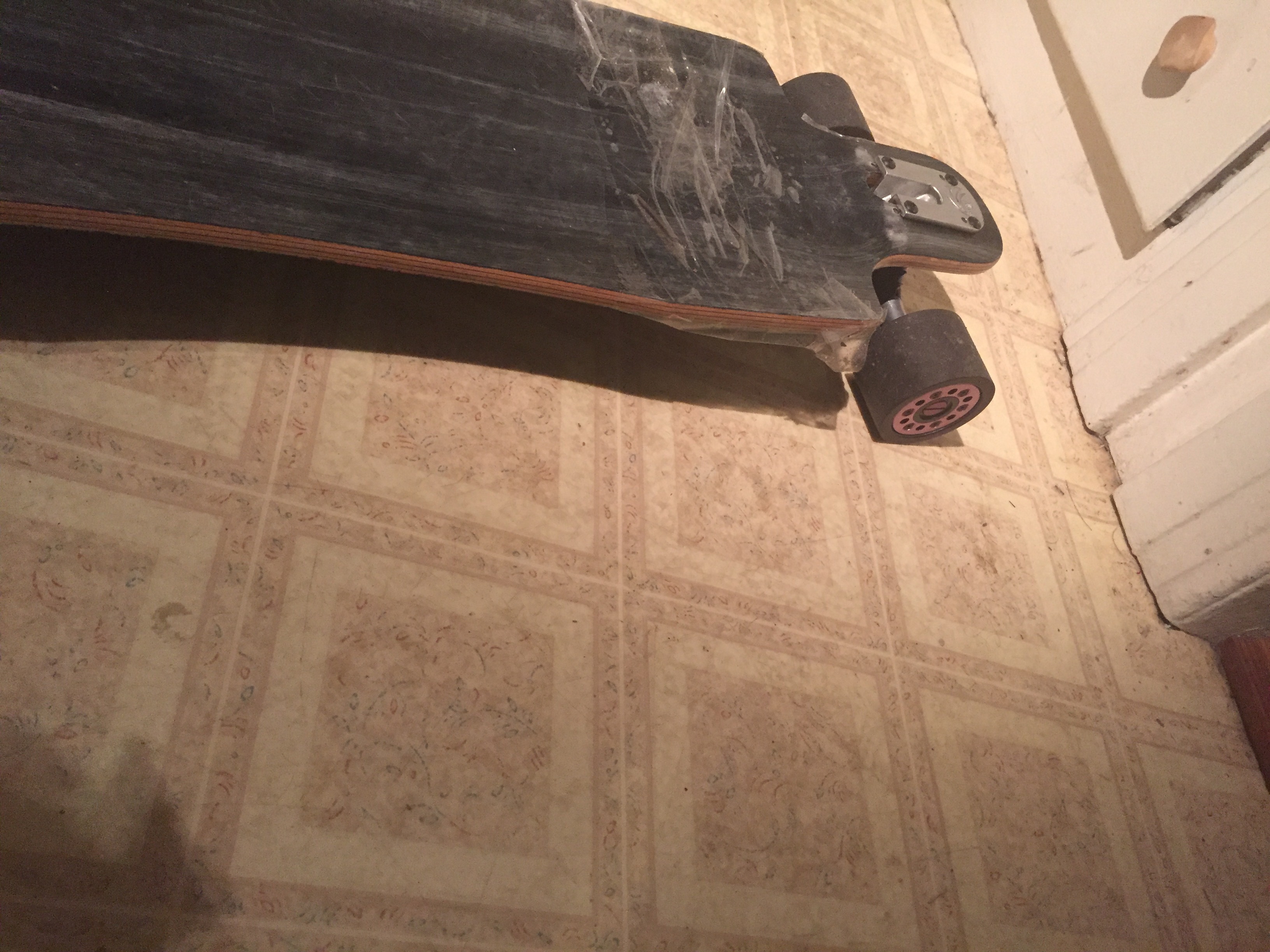 @Hummie
What company makes those hub motors? I haven’t seen them before and they look pretty nice.

I also like the noise but silence might be even more enjoyable. Just curious… Where do you get those cool hub motors?

We are going to sell them. There are only four made at this point. I promised people on endless-sphere I’d sell them for the manufacturing cost for the first 100. I got the inspiration to make them there it was kind of a community project. Maybe hundred bucks as we are waiting on a good wheel manufacturer to give us a price for the rubber so I’m not casting second-rate rubber. After those hundred maybe 150 each I’ll post up a video here in two days 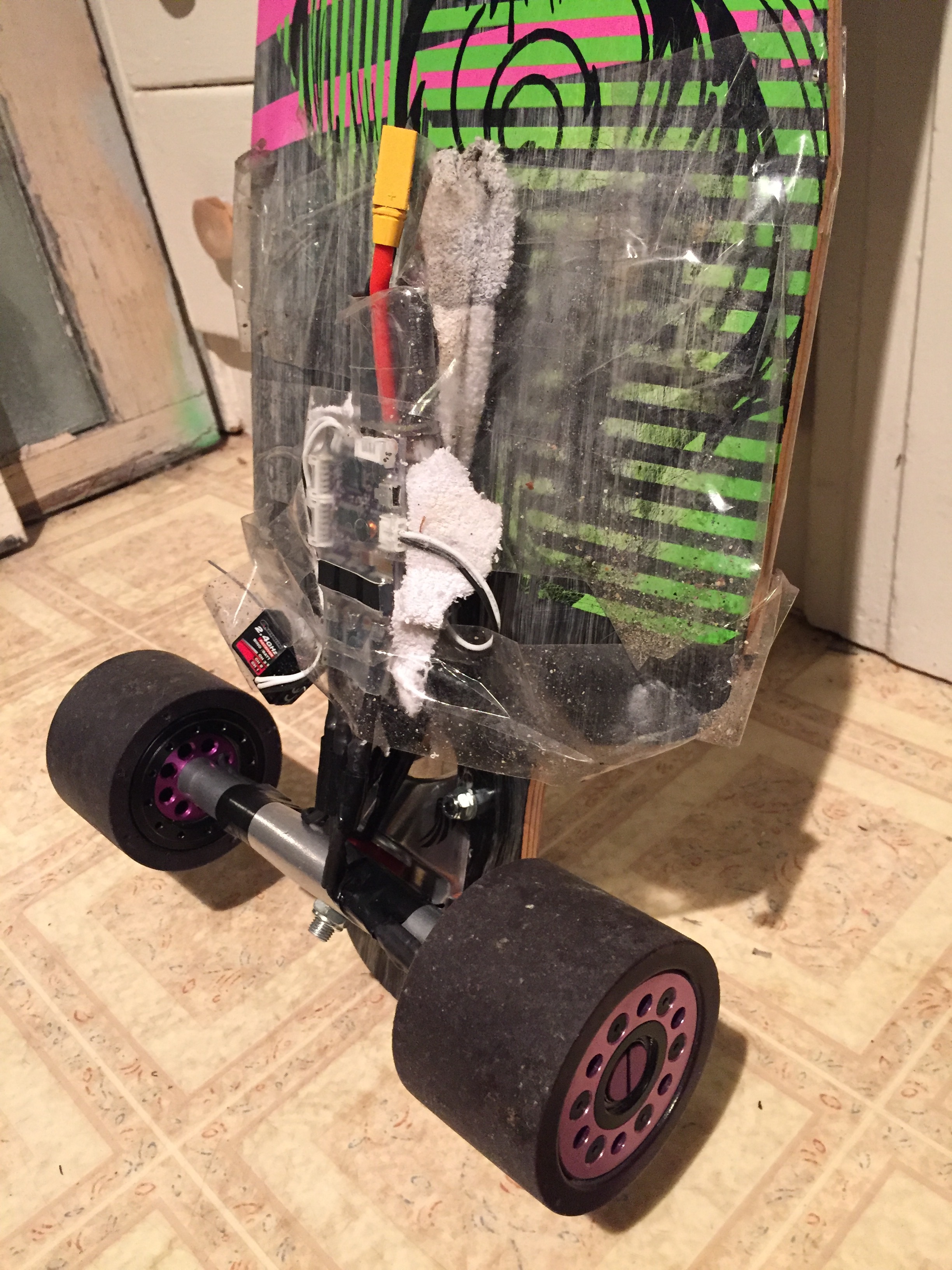 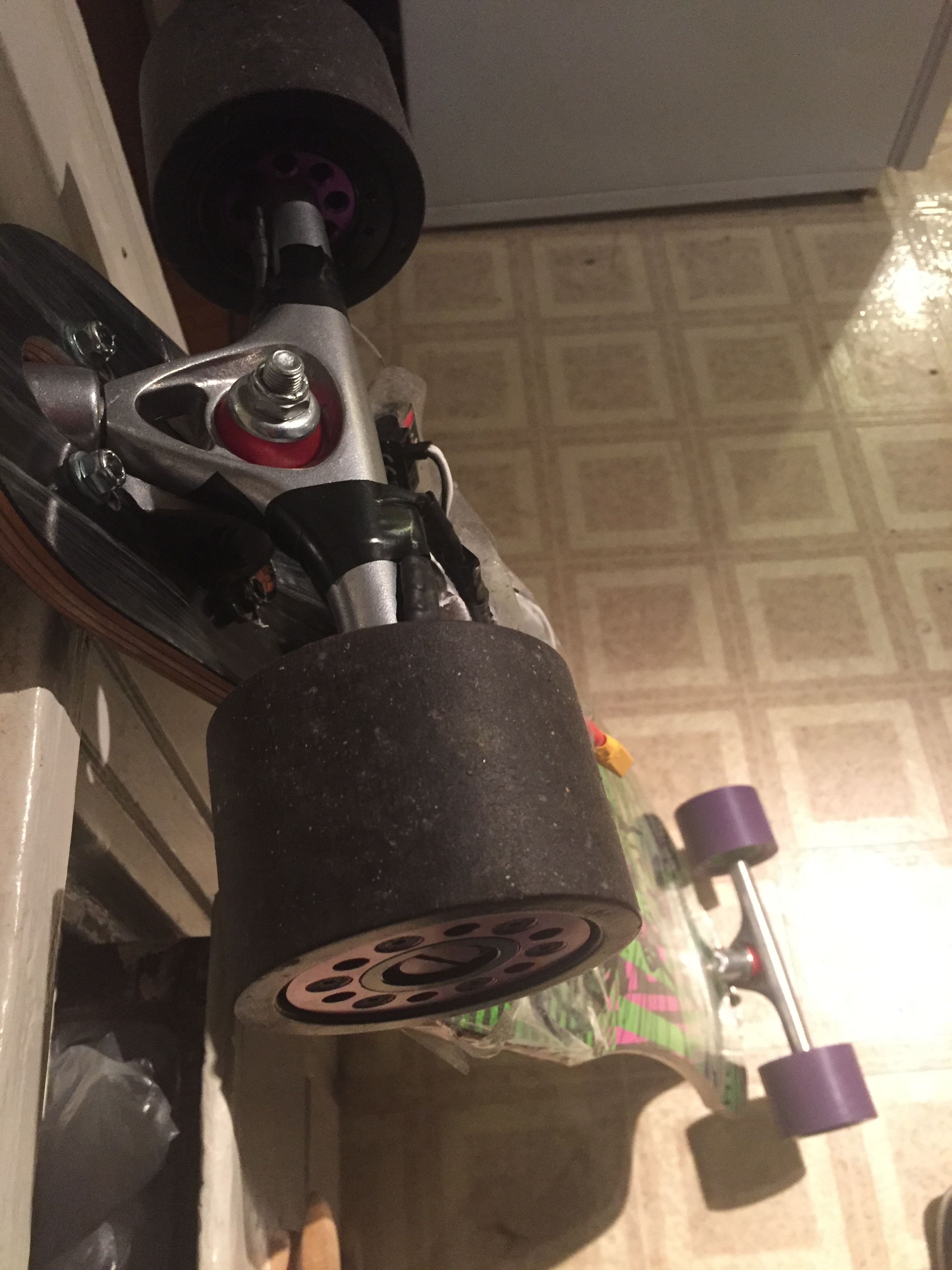 What I still want to know, in a nutshell, is: is there an overall benefit of FOC for electric skateboard drives? For sure, I get that we get a quieter ride, but is this the only benefit? As far as I understand, FOC aims to linearlize the motor, and allow us to get max torque at zero speed. Does this factor in to reality. Are there any comprehensive comparisons between FOC and BLDC mode on the VESC to date? It would be really great if someone could do some control tests on a conventional setup (like 10s dual drive 190kv), testing flat land constant velocity performance, uphill constant velocity performance, flat land acceleration from stop, uphill acceleration from stop and then some braking tests, maybe flat land braking from 20km/h, and downhill braking. Would be really interesting to see those results and conclude on whether FOC is useful or not, in terms of performance. I’m still waiting for my VESCs from Enertion, and will happily do those sorts of tests for myself when I get them and post the results unless anyone else is keen to do them sooner?

I get more power on bldc but the noise, while it sounds kinda nice like a jet engine I still prefer the silence. I read the FOC is also more efficient. I’ve never done testing but will do a bit today if the weather holds.

I know alot of members are still confused the real difference between FOC and BLDC mode within their VESC or any other ESC that performs such commutation. What are known to most are FOC mode is much more quite than BLDC mode which is true. I am personally not an electrician, just normal person like all of you and I am going to tell you by diagram below the differences. BLDC Commutation [image] Trapezoidal Commutation (FOC) [image] Sinusuidal Commutation (FOC) [image] S…

This should answer some difficulties in understanding what is FOC

Saw that @laurnts. I understand what FOC is, but what we want to know is, practically, does it work for us and what are the advantages/drawbacks as proven by testing? There is some science that needs doing.

Saw that @laurnts. I understand what FOC is, but what we want to know is, practically, does it work for us and what are the advantages/drawbacks as proven by testing?

There have been posts about that in the past.
I can’t find the exact post right now but even Vedder himself stated that the advantages for an e-board may be limited to just the silent running. In that post he also states increased heating of the MOSFETS.

I’d also like to hear from an actual user what else is better with FOC compared to BLDC.

FOC has more torque from standstill?

Its hard to tell without testing equipments to understand FOC performance. I am personally not an electrician, so I couldn’t tell alot about it. I think others could have tried, but personally I don’t have the knowledge / background / testing tools to conduct the ideal test.

Its understandable that FOC advantage for eBoard is noticeably significant on silent running compared to others. Because lets say to test efficiency wise, it needs to be run for many miles under strict control. Yet the differences could only be ranging from 1% to around 10%, which is not alot for short distance commuter unlike cars in which can travel 10.000km per year.

Since FOC is modulating and not on - off switching, its understandable that is running hotter (phases never power down). In general the whole VESC should be warmer because more calculations are needed / involved. But how warm compared to BLDC could also be not that significant since.

But more torque on lower speed is something I could feel and logically right. Because it provides each ABC phases the right current needed for each rotor position, hence it works so well for torqueing the hell out of motor. However FOC is in a waveform, the amplitude of phases peak point is reduced, thats why less top speed.

The exact detail I can’t tell really, should ask Vedder for that.

I didn’t do any testing other than riding around again. In my experience riding the vesc I’ve been on bldc maybe 2 percent of the time and I switched to FOC quickly both times I tried because I’ve been looking for a quiet ride as long as the power is still largely there and it is. At slow speed the bldc tool doesn’t sound nice. At high speed it kinda does
For me the fets don’t even get warm. The vesc may supposedly be more inefficient but I read the motor is running more efficiently and the system as a whole is therefore more efficient.
I’ve read it can be dangerous to the vesc but I haven’t had a problem on any of the four vescs I use it.
I’d like to do some testing though and will have to get another watt meter as my last broke. What kind of test? Top speed and distance on one amp hour at 20mph are simple enough.
Busted my can bus wire connection and waiting for another but if if I can get the hot glue to solve it again I’ll at least steal my gf phone for some max speeds