I have been having trouble getting a really smooth acceleration from my board, something that does not scare the poop out of me with acceleration but still has the power for a few steep hills at low speed which are part of my commute. Can I have booth?

My setup is somewhat unusual. - Dual 5060 270kv motors. Build quality not the best but they work. - 12s Lipo, 8ah. 350wh. From two 6s packs. Turnigy nano tech. Hobbyking does not even sell one this large any more, I got these from a friends para-motor project. - 4:1 gearing. 3D printed gears I designed myself. This ratio is for reducing motor load and giving me a theoretical top speed of 40kph. And yes I have ERPM limits too, that seems to work perfectly. - 97mm wheels. - GT2B controller in mini buffalo case. *before the safety police come out, I have used lipo for years with RC models, I have a separate monitor for the voltage and have plently experience building systems that don’t burn down.

At the moment the bottle neck in the system is the cheap motors when ambient is over 35c and rider skill. Batteries are always at ambient and vesc’s get slightly warm.

My board far more power and acceleration than I can comfortably use, and the other issue is when I set the vesc for more power I have to use less throttle throw to control it. I heard the watt mode firmware is meant to fix this but I need to buy a programmer before I can install that due to no bootloader on my maytech vesc’s.

So its v2.18 current mode tuning for now.

I did find a setting that has nice smooth acceleration but this came with two other issues. Above 50% speed there is some un-expected acceleration when under medium load, to ride around this I only use about 50% of the throttle throw and just accelerate to top speed a bit slower. - This setting was motor 30amp and battery 20amp. X two vesc’s

So Im thinking of trying the opposite, just to see what the affect is, put the motor limit back down to 30a and increase the battery to 40a.

***One extra issue that is un-related to acceleration I just experienced. Braking at full speed down hill. I was going down a gentle hill at max speed then applying a modest amount of brake, the brake would come on for a couple of seconds then switch off, so I kept pulsing it until I was going slow enough to jump off and run. The battery was at 50% level so its not over charging, maybe my battery regen limit is too low? its set at -25a

I’m open to other suggestions.

*Devin we have seen your math in several threads so we don’t need it again here.

While it did give me more low end power it did not help my other issues. I’d recommend keeping the motor amps relatively high so you don’t run into the sudden acceleration that occurs when your motor max supersedes the battery max, as well as lowering your battery amps.

Try 40ish motor amps and 10ish battery amps. If you don’t have enough power slowly increase battery amps until it feels right, and if you run into the sudden acceleration raise the motor amps as well.

EDIT: Also I could be wrong about this but I heard somewhere that the min ERPM will cut out the motor when its reached. It would make sense that this is why your brakes are cutting out, however I don’t know if lowering your min ERPM could potentially damage the VESC. Since you have such high gearing it doesn’t take much speed to reach your ERPM limit.

Your braking issue could still be you hitting the amp limit on charge, I dont know why it would completely disable braking instead of just limiting it…

Thanks, seems logical. I might give that a go with lower battery limit.

Luckily I was going down a gentle hill and not a steep one, its the kind of issue I don’t really want to spend time testing as its dangerous.

I would not lower that limit! 25A is already a 3C charge. Any higher and you might damage your LiPos

it might be too late. its a dual so 25A each! over 6C charge that is way too high even for nano tech.

Thanks for the concern, but I’m not too worried as this only happens for a very short amount of time, not enough to warm the batteries up. Heat is the main killer and also the danger. If I was coming down a very long and steep hill for like 30 mins it might be an issue. Luckily none of those hills on my commute

They are also advertised as 5c charge. ohh yeah I didn’t remember to times it by 2. I was running 6s at first to get used to the board. And I know my per cell limits are a bit too low but I have a separate system to monitor the individual cell voltage, I don’t rely on the vesc for that.

Ok going out to test 10amp max battery while leaving motor at 50. And adjusted my min battery voltage cut off. But as I said I dont rely on the vesc for this function. 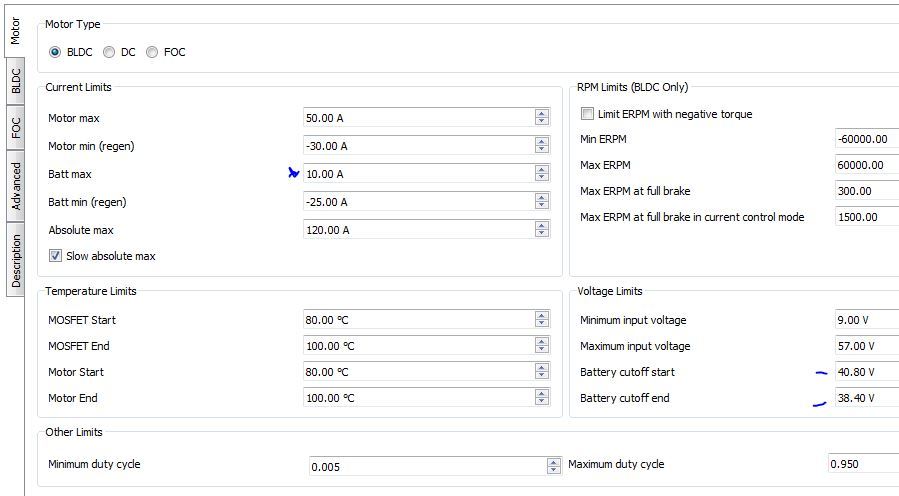 25 posts were split to a new topic: Linear Acceleration and VECS Parameter Calculations

OK, but please don’t turn this thread into one of the others here with walls of your text and math equations. If you really need to do that PM them to me. Something short and concise here will be fine. Also this thread is for ride-ability of my over powered board I dont need or want more low end power except in a hill climb scenario. Results are 0.2386 ohms.

Done a short test on my lunch break, it is more controllable than the 20 amp limit. I feels like more power than my first setting of 30 motor 20 battery. Somewhat between the two. There is still the acceleration surge at speed but its a little less abrupt. Needs some more ridding to really feel it out.

This might be crazy but I was thinking a future vesc could have a tilt sensor so it could measure the slope angle when going up a hill then give you more power in a sort of hill climb mode, while still being low power on the flats. That would be cool!

OK, but please don’t turn this thread into one of the others here with walls of your text and math equations.

@Irdesigns do you want me to split this thread so that you can follow your original thought? There seems to be a divergence of topics here. We can have the others continue in a new thread…

How did I know it would get out of hand?

hahah. The subject is interesting but somewhat of a tangent to the original subject.

But i also have no explanation for your dropout during braking. Could it be that you have a BMS in between and that the BMS maybe cuts off because of a too high voltage during braking.BTW you can also raise your motor min to -60 if you want more brake power.

No BMS, actually nothing between the battery and the vesc except some XT90 plugs. I have the battery monitor from the balance plugs.

My theories are either the ERPM limit somehow disables braking OR could the motors be generating too high of a voltage, like over 57v which would trigger some protection?