99.9% of my build done, Vescs programmed, everything working, then I went to the bathroom and came back and found that the USB port on both vescs were burning hot, as they burned my finger. There are no leds on either Vesc and the motor doesn’t spin but the light on my receiver lights up so I know they are getting power. Any thoughts?

Also I am now noting that the drv chips on both vescs are hot, $&@#!!!. But that still doesn’t explain why the vescs don’t power on or connect to Vesc tool. They are both 4.12 from @torqueboards

Is the bleu light on ?

No, no lights at all on the Vesc… I believe I will be needing your repair service lol

Yes It is most likely the can transceiver who blowup

Ok, here is a pic, the three circled components are the ones that get really hot. I can pick out the drv chip but I’m assuming that the top chip is the can transceiver? 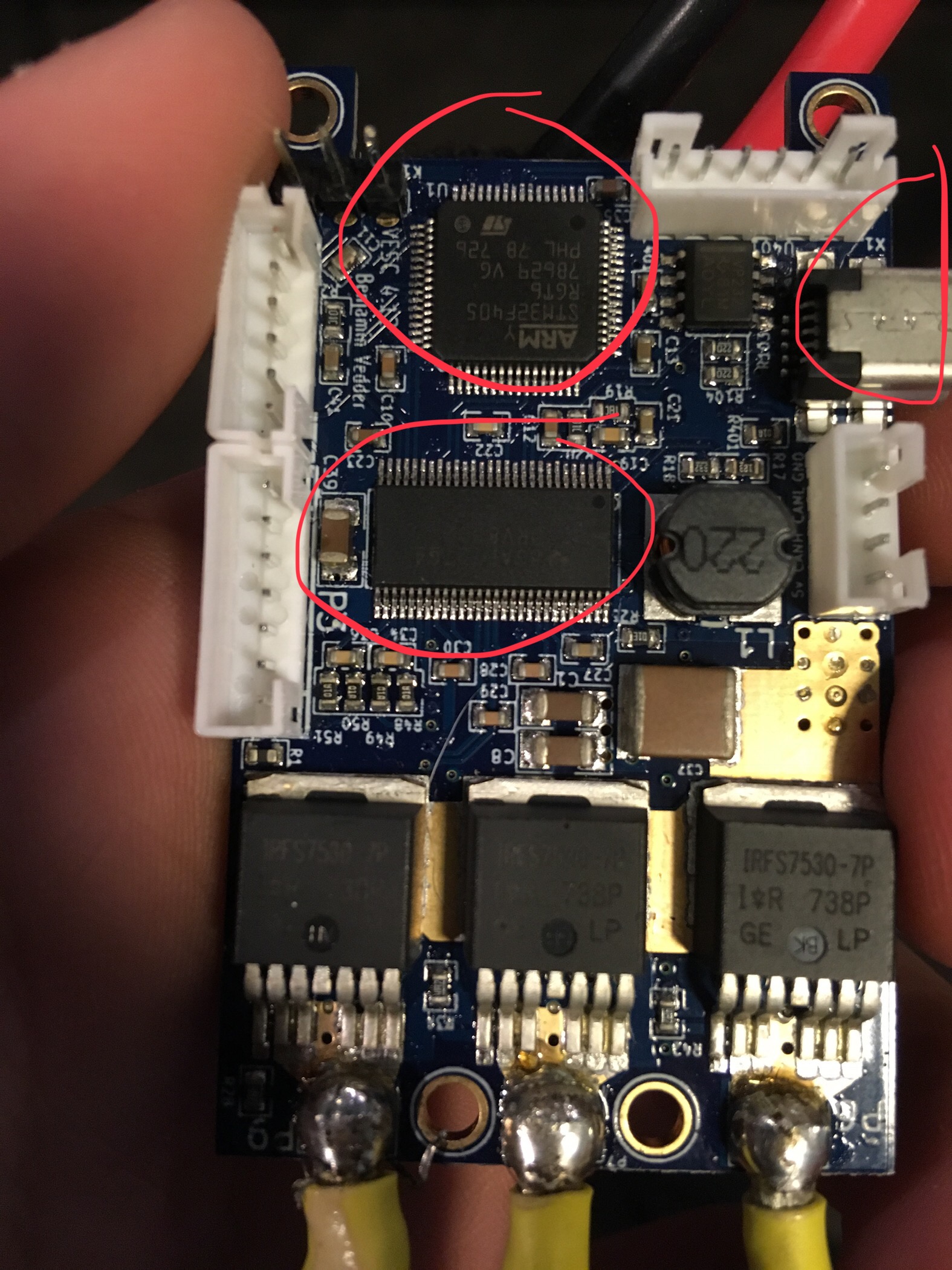 It sounds like a short on your 5V power supply rails

The top chip is the MCU

What brand is the VESC? Where did it come from?

Torqueboards, 4.12. I was using it with canbus, but there were no sparks or signs of anything going wrong

To be sure you can you check this

Thanks for the info, is there anything that could be causing this that could be an easy fix, cause tbh I’m pretty much out of funds

I’ll tag @b264 also because he was here earlier too

You can always remove the 2 CAN transceiver chip and use split PPM configuration.

@JohnnyMeduse Sweet! So I would de solder the can trasciever and run the vescs in ppm? Are there any side affects or error codes I should know about?

Edit: where is the can transceiver on the Vesc? lol 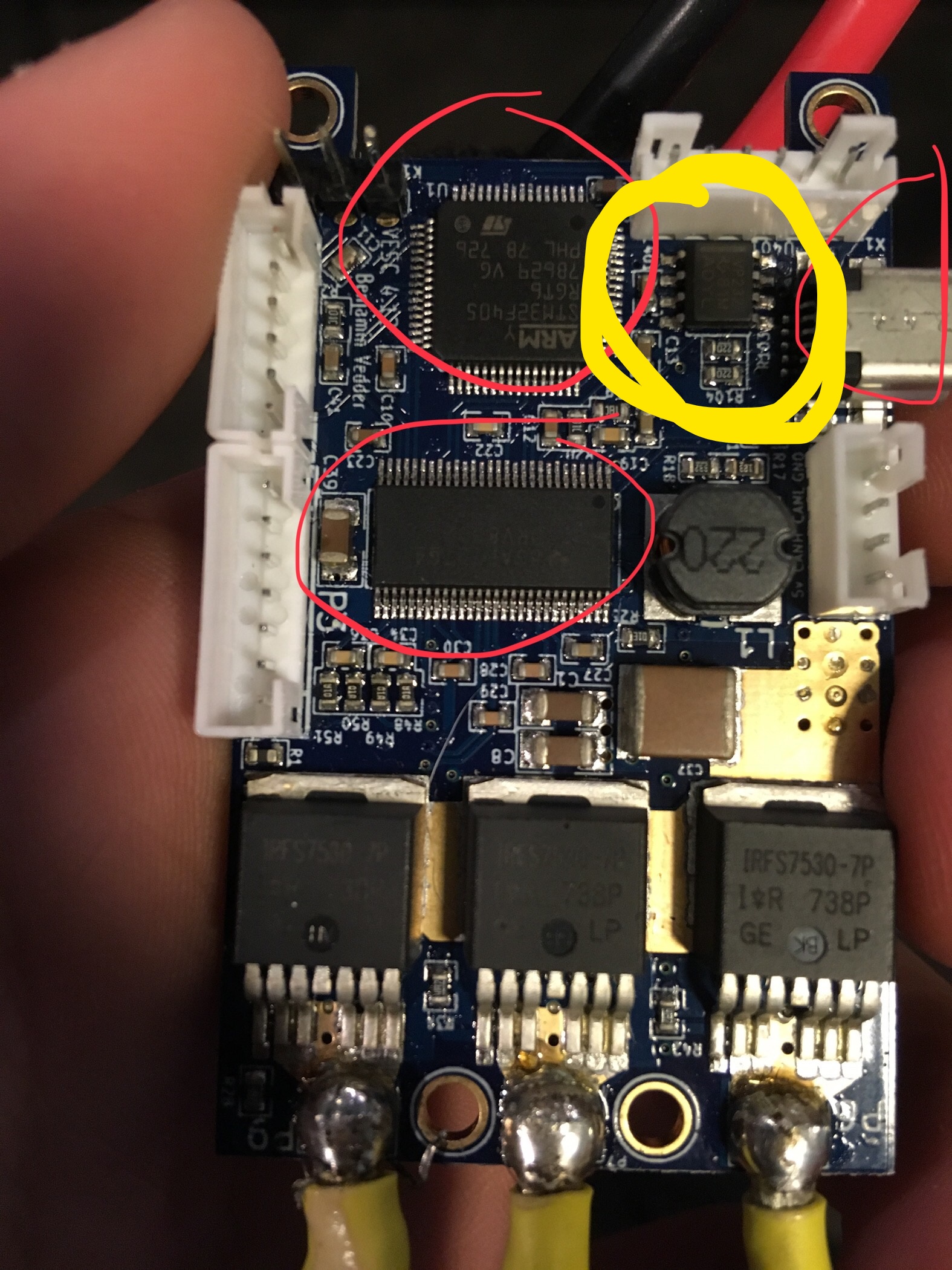 This one in yellow,

No there should not have any error code after.

Hello, sorry to summon you again @JohnnyMeduse but I removed the can chip from both vescs and one works fine, but the other I programmed regularly and it barely stutters and the yellow led on the bottom flickers really fast. Any thoughts on that?

That really weird, it could be that something else as been damage… Can you post pic or video of it?

@JohnnyMeduse It won’t let me upload a video from my phone, but here is a photo 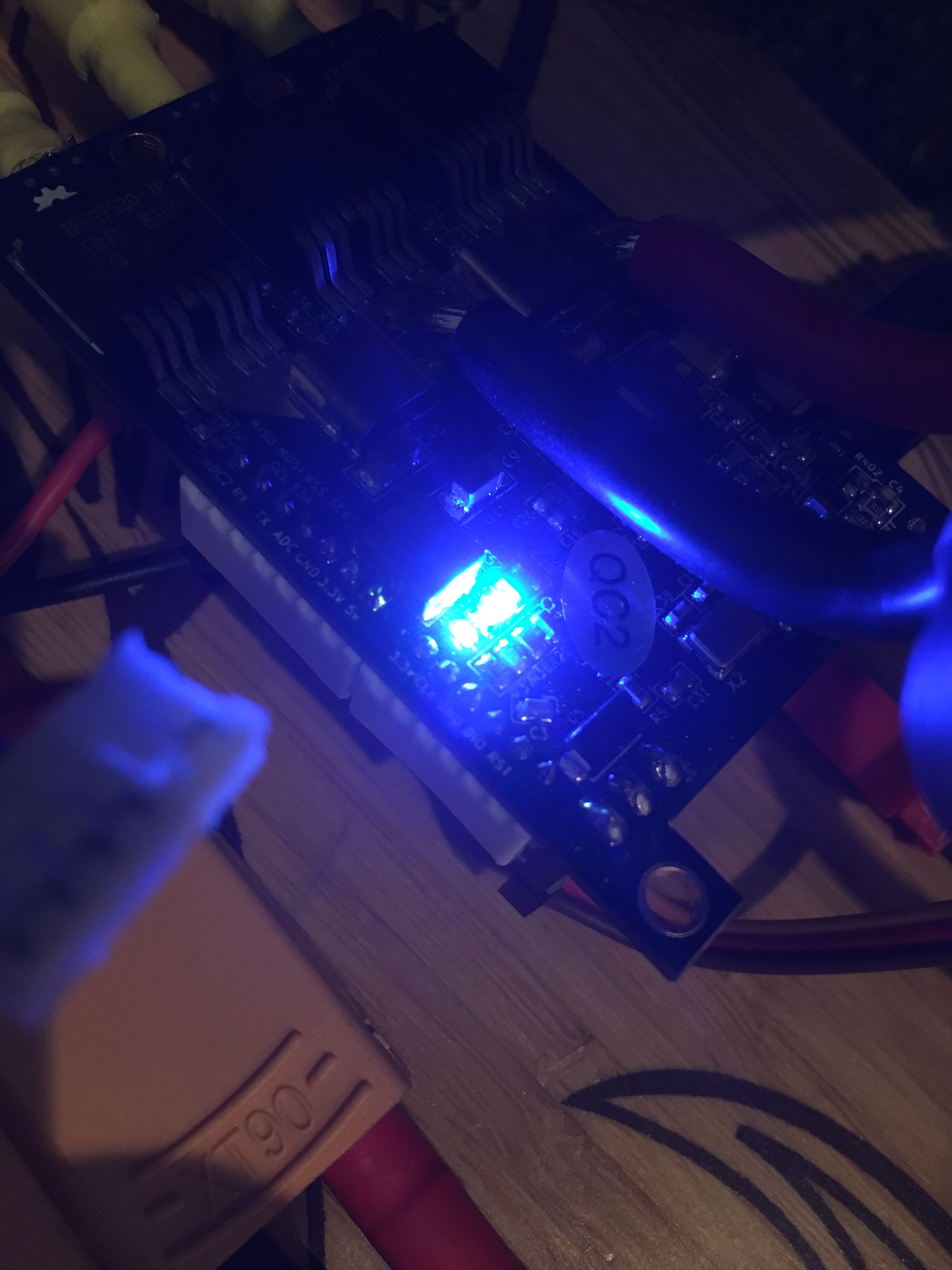 It never turns off it just goes bright then dim

Does the motor run, does the vesc look like it work fine or it is just doing this all the time? Because it is the signal light if it sends a command to the drv the light should brighten, then dim down, and when your programming a Firmware it should flash.

It won’t let me upload a video from my phone