Does such a thing exist? List any you know of. I’m also considering looking into 3D printing but not too sure how to make the throttle part waterproof. Does something exist on that front too?

Agree with @banjaxxed no reason you can’t just waterproof the existing electronics that said just being in a plastic shell and in your hand makes it pretty easy to protect the controllers from water damage really. If you have a mechanical moving part though like the trigger or a wheel you need parts to move relative to each other so you aren’t going to have a perfect seal really.

I used corrosionx, blu-tack and plastidip.

The reason I’m asking is because the application is on the water (not skateboard). So being waterproof is crucial!

In that case, all the circuit boards on the entire vehicle need to have conformal coating except on the heatsinks

I don’t think it excist from the shelf. But you could probably make a waterproof remote using gyroscope sensors and wifi communication. Or use a smartphone with waterproof case

I’m just worried about the remote. I need some sort of throttle piece that is waterproof. I can make a case to waterproof the rest of the remote. Coating won’t work on a moving part and smartphone isn’t a safe answer. 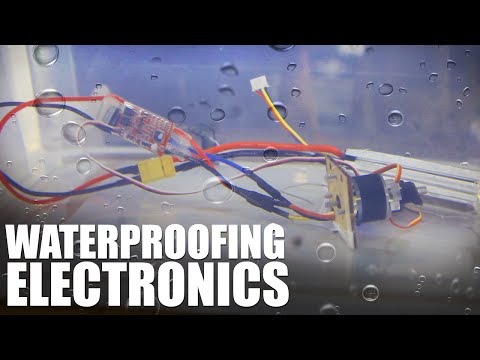 why is smartphone not a safe answer? just get a waterproof case and chuck a wristband in it and your good to go

Not sure about your application, but if you want to fully submerge the remote underwater, and it communicates through WiFi, its going to be a problem, RF waves are adsorbed by water, so you wont get any wireless connectivity, or at least for a reasonable distance.

Good point believe about a 1ft down and you typically lose any signal but so long as the receiver is above the water line it should be fine. I was also thinking perhaps weight sensors under pads on the board something like how one-wheel works might be a good option as well to avoid needing a controller at all really (eating it on water isn’t as bad as eating it on concrete, less road rash).

Regarding a smartphone or using gyros I’d be worried about them being affected by the acceleration/deceleration when getting going/stopping or turning but not sure how sensitive they are to those things (also just difficult to keep your hand oriented in an exact position when bouncing around and trying to have fun).

So it’s for an “efoil”. The antenna will be above water. But the remote will get wet. So that’s my concern.