So I got this idea in my head how well would it work, if one motor had let’s say 3:1 gearing ratio, and the second one has, 2:1. Ideally, it could be implemented on a mountainboard - more room for different gearing ratios!

The scenario would be like this - there would be a control switch to just control one esc - one motor, once the ‘‘first motor’’ has reached its maximum usage, you switch to the second esc and fire up the second motor, which has more speed…

There might be some ‘‘lag’’ in between the first motor stopping and the second firing up… but perhaps, with some advanced electronics this could be made to work…

Just an idea… let’s discuss this…

Since bicycles can get away with wider space for sprockets, there should be a way for eboards, too!

Aim of this would be to just gear it, so the board can be started from a standstill… then once optimum speed has been reached, the second motor would kick in / be started.

Would not suit most of the people… probably totally useless for the ones who only goes 20kph / 15mph… but still… perhaps there are some mad ones, who would like to have 2 different gearings. 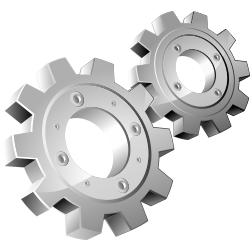 @lowGuido Did something similar, though not exactly, with varying kv motors. The idea is to have one lower kv motor for torque and as speed picks up, the higher kv motor propels you faster. Not sure how it ended up working out.

Typically, your always as slow as your weakest link. So IMO it wouldn’t work in the traditional sense.

Unless, we can change gears like a bike then it’s a bit difficult. We’re always limited on the space we have available.

That would be doable as far as hill climb.

But I think top speed is still only limited to as fast as your “belt drive” can sustain.

Unless you can completely remove the belts and stop power to the belt motors.

In a sense that would work. But you wouldn’t be able to max out on your hub motor because the belt system is providing extra resistance.

Unless they are both capable of the same max speed but then what’s the benefit? Just the 4WD aspect?

A CVT - continuous variable transmission allows for many ratios which could decrease the need for as large of motors.

It’s been done in larger vehicles. Might work for E boards also.

The scenario would be like this - there would be a control switch to just control one esc - one motor, once the ‘‘first motor’’ has reached its maximum usage, you switch to the second esc and fire up the second motor, which has more speed…

There might be some ‘‘lag’’ in between the first motor stopping and the second firing up… but perhaps, with some advanced electronics this could be made to work…

Just an idea… let’s discuss this…

umm… why? Basically you have one motor working at a time while carrying two motors, two drivetains, two esc etc.

We can go all out in the $5k range lol

Could literally build a mini car for your feet.

I think we’re talking about different setups. I was referring to the design lowguido did with 2 varying kv motors, not carvons dual hub dual satellite config.

The main benefit would be achieving higher speeds while preserving low end torque. Since I have a dual diag config on my board, I might try this out sometime…

You’ll get slightly better top speed and you’ll have torque but it’s never equal to the top speed KV and the high torque alone. It’s more like in between. So IMO I don’t think you’d get the best of both worlds. I tried it… didn’t work out that well. But don’t let that stop anyone to try. More information is better then less.

A CVT - continuous variable transmission allows for many ratios which could decrease the need for as large of motors.

It’s been done in larger vehicles. Might work for E boards also.

I suppose something similar happens in scooter (50cc) gearboxes, im not that technically / mechanically smart yet, but basically that is just what is called ‘‘automatic transmission’’. Is that correct?

Gears change when certain rpm/ speed has been reached…

So… know the question would be - is it feasible to do it on such a small scale vehicle / construction size as an eboard?

It would already work great if there were just 2 speeds… It’s actually why I started this thread - was wondering is it possible to make a ‘‘gearbox’’ for e-boards… (again mountainboards might be better suited for this application because of their clearance / wider space for various parts.)

umm… why? Basically you have one motor working at a time while carrying two motors, two drivetains, two esc etc.

I was imagining a situation where only one motor is working to sustain the needed power. I assume it could be better if 2 motors were working in sync with each other but it just seems that there will be times (high torque vs high speed) where both motors won’t be able to work as efficiently, so that’s why I came to idea to just using each motor for its best suited application, once the motor no longer is able to keep up, the second one takes the lead…

Plus, it seems tricky for me to make both motors to work in sync… I am not quit sure how well it would work out if one motor was putting out more torque / more speed while the second one would put out less…

Perhaps someone with faulty motors / escs in dual drive system can comment on this… always wondered do they really work 100% the same all the time.

You engage this clutch when you need to change the gears, so there should be some sort of locking mechanism, which engages and disengages the ‘‘extra gear’’ from the motor (and also the main gear!)

This could work with just one dual shaft motor. There would be a need to extend the shaft probably but someone mechanically savy could perhaps figure this out… there are people who spend countless hours fiddling with their gas/diesel cars all the time

Not entirely sure how this might look from the benefit / financial side… but there are different concepts in this world… some work, some don’t … some are just in the middle… not sure where this one goes

Each driven wheel is equipped with its own electric motor, which can be fed varying electrical power to provide any required torque or power output for each wheel independently. This produces a much simpler solution for multiple driven wheels in very large vehicles.[…] – It also improves the ability to allow different wheels to run at different speeds, which is useful for steered wheels in large construction vehicles.

That sort of suggests it could help with steering if the ‘‘software’’ would be optimized, to allow to choose a direction while holding the remote.

This has already been implemented in one electic sports car (could be Mercedes, saw it on Top Gear). It was called ‘‘power steering’’ or something similar, car was turning more because the outside motor was spinning faster/stronger than the inside wheel

A continuously variable transmission (CVT) is an automatic transmission that can change seamlessly through a continuous range of gear ratios. This contrasts with other transmissions that provide a limited number of gear ratios in fixed steps. The flexibility of a CVT with suitable control may allow the engine to operate at a constant RPM while the vehicle moves at varying speeds. CVTs are used in automobiles, tractors, motor scooters, snowmobiles and earthmoving equipment. The most common typ...

Sorry for the very long replies… I assume I just got enthusiastic about this concept / idea.

Found someone else has theorized about similar idea (on e-bike):

Electric Motorcycle Builds has 11,711 members. This is a new forum created for the sharing photos, descriptions and questions about electric motorcycle builds and conversions. If you are interested... 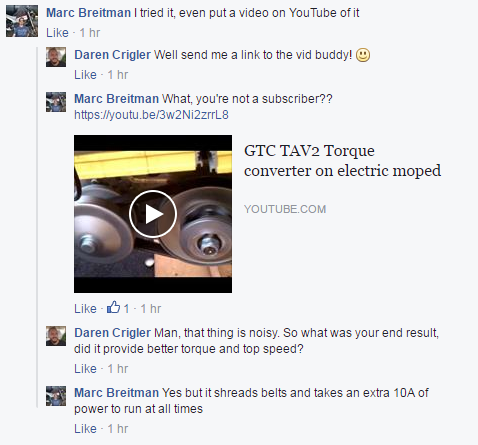 I think this type of centrigugal transmission could be practical if you are working on a larger build like an e-mtb using a two stage gearing approach. https://www.sram.com/sram/urban/products/automatix It will probably need to be adjusted so that it shifts at the right time since smaller skateboard wheels will have higher rpms compared to a bike wheel.

Yeah, gearing is more suitable for emtbs… (off road, city, hard packed trails, standstill start and so on… ) … hard to implement on a small longboard.