What do you guys think about this dual hub motor truck?

So I’ve been looking for hub motors some time now and today I found some very cheap ones on eBay which seem like they should do their job well for the price and also have a decent amount of power (400watt each). Anyone can give me some advice? 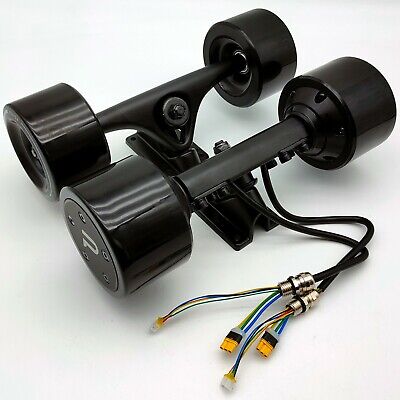 I’d go with ones that has replacements, like bound motors. Also, hubs are considered bad for most people. If you’re building something small and have smooth roads, then it’s fine. But generally, you would go belt drive just to have customization.

Hmmm… yep I see your point, should makes sense to invest some more money there and be happy for a long time / be able to adjust things. I might go with one of those: Remark: 1.all these parts in the kit are unassembled when shipment. 2.this All Terrain kit come without motors, it can suitable for flipsky 63 series Motors,recommend motor:6384/6374 /63100 etc . (If you need other KV values, please leave order...

Also I consider the price for the kit without the motors as truly fair even though the shipping costs are about 70€. Still very cheap for what you get in my opinion.

It’s probably not serviceable, and you will end up spending more money in the long-term if you shop for the cheapest parts.

Looking for advice on battery configuration

Don’t choose anything else until you’ve chosen your deck and enclosure. Because you need to know if it will even fit. Enclosures are much more difficult than you think, and you need to know if flexibility will be something you design for, or not. So go in a certain order, along the whole way making sure you choose things that are compatible with each other.

Leaving enclosures until last as an afterthought is a surefire way to end up in a less-than-ideal position.

I own a lot of safety gear (Downhill biker here

I already have a board (non flex) with an enclosure. I’ll build the battery pack on my own, already ordered some Samsung 40T3 21700 Cells and will go with a 7S2P pack which i might later on upgrade to 7S4P (Top mount the extra 2P).

Also got a dual ESC, but still struggling to get it working (will hopefully fix this in the next days)

And shipping time for ESK8 parts to Austria is in most cases min. 30 days

, so I don’t wanna waste too much time.

That flipsky drive train actually sucks. Its like my L faster drive train and they’re springs. So no going too fast on those.

And, if you are doing a 7s build, i know very little about this. I usually run 10s. I don’t know how 7s will perform on motors tbh here.

What means not going to fast? Personally I’d like to go around 35km/h max. Speed (loaded) which should be possible with my Setup according to the electric skateboard calculator. (I’m also not very heavy: about 65kg). I’ve been driving a 7S Setup on a board I build about 2 years ago (with cheap batteries) and it had plenty of power (belt drive) and somewhere around 30km/h were possible) idk which gear ratio I was driving also I don’t remember how much KV the motor had.

I also want to point out to everybody planing to build an electric skateboard: please really please don’t buy cheap crappy batteries, ik it’s been mentioned a lot here but I made some personal experience and in conclusion it isn’t worth it. My battery pack had a bad cell in it (tbh all those cells were bad) but in one cell the seperator broke while charging with ended in my battery pack exploding! And no it wasn’t my fault (except from buying those crappy batteries), I ofc. used a BMS and I do have plenty of knowledge regarding electronics. Buy from serious vendors and never charge your battery pack when no one’s at home. It’s a real safety issue! Take this serious!

I think for my purpose (mainly driving on the road, and sometime on gravel roads the flipsky should fit my needs. I don’t want a high end mountain board (at least atm.) I’ll rather build another board in like a year when money won’t be a problem anymore.

If that’s the case, you can try your luck. I personally wouldn’t, but if you’re not making a large project, then i don’t see a huge issue. I will say this:

Those trucks will need a mountain board deck that angles. If you got that, you should be fine.

Thanks a lot for your advice.

But i don’t understand why they need a board that angles? The mounts do at least look like they are flat. And there is enough space for the Motors according to the measurements i made.

The motors aren’t the issue. The trucks are mountain board type trucks. They do not have any angles on it. Oh okay I get what you mean, do you think it’s possible to mount them without an angle? My board is really stiff (carbon fiber) so I don’t really see a problem mounting them on my board, I can send you some pictures later if it helps you.

Is it flat or angled on the ends? If its flat, you will have no turns. You can mount them, just remember that you have no turning angles. Usually, Skateboards have a 45° angle trucks for that. I think it comes with a 18° angle rubbers. But the turning with those are horrible… i know…

It’s flat on the ends. Are there any downsides if I just buy angled riser pads?

Perfect thank you very much!!!

Show us the deck and enclosure

Also got a dual ESC

What is the name of the dual ESC, or a photo of it

I’ll build the battery pack on my own

And shipping time for ESK8 parts to Austria is in most cases min. 30 days

, so I don’t wanna waste too much time.

Not getting good advice and having to buy stuff again is a much larger waste of time and money. Some of us have already made expensive & time-consuming mistakes that you are statistically likely to repeat.