What is your experience with abec 11 97mm flywheels?

Hi all i was thinking about getting some 97mm abec 11 flywheels for my enenrtion raptor so it would be smoother over some cracks and so on. I was wandering what yours thoughts would be about this and it would be nice to hear from some people who have actually some experience with these wheels. Thanks hh1

I’m using the 90mm 75a flywheels and they are very smooth especially compared to the Chinese knock offs.

Rolls over stuff with ease. rough sidewalks are significantly nicer to ride on.

More ground clearance for going up curb cuts without hitting your truck hanger.

More color choices if your not a fan of green.

Heavier and harder to spin up on steep hills

A little tippy when crossing grooves and pavement transitions.

Feels like it wanders a little more than 90mm’s

…go for the softer durometers like 78a or 75a for ride comfort.

go for the softer durometers like 78a or 75a for ride comfort.

Have you done 80a? How much do you weigh? Idk if this guide from Muir skate was wrong, but they say it should be based off of your weight and preference…not sure what I would prefer IRL but seems a bit confusing: Feels like it wanders a little more than 90mm’s

What do you mean by “it wanders”? Wobbles?

I’m also curious about how much the speed would increase from doing this on the Raptor. On the GT the speed would go from 36kmh to 42kmh coming from the 83mm wheels. So considering the raptor is supposed to go 45kmh technically it should be able to hit 51kmh+ with 97mm…right?

97mm might cause wheel bite on the Raptor. Even 90mm may cause it unless your running really tight bushings. I think abec11 flywheels 83mm 75a would improve your ride without the wheel bit issue.

What if you use big risers? Or would that make the ride too high off the ground? May not make a difference I guess

I was also wondering if I would get more speed woble if I not only get biggerwheels but also take a soft duo like 75a?

if you remove the riser or put on larger wheels, you increase the risk of wheel bite which can send you flying off your board. Unless your running a high speed setup with hard bushings adjust tightly. But then you won’t be able to turn at low speed. For safety sake I would keep the risers and stay with 83mm wheels. Just get softer wheels. The Chinese wheels are harder than their rating because of the material they’re made of. Chinese 78a are harder than Abec11 81a I’ve used both so I’m speaking from experience. I have not tried Abec11’s 97mm wheels but I have used their 90mm 81a and 75a. I am not having any speed wobbles with the softer wheels. The softer wheels may even help because excessive road vibration can cause wobbles by upsetting your balance. The difference between a rough road and a smooth one is huge! And softer wheels make rough roads feel smoother. There’s nothing like a buttery smooth road though, you can go so much faster! Things that cause speed wobbles are bushings that are too soft or too loose. A short wheelbase will also be less stable than a long wheelbase. My board is a downhill type 39"x 10" with 32" wheelbase. 44deg 10" Caliber II trucks on 1/4" risers, 90a bushings front and 95a bushings rear. The right bushings depend on your weight. I’m 185-190lbs. With bushings tight, I can go 25-30 mph without wobbles. This was very helpful. I guess I will buy some abec 11 83mm in 75a. I weigh 165lbs so I think softer is better for me since less force is pressing down on the wheel evening out some bumps. I am still waiting for my battery so I have not driven the board yet but having it lying around makes you wanting to upgrade the board simply because it is there

But I noticed that the raptor wheels are quite hard

I think the Raptor wheels are a harder compound for durability. Let us know how you go with the softer wheels if you upgrade. I know another Raptor owner has gone the greeen Abec ones with softer compound and removed 1 rise

Youll need to get new screw and nut if you remove a riser as the ones with the raptor obviously allow for 2, but when I tried doing it the thread of those bolts wont allow you to put just 1 riser on if that males sense. It wont let you tighten the truck back on properly as the thread on shaft isnt shallow enough as it has a spacer first.

Make sure your bushing is tight or tighter of goIng fast and make sure you habe safety gear on.

Softer wheels definitely feel better under your feet. I guess its become very difficult to ship lithium batteries these days. We can thank those stupid hover board knockoffs for that. The Raptors are very fast so you might want to start out with your bushing tight for stability until you get used to it. Riding a board under power is a lot different feel than free rolling downhill. Yes, I agree with Dedbny, wear a helmet at least. even a slow speed fall can mess you up if you hit the back of your head.

@Namasaki Do you have a Raptor?

No I have a Diy that I built. The Raptors look really good though, very polished. And the price is right, I don’t think you could buy the parts and build it yourself for less. I think my build cost around $1500 with lipos

@Dedbny I was planting on wearing safety gear especially after seeing the thread where a lot a more seasoned e-boarders showed of their battle wounds. Do you use the normal raptor bushings? did the person who removed the riser had any issues? I was planning on having tighter bushings as an e-board beginner. @namasaki I had the same thought that if I would build a board with these parts myself that I would not be cheaper and I liked the specs and the sleek look of the carbon deck housing al the components

The Raptor wheels are 80a, is that too hard? I just got some 97mm clones but after all this talk I’m not sure if that will be soft enough for city commutes on rough roads occasionally…

The Raptor deck is really nice. As far as using stock bushing. I never use stock bushings that come with any trucks. I’m currently using Riptide bushings and pivot cups.

I am not sure if these 80a wheels are really 80a wheels as I have read that most Chinese knock off are harder and why would this exclude just our beloved raptor wheels @mr_mahal and in comparison to my normal 78a wheels these feel like rocks. Ok so I have got a next thing to look into and that are bushings

I will get a second pair for the Raptor, 83mm 80a, if the stock Raptor ones are too rough. I’m using the 83 mm Flywheels on my Raptor right now and they are gorgeous! The Enertion wheels are good but a bit too hard imo. (Check out Jasons privat Raptor) I totally forgot how good the ABEC 11 urethane is, because I have used different HAWG...

@tarzan did the wheel and riser change. 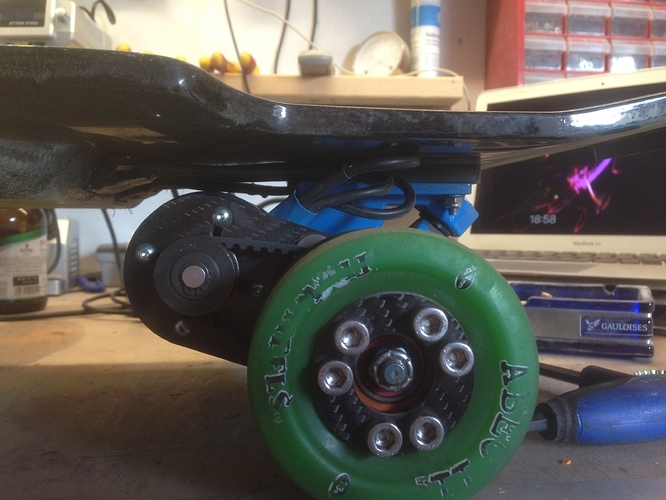 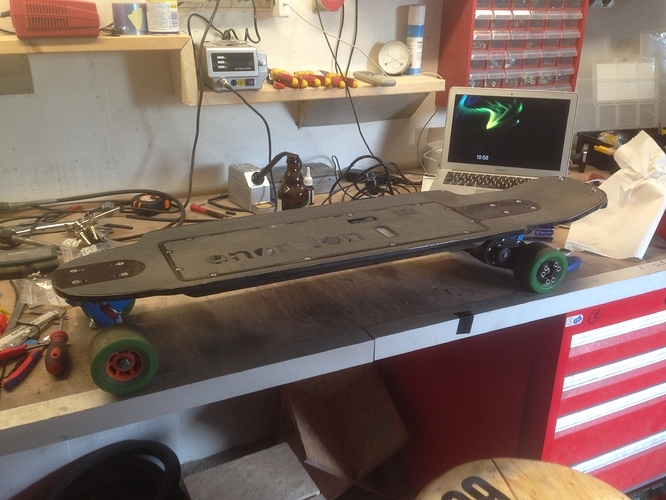