can someone tell why using a 18650 pack is so much prefered over a lets say zippy LiPo Packs? they all seem to have the same specs and im kinda sure that the space they need is also the same.

For those who are just now entering the field of diy electric skateboards or just looking to upgrade I figured it was time to talk about the pros and cons of 18650s vs lipos and which in general makes more sense. So from my research a li ion is going...

Thats a real good question and there are a lot of different opinions. Here are a few facts about the two. Matching cell to cell, Lipos have much higher discharge rate than Li-ions. Therefore, in order to equal the discharge capability of a Lipo pack, the Li-ion pack would have to have multiple cells in parallel making it larger and consequently heavier. Li-ion cells can discharge lower than Lipo cells. Example: 10-Lipo cells/5000mah 60C in series = 10s/ 5ah/ 300a discharge 30-25R Li-ion cells= 10s3p= 10s/ 7.5ah/ 60a discharge

Hey @Namasaki is it possible for a li-ion to have a ‘c’ rating as with lipos so they discharge at ‘x’ times the capacity or is it only possible to increase the capacity (and available discharge rate) with parallel cells?

…this would explain some of the crazy 12s7p configurations I’ve seen!!

I guess that you could say the 25R is a 8C battery but they are not normally referred to that way.

Oh ok - that makes sense - thanks. So when it comes to raw power li-ions are a long way behind lipos!

Don’t forget that there are pro’s and cons of each, I myself prefer LiPo’s like Namasaki, but it’s all about what you want from your battery. I’ve found Li-Ion’s are more expensive and require more work and (ideally) a spot-welder, but they reward you with a lot more re-charge cycles. Ease of use and price swung me over to the LiPo camp.

i would probably rather go for a graphene lipo then a 18650 pack. if graphene lipos can hold up to their claims that is.

Oh ok - that makes sense - thanks. So when it comes to raw power li-ions are a long way behind lipos!

I would say that Lipos are a good choice if you need a lot of power in a small, low cost and light weight package. Li-ions are a good choice if you have plenty of room for them and don’t mind the added weight and cost. Note: the added cost of Li-ions is not only the cost of cells but also manufacturing cost. Either having someone build it or buying the proper equipment to build it yourself. Proper equipment means at least a 60a spot welder. The 30a welders will not cut it. Believe me, I tried both. The 30a just kept tripping the breaker. The 60a worked but I had to set it on full power & 8 pulses to get a solid weld nugget.

Don’t forget that there are pro’s and cons of each, I myself prefer LiPo’s like Namasaki, but it’s all about what you want from your battery.I’ve found Li-Ion’s are more expensive and require more work and (ideally) a spot-welder, but they reward you with a lot more re-charge cycles.Ease of use and price swung me over to the LiPo camp.

I started with Lipos then switched to Li-ions and then back to Lipos. My reason for going back to Lipos was the ability to have a lot of power in a small light package. I feel that low cost and ease of maintenance and replacement makes up for reduced longevity.

i would probably rather go for a graphene lipo then a 18650 pack.if graphene lipos can hold up to their claims that is.

The Graphene’s do sound enticing. From what I’ve heard they have much improved longevity over standard Lipos.

Like @Namasaki I have run both li-ion and lipo in multiple configurations. My personal opinion is…

10s3p made with 25R cells is ok, but there’s not enough available amps and the sag is killer for me.

10s3p made with 30Q cells is great, lots of amps and lots if discharge (said travel time).

Lipo 6s made with x2 Zippys is ok, decent amps but not a lot of too speed. Very cheap as you don’t need a bms, you can use a 30 bucks hobby charger.

10s lipo made with x5 2s Zippys is pretty hard to beat, lots of amps and lots of travel time and no sag. Either charge individually, which is a pain in the ass, ot use a BMS which is easy.

Given the choice I would use a 10s3p or 4p pack made with 30Q cells but a 10s lipo pack performs just as good, probably better, but doesn’t offer a ton of charge cycles. I build a lot of boards, for a guy that doesn’t cell powered boards, so I use a lot of lipo packs because of cost.

10s3p made with 25R cells is ok, but there’s not enough available amps and the sag is killer for me.

10s3p made with 30Q cells is great, lots of amps and lots if discharge (said travel time).

I don’t understand this statement, 25R’s are rated for 20A continuous discharge while 30Q’s are rated for 15A. It’d make sense for the 30Q’s to sag more so than the 25R’s

I don’t really understand it myself, ask @PXSS for specific. What I know from use is that a 10s3p with 25r’s will barely hit 15 mph and won’t do anything from a full stop on my RE/PT’ile board…this is with 6x2 AT wheels. The 10s3p with 30q’s never sags, has a ton of drive time performance is awesome. I don’t have all of my parts in yet, deck should be here today and the rest of my batteries on tuesday. Figured I’d go ahead and get this started so you could see the Red Ember (@treenutter) deck and Psychotiller (@psychotiller) AT wheels. Gear...

I was amazed when I first Rose a 30Q pack, I was really amazed when I put my AT build in the grass and still didn’t feel any sag. Going up a 15 deg hill I say 1v. They are a little expensive but for a primary pack it’s well worth the money.

I still have a 6s lipo pack on my beater board and I have 2 10s lipo packs I swap out in another board that is still in testing. I gave the board with 10s3p with 25r’s to my son because he only weighs 125 so it doesn’t sag much in him and he tops at 15mph because I configured the VESCs with that limit.

While your claims of less sag on the 30Q seem to be true, they may be a bit overstated. You are welcome to come ride my boards and then say I over stated. You should really try it and not rely on data sheets to get actual performance value. I’m just telling you my experience.

I’m just saying it’s a possibility that another factor is accounting for your large sag on 25R’s, perhaps a broken weld, or bad cell in a parallel group. Just 1 bad cell can cut your discharge potential by a lot. 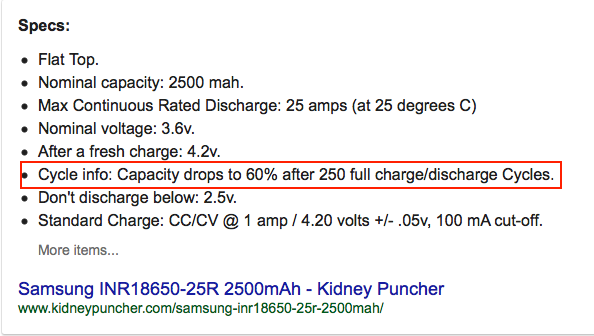 All if my packs are fine. I typically balance charge so I can see the voltage drift per cell. I always check each cell at least once a week. I test the resistance if my lipo cells every week. I keep logs via the @Ackmaniac Android app on all of my boards.