If this works for drones then we could see eSk8 tracks with inbuilt wireless charging?

"According to Kallman, GET has found a way to create a “power cloud” that can charge a drone while it’s in flight.

The system comprises a ground-based power station with a frame of wires positioned in a roughly circular shape. When turned on, this creates an electromagnetic field in the air near the station. A drone equipped with a special antennae charges by flying into the range of the power cloud." 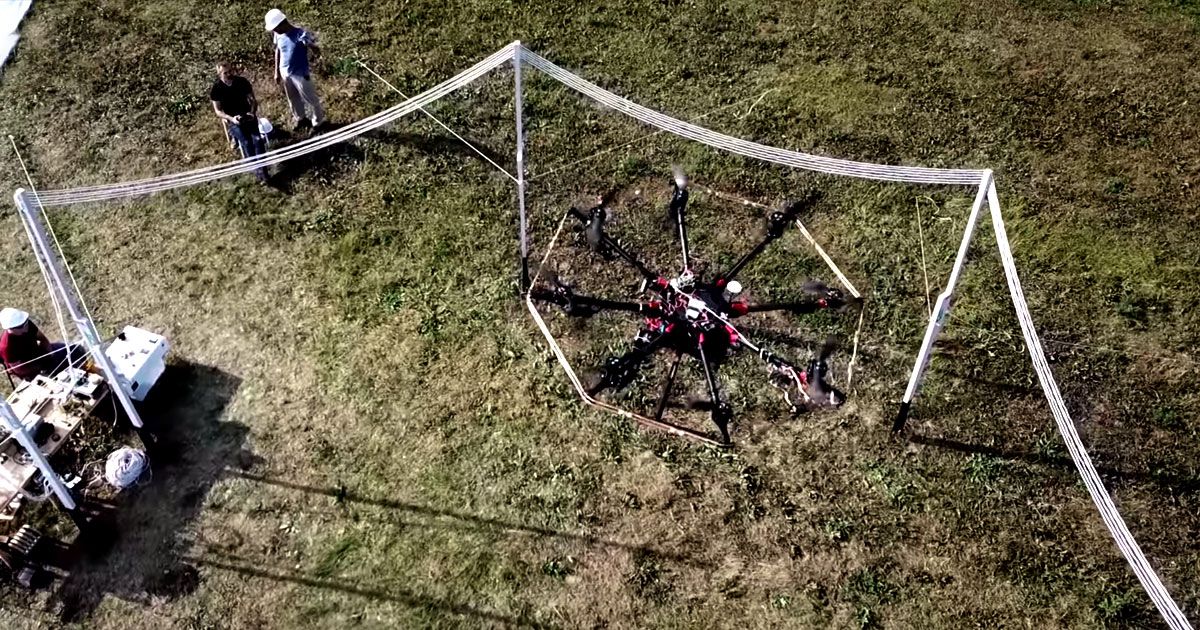 Not everything that goes up has to come down.

I immediately picture a nuclear-powered airplane that cruises around over Antarctica 24/7.

If you don’t care about energy efficiency, you can charge anything from any distance. Afaik even with a wireless charging pad the efficiency is about 70-80%.

The same thing wouldn’t be possible with a tesla coil ? With a 50/50 chance of zapping the drone of the air, it would be fun !

Psh RF power transmittance has been developed for almost 2 decades now. There’s RF all around you and going through you regularly. No joke the standard for yearly radiation exposure is ALARA.

As Low As Reasonably Achievable

Yeah, but in my opinion to achieve a modest rate of charge and range the field has to be pretty strong. There are no long term studies of electromagnetic induction at all. It also depends on the frequency… High frequency = heat on your body= danger

There is certainly a reason they only charge things from a few feet away. Personally I’d rather see 3 “lighthouses” in your room that each send out a lower power signal and only charge where the triangulated beams cross. This is what they’re currently developing to do non invasive brain surgeries.

You’re right. But if I want to charge a drone which is 2 meters up in the air the field has to be pretty strong so maybe even so that it inflicts damage on your body

@Balta_6 Wireless charging is somewhat similar to a Tesla coil with there reasonant inductive coupling, but yeah I’d say zaping a drone is probably just gonna kill it lol.

which yes some scientists do believe can cause cellular damage at extremely high dosages due to the heat.

For example the German law…

Alara is a guidline.

There are limits set. I dont quite remeber buit is either 5mrem or 20 mrem monthly/yearly

Everything is a guideline. milliRads is the measure for ALARA if I’m not mistaken (not that it doesn’t equate to rems). Learning about how an X-ray machine works is one of the most interesting things I ever had to learn.

When you’re doing inductive charging or transformation, like with a transformer or linear power supply, what emf world that be? It can greatly vary right?

Amplitude factors into the overall power as well but in general, yes. Lower frequency has worse strength but goes farther (AM radio = amplitude modulation, FM radio = frequency modulation). I happen to live right next to a park called Voice of America park. It was one of the first low frequency radio towers to be able to reach across to our allies in WWII. Its mainly retired now but every time I drive past it, it throws my car’s radio into a frenzy.