Hey everyone, I am planning out my 10s4p battery for my bamboo gt upgrade, cells are arriving in 2 days.

I have run into a problem that is the enclosure not being long enough to fit this configuration:

I do not have the tools to extend the enclosure or cnc the deck. I also don’t want to squeeze the bms on top of the esc as I am afraid the heat would cause problems.

I have looked into another configuration but still not sure exactly how it is supposed to be wired:

Can anyone help out with this? I also have no idea where to solder the new balance wires for the 2nd configuration.

Why not just have all cells vertically stacked?

Because the enclosure has screw holes that are in the way If you don’t want to downgrade to 10s3p, you can wire it like this… but it’s really weird

Similar to my idea. Hooray for MSPaint!

And yes, I did change line widths like 4 times

Yours is much better… lol.

However, make sure you insulate the shit out of that, that diagram can short very easily.

it’s pretty close to my current 10s4p pack, just without the rotated banks.

Yeah, mine has four layers of kapton and a layer of neoprene foam between them.

Thanks for the drawings, 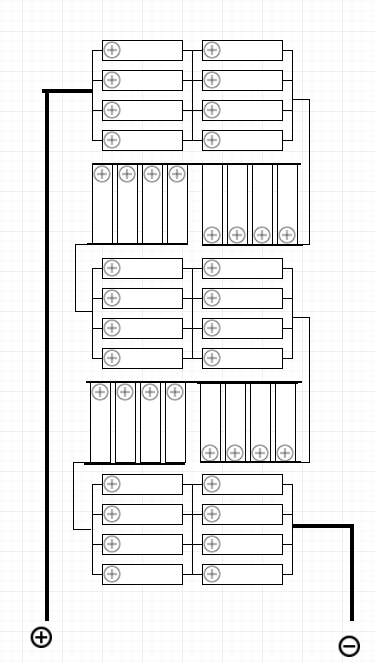 Yeah, mine has four layers of kapton and a layer of neoprene foam between them.

Do you tape up each cell group?

Your is like an upside down U shape. Is there any benefit to it?

That configuration lets you keep the output wires as short as possible, which helps prevent voltage spikes and noise. Yes, I insulated each cell group, then when the pack was all soldered I insulated between them again before heatshirnking it.

Ah i understand now. I will mock up each configuration with the cells before I spot weld them. Thanks for the advice @Jinra and @MysticalDork

@Jinra I’m worried that this is gonna be another board on fire. Those cells are so tight in there that the positive nickel strips are gonna be rubbing against the thin insulation of the negative cell housings. and there doesn’t appear to be enough room to properly insulate the cell groups.

Yea I noticed that too, not sure how well it’ll hold up to miles and miles of vibrations @12meterkuk This is what can happen when your batteries short out.

Shave off the plastic boundaries at the top and bottom (according to your picture’s orientation) and you’ll have more space to play around with. I’m going to stack my bms though. I feel that the much greater potential to create a short with your unconventional configuration will cause more problems than a possible overheating issue with the bms stacked on top. Just my 2 cents.

I just finished the pack, all is well for now. Using the normal configuration. Will update if any explosions occur.

pics! pics! you must show pics! Still waiting on some insulation and heat shrink to arrive. Will post more pics then.