got this for a good price . fitted with XT60 connectors . i dont see why i should pass this one . its pre owned .

can i strip and re assemble it flat ?

actually , can i use it for eboard ? 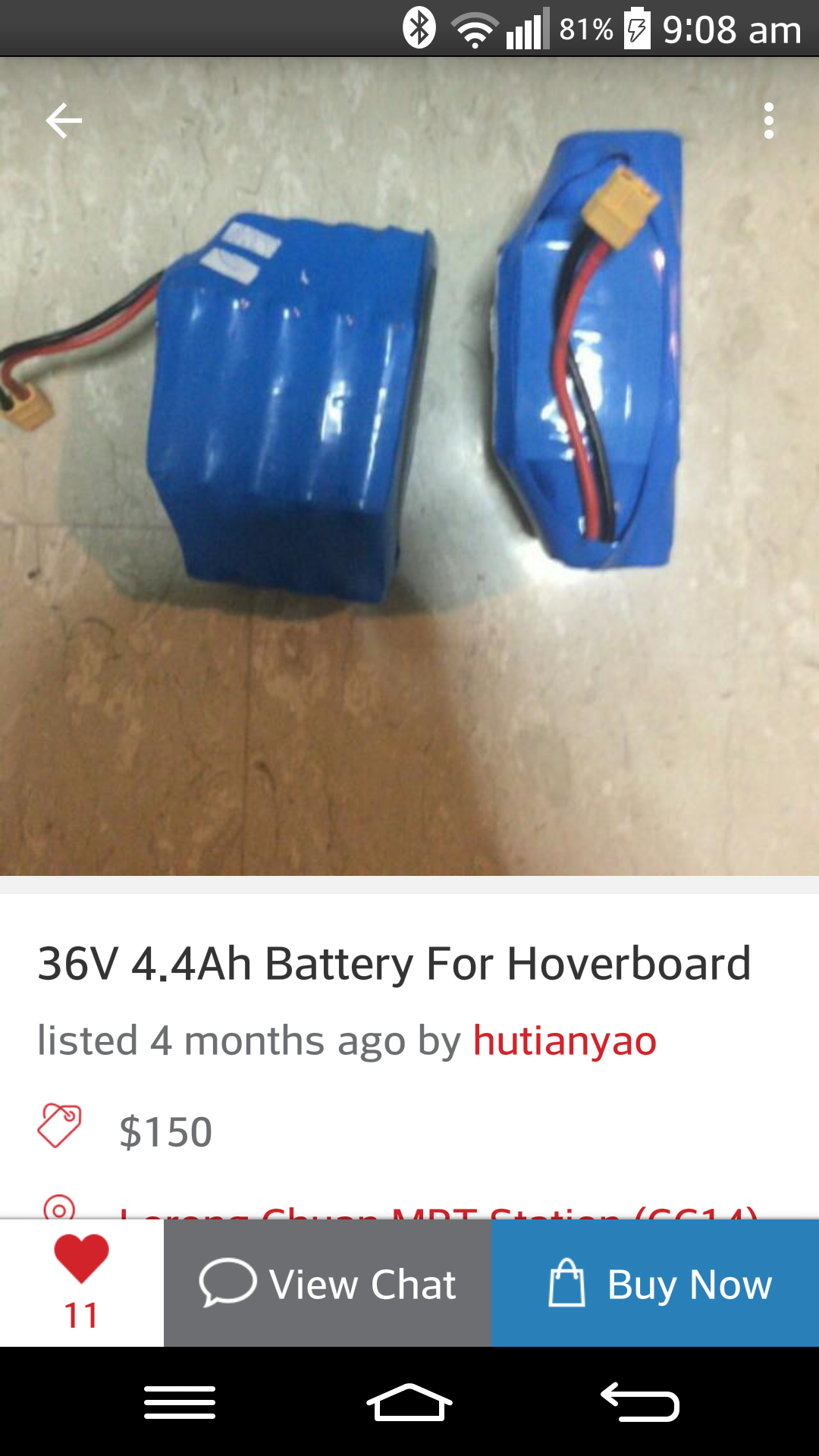 It may work. Is there a BMS inside of it? I think the BMS is usually integrated into the hoverboard/self balancing scooter itself. Are there balance leads? If there is no BMS and no balance leads then you could wire up your own balance leads and use a normal lipo/liion charger or buy a bms and have a one plug charging port.

You need to take the shrink wrap off and figure what you have. If there’s no balance leads and no bms in there…that would explain the hoverboard fires!

Find out what cells they are too

150$ for an unknown cell is super risky Their claimed amp hours could be very unrealistic. There are tons of cells out there that have bogus amp hour ratings

You should’ve consulted us first! I’ve been looking for good 18650 deals for the last two weeks and have a couple

You can redo it flat. Just pull off the sharp tabs and redo them with a spot welder or risk soldering it.

For that much money you can get a bunch of new verifiably good cells. Super risky buying that. It could be cooked for all you know.
Tel us what’s inside.
Can’t imagine it’s unadulterated as it would be strange to have xt plugs on a hoverboard.

I would not recommend doing this. 1. It is risky 2. It is more likely not to have a BMS and will most likely be hard to charge and maintain
For the same price you can get great batteries that are more flat and work better.
Here is the battery I have - http://www3.towerhobbies.com/cgi-bin/wti0001p?&I=LXFSTZ&P=7
These batteries have great reviews and seem to be reliable. Also they offer a great charger.

Hope your build goes well and hope I could help!

a friend of mine says that 36V 4.4Ah means that it has only 20 cells inside of it . its 18650 . just not informed if its LG , Samsung or other makes . it should have a BMS and charger . owner stated there it has . so just have to wait for his reply .

this is another battery pack concealed in an aluminium casing with locks from china . it has 40cells in total . 36V . 4.4Ah . other details not to sure . its not an 18650 LG , Sony , Samsung or other well known brand . its just another 40pieces of 30A rated 18650 from china . the local company is a well reputable cell distributor in singapore . all kinds of battery ? they have it .

any one ever strip any local battery and re assembled one ? any advice , opinion , critics , scolding are welcome . fyi , it is almost impossible to hurt me with words . so give me all you got . any comments & advice are truly welcome 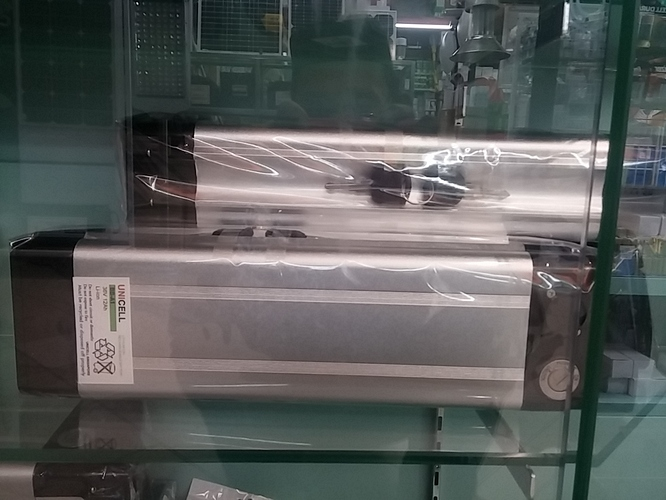 They should be able to tell u exactly the cell and then you can research that cell. And the “fake” cells…anything with the name “fire” in it for example, can be really bad. I don’t have the link but some Russian site has discharge graphs for hundreds of cells ( although not the latest latest). Worth seeing.

I don’t know your shipping costs but Lg Hg2 3000mah is what I got and am happy.
How many in series and parallel are u wanting to do?

i wont change the configuration already in it . just rearrange it flat . the girl in store didnt know 10s 12s and such . all she knows is voltage and number of cells in it which is 40 . 10 extra than space cell . and almost halve the price of space .

… or maybe i can ask them to custom made for me a flat cell pack of 40cells . since they cater to custom packs . minus the aluminium casing and key lock , i guess it would be just about $10 less .

Reassembled them flat by tearing off the tabs and soldering the cells.

There’s a BMS built in, but I had some issues with the brakes and over voltage errors on my esk8 which was solved by wiring the BMS to be used for charge only.

It would appear that the fire problems they had was as a result of a poor charger design, they didn’t end the charge properly when the batteries were full; I’ve been using a custom charger (Dc -dc converter at 42v and 4.4A) and haven’t had any problems with them.

Cheap, provides expected capacity, and don’t catch on fire unless abused,…why wouldn’t you use them?

I’ve just bought 4 of these. I’m going to wire them in parallel to the VESC.

Question is can I charge all 4 packs through one port?

Also, can you show a pic of your re-arranged batteries? And the wiring for the BMS for charge only?

Thanks for your help!

I suppose you could charge them all from one port by paralleling them…I wouldn’t recommend doing so if the packs are used separately. (they need to be at very close to the same state of charge and condition before connecting in parallel, unless you want a damaged pack or fire.)

I built the pack as per the image I’ve attached. (except that one of those packs contains only 20 cells, so I made a 10s2p pack. (so groups of 2 not 4…however with multiple salvage packs one could easily increase the capacity as shown.)

As for BMS being utilized for charging only… I don’t actually have the bms attached to the pack at all, only a connector that matches the output side of the bms which is connected to the appropriate places in the pack.

Aside from the connector which plugs into the bms and the sensor wires leading to it, the pack is built as if it won’t be used with the bms at all, the magic all happens before the plug that’s on the charger ( The plug itself has the negative pole missing, the bms functions as the negative for charging)

I just noted the voltage at each sensor wire before I disassembled the cells from the original pack, so as to be able to reconnect it to the correct cells once they were assembled in a somewhat flatter form.

To add more cells, one just either increases the size of the groups (of four in the pic, as its laid out as a 10s4p) to add capacity(increasing the "P"arallel, or increase the number of groups (to add voltage, or increase the "S"eries)

I’ve got these. They have a BMS, it works 100% fine at 10S6P and is by far the best deal you will find on batteries. I went from the bottom of Griffith Observatory in LA to the TOP and back down about 3 times. The VESCX reached 85*, but the batteries were fine. I parallel charge them with an XLR connector at 2Amps total. I monitored them the first 5 charges, but they seem to be fine. Zero heat issues at all. These are Genuine LG batteries. The BMS seems to be simple and works well.

how are you charging these? are 3 batteries wired in parallel and you wire 1 charge port and the main port goes to the vesc? are you leaving them in parallel which uses all 3 bms’s in the 3 batteries? is there anyway you can draw a pic?

Hey I just wanted to bump this again and follow up with jerkstore’s question. The price is right on these battery packs right now (~$50) and I was thinking of getting 2 of the 10S2P packs.

Thanks in advance! Been enjoying these boards (ha, pun) a lot.

On the BMS’s that came in mine, there was an empty pad on the BMS where a charge wire is supposed to go in addition to the wire that was already there on the pad labeled discharge.

I wired them piggybacked to each other (to increase their current capability) and it seemed to work.

So on mine, for the two packs combined and setup as 10s4p, each parallel set of cells had four wires going to it (two positive connected together, and two negative connected together) Effectively still two wires, but as I didn’t have any heavier wire to use I just doubled up the original stuff…the same as the bms’s were…

I’m not sure if you can just hook the packs together in parallel since I broke down the packs to separate cells and re-built it as a flat, but i don’t see why it shouldn’t work…

Hey mate, sorry to resume such an old thread, any chance you could sketch how you wired the batteries in order to charge them in parallel. These packs normally dont come with a dedicated input cables hence the question. Thanks