Hey guys just saw this on Banggood and I thought it was to good of a deal not to share! Didnt really know where to post this but I thought on here might not be a bad idea. Anyways as the title states its a 2500mw laser engraver with a engraving area of 380x300mm. I was looking around and 2500mw lasers alone cost about $70 so I personally think its a great deal and may just jump on it myself. Though if you click on the link below you can see that theres only 6 units available and the offer doesn’t start for over 8 hours (at the time of writing this) so you’ll probably have to jump on it quickly. Ive wanted a laser engraver for quite a while now and I thought the people on these forums seems to be the kind that would make good use out of one. Anyways thats all from me, link is below. 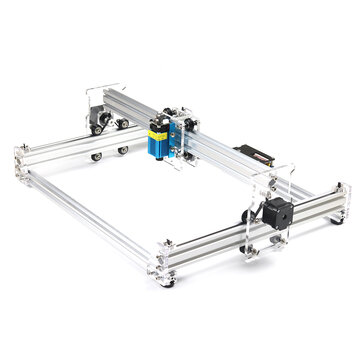 What are you planning on using it for?

I wish I had seen that a week ago. I just bought a 2.5w laser for an old Anet A8 retrofit. Gonna use it in decks and maybe cutting plastics, if it will.

@Pantologist im not quite sure. In the past ive used my old library’s engraver for cutting 1/4" wood and engraving a bunch of stuff but this thing definitely isn’t going to be cutting through wood any time soon. Anyways im not actually planning on purchasing it but they do have a lot of uses none the less.

@mmaner let us know how that goes! I to have an Anet A8 and its been a great printer so far.

@JdogAwesome my Anet A8 has been nothing but a pain in the ass. Had to replace the power supply out of the box, put 2 extruders on it since I bought it. Just replaced the heater and now it won’t heat past 140. I have a maker V2 that works pretty well so I figured I’d repurpose this one.

I thought I might use it to engrave designs and text into decks and cut cool grip shapes and maybe (if I’m lucky) cut out switch plates using 1/8 ABS.

I haven’t been able to find much info about typical uses or anything really, it just looked like fun and a cool way to repurpose a junk 3d printer.

Wow I’m really sorry to hear that, I’ve heard a lot of story’s about the printer being quite hit or miss. Trust me this thing hasn’t been perfect it’s had it’s fair share of problems but for $150 I can’t complain.

Hmmm. I have a Prusa Mk2S on the way I could mod into a laser cutter…

Thanks for the link!

No problem! Let us know how you like the Prusa ive loved there printers and especially the auto bed leveling, god that sounds nice, such a pain leveling the A8.

I almost actually ended up with a rostock max v3 but I couldn’t bring myself to spend the extra $300 for the kit plus you really need to replace the hotend for it to shine according to what I’ve read.

Yeah that Delta looks nice but idk if you really need so much vertical build area, personally I’d like more of a wide then tall build platform. Really thinking about building my own printer, or buying another one but I’ve been spending a lot of dough on my new fpv quad racing hobby so that’s kinda out of the picture lol. Oh and that new Moia or whatever SLA kit on Kickstarter looks really cool to be honest, the print detail is just amazing!

There’s a laser mod for the x-carve i’d like to try out this year.

but first i need to get it cutting out my decks for me.

@JdogAwesome thanks for sharing this! price already spiked to $250usd

Yeah like I said there were only 6 pieces available so I guess they all got bought up in the night.

Thanks for showing this!

Could u give some background info on how much power is needed to cut different materials?

This might be useful, if it would be able to cut some plastic sheets… though im not sure can these ‘‘desktop’’ lasers can do that… as I’ve seen only large industrial, multi thousand dollars priced machines capable of doing it…

Otherwise, 2.5-5w laser power seems to be quite good for engraving and making logo’s / markings etc.

Though, the ‘‘upgrade’’ to 5.5w laser will cost a bit, since it looks like kit now costs about +200 usd… while the laser head for 5.5w laser, also costs close to that itself… so yeh as said previously, some insight for non-cnc minded folks would be great! @JdogAwesome

Found the power levels, for cutting it looks like 15w of laser power, or 15 000mw would be needed, otherwise only engraving is possible. Though it looks lik 15w is for wood… not entirely sure whenever plastic is easier to cut than wood or not. 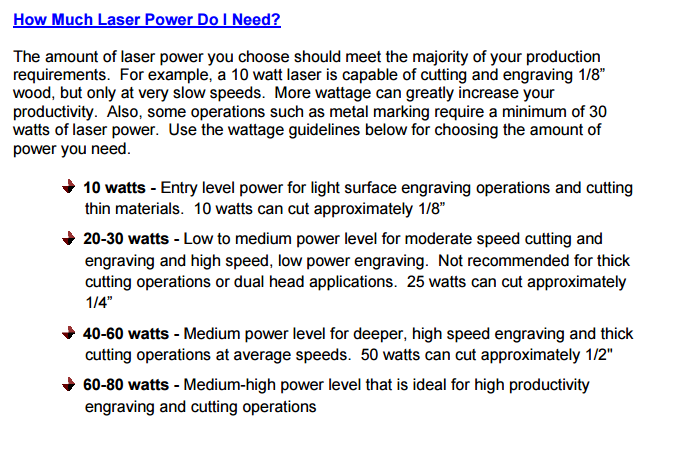 I am a bit uneasy with those values. My dad has a 500mw laser he used for engraving. He can engrave stainless steel with it, slowly but it works. He can engrave wood pretty fast.

I’ve heard the same about A8’s, some people get great ones & some people get crap. Anyways, this is where I started with the laser retro-fit. Ill let you know how it goes…

Prusa i3 Laser Mount for Laser Engraving and Cutting (fits samelladrucker) by...

Update: 10% off on Laser and other Electronic Items. Use code "Elec" at checkout! http://goo.gl/iuHgLF Turn your Prusa i3 (or if you have: your samelladrucker) into a Laser Cutter! It will cut though Foil and engrave Wood. Nothing too fancy, but...

Hey thanks for that image has some good info. The industrial grade laser cutter at my old library was a 30W C02 laser cutter and it’s limit was pretty much cutting though maybe max of 1/2" wood, oh and that thing costs tens of thousands. So pretty much with any of these desktop printers your only going to be engraving things. On the item listing it says it can only engrave wood, leather and other soft materials no ceramics, metals, Acrylic or anything transparent. Also @mmaner not all laser engravers are the same, the lasers all work at different frequencies for cutting though different materials. For example the 30W laser at the library couldn’t engrave any metals, but could easily engrave glass and cut though wood and Acrylic. It also had an option for frequency control when exporting the print for different materials, something these desktop printers lack. Anyways all in all, these ones are great for engraving simple stuff but not much more.

Thats cool. Mostly all I want to do is put my name on my decks. It would be cool to cut plastics instead of printing them, but no big either way.