So this build is pretty quick and dirty. I slapped it together in an hour so its not pretty but it does fill a hole in my eskate collection. A small easy to carry board that can fit on a backpack, good for shops or public transport. But not a compromise on speed, power or range. It packs an 8000mAh 6S and is capable of 36km/h with a range of 22km More details to come. That’s what I love about your boards man, you always use things others call trash and you don’t mind what it looks like as long as it works.

THIS IS SICK!!! What size are the wheels? Is it light enough to skate like a regular skateboard?

the wheels are 70mm so they are small in esk8 terms, but large in street terms. the board is heaver than a regular street deck. I tried some flip tricks but I need to get used to the extra weight of the board. I’m sure someone who is more skilled than me could flip it… I mean it probably weighs half what a raptor1 weighs and someone managed to kick flip that. I will have to get some scales and weigh it properly but its not too heavy in terms of other esk8’s maybe around 4kg??

its actually a great mall grabber. and that’s what I made it for. LOL. so easy to carry around.

Those phase wires okay like that? Probably not much to get caught on while riding on the street.

phase wires okay like that? Probably not much to get caught on while riding on the street.

yeah they are fine. there was no where else that I could put the ESC on such a small deck given that the battery takes up the entire deck space. its not really any different from many other builds, just looks weird cause the deck is so small. 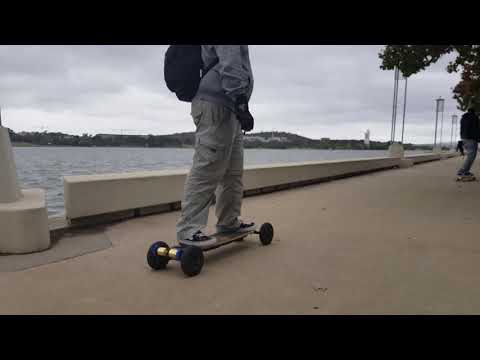