I really like using insert style pulleys, for a number of reasons. They keep the belts better aligned, they look cleaner aethetically, and they’re easy to swap out. The biggest trade off is the truck hanger modification that’s required, but it only takes about 20 minutes and its totally worth it.

So i paid a guy in Canada to design me some so i could use them in my builds. Thanks to his willingness to take my money, I now have models for the following:

and last but not least… 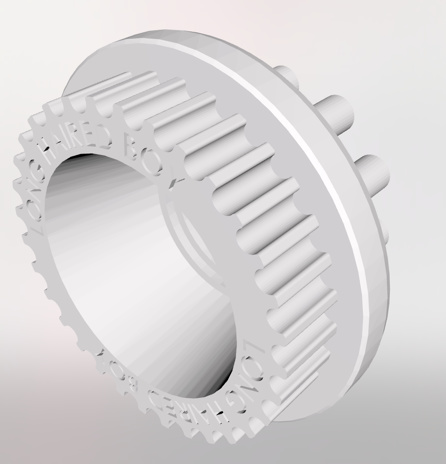 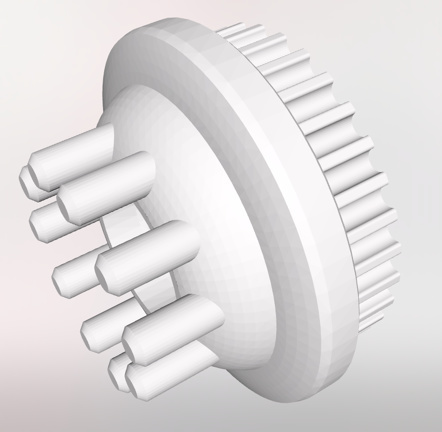 So now kegels are an easy DIY upgrade option for your gen 1 raptors and all you have to do is get pulleys, kegels, and some f608ZZs from amazon. Or chop your calibers and use them on your own build.

Two things you need to do to use any of these insert style wheel pulleys:

1) get some F608ZZ flanged bearings from Amazon: https://www.amazon.com/s/ref=nb_sb_noss_1?url=search-alias%3Daps&field-keywords=f608zz They’re dirt cheap and come by the 10 pack.

2) chop your truck hangers (unless you’re on a Raptor, which are already chopped for these kinds of pulleys) I have video on doing this for Evolve kegal pulleys. For my pulleys you need to take off 8mm of aluminum. You have to take more than that off for evolve pulleys which are a pain in the ass because the pulleys also have to be chopped, but that’s not relevant here. 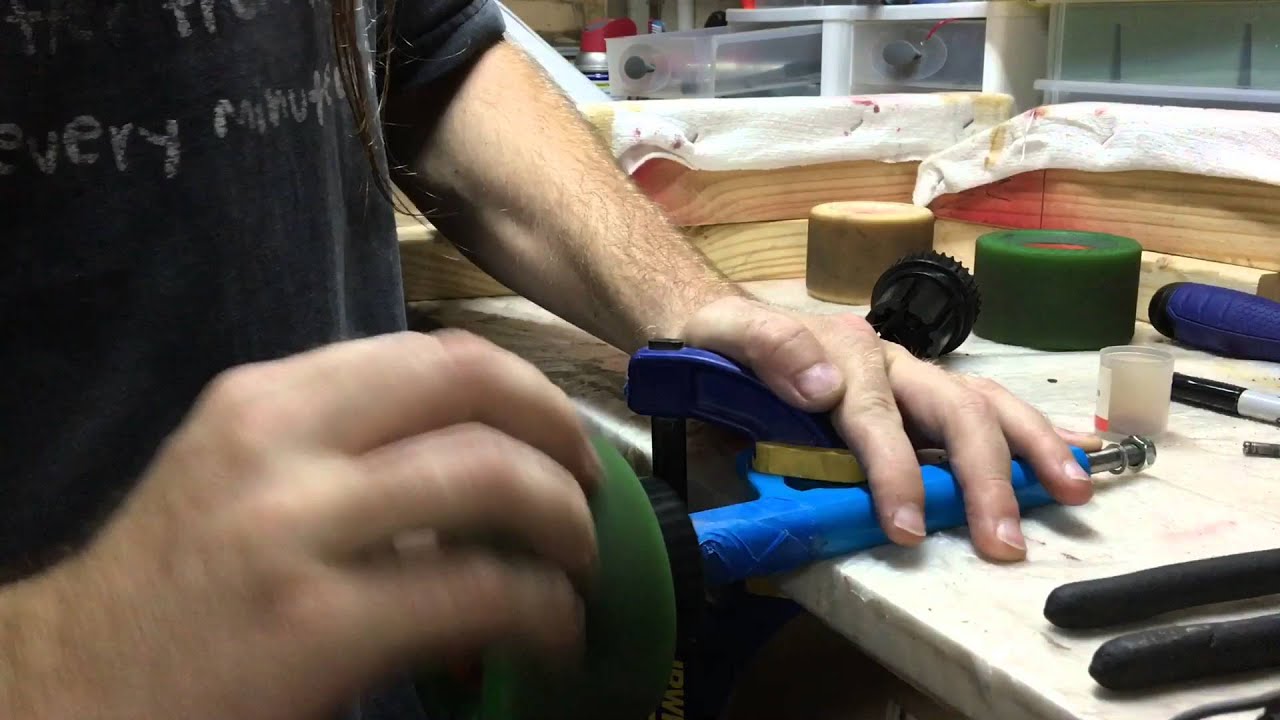 Right now the only place i have them is on my shapeways store because the only way i can get them out there is to put them there for now. I have plans to have these injection molded in black nylon, starting with the Kegel pulleys. That’s still in the shopping phase at the moment so for now my Shapeways shop is the only place to get them. I know the prices are kind of high but it is shapeways, afterall… and i’m also trying to raise some money for motors, steel motor pulleys, mounts for Ronins, reliable e-switches, and other R&D stuff I have in the works. 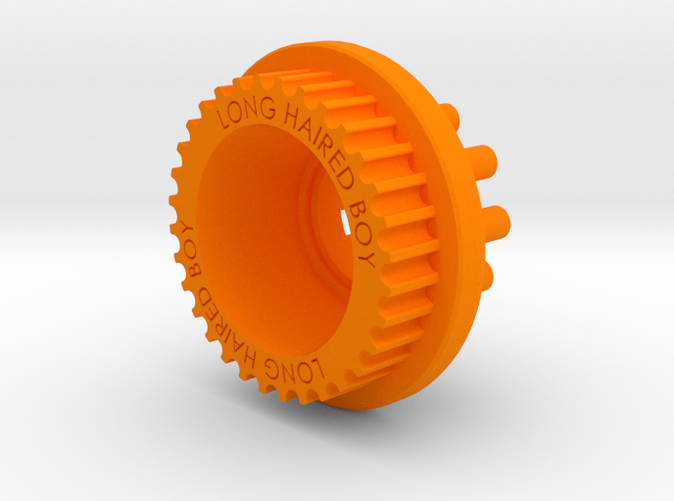 YES these pulleys hold up. I’ve been testing the kegel and flywheel prints on my own board for a couple of months now. They work well and wear well. And they sound good, too. orangutan kegal pullies, 32 teeth and drop in replacements on trucks chopped and...

The only reason i want to do nylon injection molded versions instead of sticking with these is because i want to bring the retail price down to under $20 per unit and offer free shipping to the US. So by buying these and trying them out you’ll be helping me do that.

Nice addition @longhairedboy. But why yet another custom beltwidth? As to the 9mm 12mm standards around?

oh man, i would buy these in a heart beat. Tough times trying to get enertion pulleys without paying 50%on shipping.

I don’t think they are supposed to be new sizes, they’re just oversized in width by 1mm so the 9mm & 12mm belts have a little wiggle room.

i’d like to add that kegals are FUCKING AMAZING on esk8s and they’ve stolen my heart completely. Maybe I should hit them up about making me some red ones. Its the only way they could possibly improve.

Looks great! Isint getting the mold made for an injection mold REALLY expensive?

@longhairedboy you should also do the flywheel snapin pulleys. I’ll give you the designs and modify them for free. I’ll put your branding on it too :D. Just hoping to buy them for cheap in the USA. What do you say?

Isn’t that what he’s already offering in the intial post?

It is. There is one slight difference being that the ones posted used a flanged bearing like those that are found in enertion 36t flywheel pulleys. Which means if you use modified trucks for enertion drive train parts, these are now interchangeable if you buy a baggy of bearings. With the benefit of getting to chose a more custom gearing or possibly the Kegels instead on your enertion builds

I still don’t follow, do @mishrasubhransu’s pulleys not use flanged bearings, but regular 608’s?

Yes, @mishrasubhransu use 608 bearings. But his pulleys also look like they extend past the back of the wheel a bit from looking at his original post. I think, unless it’s changed or unless I’m completely off and it was just all the colors messing with my eyes.

Ooh yes. I didn’t see. From the pics I just thought it was for the Kegals. My bad.

I used regular 608 bearings, but can easily be modified for the flanged ones. What the advantage of using a flange bearing here?

If you use a normal bearing, like on yours, you see the thin film that holds it in place, like a disk that is attached to the pulley. It’s probably 1mm thick? That ring you have even though you engaged the full frontal face of the bearing, it’s only attached to the rest of the pulley by the radial area of where it meets the rest of it. That 1mm x 22pi area is what is taking the load on your pulley in terms of axial loading, apply a lot of torque and the belt will try to pry the pulley put and away from the hub. So that’s taking lateral forces which keep the pulley in place.

The profile of a flanged bearing is 22mm diameter, 7mm width with a 1.5mm thick flange and its 25mm in diameter that comes back onto the bearing itself. So you get 1.5mm of flange at 25mm and 5.5 mm of bearing at 22mm. So you have all the material at 25mm x 5.5mm thick holding in your pulley. This is made possible because on these pulleys, like enertions, the flange is on the inside and it sandwiches the entire width of the pulley (where the bearing is placed) between the flange and the hub.

Does’nt cutting part of hanger OFF weaken the axle ??,…now the wheel is at the end of a longer bare unreinforced axle ?? It’s such a small part of the hangar, it has minimal effect on integrity. I haven’t heard of anything bending their axle due to chopping off some of the hangar.

I cut by eye with a dremel. Just guestimate for 90 degrees when I start cutting, then just follow through with that cut all the way around. Hasn’t failed me yet!

I emailed Orangatang a few months back and suggested they make a Bigger Kegal wheel for the e-skates,…they were losing out to Abec 11 90mm !,…they responded they had something gargantuous coming out in the near future ??

I actually thought Enertions new wheel was it , but emailed again and they said no.

Just using rough numbers since I don’t actually know how thick you made that disk thing. Assuming 1mm Vs standard dimensions of the flanged bearing quoted. @Randyc1 cutting off a 7-8 mm portion of the hanger does weaken the impact the structurally integrity of the axel however it’s not much.
Here’s another hand drawn explanation. You can see that the effective moment on the axel, F is actually brought in by half of the amount cut off, here equivalent to B the thickness of the bearing. But if we examine the affects that this has on the individual components of F, on the axel, relative to the plane of the end of the hanger we can see three things.

The first is that the force on the inner bearing doesn’t change. It will always be 1/2 B at a force of F/2.

The second is that the effective force is actually brought in by 1/2 B relative to the center of the hanger but relative to the perpendicular plane to axel, we’ve moved out by 1/2 B. So there is still the same overall force being applied but we’ve increased the moment at this point.

Lastly, you see the end force is also translated by 1/2 B, in reading the moment seen here due to the same weight.

With that being said, these things come with a fairly high factor of safety. They are meant to be ridden on and meant to experience great impact forces as well as fatigue. All these things have been accounted for in their design, I would know, I do this stuff at school and at my workplace for the past year and almost three quarters. You’re just going to end up reducing the factor of safety from say 3 to a 2.8 or 2.7, it’s so small it’s insignificant.

Especially once you consider that once you go electric, you’re not invited g your board all over the place and doing crazy jumps with it. Unless you’re onloop and you’re showing your board doing an ollie or kickflip but oven then that’s nothing compared to what it’s meant to endure. Hope that helps.