I drew up some shims for lowering a longboard deck in: 5mm, 10mm, 15mm. Sizes. For a few months, I’ve been testing the 10mm ones, printed in ABS, to drop my old longboard deck, for commuting. I haven’t tested the 15mm one yet, but it has a little bracing to keep it from twisting.

You will have to make the final determination as too if they are appropriate to your rig or not. Please heed the warnings, and ride safe.

I was surprised that I’ve not seen these for sale? 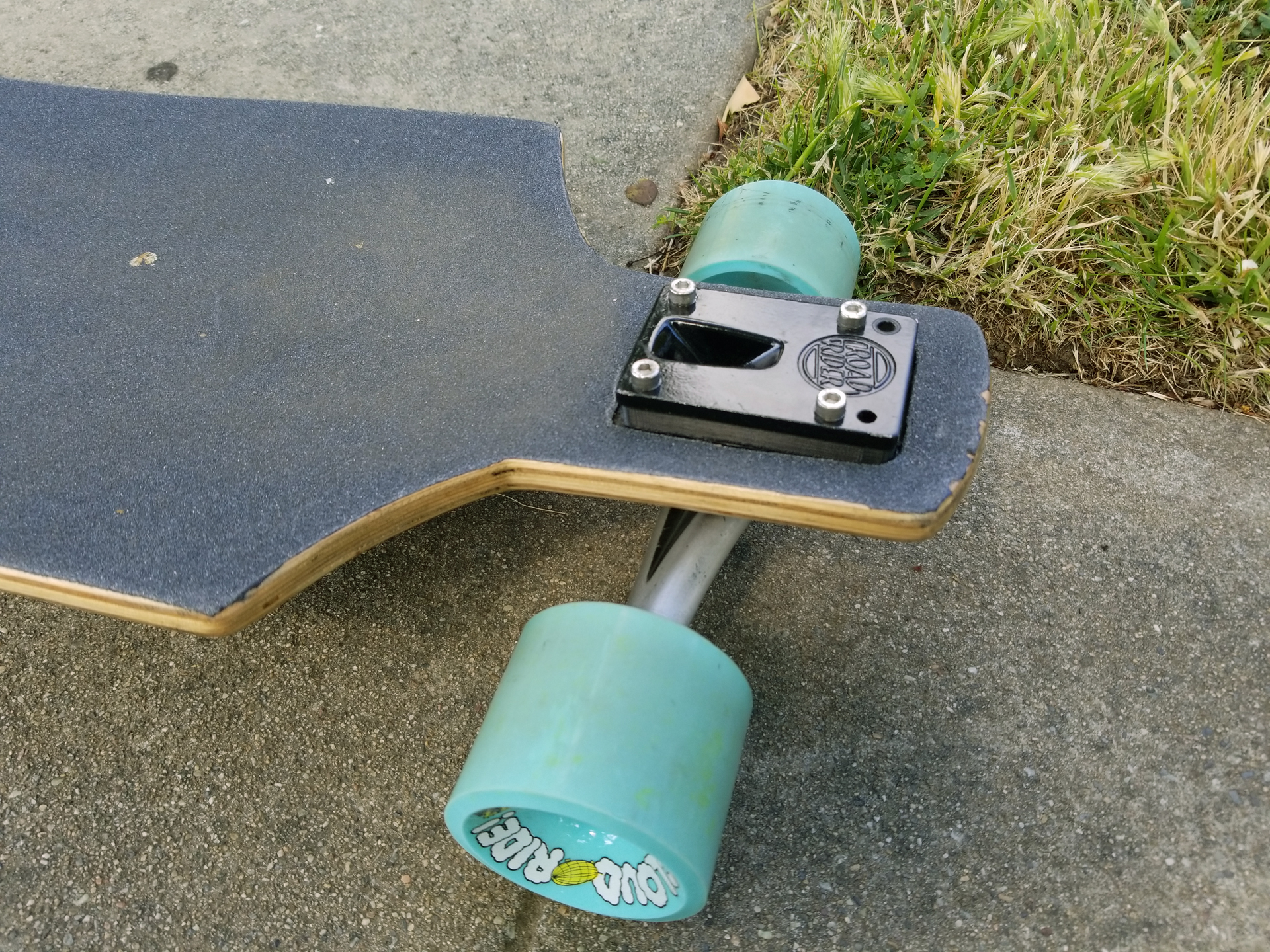 These lowering shims to allow a longboard/skateboard deck to be lowered in three sizes, 5mm, 10mm, and 15mm. Please Donate: https://www.patreon.com/brendaem You likely will need longer fasteners. Nuts should be locking-type, such as nylon locking...

They are called Risers. Print them in TPU and you will get better results.

These are for lowering the deck, not raising it.

I’ve seen setup where people just too hung their decks with long screws and/or used washers, but that puts a fair amount of cantilevered and shear force on the screws. It’s not like just using screws and washers instead of something like this is likely to break, but without fairly solid spacers, the screws will want to lean over, and take some of the rider’s authority away from the trucks. The deck hangs from the very screws themselves on a drop-through.

I am not sure if TPU would be a good choice for the spacers themselves, but thin flexible isolators, like TPU ones still might be added.

Edit: the previews are now visible.

These are for lowering the deck, not raising it.

Yes, these are spacers to hang the deck lower. The 15mm tallest one is bridged, so it will be stronger. If you don’t know metric, the 10mm ones are about 1/2", and the 15mm ones are even lower.

Because I don’t have an e-skate board, presently. For me, it makes it easier to push the board on 3-mile trips, if it’s lower to the ground.

They are simple design, but I thought I would share them, for those people who have a printer who don’t CAD. They might be use for e-skateboards, as well. The 5mm ones might solve minor level or ground clearance issues. Within that, the standard rubber isolators would probably do fine.

The set I have been running, have given me no problems. Search for “lowered skateboard desk” and see what the alternatives are : )

Since when does adding substract? I don’t get this

They are made for drop-throughs. If you look at the pictures, you should be able to work it out, but…

With a drop-through longboard deck, until you lean it, the deck hangs from the screws the hold the truck on. So, with the longboard at the top picture, if I someone unscrews the trucks, while I stand on it, the deck will fall down against the hanger.

I could take the spacers out, assemble it like the picture, put the nuts on, with just a few threads, and the deck will just hang from the screws, and leave a big opening around the truck.

So, the thicker the spacer, the lower the deck and rider, as long as the truck doesn’t hit the deck when leaning. Fastened with longer than stock screws, now the deck is almost a half and inch lower than it was.

The spacers help constrain (bind) one of the six degrees of freedom. In this case, using the roll, pitch, yaw (configuration space), they help constrain the roll axis of the board in relationship to truck, so that…it may turn, by the means of a virtual hinge axis which can be drawn from the center pivot cup to a point in the center point of the hangar bushing hole.

And once you hit a bump or push the board forward (if you have no motor for it), or do anything to compress the bushings–or even the wheels, or even bend the board, then, well, it gets complicated.

Anyway, I think they will work better than a stack of washers or nuts, and I wanted to share them with people.