All the available Speed Controllers (ESCS) For Esk8 USE (GUIDE)

I will slowly update the list and possibly with text descriptions / quotes from other riders, so that we know a bit more ‘behind the horizon’ besides a few options we have or know of.

‘Usable or managable’ ESC’s suited for other industries primarly but still decent enough for esk8 purposes.

FVT 120 12S - ‘Sleeping Lion’ (looks promising so far, @Idea has spent a lot of time dealing with it, powerful, might need the right configuration / version to run properly - with brakes and good throttle/brake curves, @laurnts might know better about the existing versions ) 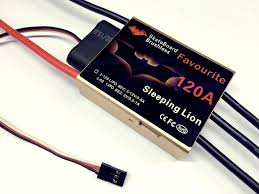 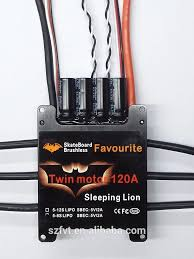 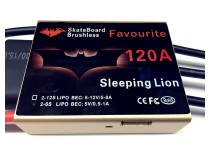 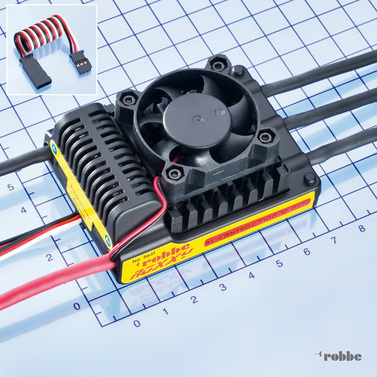 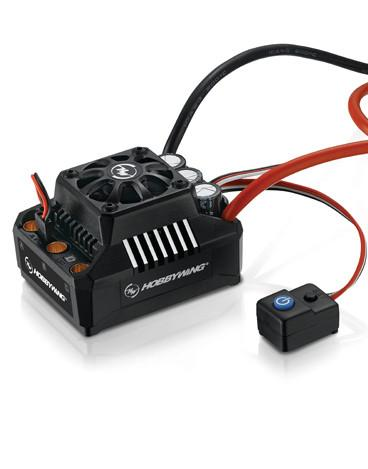 Other Skateboard Parts for sale | eBay

Get the best deals on Other Skateboard Parts when you shop the largest online selection at eBay.com. Free shipping on many items | Browse your favorite brands | affordable prices.

Ok as of now I will end here, I hope this brings out some sort of discussions… also tips on how to edit and then later post its final version for everyone to see would be a good idea, otherwise as of now only me and maybe some mods can access the topic to edit the content…

Pictures with each esc would probably be also very welcome… if someone feels spirited enough to complete this sort of ‘walkthrough’ that would be great… I think it was time some new / compiled stuff surfaced… so I hope the trend continues and other people will also start making more tutorials, which might be missing in the forum or the info is hard to find in general and takes a lot of reading…

What about torque boards 120amp esc

@darkkevind Thanks, I was actually thinking about including this one.

I know it has great potential as it sort of comes from chinese esk8 manufacturers and also the price is very affordable and their nano remotes seem to work quite okay, even if I have heard they are a bit sensitive due to small trigger play.

I started to assimilate your post here into the online tool I started some work on last week… I’ll get this thing posted to github and on github pages that way it’s outside of plnkr and can more easily have other people fork it or put in pull requests… I can also break up the JS script so it loads the data from different JSON formatted data files so it’s easier for other people who don’t dabble in JS to update. 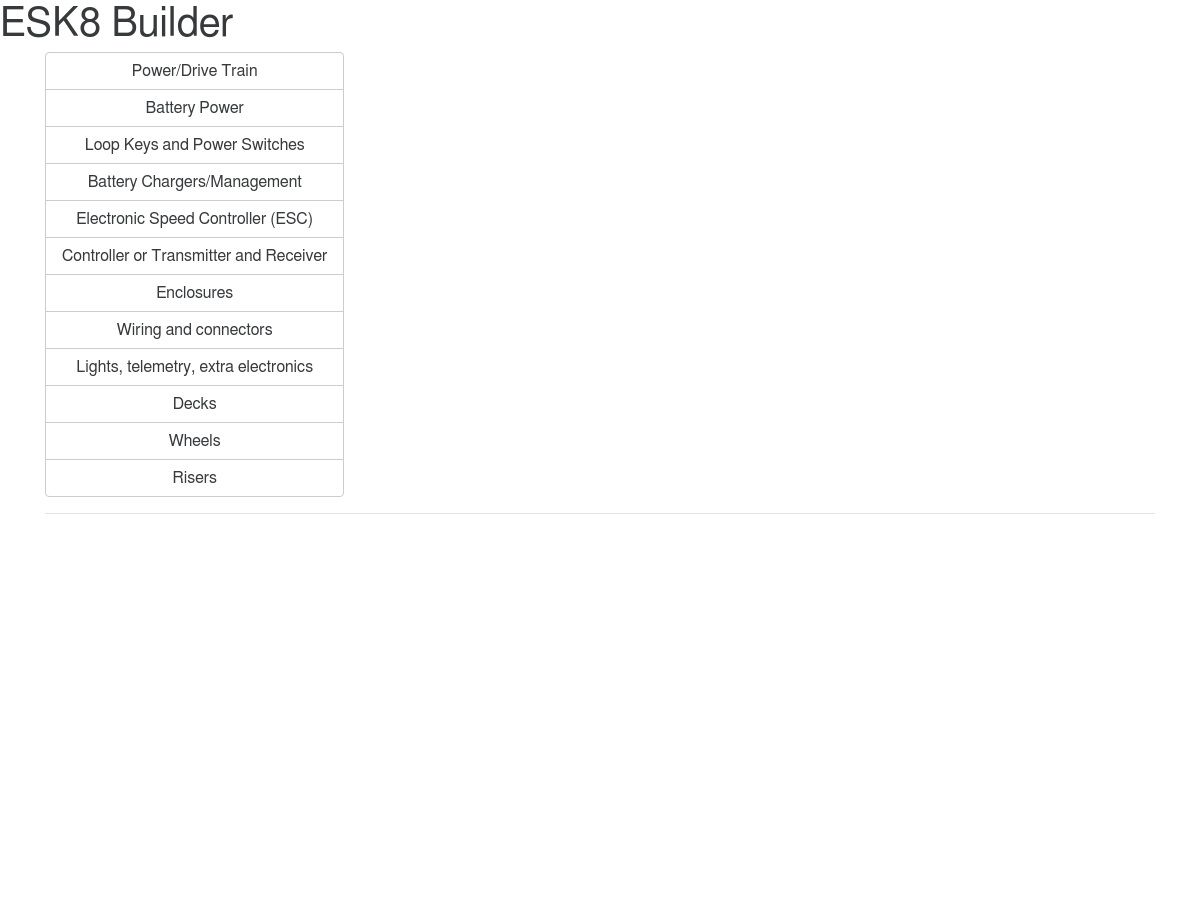 Created on https://plnkr.co: Helping you build the web.

Thanks for the write ups so far too

Looks good! I like the style and how fast you managed to implement this info

Is it possible to switch over automatically to ‘visitor view’ ?

Yeah plnkr is great in terms of throwing things together quickly and seeing the result immediately on changes but isn’t super great with the collaboration parts so someone can fork my plnk here but I don’t think there’s any way to really merge things back together (hence wanting to move it to github soon here). I’ll post an updated link to github once I clean things up and get it posted there, then basically you can make a “Fork” on github that is your own copy and can edit that then send the changes to me to incorporate (or if I disappear you just have your own copy with updates). I’ll try to make a short write up for people who want to contribute on what to do exactly in case people haven’t used github ever before but think that’ll be a better long term option (also keeps me or anyone else from having to host it or be the sole maintainer). I think I can also add trusted maintainers to the project so they can update without asking me, but will let you know once that’s in place.

Plnkr does have view only as well here:

but like I said just for the sake of future proofing and all think I’ll move it over to github later this afternoon sometime.

Sounds good. I didnt get ‘spectator’ view but non the less, you can complete the transfer to github and then shed some more info on how someone should join or access it later.

If you can, can you give a few details what have you made so far?

I know u had a topic about, but in which one it is precisely?

Yeah someone else actually asked if this existed and it didn’t so we started discussing making it and I decided to give it a go.

Is there a PC part picker type of website but for esk8 parts?

Do you guys know if there is a website like PC part picker but for esk8 parts? That would be awesome and I would be less confused. Slowly figuring this out though.

For each type of component I think there needs to be defined specifications that can be filled in and also what type of data they are and if they are required (so I can calculate some things like top speed or wattage or price based on choices), but that’s more long term thinking, for now just want to get the code organized to make it easier to update parts and not get one big bloated file you have to search through to edit anything.

Ok, thanks for the link, yeh I found it a few days ago but didnt bookmark… Wish I could help but im not so much into programming…

Otherwise if you make something workable, where each end user could somewhat update the text or create ‘categories’ or blocks, I think it could work okay (probably also depends whenever there is interest from the outside in the first place to work on this and update it over time… )

Cool yeah should be easy enough basically I’ll split all the top level categories into their own files with appropriate names and you’ll be able to go in there and basically edit the blocks (only thing to deal with really is escaping quotes because all the things are already “quoted” so if you need to use a double quote in there you need to use a \ before it). Yup same issue with not having time to continually work on it but don’t mind getting it setup so hopefully others can also add in what they know or add to it over time. 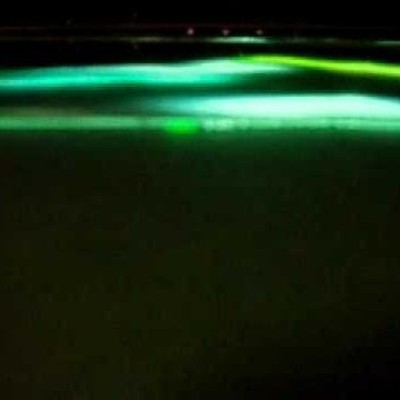 Repository for the esk8builder tool. Contribute to shusain/Esk8Builder development by creating an account on GitHub.

^^ transferred the stuff over and started splitting things up to make it a little easier to add extra functionality in the future. I’ll need to do some more testing from a new account on github to see how editing those files actually goes but everything after a change is accepted is automated to do some basic checks and deploy the code.

Long run can have some sort of forms for user submitted info to make it easier for non-dev people to contribute more easily but that will require some sort of database (was looking at firebase since that can be used for free but who knows how long Google will keep that alive… anyhow is what it is for now).

Will include later on, thanks for reminding

Now a Chinese company Flipsky also made ESC base on Vedder 's VESC. They also produce ESC4.12 and ESC V6. Maybe the list should add Flipsky.

I recently found out about @stewii’s ESCapes so I think they could be added in here?

Yeh i guess list shold be updated now. Will try to that when at pc

Time for an update dont you think?

Havent had much time lately. Would be great if moderators would allow someone else to update it also.