Hey guys. I just upgraded my 600 mile board to some new motors that I purchased from someone that was part of one of the @barajabali group buys for his silver motors that he gets from somewhere in China.

Before upgrading, I had 2x Torqueboards 6355 motors and they worked great. Great acceleration and they lasted super long. I upgraded to these expecting that there would be a large increase in torque and performance, however after upgrading to them today and riding them for a while, I honestly can say that I didn’t really receive the performance increase that I was expecting. In fact, they felt almost exactly the same, if not a little bit less powerful.

I did notice that the brakes are stronger now, but really the acceleration feels worse. Does anyone know if there is something that I did wrong or have experience directly comparing 6355 motors to 6374? I thought for sure that the 6374 motors would have more kick. 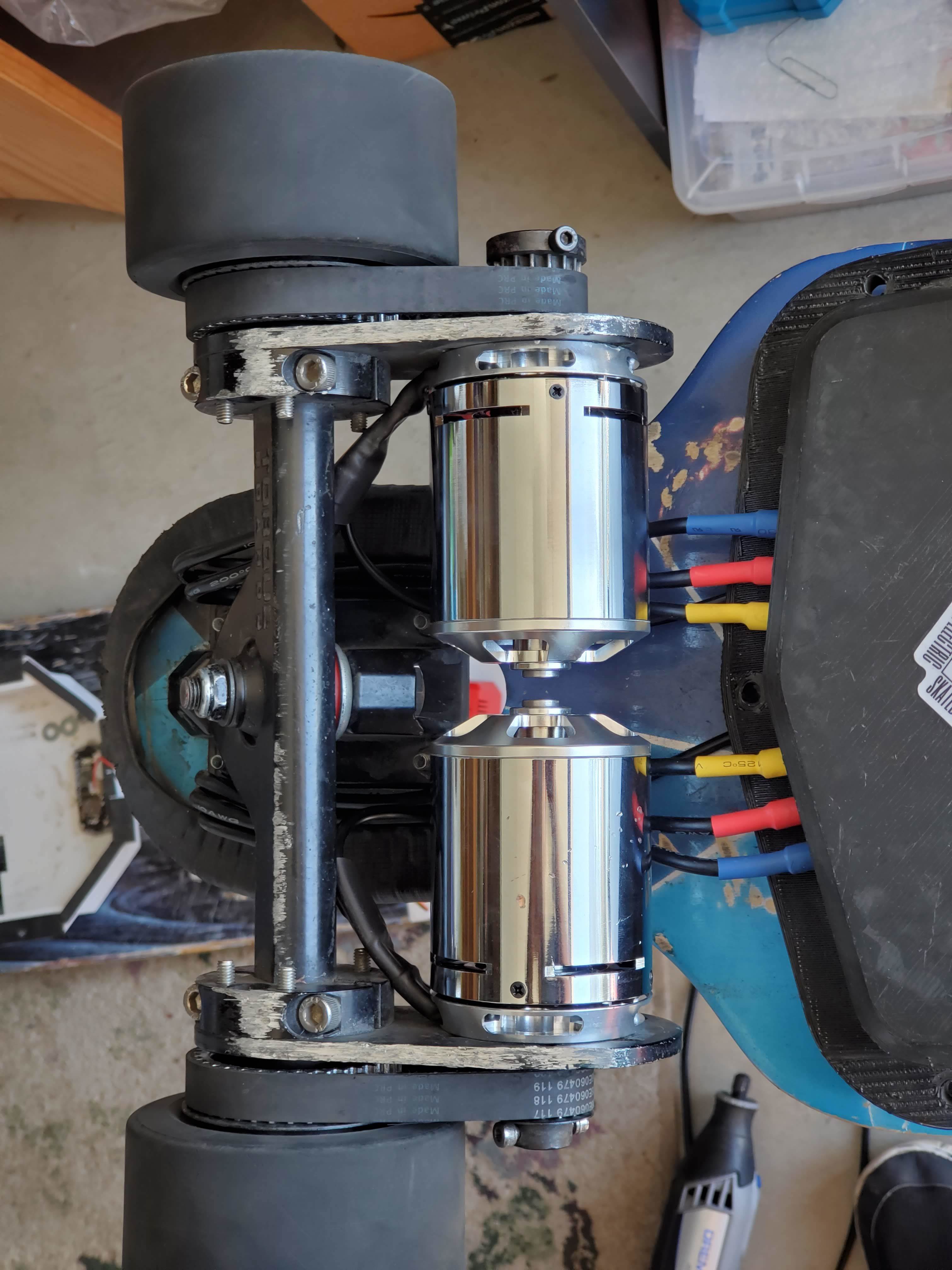 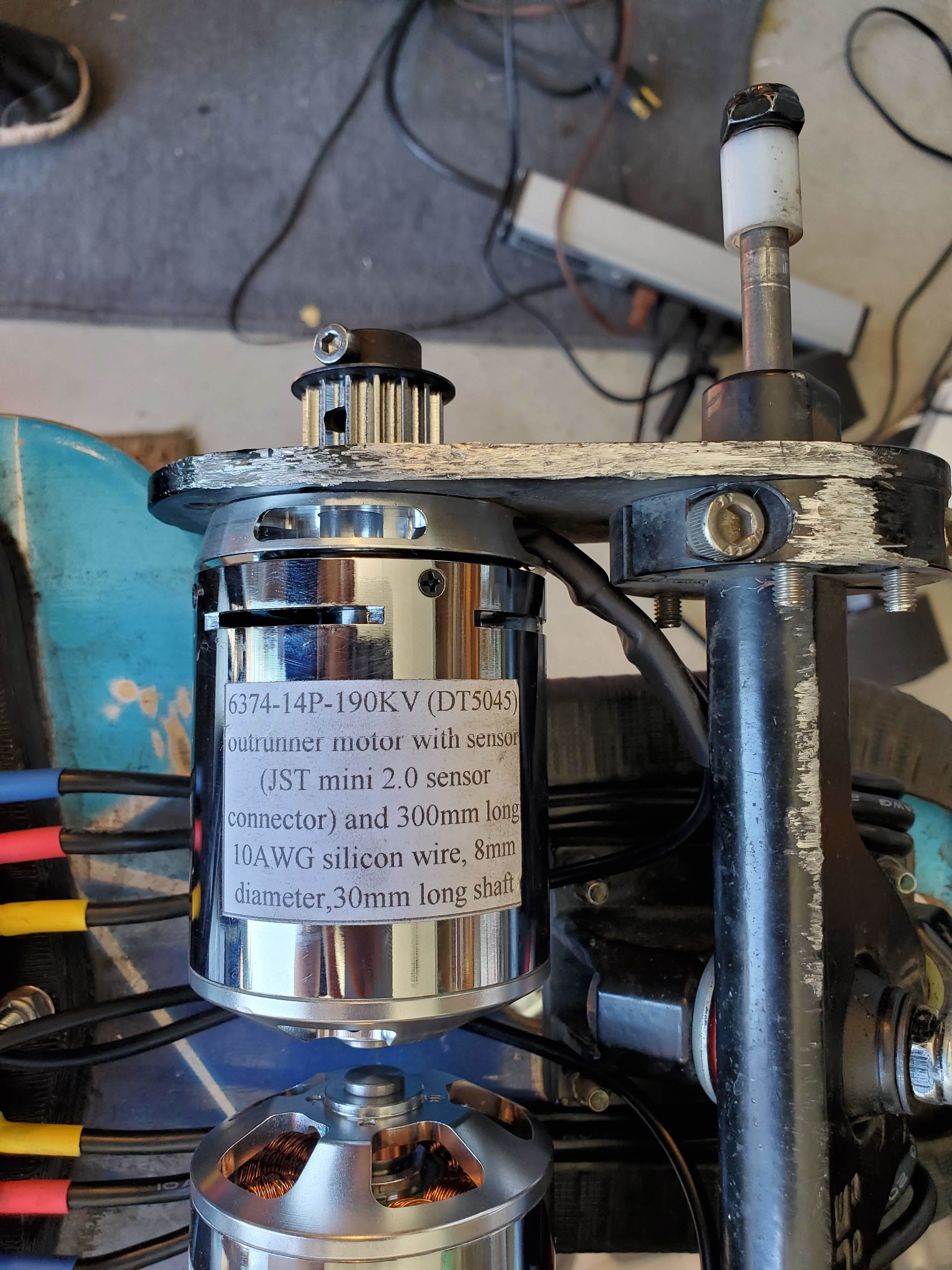 I’d really like to know if I somehow did something wrong here. I left almost the same vesc settings. I am running 12S FOC on two FOCBOX’s. The motors are pretty much the same as the 6355’s, 190KV, sensored, etc. I am running them at ±80 motor amps, although observing the logs from esc monitor, they never even hit more than 50 motor amps per motor. I have the battery amps set pretty high as well. If you are interested in seeing VESC settings, let me know and I will get some screenshots.

Its my understanding that 6355, 6365, 6374 are all the same strength but the bigger motors stay cooler while doing it.

You might be expecting a difference in performance because of switching brands not size.

Lol that’s funny cuz these actually got way hotter than the torqueboards ones.

I always thought that the 6374 motors were stronger. What would be the point of upgrading, especially since my 6355 motors never got hot in the first place.

Probably not. Feels like I just wasted money tbh. I thought about getting the TB 6380’s but the price was holding me back. I got these for 100 each.

I’ll help you out and depose of those Chrome paperweights for you.

At least they look dope…

Honestly other than this my luck has been great with the hobby so far (5? builds) This is the first time I got really disappointed by a purchase.

They do look amazing though and they sound a little different than the others. I mean if you have some 6380’s lying around that you wanna trade for

Lol i traded my 6880 maytechs to psychotiller for some 6369 maytechs and a few little bits to finish a build. Honestly trying to run the smallest motors that meet my needs on builds for now on. Lhb builds rockets with 6355. A prefer a more narrow stance if possible.

Fair enough. I know mine was super quick with the 6355’s too but I thought I would get more from upgrading

I had kinda poor luck with those as well. But experiences always very so much it can be hard to say what is best.

Should make a thread discussing motors sizes/ performance in that other place. Bit more active.

There’s a older thread here talking about 6355 vs 6474. But a fresh discussion wouldn’t be a bad thing.

Just remember sk3’s may get hot but are nearly indestructible.

Lmao I just watched that edit. I suppose I should have went with a 170kv or something then. Idk man.

Maybe you don’t jump of curbs

Yeah I thought about it but there’s no Electronics category. Guess I could stick it in mechanics?

I do and my TB motors give zero fucks.

It took a my motor hiting a curb at 30 mph directly to fuck it up.

I like for my components to last. I think that’s the most important quality. I haven’t ran any bench tests on these guys but I know they are the only motors I’ve ran and not have had any failures (I think most who have ran these can attest to that)

They do get a bit warm but it’s nothing that concerns me, they level out and are never too hot to hold on to at all.

Are you running sensors? I’d like to see the screenshots. You really should be getting a performance upgrade with these motors. Also, did you increase your settings after installing these new motors?

Probably not. Feels like I just wasted money tbh. I thought about getting the TB 6380’s but the price was holding me back. I got these for 100 each.

Even though these were a group buy and not a profit driven sale, I’ll still offer to buy them back from you. As long as they’re not beaten up. That’s how confident I am these motors. Just send me a dm bro.