Hi guys! Basically until one week ago I was charging my battery 10s3p 30Q up to 41.2V to increase the life span, since I had a bms for charging and discharging. Now I change the BMS for charging only and the last week I notice that I reached home with the battery being 10-15% lower than usual. Therefore I decide to open the charger and set it back to 42.1V instead of 41.1V. Then charged the battery but it only reaches 40.2V instead of 42.1V. I checked the charger and it outputs 42.1V but stops charging at 40.1V. In the past with my charger set at 41.1V the battery reached 41.1V. Do you know what could it be? Thx

I then turn on the board and spin it. Then connect the charger and this time stopped charging at 40.7V instead of 40.1V. I hope it’s the charger that is not able to read the V from the battery anymore.

Yeh that was my fear. It would mean open the battery pack again

then I do not understand the purpose of bms if the cell are not balanced anymore.

Yeh is the bms. I open the enclosure and basically my bms has leds to show when the single cells reached 42V… 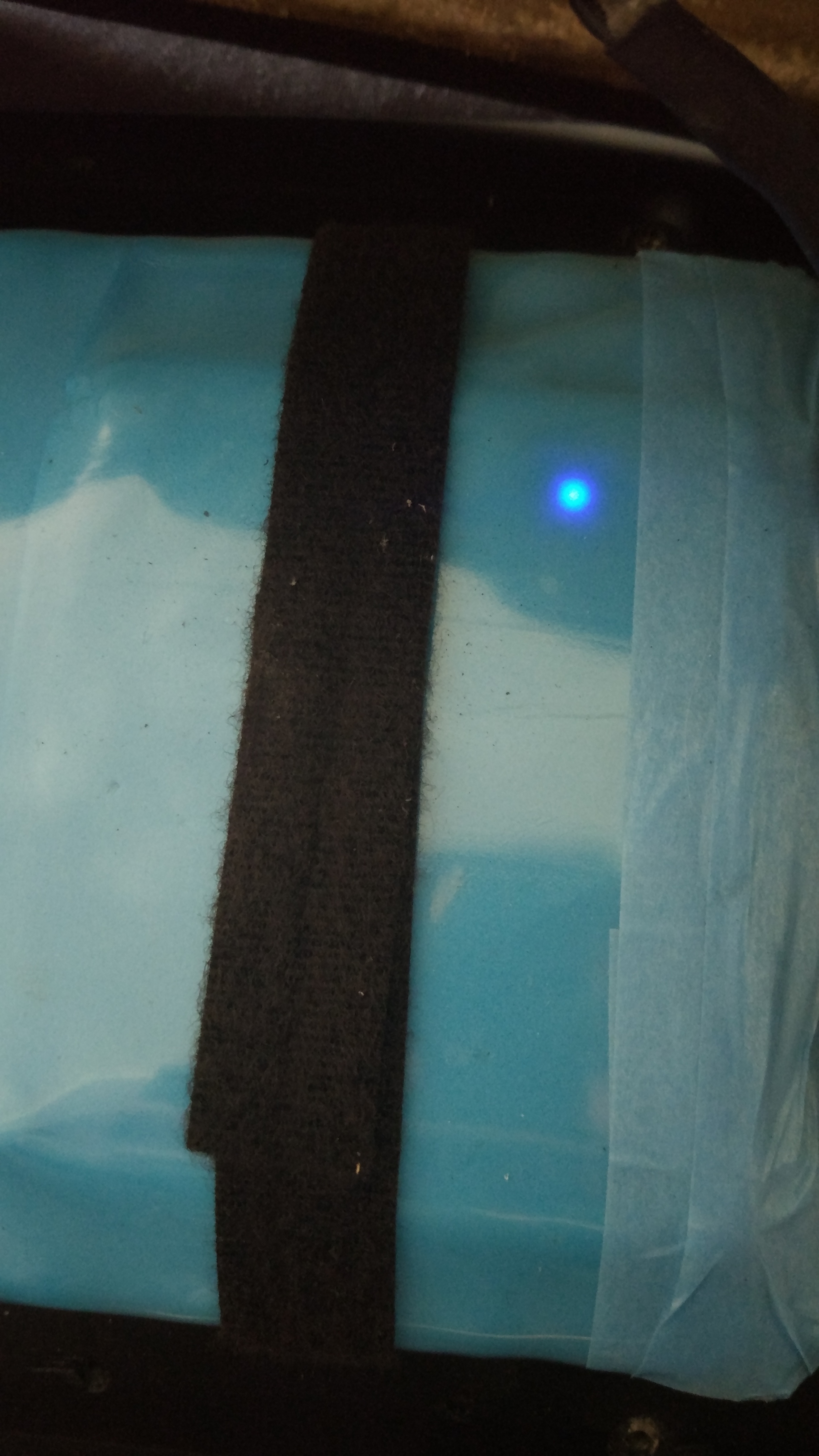 As you can see one of the led is on. Basic Aly it has led to show when the single cells reach 42V. 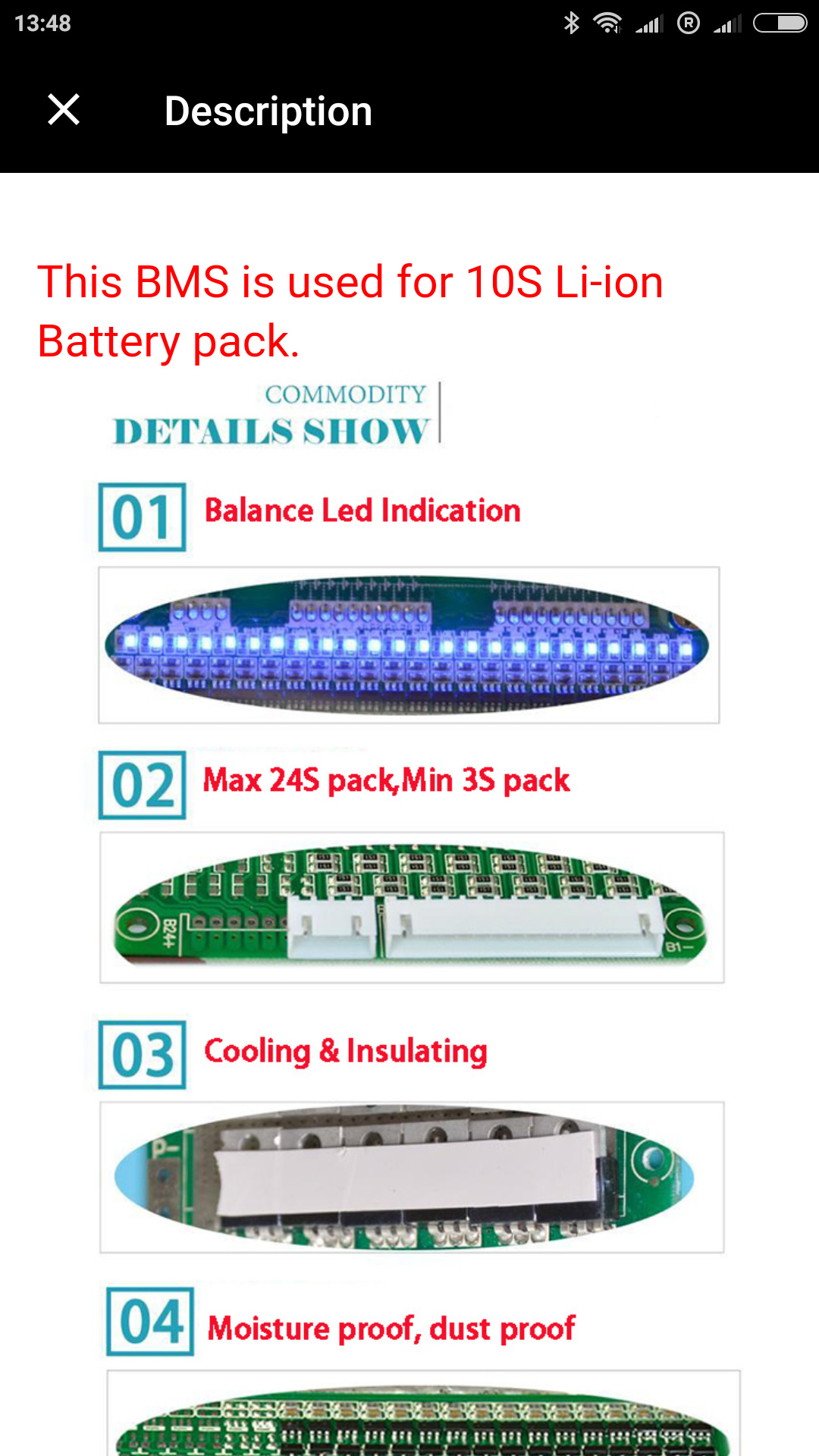 Then I do not really understand the purpose of it. It’s gonna to be worse over time. How can I solve it?

my suggestion is ride the board until u reach soft cut off and slow discharge at home till safe limit. then try charge again. (check the cell group with meter) 18650 tensency to discharge and match the voltage. Fast charging can cause unbalance like you.

I think we all have to face this issue sometimes as we use regen brake. which kinda aid this problem, unless you use discharge bms.

btw I haven’t tried BT module bought from you. is it just plug and play or do I have to set something? give me a short note

Thx for answer. My was discharge also, I just moved to charging only one week ago and that was enough to unbalance it. I do not really like this behaviour, since I do not fast charge the battery.

I’m sorry to hear that.

I think you have to open the pack and discharge problem pack to match the others.

Yeh but how to discharge the problem cells without remove the nickel strips? Moreover it will be back again in one week

hm, just a guessing but bms could be defective.

oh got an idea, if you charge it at lower voltage like 38v or 39 and try continue charge till 42v this might do trick.

and for discharging take the problem balance wire (+lead) and clip or use magnet to connect with - lead. like magnet press coper wire on top of battery. and connect those wire to hobby discharger or small light bulb. I fixed many labtop batt like this.

Thanks for the idea for discharging. On the other hand I don’t understand what you meant with charging at lower voltage and then try to keep charging to 42V. In my mind the bms charging only does the job when you reach 42V and only there it will adjust the cells between each other. Moreover It can only balance small difference not huge gap. Do you think bms balance along the all charging process? Because otherwise I do not understand how can be that the cells are unbalanced now.

I meant charge the pack to 38v and 39v 40v and so on so you give the pack constant 38 voltage. if the pack reach 38v it will no longer charge higher than 38 because you only give 38. than you go to 39v the pack will stop at 39v and so on. it might work or not. I havent tried this myself. but Idea is giving other cells enought time to catch up problem cell group. that way they may match at lower voltage and start charging together to the 42v.

I have no idea how bms works but looks like yours only thinker at the end of voltage.

Ok got it. I am now discharging the battery on the bench. It will take a while and then I will try to charge at lower V. The thing is that I only have a 10s charger so I can not decrease and increase the V too much. It only allows few V adjustments. I think that most of the bms for charging works like that. Only the discharging function is constantly working. I will maybe switch to a Bestech or similar if they are more reliable.

Forget all that have been said. First check the cells voltages if they really differ from each other. Maybe the BMS is defective so that it thinks one cell is already fully charged but isn’t in reality. If one cell is really fully charged already then leave the pack connected at the charger for a couple of hours because now the BMS needs to balance the cells which can take a long time when the balance bleed current is only 50ma or somewhere near. The BMS shouldn’t balance during discharge and it also can’t do that when the bleed current is so tiny and we only brake for a couple of seconds.

When you charged the pack to less voltage then stupid BMS can’t balance the cells because they only start to balance when the cells are fully charged.

If the cells voltages really differ that much from another then there also must be a reason which you should try to find out. Maybe one cell in a parallel pack lost a nickel strip.

Ok so now the I discharged the battery to 36V, I will plug it and leave it for hours after the charger will stop charging. Do you know a BMS that either I can use it charge and discharge, without the problem of cutting the brakes as I had when my bms was discharge too (but at least the cells were balance at that time I belive), or one that is for charging only but does balance also during the Haring and not only when battery is fully charge. Thx for the help

You don’t need to discharge, doesn’t change anything.

Problem is that it would be wrong for the BMS to start balancing when the battery has a low voltage and get’s charged.

Let’s say fully charged all cells are exactly at 4.2V. When you discharge a 10S pack to 30V then one cell might be at 2.9V another one at 3.1V, another one at 2.95V, another one at 3.05 and a couple at 3.0V. Because the cells are not perfectly evenly discharged. One might have a capacity of 2900ma and another one has 3000ma. So during discharge they can differ from each other. So if the BMS would kick in immediately when you charge it it would lower all cells that are above the lowest cells from the beginning. And when it is then close to fully charged it needs to lower the the cells which were at 2.9V at the beginning because they would have a higher voltage as they have less capacity. So it makes sense to only balance when the cells are close to beeing fully charged. A stupid BMS which is only driven by hardware can only kick in at a fixed voltage which is adjusted by resistors. And most BMS are like that. A smart BMS could be adjusted adjusted to balance the cells to a desired voltage of 4.1V.

Thx, got it. I actually do not know if my bms adn charger will work togheter. To me my charget stops charging once the Voltage is reached and that’s it. I ma now charging to 41 V, then I will charge to 42V. On the other hand I was thinking whether could be a good idea set the charger a bit higer, like 42.7V so that the bms has more time to balance and the charger will maybe keep trying to charge the cells. What do you think? too risky? Do you know a good BMS that does is fuxxxing job? I do not want to facing it every week. I do not know who doesn’t use any bms how can not have unbalanced cells then.

I use lipos so different situation to some degree but just use a balance chargers (AR1 from keenstone is what I’m using, imax b6 is popular as well). BMS is mostly just taking this kind of balance chargers with you plus some extra features possibly for monitoring or balancing cells on the fly.

yes but than I need the balance connector available to plug it to the balance charger. Meaning there is no reason of having a BMS charge only. That’s why we use a BMS to be able to charge the board with a normal charger.

Right I wasn’t saying to have both a BMS and balance charger was just saying what people without a BMS do… should have quoted but was on mobile.

I do not want to facing it every week. I do not know who doesn’t use any bms how can not have unbalanced cells then.

This was one of the things that pushed me away from doing 18650 based packs (either buying a spot welder or buying a premade one). Seems everyone insists on hooking up a BMS instead of coming up with a way to charge with more reliable charger that gives you feedback about what’s going on and the health of your cells. I’ve heard good things about the bestech BMS but they come at a cost.

No reason one couldn’t hook up a balance connector (it’s just a JST-XH connector, just need a crimp tool and some connectors and time). Only issue then is getting a charger that can deal with 10S (they exist but more expensive than 6S ones). Another plus with dropping the BMS is there’s less components to get rattled apart on your board (getting rid of parts makes the engineering part of me happy).

Sorry I know this doesn’t help with the immediate issue but might be worth considering.