Belt destroyed ultra early! What belt and gear upgrade would be best?

So I been out to day on my 1st unfinished DIY build. Only on 1 motor working (Still wating on enclosher to arrive and replacement Vesc that won’t powered up! so much for quality control and testing that you boast about scramboards) named and shamed. Can only blame my self for over reading older posts on the forum and went with 4.12 with extra heatsinks should have read less and looked at dates of builds and got a foxbox. Think I’m the only persion to regret over reading 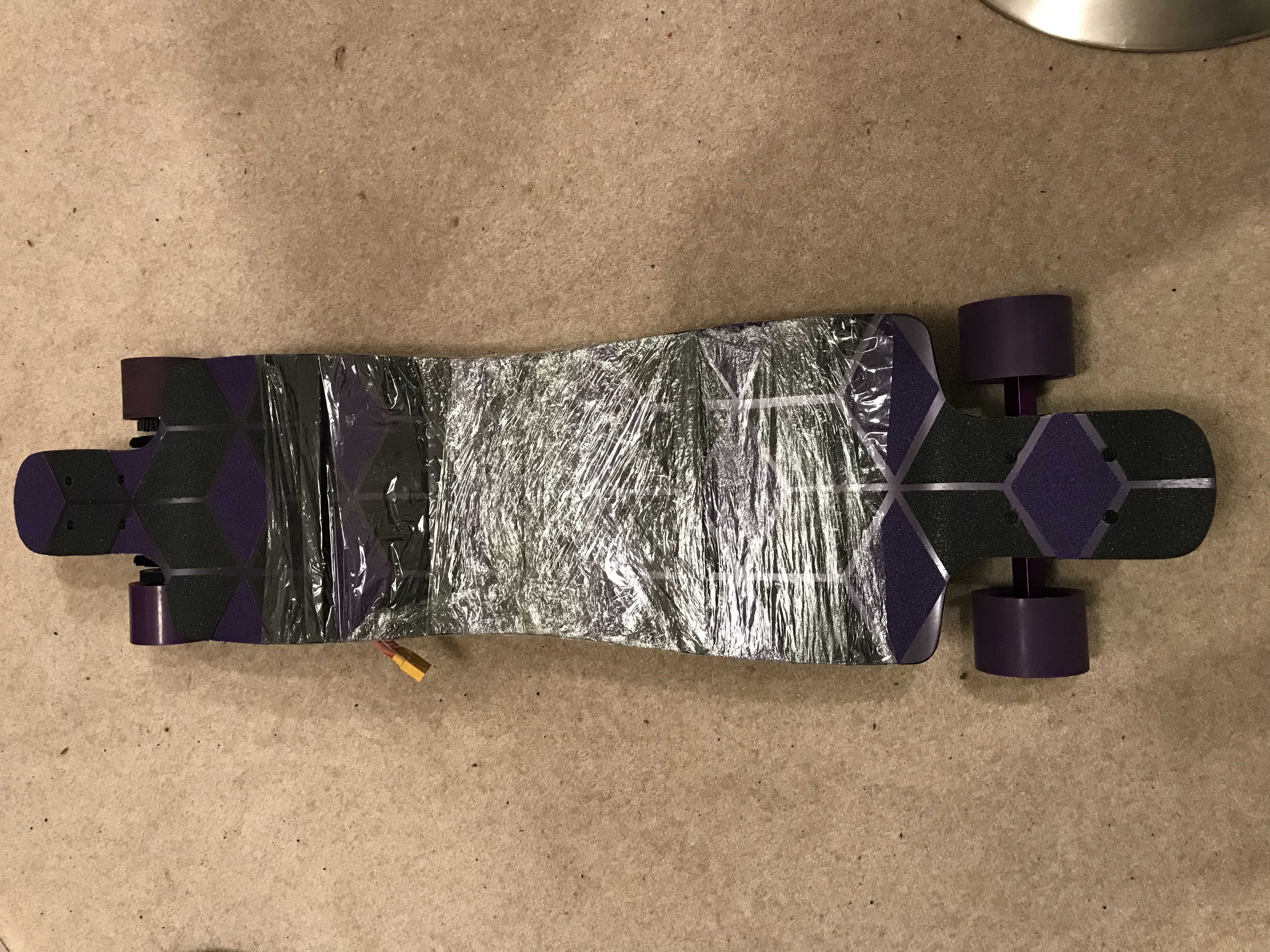 I’m sure you lot will have some thing to say about my temp enclosure.

Did a few trips up and down the street re tensioned the belt increased the braking power on Vesc set to -50 motor -12 batt regen, tighnened and lock tite bolts. Test battery cell voltage. Fully recharged battery’s 10s3p 25r (yep over read old posts and the spe looked better than q30 on paper) I think most of the normal things I’m guessing every one dose. Today I decided to push it a bit more with a trip down to the shops let’s say 1 1/2 miles down the road (eco me not using the car). 1/2 way there I felt what I thort must be belt slipping. Couple of clicks under braking. Must be stretching in as it’s new so I’m guessing it’s just bedding in. but the belt feels purity tight. I mean I think I have the brakes quite gental as it brakes fine at high speed (15 mph ish it high to me as a novis still working up to full throttle) but want it brake harder as it comes to a stop. Hoping the second motor will provide enough stoping power later when the Vesc replacement arrived (that thay charging me another 30% of the original cost more nameing and shaming scramboards). so took it very easy on the way back. Took it apart to look at the belt and it’s just ripping teeth off the belt not wearing them off as I’d exspect total carnige of hole teeth hanging off 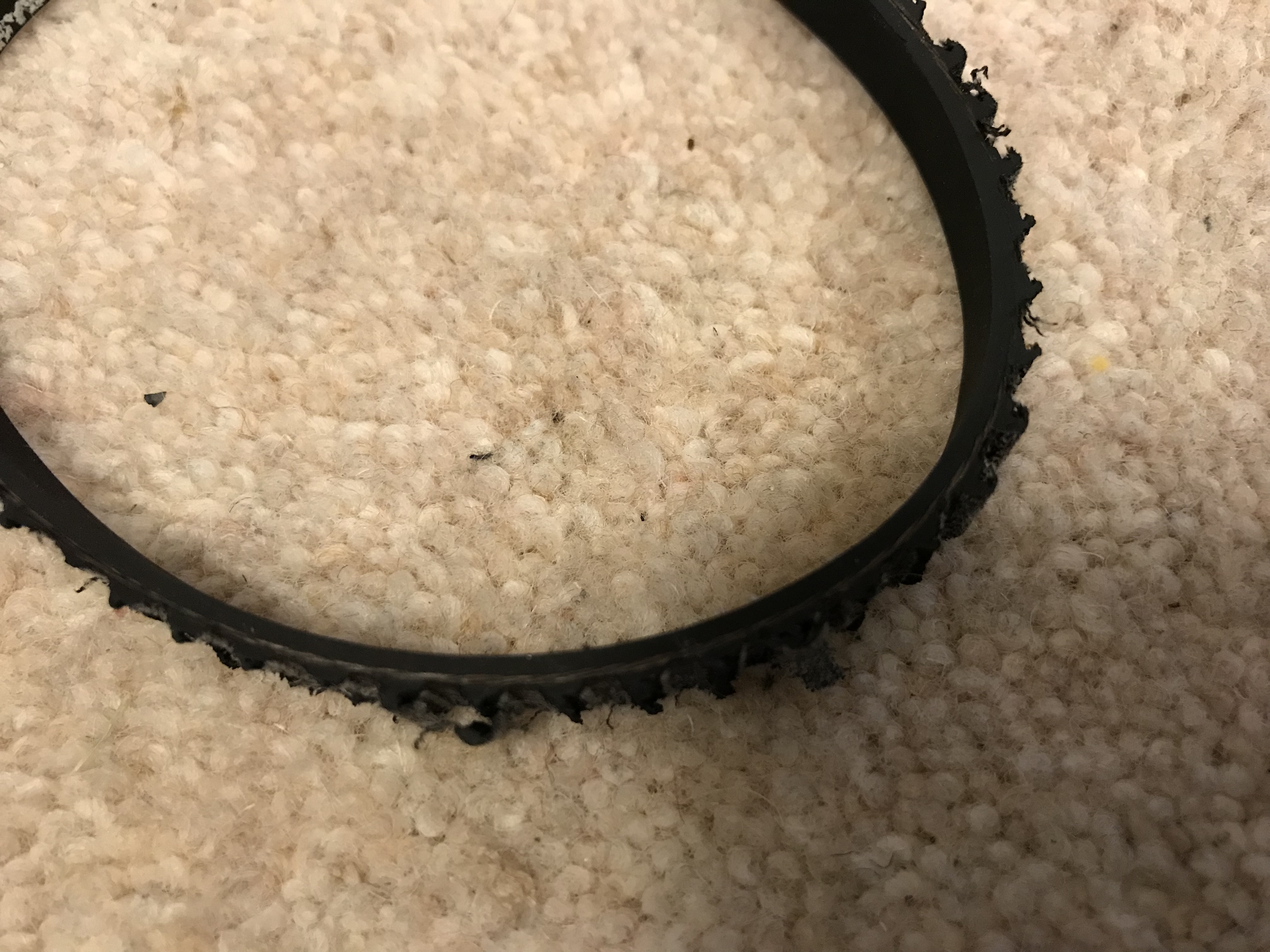 Is this normal were and tear from a 9mm alien power system belt with in its 1st mile. I’ve checked so many times the alignment and that motor sits perfect. with no belt movement from sided to side no matter what way you spin the wheels and it sits in the middle of the motor pully happily with out walking to a side

I don’t really understand how it’s so trashed I’m not raging it around yet as I’m not confident enough to. so I can’t be demanding that much from the system yet.

To I try a new belt from somewhere els

possibly a 15mm belt if I used some speed rings as there’s a few threads on the wheel lock nut exposed and upgrade the motor pully. 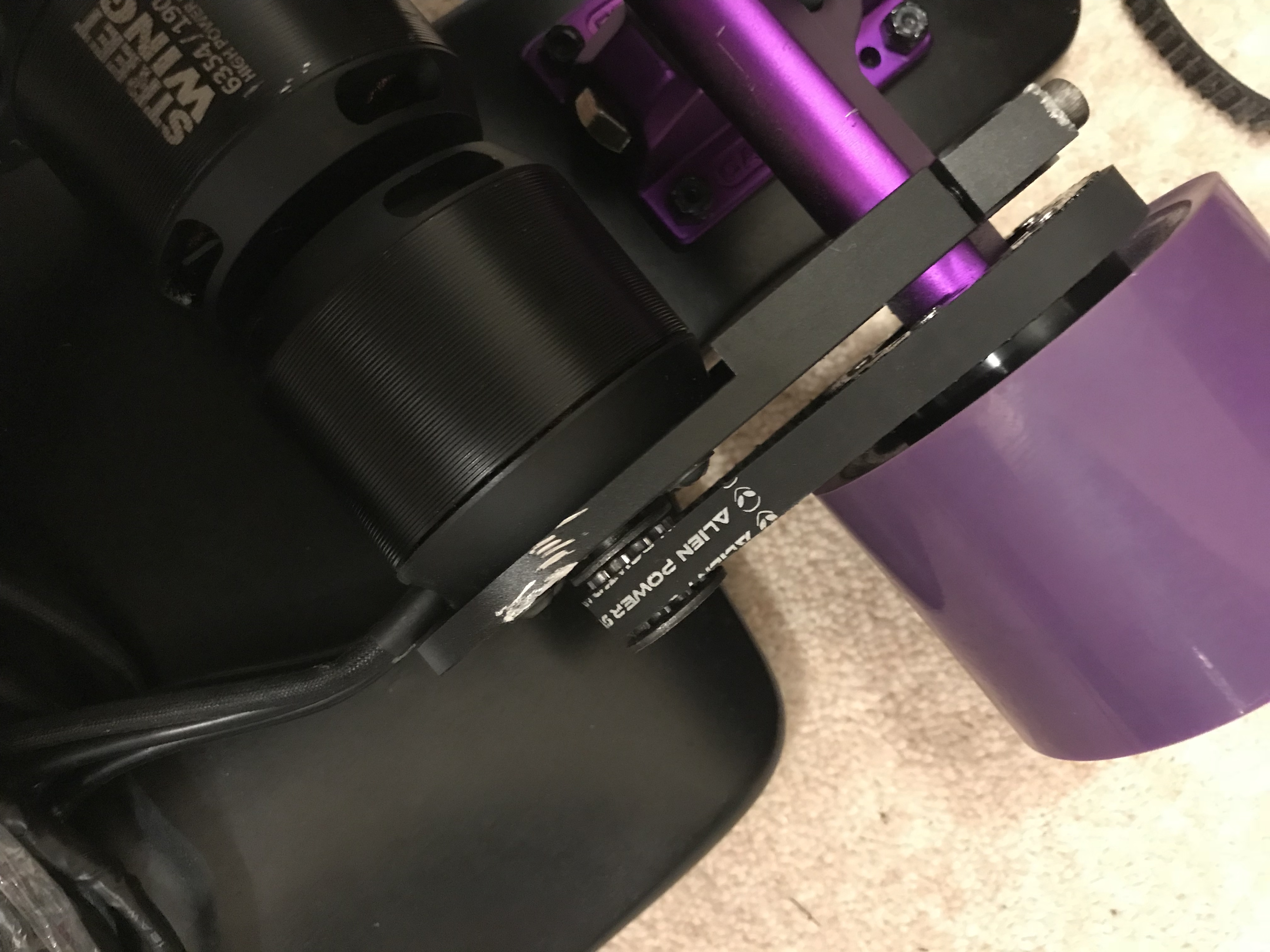 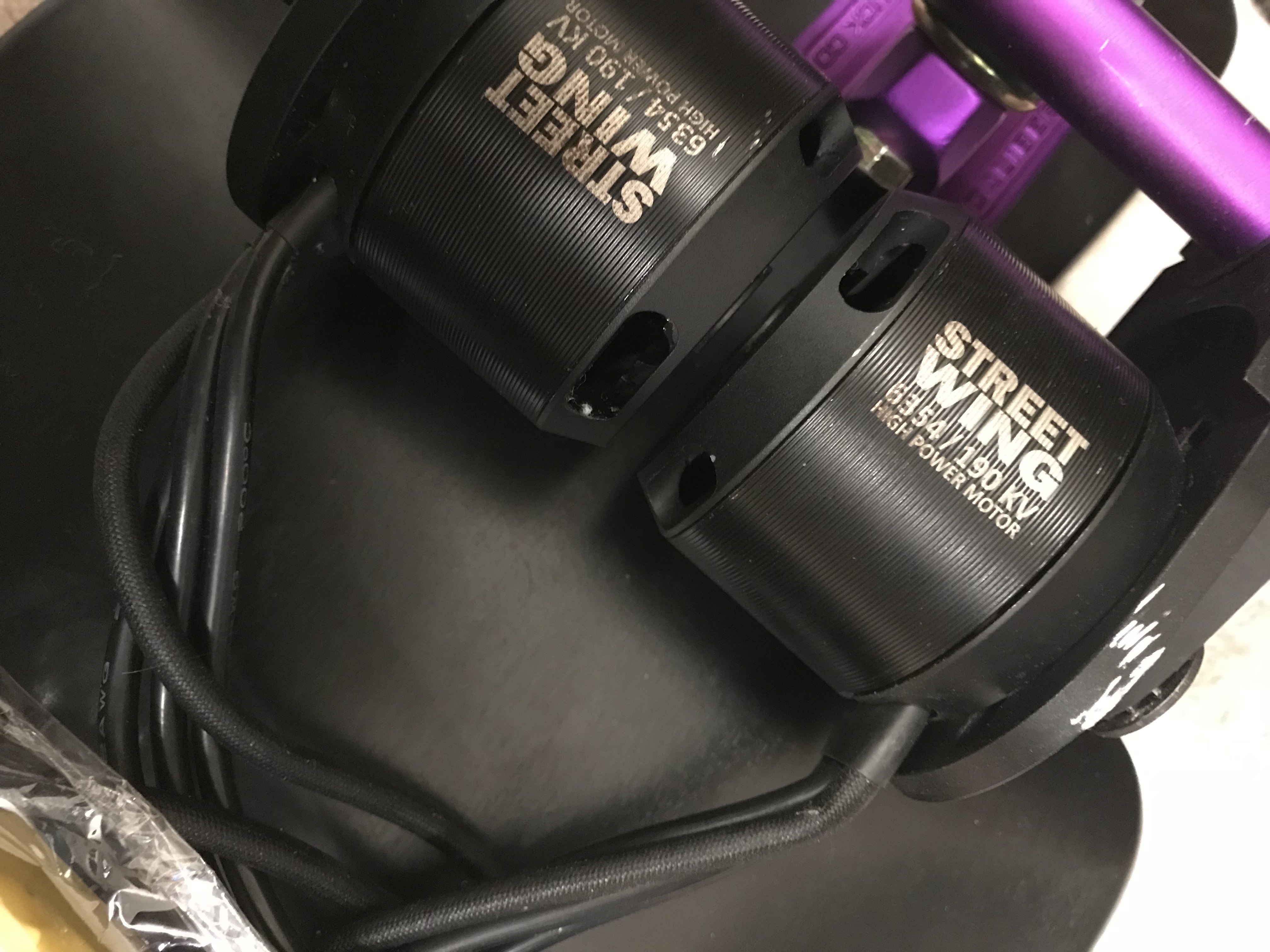 Is my pully bending the belt to much. I have a street wing 15T motor pully but i think is only going to fit a belt of 11mm wide max thay only had one in stock could get a 2nd?

Or something else I’ve not thort of

Yes I’m planing on running a slow 12-36 ratio on dule 6355 with 83mm Kegal wheels was thinking I could get use to it and get more speed later when I was more competent on a board.

Tiny belts=less surface area to devide force. Also getting aligment right first times isnt easy. Also, you’re not doing anyone any favors tightning the belts beyond infinity, they’ll wear out super fast and your overall coasting will be real bad. Belt should be snug but not too tight to easly turn the wheel by hand. I recommend 15mm belts. No more headaches with stripped theeth.

It didn’t even have a blinking led and pc couldent fined it it did warm up a little if left connected to the battery not hot just a little warm.

Dont cheap out on low budget vescs, you’ll end up buying twice the hardware. Think FOCbox is the most generic one, although I’ve never owned one myself

The Esk8.de direct fet vesc I used was good, and I’m having fun with the flipsky dual 6.6, though it’s voltage readings are screwball…

As @linsus said to get the right tension for the belt is not easy first time. It should be as loose as possible but still strong enough to don’t skip. The bigger belt the better. Of you can fit 12mm good if you can fit 15mm even better

9mm belts are no good, you will never be happy with them. Normally if it’s too tight it will snap, but I’m guessing yours is tight and not aligned.

Was hand spinning the wheels fine free wheeling several turns befor stoping and that was only because of the Moto resistance of magnets. so don’t think I over tightened the belt. Was following Enertion video on belt tension.

the belts stayed in the middle on that motor pully and wheel pully if I spin it in any direction direction. Will have a dig around for alignment on the forum again but the surch engin is not as powerful as people keep saying. The other belt (the one that’s not had a motor load on it yet) drifts in a direction depending on witch way you spin it only thing i’v found on that is to do with the strands of reinforcement inside the belt. The thing is I’m ripping teeth off not wereing out the belt from one side as I’ve seen on cars. So I don’t think it’s alinmet but worth checking again.

The belt is undersized but I was worried on space for my first build and believed alien when thay said it’s the right size. Less than a mile is just crap for any belt with out a lot of friction.

I think the motor pully might be to small and bending the belt to much as I have read minimum 15 teeth on one post but was trying to avoid a top speed over 30mph to start with.

@linsus Thinking to tight so might try the othe one a bit loser see how long it takes to shreds.

Oder new wheel pullys and 12mm belts see how that goes hoping the replacement Vesc turns up soo witch will help as well.

If that still self destructs new 15mm motor pullys and belt and hope there’s no drift of the belt as therese only so many speed rings you can put on and still have it’s locknut work. 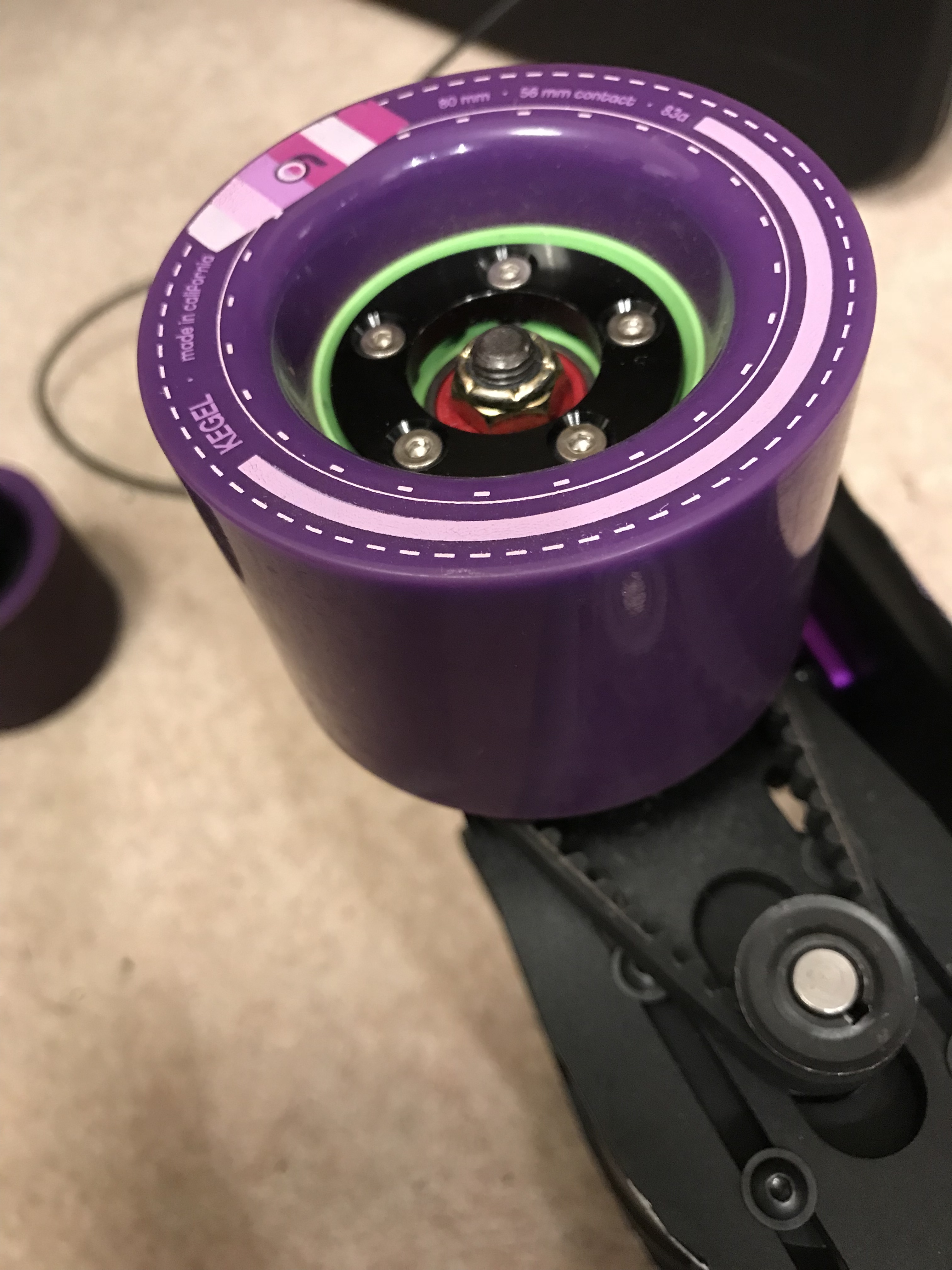 Send out a custom bms (it’s not the best tech one I thought thay would send) and still can’t tell me any spec or how to wire it had to read up on circuit boards and follow the pcb tracks. To work out + to battery 10

Scramboards are a rip-off and charge you after thay send out tested stuff that doesn’t work.

Street wing v helpful with advice and sending a spark switch back for them to check after I was unable to get the voltage thro it we see how that goes but I’m hopeful. I would recommend them

Esk8 and Enertion are the only other ones I’ve found but not tried yet in the EU not sure on any more in UK any one els for suppliers of parts?

Are the motor pulleys steel or aluminium? My first esk8 was single 6355 with APS 15T/32T aluminium pulleys (Kegel wheels) and 9mm belt.

The drivetrain ate belts for breakfast. Every week I needed 1-2 new belts. 1-2 days after switching the belt no more hill climbing or braking possible.

Check the teeth of your pulleys, do the edges feel sharp? Because they shouldn’t at all. My whole APS set was very expensive but sharp from day one.

The Raptor 1 had a 10s3p and 9mm belts, they are perfectly fine on a dual set up. On a single set up they don’t work so well.

I personally use 12mm belts and I can get my wheels to skid and I never skip teeth.

Steel and a little compared to all the other teeth on the wheel pully and spare 15t pully I have.

Up date more tension (tiny bit of stretch on the belt) solved the issue with a little bit of sanding the motor pully 5 miles later on the second pully belt looks in grate shape. 12mm belt and 15mm wheel pullys arrived just about to install them with the replacement VESC so back to dule set up.